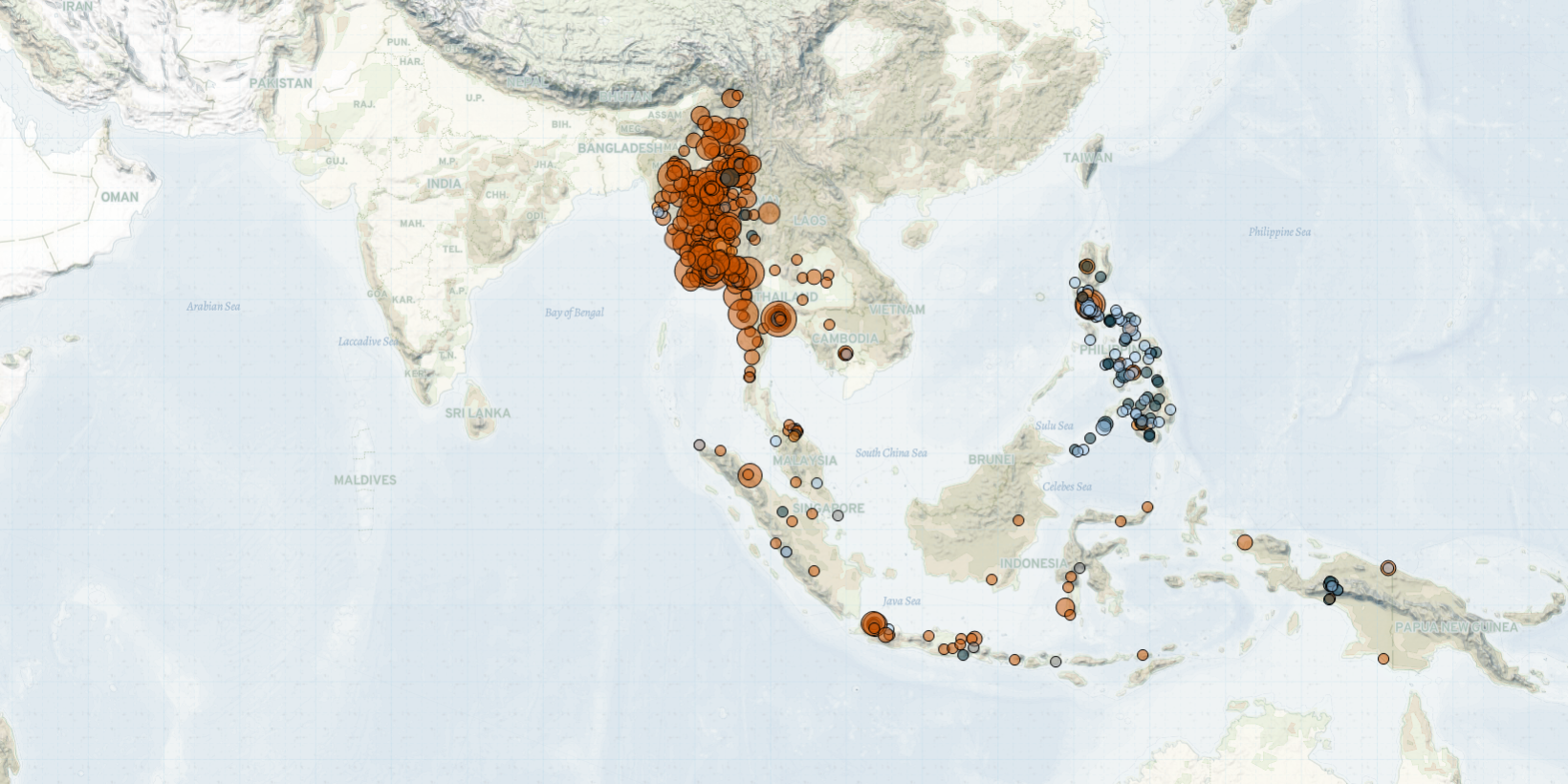 Last week in Southeast Asia, demonstrations erupted all across Myanmar in opposition to the 1 February military coup d’etat. The demonstrations are part of a growing nationwide civil disobedience movement that is also calling for the release of detained leaders of the elected government. Solidarity demonstrations against the coup in Myanmar were also held in Thailand and Cambodia last week. Amid the mass demonstrations, authorities in Myanmar are increasing their efforts to suppress dissent by imposing curfews and arresting protesters and activists. Meanwhile, there was an uptick in anti-government demonstrations in Thailand following the denial of bail for four protest leaders. Lastly, in Indonesia, an increase in violence linked to separatist Papuan groups continues to cause villagers to flee their homes.

In Myanmar, following the 1 February coup d’etat, demonstration events increased drastically across the country, with more than 450 events recorded across all states and regions.1ACLED data are current as of 12 February 2021. Events related to the civil disobedience movement in Myanmar continue to be sourced and coded. Protesters took to the streets in the hundreds of thousands as part of a nationwide civil disobedience movement to oppose military rule and demand the release of President U Win Myint and State Counsellor Daw Aung San Suu Kyi (Frontier Myanmar, 8 February 2021). As the movement — which is largely driven by civil servants on strike — gains momentum, a multitude of ethnic, labor, and religious groups have joined (Reuters, 11 February 2021). Notably, police officers also participated in several such demonstrations. While demonstrations have largely proceeded peacefully, police have reportedly fired warning shots and used rubber bullets, tear gas, and water cannons to disperse protesters in some locations (Irrawaddy, 9 February 2021). One young woman was shot in the head by police during a demonstration in the capital (BBC, 12 February 2021).

The massive outpouring of opposition to the coup has prompted authorities in Myanmar to restrict freedoms — curfews were imposed in at least 30 cities alongside a ban on public gatherings of more than five people (Myanmar Times, 9 February 2021). Police have also been carrying out nighttime arrests of protesters and activists, further fueling protesters’ anger (SCMP, 14 February 2021). According to local NGO Assistance Association of Political Prisoners (AAPP), to date, at least 460 politicians, government officials, activists, and other civilians have been detained in relation to the coup since 1 February  (AAPP, 18 February 2021). Many of these arrests have been carried out at night (Radio Free Asia, 12 February 2021), and more arrests are likely to happen in the days to come with authorities amending laws to allow warrantless arrests and searches of private property (Irrawaddy, 14 February 2021). Additionally, the ongoing civil disobedience movement strikes have caused serious disruptions to the operations of government departments. In response to this, the military urged civil servants to return to work and threatened them with legal action (Myanmar Times, 12 February 2021). However, the strikes have persisted nonetheless, just as people have continued taking to the streets despite a crackdown by the state (Irrawaddy, 16 February 2021).

Meanwhile, the military pardoned more than 23,000 prisoners on Union Day (RFA, 11 February 2021). Their release coincided with the appearance of mobs creating community disturbances across Myanmar, including unverified reports of arson, smashed cars, and poisoned water tanks. These incidents have prompted residents to form night-time vigilante groups to fend off thugs (Irrawaddy, 14 February 2021). The mass pardon has sparked fears that the military is resorting to a tactic previously-used following the 1988 democracy uprising, where mobs were similarly dispatched to create chaos (BBC, 13 February 2021).

Solidarity demonstrations against the coup d’etat in Myanmar were also held in Thailand and Cambodia last week. As with the week prior, another demonstration at the Myanmar embassy involving the We Volunteer group — volunteer guards of the Thai People’s Party protest movement — turned violent when police intervened. Meanwhile, in Malaysia, the government announced that it would hand over 1,200 Myanmar nationals being held in immigration detention centers to the Myanmar military government upon the latter’s request (SCMP, 15 February 2021). Malaysia does not officially recognize refugees and claims that the Myanmar nationals had committed immigration related offenses. Concerns have been raised that those being deported might include vulnerable individuals fleeing persecution (Straits Times, 11 February 2021).

Additionally in Thailand, anti-government demonstrations increased last week following the denial of bail for four protest leaders who had been charged with sedition and royal defamation. Protesters called for the release of the detainees as well as the repeal of the lèse majesté law. This denial of bail has sparked anger among protesters, who subsequently announced that they would step up protests to increase pressure on the government. While anti-government protests have dwindled in recent weeks amid a spike in coronavirus infections in the country, the use of low-intensity home-made explosive devices, such as ping-pong bombs, has become common during demonstrations involving the People’s Party movement. Last week, a ping-pong bomb was thrown after one such demonstration, and a similar incident was recorded at the end of January. It remains unclear whether these devices are being used by the demonstrators, or people targeting the demonstrators (Bangkok Post, 10 February 2021).

In Indonesia, the government announced a proposal to carve out a new province in central Papua on the basis that it would help the development of West Papua (Jubi, 8 February 2021). The government has used the promise of increased development to rationalize West Papua’s Special Autonomy Status. Separatists and local Papuans insist that they have not benefited from such development efforts. Protests against the proposal for a new Papuan province were held last week. Protesters reiterated their calls for a referendum on independence and expressed concern that the creation of a new province would further complicate the resolution of human rights violations in the two Papuan existing provinces (Jubi, 8 February 2021).

Meanwhile, also in Papua province, clashes between the separatist West Papua National Liberation Army (TPNPB) and state forces persisted alongside an increase of attacks on civilians by the rebel group. In Bilogai village, Intan Jaya regency, a rebel shot a shop owner while pretending to be a customer, while in neighboring Puncak regency, a motorbike taxi driver was stabbed to death by a group of rebels. As a result of these recent attacks, 650 villagers in Bilogai and its neighboring villages have fled their homes and are seeking shelter at Catholic churches (HumanRightsPapua, 10 February 2021). It was also reported that the instability in the region has prevented the government from carrying out administrative work in the region as government personnel have not dared work from  the regency administration office in Sugapa since the beginning of this year (Kompas, 9 February 2021).