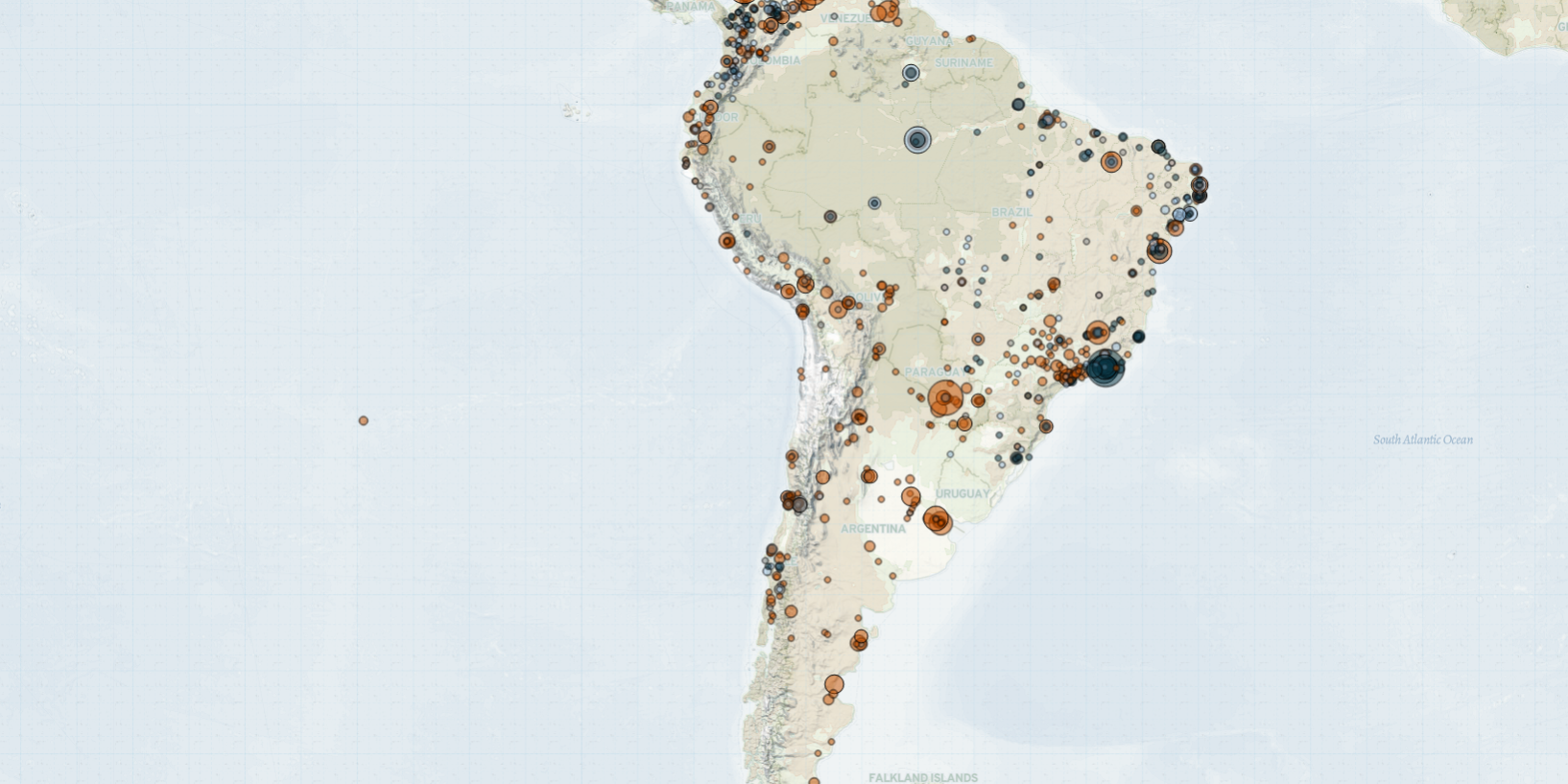 Last week in South America, the final results of the presidential elections in Ecuador led to large protest marches by indigenous groups in support of the defeated indigenous candidate. In Argentina, nationwide demonstrations against gender-based violence were once again reported following a femicide. Fighting between armed groups and state forces intensified in Colombia, with the Gulf Clan involved in several clashes across the country. In Paraguay, disputes between drug trafficking groups inside a prison led to the deaths of at least seven inmates. Similarly, in Brazil, drug trafficking disputes continue to take place in states such as Roraima and Rio de Janeiro. Meanwhile, demonstrations related to the coronavirus decreased across the region, although labor groups continue to call for the reopening of the economy in countries like Brazil and Peru.

In Ecuador, a partial recount of votes for the presidential elections confirmed the conservative Guillermo Lasso will move on to the second round, facing off against left-wing economist Andrés Arauz. While Arauz easily secured 32.6 percent of votes and a place in the second round, the other spot was being disputed by Lasso and the indigenous environmental activist Yaku Pérez (Al Jazeera, 14 February 2021). The defeat of Pérez was followed by a large protest march led by indigenous groups, starting in Loja city and moving towards the capital, Quito El Comercio, 15 February 2021). Yaku Pérez and his supporters demand a second recount of the votes on the grounds that Lasso went into the second round with a small margin (19.74 percent) relative to Pérez’s results (19.38 percent) (El Universo, 20 February 2020).

In Argentina, demonstrations were reported across the country against gender-based violence after a young woman was killed by her boyfriend in Rojas city, in Buenos Aires province. The protests were called by the organization Not One [Woman] Less (Ni Una a Menos, in Spanish). They called for improvements in policies to fight gender-based violence and to guarantee women’s access to justice. The femicide case got people’s attention not only because the victim’s boyfriend was a police officer, but also because she had previously filed at least 18 complaints against him yet no effective action had been taken by authorities (La Nación, 9 February). Several groups also called attention to the rise in the number of femicide cases during the coronavirus pandemic in the country (La Capital, 10 February; El Diario de Carlos Paz, 17 February 2021).

Meanwhile, fighting between armed groups and state forces increased by twofold in Colombia last week compared to the previous week, with clashes happening in at least seven departments. In Nariño department, two police officers and one attacker from an unidentified armed group died in an armed clash in the Chiles rural area (El Tiempo, 17 February 2021). Several clashes between the Gulf Clan and state forces were also reported in Antioquia and Sucre departments. Additionally, Gulf Clan members engaged in a shoot-out with members of the National Liberation Army members (ELN) in the rural area of Alto Baudó municipality in Chocó department. The clash resulted in the death of an indigenous Embera woman who was caught in the crossfire (Infobae, 19 February 2021). Authorities believe that the intense fighting reported recently in the country is connected to the death of a high-ranking member of the Gulf Clan who was killed in a military raid in Chocó department on 7 February (Infobae,7 February 2021; El Nuevo Siglo, 22 February 2021).

In Paraguay, prisoners in Tacumbú penitentiary in the capital Asunción set fire to mattresses to show their opposition to the transfer of a Rotela Clan prisoner to another penitentiary. The prisoner was transferred as he was allegedly planning an escape. He likewise continually trafficked drugs and other objects inside the prison. The event led to clashes between inmates from the Rotela Clan, a Paraguayan criminal group, and the rival Brazilian First Capital Command (PCC). At least seven inmates were killed – six of them by melee weapons such as spears, knives, and machetes, which some prisoners had access to (Ultima Hora, 17 February 2021). Prison guards were held as hostages leading to the intervention of police, who fired rubber bullets to control the clashes. The event led to the intervention of the Justice Minister, who agreed to their demands of equality between Paraguayan and Brazilian prisoners (La Nación, 16 February 2021; ABC, 17 February 2021). Disputes between the groups are frequent inside prisons; in June 2019, ten Rotela Clan members were killed following a clash with the PCC in San Pedro penitentiary (RDN, 15 August 2019).

The inability of Paraguay’s institutions to enforce the rule of law and tackle crime has attracted Brazil’s largest drug trafficking group: the PCC. The group now has significant operations in the tri-border area of Brazil, Paraguay, and Argentina (InsightCrime, 12 February 2020). In recent years, the group has sought to take control of the Paraguayan penitentiary system to expand its operations in the region (InsightCrime, 11 December 2020). The prison clash between the Rotela Clan and PCC members could lead to increased clashes and attacks in the border region, with effects spiraling into Brazil.

In Brazil, intense territorial disputes between drug trafficking groups continued to be reported across the country. In the city of Boa Vista, Roraima state, at least 11 people were killed since 9 February, and another five were injured in several events motivated by a territorial dispute between rival drug trafficking groups. Most victims were of Venezuelan nationality and the modus operandi of the attacks were similar in all events (Folha de Boa Vista, 17 February 2021). Meanwhile, in Rio de Janeiro, in the Praça Seca neighborhood, West Zone of the city, intense shoot-outs continued to be reported for several days in a row. The area has been at the center of a territorial dispute between the Red Command (CV) and local militia groups for a decade (Extra, 23 August 2020). Both groups aim to gain control of the drug trafficking in the region (G1, 18 February 2021). It has been reported that the CV has regained control of the Morro do Barão community (Crimes News RJ, 19 February 2021).

Meanwhile, demonstrations related to the coronavirus pandemic were reported in the region last week, although at lower levels compared to the previous week. In Brazil, businesses workers and parents of teachers demanded the re-opening of non-essential businesses and schools, which were shutdown once again in several municipalities due to the significant increase in reported coronavirus cases. Similarly, in Peru, hundreds of businessmen took to the streets in the cities of Arequipa and Tacna in protest against the total lockdown introduced in February in several regions of the country (Diario Correo, 13 February 2021; Diario Correo, 15 February 2021). According to projections from the International Monetary Fund (IMF), the region of Latin America and the Caribbean experienced a contraction of 7.4 percent in 2020, making it one of the regions in the world most economically impacted by the pandemic (Americas Society-Council of the Americas, 10 February 2021).