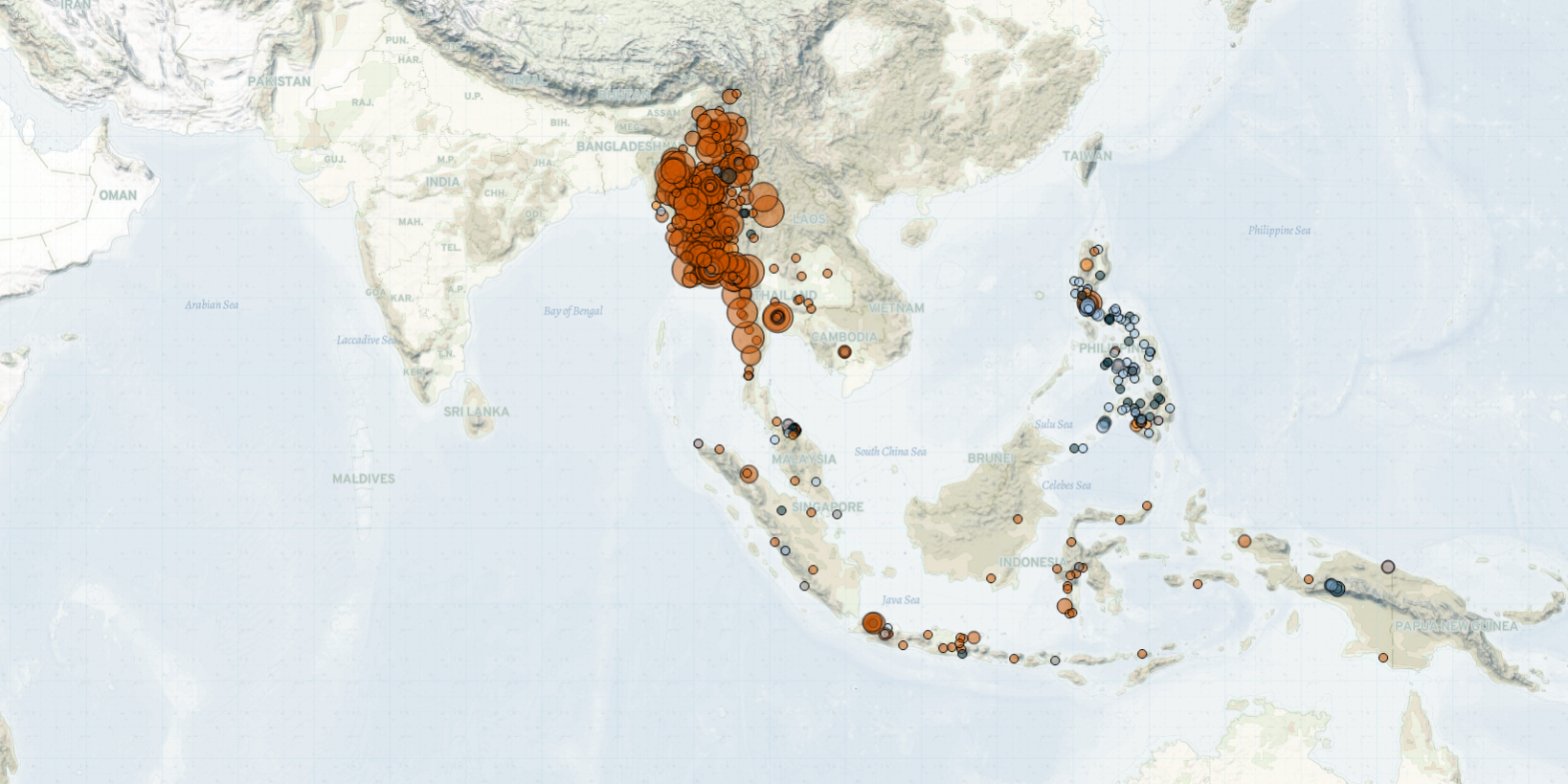 Last week in Southeast Asia, demonstrations against the military coup in Myanmar continued unabated as support for the civil disobedience movement continues to grow. Notably, some ethnic armed organizations (EAOs) have also voiced their support for the movement and offered protection to demonstrators. Additionally, in Shan state, Myanmar, fighting between rebel groups locked in a territorial dispute was particularly deadly. Meanwhile, separatist violence increased in Indonesia. More villagers in West Papua, Indonesia have been displaced as a result of this, and authorities have also imposed a curfew in the affected areas. Similarly, separatist violence in Thailand’s deep south continues to increase despite recently-resumed peace dialogues between the state and rebel groups. Elsewhere in Thailand, there was an uptick in anti-government demonstrations as protesters called for the release of protest leaders and condemned the use of force by police against demonstrators. Lastly, in the Philippines, a police raid of an indigenous Lumad refugee school sparked protests and condemnation by advocacy groups.

In Myanmar, demonstrations against the military coup continued unabated last week, with several hundred events recorded across all states and regions and daily protests taking place in several major cities. In the face of the overwhelming show of opposition by demonstrators, the military deployed troops and tanks to major cities, raising widespread international concern over an impending violent crackdown by the state (Al Jazeera, 14 February 2021). In a further attempt to stifle dissent and disrupt organizing, the military has also imposed nightly internet cuts between 1 a.m. and 9 a.m. starting from 15 February (NetBlocks, 31 January 2021). Notwithstanding this, people continue to gather in the hundreds of thousands to express their opposition to military rule and to call for the release of President U Win Myint and State Counsellor Daw Aung San Suu Kyi (Al Jazeera, 17 February 2021). Protesters also deployed creative non-violent tactics to disrupt the arrival of troops in the cities, including a “broken-down car campaign” where they stalled their vehicles on roads to obstruct the flow of traffic (Reuters, 17 February 2021). As authorities continue to carry out nighttime arrests — when curfews are in place in many major cities — targeting protesters (CNN, 20 February 2021), demonstrators are also increasingly calling for the release of those who have been detained for protesting or expressing dissent.

While demonstrations have continued to proceed peacefully on the whole, there has been an increase in the level of force used by security forces against protesters. Security forces reportedly used tear gas, water cannons, and slingshots to disperse protesters (Channel News Asia, 15 February 2021). Several protesters were injured last week when police fired bullets into the crowds. A total of about 40 shots were fired during a protest in Mandalay district on 17 February, though it was not clear whether live ammunition or rubber bullets were used. Similar incidents were reported elsewhere (RFA, 17 February 2021).

Notably, EAOs have also thrown their support behind the civil disobedience movement. Last week, troops from the Karen National Union/Karen National Liberation Army (KNU/KNLA) were present at several protests in Kayin state to provide security to protesters (Irrawaddy, 24 February 2021). While police forces were also present at some of these protests, no intervention from either side took place and the protests proceeded peacefully. The presence of KNU/KNLA troops at these protests comes on the heels of a statement where the rebel group declared its support for the anti-coup protesters and offered to protect them (Karen News, 17 February 2021). Previously, in a 2 February statement, the KNU/KNLA along with other EAOs that had signed the Nationwide Ceasefire Agreement (NCA) condemned the military coup, while expressing their intention to continue to abide by the NCA (BNI, 3 February 2021). However, on 20 February, the same group of EAOs declared that they would cease all peace negotiations with the military and throw their support behind the civil disobedience movement to oppose the military coup, thereby effectively suspending the NCA during military rule (BNI, 22 February 2021; Irrawaddy, 24 February 2021).

Elsewhere, in Shan state, Myanmar, fighting between the Restoration Council of Shan State/Shan State Army-South (RCSS/SSA-S) and joint forces of the Palaung State Liberation Front/Ta’ang National Liberation Army (PSLF/TNLA) and the Shan State Progress Party/Shan State Army-North (SSPP/SSA-N) was particularly deadly. At least 21 fatalities were recorded from last week’s clashes, including at least three civilian fatalities. An ambush of RCSS/SSA-S troops by the SSPP/SSA-N resulted in the reported deaths of 18 RCSS/SSA-S fighters. The increase in fighting — which comes days after the PSLF/TNLA and RCSS/SSA-S both declared unilateral ceasefires (SHAN, 17 February 2021) — has displaced more than a thousand civilians in Hsipaw, Kyaukme, and Namtu Townships (Shwe Phee Myay News Agency, 18 February 2021).

Meanwhile, violence linked to separatists increased in West Papua, Indonesia and the deep south of Thailand. In Papua province, Indonesia, an increase in ongoing violence involving the separatist West Papua National Liberation Army (TPNPB) prompted authorities to impose a curfew in Intan Jaya regency, where such violence has predominantly taken place in recent weeks (Kompas, 18 February 2021). For the second week in a row, rebels attacked and wounded a shop owner, though the motive of these attacks has yet to be ascertained. Meanwhile, the Indonesian military shot dead three Papuan youth while pursuing TPNPB rebels after a clash in Sugapa district, Intan Jaya. While the military claims that the victims were TPNPB members, local sources insist that they were civilians. Human rights groups have since called for an investigation into the incident (Amnesty International, 18 February 2021). Following this, hundreds more villagers fled their homes to seek shelter at Catholic church facilities, bringing the current number of IDPs in Intan Jaya regency to about 1,000 (Kompas, 18 February 2021).

In Pattani and Narathiwat provinces in Thailand, an uptick in violence was recorded over the weekend as Malay-Muslim separatists fought with state forces and targeted them with explosives such as grenades and IEDs. While no fatalities were reported, at least two rangers were wounded from the blasts. Separatist violence in the deep south declined last year after the rebels announced a de facto ceasefire in light of the coronavirus pandemic (Benar News, 4 April 2020). However, bombings and arson attacks by the rebels started to rise again in December 2020, thereby providing a new impetus for the resumption of peace talks between Thai authorities and the main separatist group, the Barisan Revolusi Nasional Melayu Patani (BRN). While a virtual meeting between the two sides was held early this month in preparation for more formal negotiations (Benar News, 3 February 2021), nonetheless, instability in the deep south has continued to rise in recent weeks.

Also in Thailand, there was an uptick in anti-government demonstrations following clashes between police and demonstrators in Bangkok on 13 February, during which police reportedly assaulted a medical volunteer (Bangkok Post, 14 February 2021). While demonstrators continue to reiterate their three key demands — a new charter, the prime minister’s resignation, and reforms to the monarchy — they also called for the release of protest leaders who were denied bail and condemned the police crackdown on 13 February. The increase in demonstrations also comes amid debates in parliament on a no-confidence motion against Prime Minister Prayut Chan-o-cha, which he eventually survived (Straits Times, 21 February 2021).

Finally, in the Philippines, a police raid of indigenous Lumad students sheltering at a Catholic university in Cebu city sparked protests and widespread condemnation by activists and academics. While the police claim that the raid was a “rescue operation” of Lumad youth being held captive and indoctrinated by communist recruiters, the hosts and welfare authorities stated that the students were receiving proper care and education (Philstar, 16 February 2021). The government has long alleged that communist rebels have been carrying out recruitment drives through Lumad schools and has used this as a pretext to shut down such schools around the country. However, the Save Our Schools Network — an organization that had been working closely with the Lumad youth — says that the government’s actions have only deprived thousands of indigenous children of education (Al Jazeera, 16 February 2021). The raid is considered to be the government’s latest effort in its ongoing campaign against leftist organizations, which the government often vilifies as ‘communist’ in a practice known as ‘red-tagging’. Protests against the raid were reported in Manila and Quezon city.