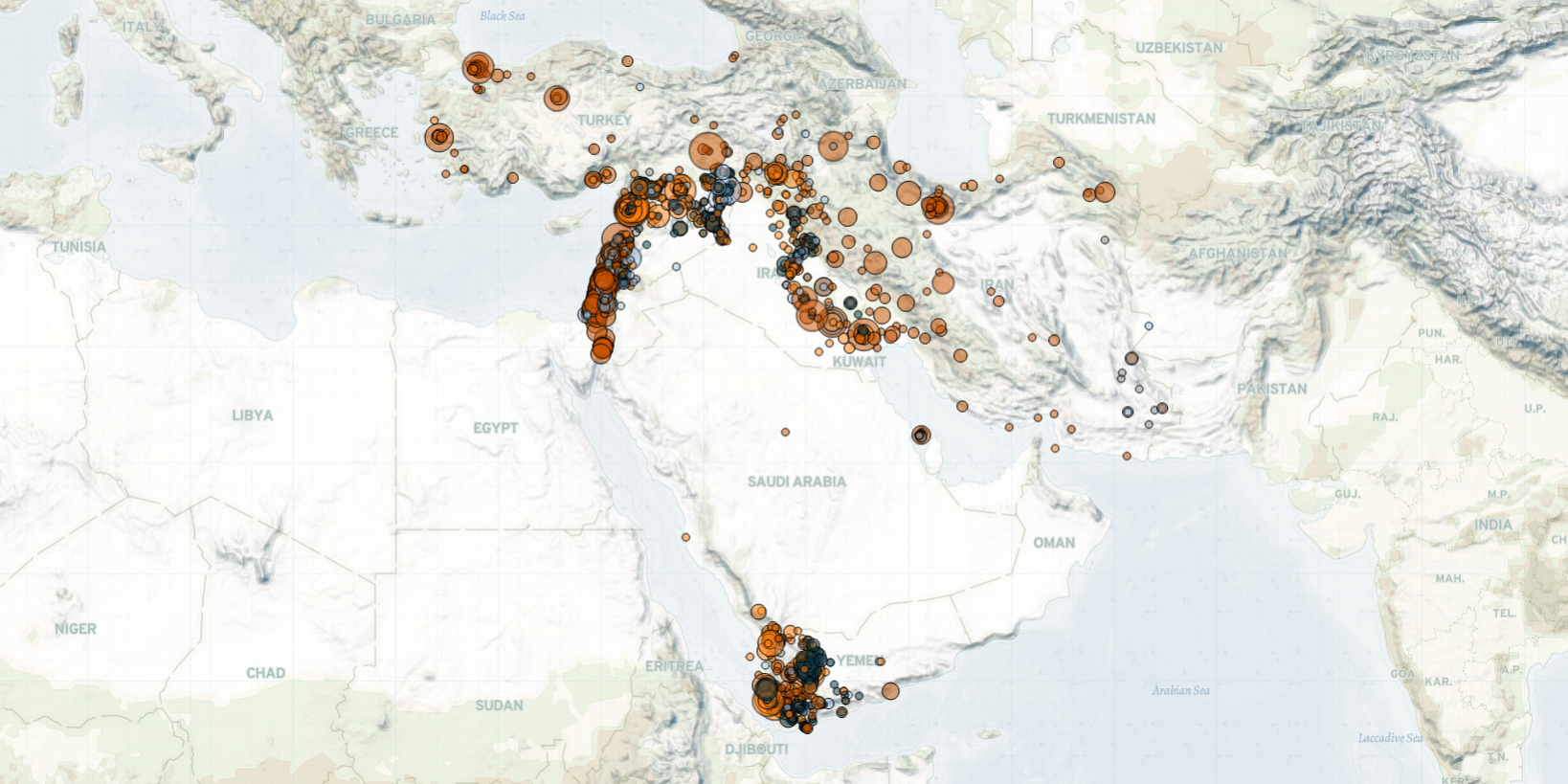 Last week in the Middle East, clashes continued between pro-Hadi and Houthi forces in Yemen, with the Houthis intensifying their offensive towards Marib City. In Syria, US forces carried out airstrikes targeting positions of Iranian-backed groups in response to attacks against US and coalition personnel in Iraq. Meanwhile, violent demonstrations broke out in Nassriya city in Iraq against the governor, spreading to other cities after several demonstrators were killed. Unrest erupted also in Iran last week, after several fuel smugglers were killed by security forces in Sistan and Baluchestan province. Elsewhere in the region, a demonstration by Arab citizens of Israel against organized crime turned violent after police tried to forcefully disperse a peaceful march. Lastly, Palestinians in refugee camps in the Gaza Strip protested against planned cuts to the United Nations Relief and Works Agency’s (UNRWA) food aid.

In Yemen, the Marib governorate saw significant fighting between 20 and 26 February as Houthi forces continued their offensive targeting Marib City. The vast majority of military clashes occurred in the Sirwah district, though a significant number of clashes also occurred in the Medghal and Raghwan districts. Houthi forces captured a number of locations in the Sirwah district, including Jabal al Balaq Al Qibli approximately 10 kilometers from Marib City (Twitter, 26 February 2021), even though control of the location changed on a daily basis during the following days (Twitter, 1 March 2021). The military campaign appears to have been costly for Houthi forces. Reports emerged that Houthi officials have embarked on large-scale mobilization campaigns in the Dhamar, Ibb, and Taizz governorates to recruit new fighters and to send them to military fronts in Marib in an effort to reinforce positions and military forces that have incurred significant losses during the offensive (Aden al Ghad, 23 February 2021).The Al Jawf and Hodeidah governorates also saw a significant number of clashes between pro-Hadi and Houthi forces. Pro-Hadi forces captured territory in the Al Hazm district, including the entirety of the Al Jadafir area (Al Masdar, 25 February 2021), even though this was denied by pro-Houthi sources (Twitter, 26 February 2021). A large number of clashes also occurred in Hodeidah’s Ad Durayhimi and Hays districts; however, the frontlines remained static throughout last week without either side making any gains.

In Syria, the US Air Force, operating under the Global Coalition, carried out airstrikes targeting 11 positions of the Popular Mobilization Forces’ (PMF) Imam Ali Brigades and the Iraqi Kataib Hezbollah (KH) in Al Bukamal border-crossing with Iraq in Deir-ez-Zor. It came in response to repeated rocket attacks on US and Coalition personnel in Iraq, including the Erbil attacks two weeks ago. The airstrikes killed at least 22 members of the groups and destroyed structures and a weapons shipment recently transferred from Iraq. This was the first military strike ordered by US President Joe Biden since his inauguration (BBC, 26 February 2021). Elsewhere in Syria, Russian warplanes carried out airstrikes on areas in Jabal Al Zawiya in Idleb and on the Kabani front in Lattakia.

In Iraq, rioters and police clashed in Nassriya city, with rioters demanding the resignation of the governor. The Iraqi government dismissed the governor, but the rioters did not accept his replacement. Eight rioters were killed during the clashes, including a 16-year-old, with 180 more injured. In response to the deadly violence, demonstrations erupted elsewhere across the country in Kut, Diwaniya, Kerbala, and As Samawah cities and in the towns of Qalat Sukkar and Shatra of Thi-Qar province (Reuters, 26 February 2021). Elsewhere in Iraq, unknown militants targeted the Green Zone in Baghdad city with Katyusha rockets on 22 February. The attack did not result in any fatalities though did cause material damage to vehicles (Al Mirbad, 22 February 2021).

Elsewhere in the region, unrest erupted in Iran’s Sistan and Baluchestan province. The unrest comes after forces of the Islamic Revolutionary Guard Corps (IRGC) killed and injured multiple fuel smugglers as they attempted to drive through a barrier set up to block a smuggling route into Pakistan (Washington Post, 23 February 2020). Angry fuel porters then tried to storm a military base, where they were met with live fire. Violence spread across the province in the subsequent days, with violent demonstrations staged in Zahedan, Khash, Iranshahr, and Suran. In Saravan, demonstrators attacked the district governor’s office and set police cars on fire. In Kurin and Qaleh ye Bid, armed rioters attempted to storm police stations, resulting in fatalities among both rioters and security forces. As unrest gripped the province, the mobile data network was reportedly shut down by the government for at least three days (VOA, 27 February 2021). Sistan and Baluchestan is the scene of occasional clashes between Iranian security forces, militants, and separatist groups, as well as arms and drug traffickers. Economically deprived fuel smugglers, who travel between Iran and Pakistan to sell fuel for meager sums, frequently fall victim to security forces’ shootings in the border area (Amnesty International, 2 March 2021). Lack of employment opportunities in the province has left the ethnic Sunni Baluch minority with few alternatives but to engage in unlawful cross-border trade with Pakistan (Human Rights Watch, 25 February 2021).

In Israel, violence broke out in Umm el Fahm during the seventh consecutive week of mass demonstrations by Arab citizens against violence and organized crime in the country. Police reportedly fired rubber bullets, tear gas, water cannons, and stun grenades at an initially peaceful march, injuring 35 demonstrators. Eleven of them were hospitalized (Times of Israel, 26 February 2021). Police noted that eight officers were also lightly injured after a group of demonstrators hurled rocks at them (Jerusalem Post, 26 February 2021). The Justice Ministry has launched an inquiry into the police officers’ conduct amid allegations of brutality against demonstrators, including shoving a woman into traffic and beating and kicking people as they lay on the ground (Times of Israel, 28 February 2021). Accusing police of racist behavior, Arab Israeli leaders have called on the community to continue weekly demonstrations against organized crime, as well as police conduct (Asharq Al-Awsat, 28 February 2021).

Lastly, in Palestine, several demonstrations were held in the Gaza Strip against cuts to UNRWA services and its decision to implement a unified food basket system for all beneficiaries. UNRWA previously divided Palestinian refugee families into two categories, with the more economically deprived group receiving a larger food aid package. The agency has announced now that in order to help an additional 6,000 people who “have lost their livelihoods under the economic blockade and the circumstances resulting from the corona pandemic,” it will distribute smaller food baskets (Media Line, 23 February 2021). But several Palestinian organizations are warning that the reduction of food aid will have “disastrous repercussions” on the refugees who are already struggling with meeting their basic needs (Middle East Monitor, 24 February 2020).