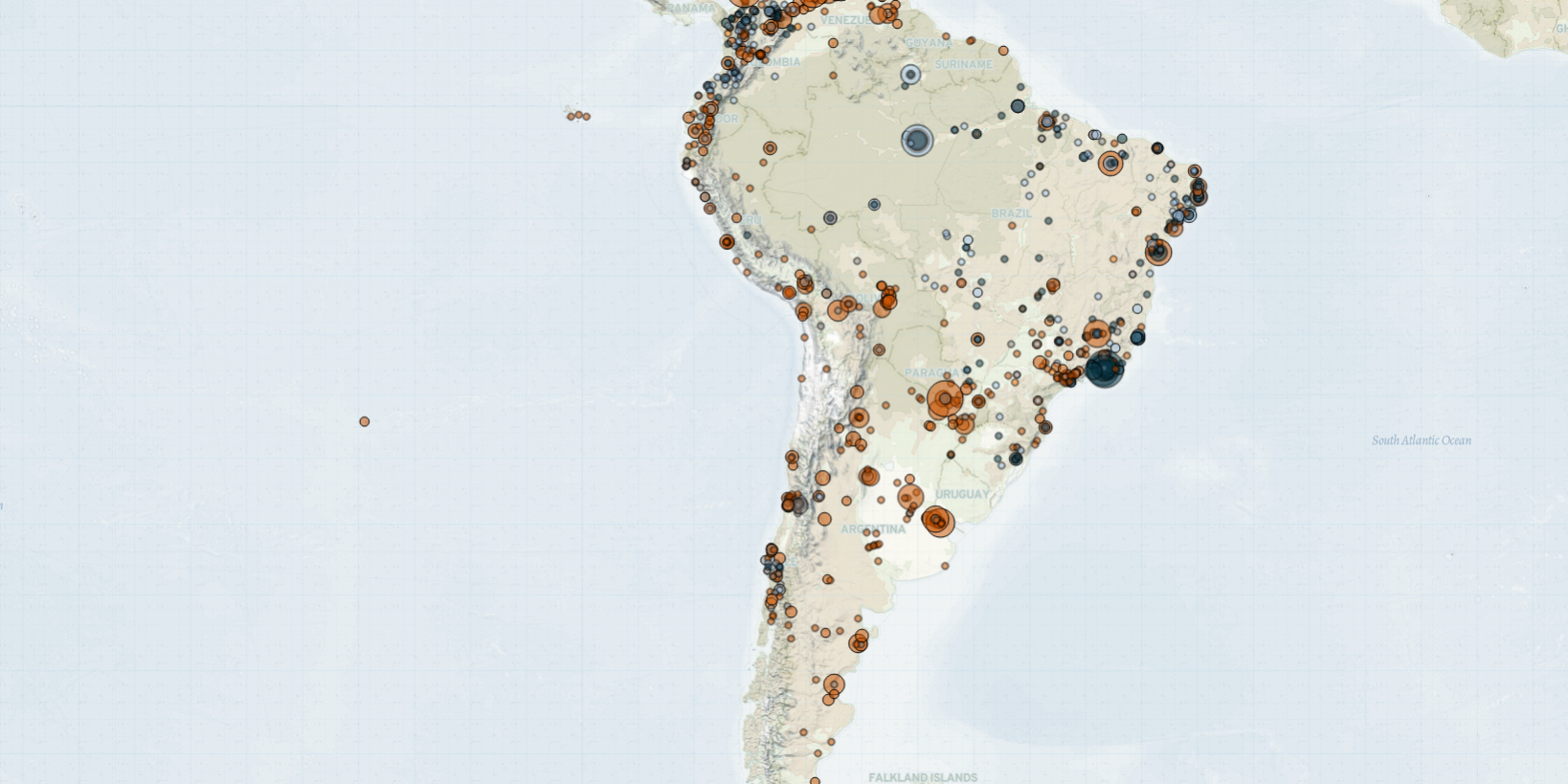 Last week in South America, protests against gender-based violence continued to take place in Argentina and Venezuela amid high femicide rates. Violence derived from disputes between armed groups and Revolutionary Armed Forces of Colombia (FARC) dissidents continues to take place in Colombia. In Brazil, protests were held against President Jair Bolsonaro amid the coronavirus crisis. Meanwhile, violence against civilians was registered in the context of transnational drug trafficking in the country as well.

In Argentina, protests against gender-based violence continued to take place as new cases of femicide arose in the country. Thousands of women marched through the streets in the capital city of Buenos Aires, carrying posters of men accused or convicted of femicide (Al Jazeera, 24 February 2021). The mass demonstration was triggered by the killing of Úrsula Bahillo, on 8 February, by her ex-boyfriend, who is a police officer. Women’s rights advocates claim that Bahillo’s case has shed light on the state’s failure to protect women. The victim had filed several police complaints against the perpetrator, but a restraining order was never enforced (El País, 11 February 2021). Since the killing of Bahillo, more cases of femicide have been reported across the country. Since 2015, Argentina has been the epicenter of massive street demonstrations under the slogan Not [One] Women Less (Ni Una Menos, in Spanish). The group placed the issue of gender-based violence on the public agenda in Latin America and called for the enactment of laws (La Nación, 9 February).

Likewise, in Venezuela, hundreds of citizens protested against femicide, following the killing of three women in the Portuguesa state (El Nacional, 25 February 2021). Protesters chanted for justice and carried signs that read Not [One] Women Less (Ni Una Menos, in Spanish). Additionally, a group of Yukpa indigenous women, supporters of Nicolás Maduro’s regime, carried out an attack against the facilities of a radio station in Zulia state. The group sought to hinder the participation of three Popular Will politicians on the radio program (El Pitazo, 26 February 2021). The Popular Will is Venezuela’s main opposition party, created in 2009, and led by Juan Guaidó since 2011. The party was formed in reaction to infringement on human rights and individual freedoms during Hugo Chávez’s administration. After Chávez’s death in 2013, Nicolás Maduro took over the presidency as his successor, and opposition shifted towards Maduro’s increasing autocratic rule.

Meanwhile in Colombia, at least 11 people were killed in the city of Tumaco, Nariño department, in different events through 20 and 21 February. The events happened in the context of ongoing disputes between FARC dissidents of the Oliver Sinisterra front and a local drug trafficking group, Los Contadores (El Espectador, 22 February 2021). Since 2018, both groups have been clashing over drug trafficking routes and illegal mining operations in the Nariño department. Los Contadores is made up of FARC dissidents from the Ivan Rios front and former paramilitaries from the United Self-Defense Forces of Colombia (AUC) (Colombia Reports, 23 February 2021).

In Brazil, protests against President Jair Bolsonaro were reported in several cities. The demonstrations were coordinated and supported by social groups, political parties, and labor unions. Protesters demand the purchase and distribution of a new coronavirus vaccine in the country, as well as Bolsonaro’s resignation or impeachment due to his mishandling of the pandemic. Since the beginning of the pandemic, the president has opted for a hands-off approach to the health crisis, due to his skepticism of the threat of the coronavirus (UOL, 15 February 2021).

Lastly, in the city of Coari, Amazonas state, a local drug trafficking and pirate group known as Family of Coari (Família de Coari, in Spanish), shot and killed a civilian. The group has ties with the First Capital Command (PCC) and is part of the group’s coalition known as Narcosur. The city of Coari has become PCC’s standing point to gain control of the drug trafficking routes in the Amazon Basin (Amazônia, 28 September 2018). The PCC is present in every state of the country and has surmounted a significant number of its domestic rivals (Americas Quarterly, 27 April 2020). Moreover, the group conducts operations throughout the whole continent, and has an increasing global presence, forming alliances with organized criminal groups. In an attempt to manage the extension of its partnerships, the PCC helms a group called Narcosur, which is a powerful confederation of transnational organized crime groups. The aim of the coalition is to link cocaine producers in Bolivia, Colombia, and Peru, and to transport products to European ports (Americas Quarterly, 27 April 2020).