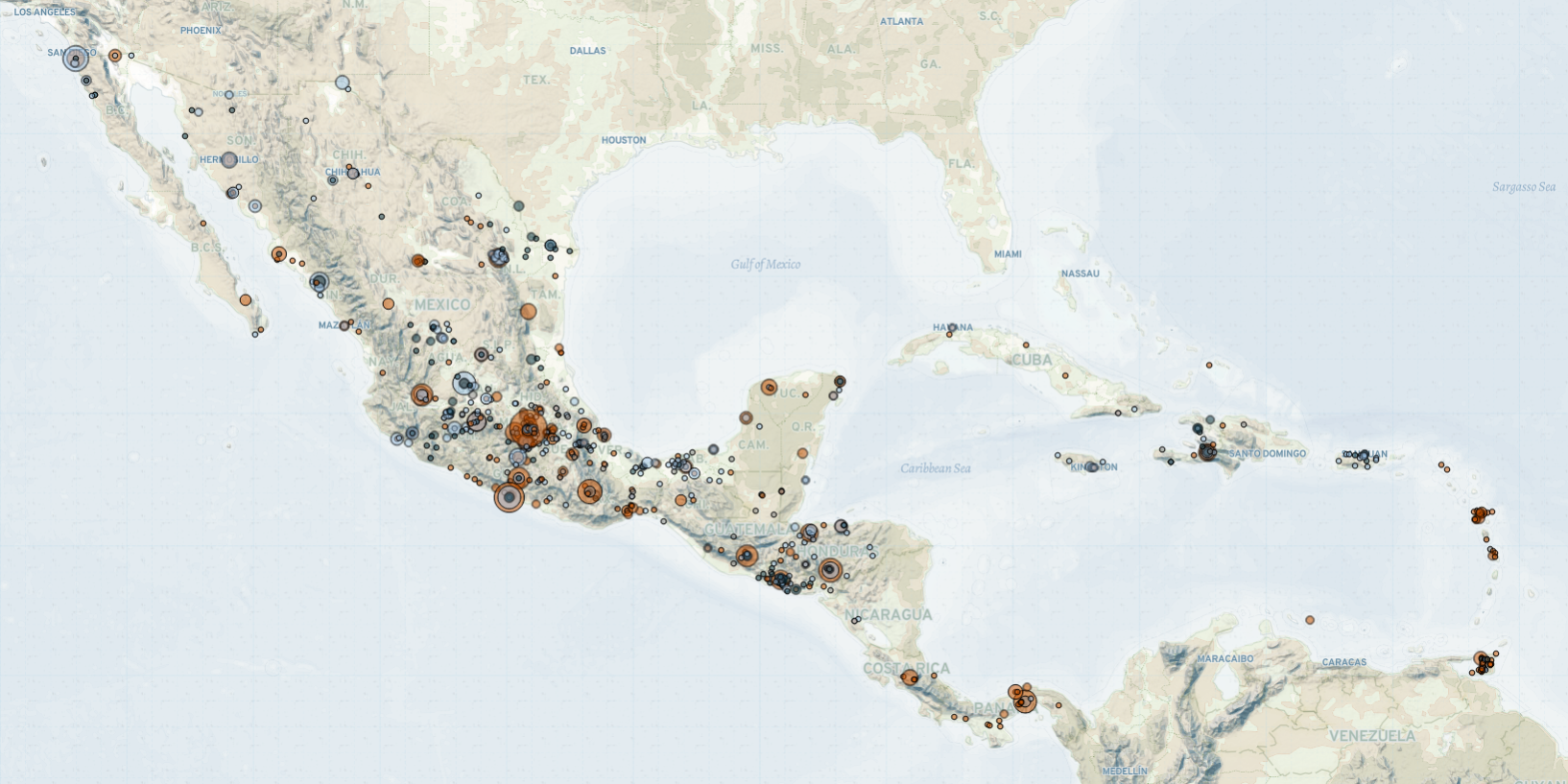 Last week in Mexico, Central America, and the Caribbean, demonstrations remained high as thousands of women mobilized against gender-based violence on International Women’s Day on 8 March across a number of countries. A significant number of demonstration events were recorded in Mexico, with violent clashes with law enforcement reported across the country. In Guatemala, women protested in at least five provinces. Elsewhere in the region, direct attacks targeting politicians continued last week in Honduras, with the killing of at least three political actors or relatives of politicians in the week leading to primary elections. In addition, two members of the Garifuna community were killed by armed men, a week after the killing of a leader and two members of the indigenous group. Lastly, in Guatemala, civil society and members of indigenous communities protested against the lack of transparency in the election of members of the Constitutional Court.

On the occasion of International Women’s Day, demonstrations around gender-based violence and women’s rights were held in Costa Rica, El Salvador, Guatemala, Haiti, Honduras, Mexico, Puerto Rico, and Trinidad and Tobago. They account for nearly half of all demonstrations in the region last week. In Latin America and the Caribbean, at least 25% of women are victims of physical or sexual violence in their lives (United Nations, 9 March 2021).

In Mexico, women gathered across the country against gender-based violence, high rates of femicides and the impunity enjoyed by perpetrators, as well as the criminalization of abortion. Over 20% of these demonstrations was violent. In Mexico City, demonstrators threw firecrackers, hammers, and Molotov cocktails against a fence erected by law enforcement outside the national palace to prevent unrest. At least 62 police officers and 19 people were injured in clashes between demonstrators and law enforcement. This echoes an increase in violent demonstrations involving women’s groups in the country. Violent demonstrations nearly tripled in 2020 compared to 2019 from at least 12 to 33 recorded events. Such an increase was likely influenced by the worsening of domestic and gender-based violence during coronavirus lockdowns (Global Citizen, 22 July 2020). The severity of the issue was downplayed by the Mexican government, which voted against a shelter program for women victims of violence in July 2020 budget cuts (The Guardian, 22 July 2020). More recently, the president of Mexico has supported Félix Salgado Macedonio’s candidacy for governorship in the National Regeneration Movement (MORENA) party primary elections, despite his involvement in several cases of rape and sexual abuse (Milenio, 9 March 2021). In turn, authorities have increasingly labelled the women’s rights movement as violent, despite law enforcement’s repression of women participating in demonstrations through arbitrary detentions and the use of sexual violence against them (Amnesty International, 3 March 2021).

In addition, tensions between demonstrators and anti-abortion groups were reported in Morelia and Villahermosa. Anti-abortion groups were seen near cathedrals and temples to protect religious buildings. In Morelia, both groups threw objects and pushed each other, illustrating the polarization of Mexican society around the right to abortion. Although abortion is legal in only two out of 32 federal entities, in 2020 support for abortion rose to 48% from 29% in 2019 (Reuters, 11 January 2021). This change in opinion is not reflected in the positions of some deputies of the Congress of Quintana Roo, who walked out of a voting session on the decriminalization of abortion in the state earlier in February (Infobae, 25 February 2021).

Similarly, in Guatemala, women protested against gender-based violence in five provinces. Violence against women is the most committed crime in Guatemala (Swissinfo, 11 March 2021). Between January and February 2021, the number of complaints filed for domestic violence and violence against women rose by over 18% compared to the same time period in 2020 (Swissinfo, 11 March 2021). Only a small number of femicides in Guatemala are ever prosecuted, both due to underreporting and a weak judicial system (BTI Project, 2020).

In Honduras, violence against political figures and their relatives increased last week, with at least three incidents reported. In the Comayan department, armed men shot and killed the husband of a primary candidate running for municipal elections for the Liberal Party. Similarly, a primary candidate to run in the municipal elections for the National Party was shot and killed in the Yoro department. In Danli, El Paraiso, a former municipal councilor affiliated with the Liberty and Refoundation (LIBRE) party was killed by gunmen. These attacks took place in the week preceding primary elections to nominate candidates from the three eligible parties — the National Party, the Liberal Party, and the LIBRE party — running in the general elections scheduled for November. According to preliminary investigations, these attacks are likely part of an intimidation tactic used by political rivals of narco-trafficking groups in order to have candidates renounce their political aspirations. Last week, a gang member revealed corruption and collusion between narco-trafficking groups and former ruling politicians (Infobae, 11 March 2021), which foreshadows the interference of criminal groups in this year’s electoral process (France 24, 14 March 2021).

Elsewhere in Honduras, two members of the Garifuna indigenous community were kidnapped by several armed individuals and killed in the Cortes region. This comes a week after a leader was killed along with two other Garifuna community members in the Atlanta region. Members of the Garifuna community have been the targets of attacks since 2009 for their vocal activism against extractive industries and logging companies (The Guardian, 23 July 2020).

Lastly, in Guatemala, the lack of transparency over the elections of new members of the Constitutional Courts sparked protests. The Constitutional Court is the highest judicial body in Guatemala, ruling on the constitutionality of national legislation as well as electoral and penal issues. In the coming years, it is bound to rule on the suspension of mining extraction, labor laws, the prosecution of the former president and politicians, and the vetting of candidates running in the 2023 general election. Civil society organizations, including indigenous organizations, have raised concerns over the impartiality of the candidates. This follows the issuing of an arrest warrant against a candidate for influence peddling and trying to manipulate the elections of judges to the Constitutional Court (Associated Press, 2 March 2021). This election further erodes Guatemalans’ trust in their political leaders. In November 2021, violent anti-government demonstrations were sparked by the approval of the controversial 2021 National Budget amid allegations of collusion with private interest and charges that government officials were corrupt.