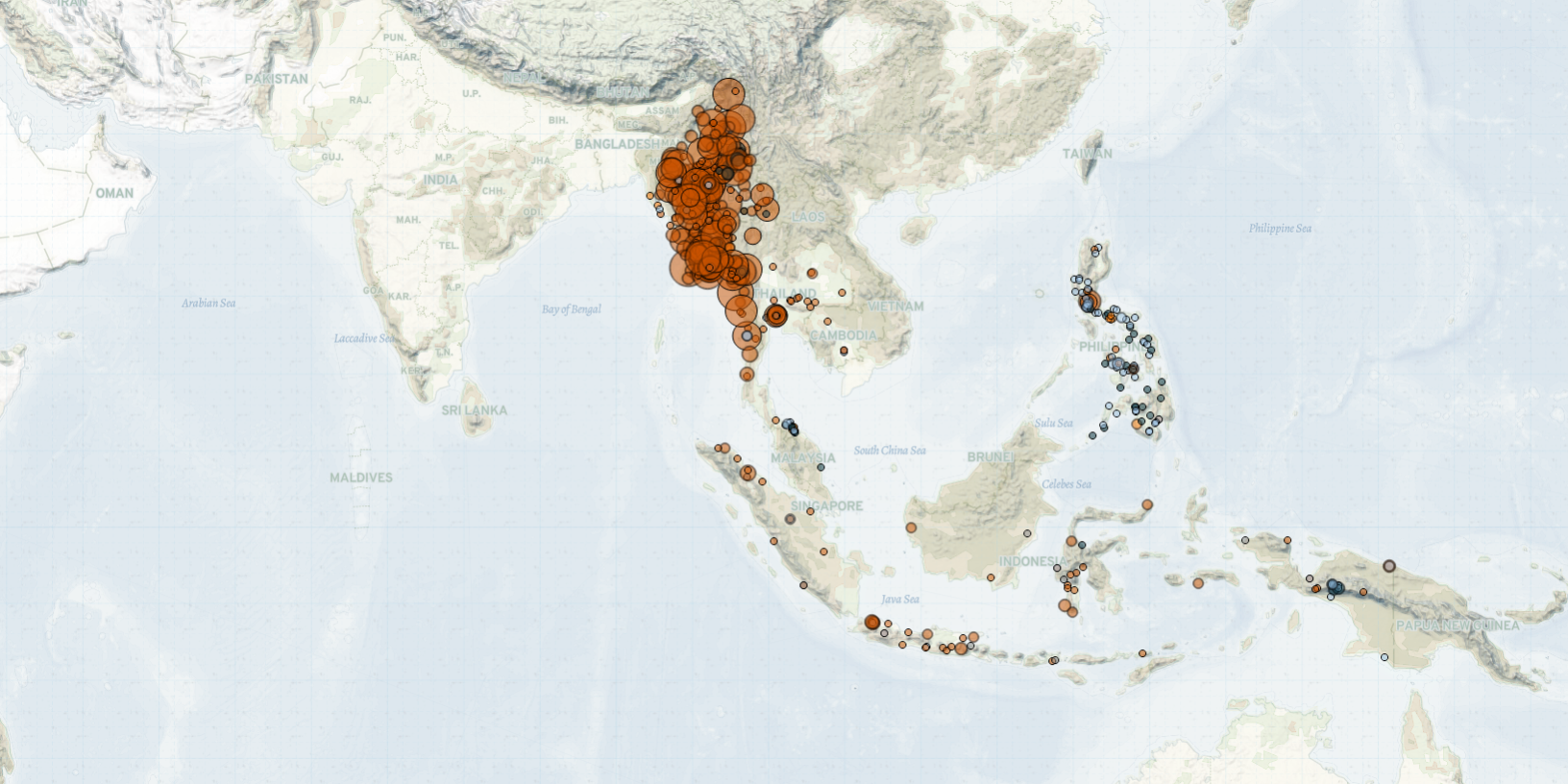 Last week in Southeast Asia, dozens were killed in Myanmar as security forces continue to use violent measures to crack down on mass demonstrations. Meanwhile, the military junta stripped five independent media outlets of their licenses in an effort to further restrict reporting of events in the country. In Indonesia, protests against the extension of West Papua’s Special Autonomy Status decreased amid increased intervention by authorities. In Thailand, police carried out a mass arrest of members of the We Volunteer (WeVo) group, which has served as a volunteer security force for anti-government demonstrators. Protests commemorating International Women’s Day on 8 March were also held across the region. Lastly, in the Philippines, authorities intensified their operations against left-wing activists after the president urged security forces to use lethal force to quell communist rebels.

In Myanmar, security forces continue to use lethal force to crackdown on demonstrators. Frustration continues to mount as the military junta faces increased challenges in bringing the population under its control amid the ongoing civil disobedience movement. Dozens of fatalities were recorded last week as military troops deployed in urban areas employed tactics including the use of tear gas, stun grenades, as well as battlefield weapons to crack down on demonstrations. A report published by Amnesty International which reviewed 55 video clips recorded between 28 February and 8 March found that security forces deployed semi-automatic rifles, sniper rifles, and light machine guns against demonstrators (Amnesty International, 11 March 2021). The report also notes the deployment of military divisions to urban areas, which were notorious for committing war crimes in the conflicts in Rakhine, Kachin, and northern Shan states, most notably against the Rohingya in 2017.

Meanwhile, the military intensified its night-time raids across the country. Indiscriminate firing of live ammunition in residential areas was reported during some of these raids. During two such raids, two officials from the National League for Democracy were taken away by security forces at night, only for their families to be informed to retrieve their bodies the next day. Both officials were believed to have been tortured to death while in custody (CNN, 10 March 2021).

In other developments, the military’s State Administration Council (SAC) stepped up its efforts to further crack down on independent media. On 7 March, the SAC revoked the operating licenses of five independent news outlets, banning them from publishing and broadcasting through a variety of media platforms (VOA, 8 March 2021). In the three days following the announcement, the offices of three media outlets were raided, as security forces seized office equipment and data servers (CNA, 10 March 2021). Meanwhile, the military has begun occupying and establishing bases in public buildings, including in universities, schools, and hospitals over the weekend (Irrawaddy, 8 March 2021).

Elsewhere, armed clashes between the Myanmar military and ethnic armed organizations were reported in northern Shan, Kachin, Kayin, and Mon States. Notably, following months with no reports of clashes in northern Rakhine, the Arakan Rohingya Salvation Army (ARSA) reportedly launched an offensive against a Myanmar military vehicle which was transporting border fences, resulting in three fatalities.

Elsewhere, in Indonesia, protests by Papuan communities against the extension of the Special Autonomy Status decreased last week amid harsher crackdowns by authorities. One such protest in Bali saw dozens of protesters getting arrested for allegedly violating coronavirus movement restrictions currently in place on the island (Bali Radar, 8 March 2021). Yet another protest was dispersed for similar reasons in Malang city, East Java province. Elsewhere, in West Papua, student-led protests in opposition to military presence in their communities were reported. The military has been placed in these communities to assist the government in its infrastructure projects. Protesters are concerned the military’s presence might lead to increased instability in the region (Suara Papua, 8 March 2021).

Meanwhile, in Thailand, protests remained largely peaceful and proceeded without intervention. Relatedly, 48 members of the We Volunteer (WeVo) group, which has served as volunteer guards for anti-government demonstrators, were arrested last week at a mall in Bangkok (Bangkok Post, 8 March 2021). Similar to the treatment of other key leaders of the anti-government movement — four of whom have reportedly been denied bail for the fifth time (Bangkok Post, 13 March 2020) — courts also denied bail for the leader of WeVo (Bangkok Post, 8 March 2021). As protest leaders continue to be detained without bail, protesters continue to call for their release while reiterating the three key demands of the anti-government movement: the prime minister’s resignation, reform of the monarchy, and constitutional reform.

In commemoration of International Women’s Day on 8 March, protests were reported in Indonesia, Malaysia, and the Philippines. Specific demands by protesters in Malaysia include the enactment of a sexual harrassment law, while Indonesian protesters similarly called on the government to ratify the Elimination of Sexual Violence Bill (Kaltim Tribun, 8 March 2021). The Elimination of Sexual Violence Bill was introduced in January 2016 and focuses on the prevention of sexual violence, including the acknowledgement of marital rape. However, in July 2020, the bill was dropped from the priority list and parliament suspended deliberations on it (Jakarta Post, 1 July 2020). As well, in Myanmar, as part of the ongoing protests against the military coup, women used their htamein (skirts) as flags and hung them across streets in order to slow the advance of state forces during demonstrations. Many men in Myanmar believe that walking underneath garments worn on the lower half of a woman’s body will decrease their masculinity.

Finally, the Philippines saw an increase in violence last week as state forces escalated their campaign against left-wing activists. The most deadly of these attacks occurred on 7 March, when nine activists were killed and six others were arrested in separate operations across the Calabarzon region (Rappler, 7 March 2021). The incident has since been given the moniker ‘Bloody Sunday’ by opposition groups. The crackdown comes on the heels of President Rodrigo Duterte’s 5 March announcement that he had directed state forces to “finish off” and “kill” all communist rebels during armed encounters (Al Jazeera, 6 March 2021). Human rights organizations, including Human Rights Watch and the UN Office of the High Commissioner for Human Rights, have been quick to express alarm over the killings, which have been likened to a drug-war style crackdown on leftists in the country (Human Rights Watch, 10 March 2021; UN News, 9 March 2021). In contrast, authorities are arguing that the lethal operations were legitimate on the basis that court-issued search warrants had been issued, and that the activists had fought back (PNA, 8 March 2021; Philstar, 15 March, 2021). Similar arguments have been used to justify killings linked to the war on drugs. Protests against the killings were reported in Metro Manila.