Protesters have been gathering in front of the former Japanese Embassy in Seoul, South Korea every Wednesday since January 1992. They call on the Japanese government to officially apologize to Korean victims who were coerced to render sexual services to Japanese military personnel before and during World War II (The Korean Council, 2021). The surviving victims and their supporters advocate for a just resolution to the sexual violence against ‘comfort women’ — those women forced to provide sexual services to Japanese officers and soldiers (Asian Women’s Fund, 2021). As one of the longest-running protest movements in South Korea, the ongoing demonstration movement has gathered broader support over time; has expanded geographically; and, despite obstacles, has continued to be a barometer for Japan-South Korea relations. This report examines five key elements of these demonstrations between January 2018 and December 2020, including the leading role of the Korean Council, the other main actors involved in the movement, the geographic spread of the demonstrations, increased counter-protests, and rising anti-Japan sentiment. As the issue of ‘comfort women’ remains unresolved despite nearly three decades of demonstrations, the movement is likely to persist due to broad support across Korean society, resilience in the face of counter-protest movements, and tense relations between Japan and South Korea.

Pivotal Role of the Korean Council

While the Korean Council has remained at the forefront of organizing these demonstrations, a range of other social groups and the public at large have also advocated for justice for the victims. Of note, 80 events — 34% of total ‘comfort women’ demonstration events — were attended by student groups between 2018 and 2020. These students, ranging from K-12 to university students, have both participated in demonstrations led by others and have also independently organized their own. The active participation of younger generations in the movement points to its potential for continuity for generations to come if grievances are not resolved.

Additionally, politicians, the religious community, labor groups, and other civil society groups have also organized and attended ‘comfort women’ demonstrations. Surviving victims and their families from South Korea and other similarly affected countries, like the Philippines, have been active in demonstrations as well. Protesters from China, Japan, Indonesia, the United States, and the United Kingdom have joined the demonstrations to show support. The wide array of supporters points to the ability of the movement to cross-cut numerous groups, which allows for a wider support base. That, coupled with international support, also points to the long-term sustainability potential of the movement.

Demonstrations about the ‘comfort women’ issue have occurred across the country and have attracted local activists as well. While most of these demonstrations have taken place in Seoul, about 20% have been organized outside of the capital city, regularly reported in a range of different localities (see map below). Women’s organizations, human rights groups, labor groups, and local civic groups based outside of Seoul have been active in organizing these demonstrations. For example, the Busan Women’s Action group, composed of about 10 local women’s organizations, has held Wednesday demonstrations in front of the Japanese Consulate in Busan on the last Wednesday of every month since January 2016.  The geographic scope of these demonstrations is another example of how deep-seated and widespread the issue is across the Korean society and landscape. 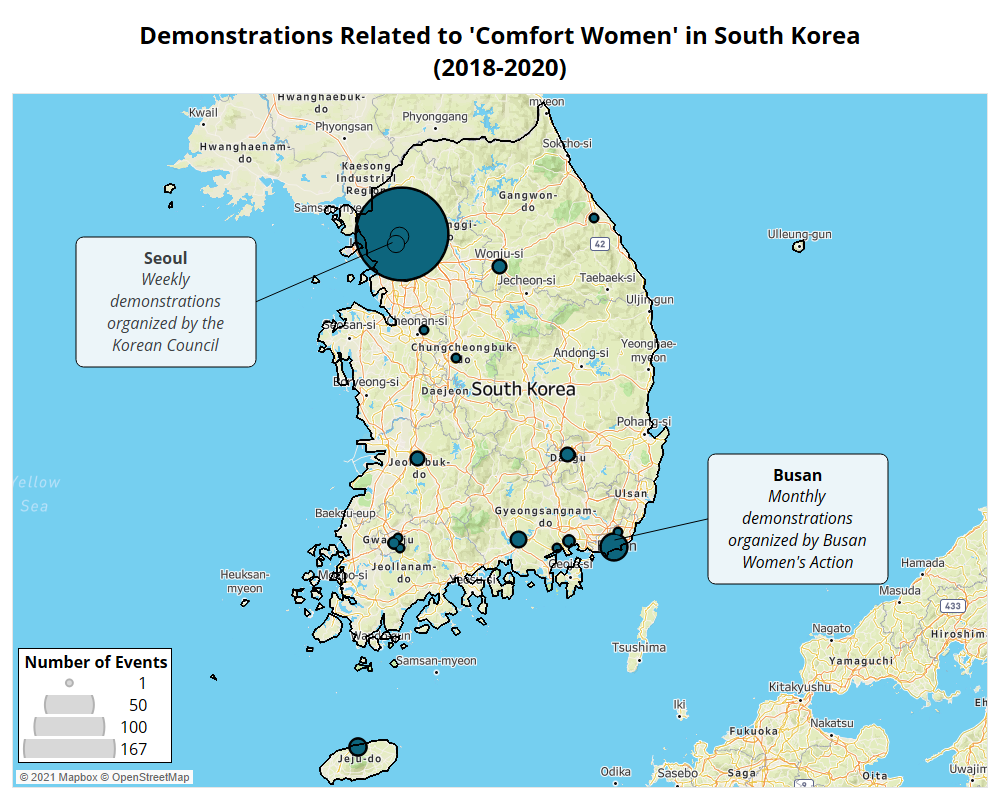 Rise of Counter-Protests against Wednesday Demonstrations and the Korean Council

As demonstrations over the ‘comfort women’ issue have risen, leading more people to become interested in and educated on the subject, counter-protest groups have emerged. Counter-protesters increased their activity in 2020 relative to the year prior. While in 2018 and 2019 there were more one-sided demonstrations, over a third of demonstrations were met by counter-protests in 2020 (see graph below). 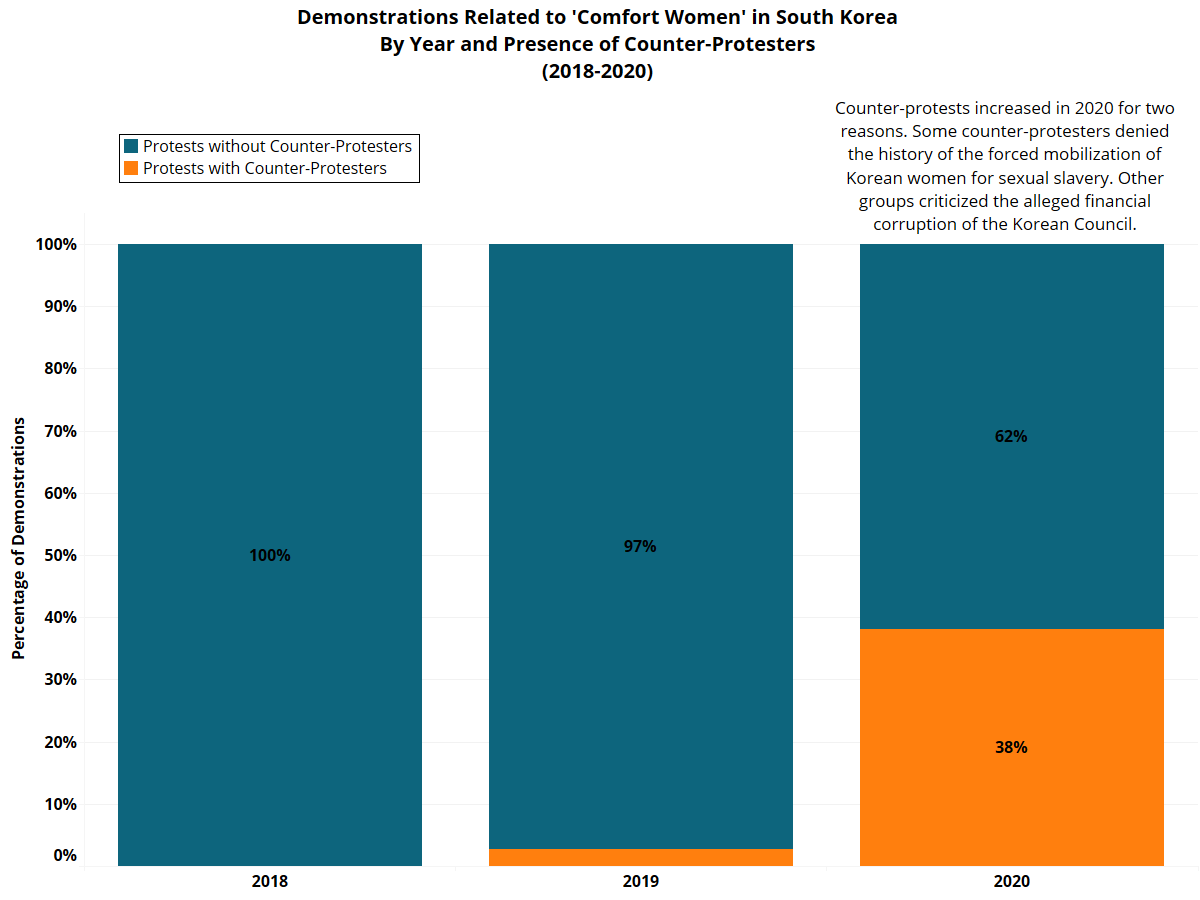 While demonstrations supporting the ‘comfort women’ cause have been spread across the country (see section above), all protests met by counter-protesters have been reported in the capital city, Seoul. While these demonstrations have received support from a wide variety of social groups, counter-protests appear to be limited in the variety of their supporters — primarily driven by activists aligned with conservative groups. These facts point to the more limited geographic spread and support base for this counter-protest movement, making the ability of such a counter movement to succeed more limited.

The counter-protesters can be categorized into two groups based on their demands. The first are comprised of far-right groups who deny the history of the forced mobilization of Korean women to provide sexual services (Hankyoreh, 21 May 2020). They claim that ‘comfort women’ participated in the system voluntarily (Nikkei Asia, 26 December 2019). The publication in mid-2019 of the book Anti-Japan Tribalism co-authored by Lee Woo-yeon, a research fellow at the Naksungdae Institute of Economic Research, caused strong reactions from both pro- and anti-Japanese groups (Nikkei Asia, 26 December 2019). The book challenged some of the widely agreed upon interpretations by South Koreans of Japan’s colonial rule. Lee started to protest against the weekly ‘comfort women’ demonstrations in December 2019. Also, from late-December 2019, two groups — the Joint Action Committee for Investigating Anti-Japanese Statues, and the Korean Modern and Contemporary History Research Council — started organizing demonstrations next to the Wednesday demonstrations, demanding that the Wednesday demonstrations stop and that the Statue of Peace be demolished.1The Statue of Peace, erected in front of the Japanese Embassy in Seoul in 2011, is a symbol representing the  women who were coerced to provide sexual services during World War II.

Meanwhile, other groups of counter-protesters have criticized the alleged financial corruption of the Korean Council. Allegations that the Korean Council exploited the surviving victims and misappropriated donations sparked another wave of counter-protests in May 2020 (The Korea Herald, 20 May 2020). The Prosecutor-General ordered an investigation into the Korean Council’s affairs following the allegations (Hankyoreh, 26 May 2020). The Korean Council’s former head, a current member of the Korea’s National Assembly, was indicted in September 2020 on charges including fraud, embezzlement, and breach of trust (Reuters, 14 September 2020), and is still on trial as of March 2021. Nevertheless, the event negatively impacted the image of the organization and has contributed to a rise in counter-protests against the movement. Politically conservative groups  — such as People’s Solidarity of Liberty, Freedom Korea National Defense Corps, and Platoon of Moms — which are rarely seen at the demonstration sites for ‘comfort women’ issues, protested against the Korean Council’s alleged corruption scandal on top of existing demands.

Despite the increasing number of counter-protests in 2020, the ‘comfort women’ protest movement has not been undermined. This is largely a result of the proliferation of the national and global advocacy movement for the ‘comfort women’ issue. When the Korean Council was publicly denounced by the alleged embezzlement of public donations, students and civil solidarity groups continued to show support by attending weekly demonstrations organized by the Korean Council (Hankyoreh, 24 May 2020; Hankyoreh, 21 May 2020). The global advocacy movement’s fight to keep the Statue of Peace also helped to call people’s attention back to resolving the ‘comfort women’ issue (The Korea Herald, 14 December 2021).

The number of attendees of ‘comfort women’ demonstrations skyrocketed in 2019 alongside the general public’s increasing anti-Japan sentiment. In August 2019, the Japanese government implemented a decision to remove South Korea from the ‘white list’ for preferential trading  (Xinhua, 28 August 2019). With rising trade and diplomatic tensions between South Korea and Japan, the South Korean public began to protest against Japan’s economic retaliation, initiating a nationwide boycott of Japanese products. These large-scale anti-Japan rallies were not limited to demonstrating solely against Japan’s economic policy, but they also invoked unresolved history between the two countries.

As the main driver of the movement, the Korean Council has pushed forward with continued demonstrations and has maintained deep-rooted support across the country, despite corruption allegations levied against its former leadership. Simultaneously, the public’s widespread anti-Japan sentiment amid worsening bilateral relations between South Korea and Japan has spurred many to participate in the movement.

In early 2021, a South Korean court ruled that the Japanese government should compensate Korean women who were forced to provide sexual services before and during World War II. However, the Japanese government has rejected the ruling, claiming that the situation has already been “resolved completely and definitely” (South China Morning Post, 8 January 2021). Recently, South Korean President Moon Jae-in stated that his administration “is ready to sit down and have talks with the Japanese government anytime” to solve longstanding historical disagreements (The Korea Herald, 1 March 2021). However, tensions persist between the two countries and, when they heighten, the ‘comfort women’ issue rise to the forefront. These demonstrations are expected to spike in line with increased tensions between the two countries going forward. Despite challenges faced by the actors leading the movement, the issue remains deeply entrenched across the country and among a diversity of groups in Korean society. As long as a meaningful resolution is not achieved to address such deep-seated grievances echoing from the horrors of World War II, the movement is likely to continue.

Jihyeon is an East Asia Researcher at ACLED. She earned her BA in Political Science and Diplomacy from Ewha Womans University and MA in East Asian Studies from Indiana University, Bloomington. Jihyeon's research interest includes the design and functioning of international institutions and international cooperation among Asia-Pacific states. She is fluent in English, Korean, and Mandarin.