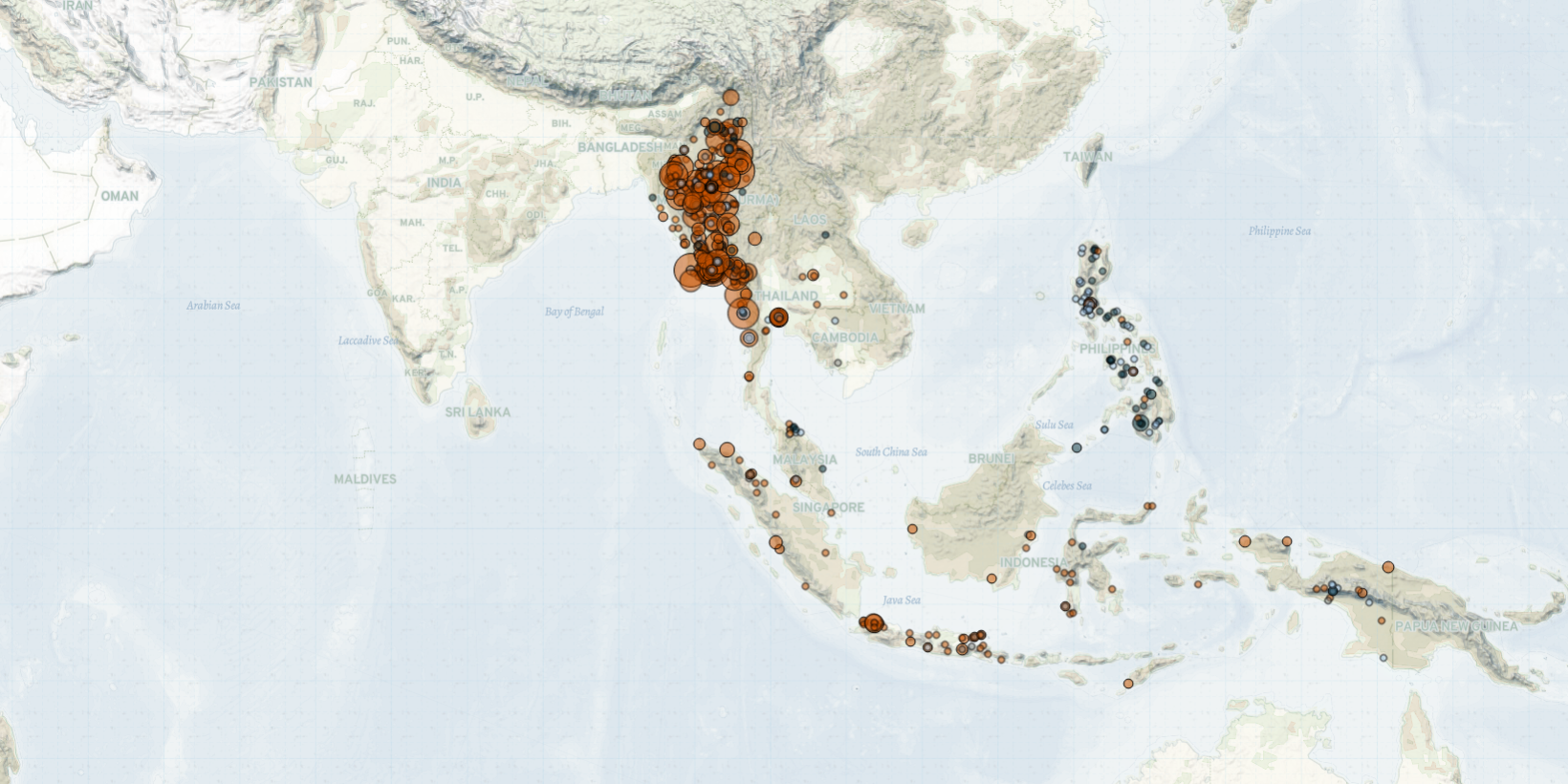 Last week in Southeast Asia, the military junta in Myanmar continued its lethal crackdown on the anti-coup movement. In addition to suppressing demonstrations with excessive force, security forces have also been stepping up neighborhood raids that have resulted in more fatalities. In response to the indiscriminate use of force by security forces, anti-coup demonstrators have adopted new protest strategies last week by holding ‘peopleless’ protests and a nationwide ‘silent strike’. Meanwhile, there was an increase in clashes between rebel groups and state forces in both Myanmar and the Philippines. In the Philippines, state forces fought with both communist and Islamist rebels on separate occasions. In both cases, the rebels were being pursued by state forces, and the clashes were particularly deadly. Elsewhere, in Thailand and Indonesia, demonstration activity continued, with reports of intervention by authorities. Protesters gathered for the largest anti-government demonstration this year in Thailand even as police continue to use force to disperse protests and file charges against protesters.

In Myanmar, the military junta continued its intensified operations in large urban centers of the country. Notably, a days-long operation in the second largest city of Mandalay resulted in dozens being killed (Myanmar Now, 24 March 2021). Security forces also conducted night raids and opened fire in residential areas, reportedly with the use of automatic weapons, including machine guns (Straits Times, 23 March 2021). The indiscriminate use of lethal force by security forces during the operation in Mandalay also claimed the life of a seven-year-old girl (Channel News Asia, 24 March 2021). The death toll since the 1 February coup currently stands at over 500 (Straits Times, 31 March 2021).1ACLED data is current as of 26 March 2021 and thus does not yet reflect this fatality count. Events and fatalities from 27 March — one of the deadliest days yet since the military coup — will be included in next week’s data.

Following weeks of deadly crackdowns by security forces, anti-coup demonstrators have adapted their tactics in response to the intensified repression. To reduce the number of fatalities, protesters are staging ‘peopleless’ protests by lining up rows of placards and other symbolic items on streets (Channel News Asia, 20 March 2021). Similarly, a nationwide ‘silent strike’ was launched on 24 March as a show of continued opposition to the military junta.2As per ACLED methodology, these symbolic displays of opposition are not coded as Protest events. Where relevant, they have been coded as Strategic Developments. For more on ACLED methodology, see the ACLED Codebook. On that day, entire towns and cities were effectively shut down as citizens stayed at home and businesses were closed (CNN, 24 March 2021). At the same time, demonstrators are also adopting other less passive tactics in response to the violence of the military, with reports of Molotov cocktails being thrown and giant slingshots used to hurl blocks of concrete at some demonstrations (AP, 22 March 2021; Guardian, 27 March 2021).

In the Philippines, fighting between state forces and rebel groups was particularly deadly. On the Islamist front, the military executed a six-day major offensive against the Bangsamoro Islamic Freedom Fighters (BIFF) after reportedly detecting increased movements of BIFF troops in the interior of Maguindanao province (Philippine News Agency, 21 March 2021). The offensive, which took place from 18 to 23 March, included airstrikes and artillery shelling at suspected BIFF positions. There were at least 14 confirmed BIFF fatalities. As a result of the hostilities, at least 5,000 families in Maguindanao province have been displaced (Philippine News Agency, 23 March 2021). Separately, two Abu Sayyaf militants were also killed in a clash with military forces. The latest clash comes after an Abu Sayyaf leader was killed the previous week as part of a hostage rescue operation by Philippine state forces.

Similarly, particularly deadly clashes between state forces and the communist New People’s Army (NPA) were reported as the anniversary of the NPA’s founding on 29 March approached. Notably, 10 NPA members were killed during a clash in Negros Oriental province as state forces carried out a pursuit operation following a tip-off by locals that rebels were in the area. The increased military tensions forced at least 68 families to flee their homes as authorities pursued the rebels (Sunstar, 25 March 2021). This comes just a few days after yet another deadly clash in Camarines Norte province on 19 March during which five police officers were killed.

In Thailand, there was an uptick in violence involving separatist groups in the deep south ahead of local elections on 28 March. Two civilians were killed last week by suspected Malay Muslim separatists, while police officers were wounded by an IED planted by the separatists. Separatist violence in Thailand’s Muslim-majority deep south is expected to increase as the month of Ramadan approaches, as it has in previous years.

Meanwhile, in Indonesia, violence against civilians increased in Papua province. While two civilians emerged unscathed from an attack by unidentified assailants, another was shot dead by police in the mining town of Tembagapura. Police claim that the victim was a member of the West Papua National Liberation Army (TPNPB), but his relatives insist that he was a civilian and have called on the National Commission on Human Rights to investigate the incident (Tribun News, 23 March 2021). Indonesian state forces have used similar claims to justify the killings of civilians in West Papua.

Elsewhere in Indonesia, protests in support of independence movements were met with intervention by authorities. In addition to the usual protests calling for Papuan independence, last week, protests were also held in Aceh to commemorate the 148th anniversary of the Aceh War against Dutch colonizers. Some protesters who displayed flags and shouted slogans calling for Acehnese independence were arrested by police. Likewise, several students in Papua province were detained by police after they raised the Morning Star flag — a symbol of the Papuan independence movement — during a protest against the extension of the Special Autonomy Status in West Papua (International Coalition for Papua, 25 March 2021).

In Thailand, one of the largest protests recorded so far this year took place on 24 March, when thousands gathered in Bangkok to demand the release of detained anti-government protest leaders as well as monarchy reform (Bangkok Post, 24 March 2021). While this mass demonstration proceeded peacefully, a similar demonstration on 20 March turned violent after police used rubber bullets, tear gas, and water cannons to disperse anti-government protesters (Bangkok Post, 20 March 2021). The use of such measures is becoming increasingly common, and demonstrators also appear to be responding more violently to these crackdowns. Additionally, authorities continue to use the lèse majesté law against protesters, and charges are expected to be filed against 21 protesters who participated in the mass protest on 24 March (Bangkok Post, 27 March 2021). Protesters are likely to step up their calls to repeal the harsh royal defamation law alongside their demand for monarchy reform.