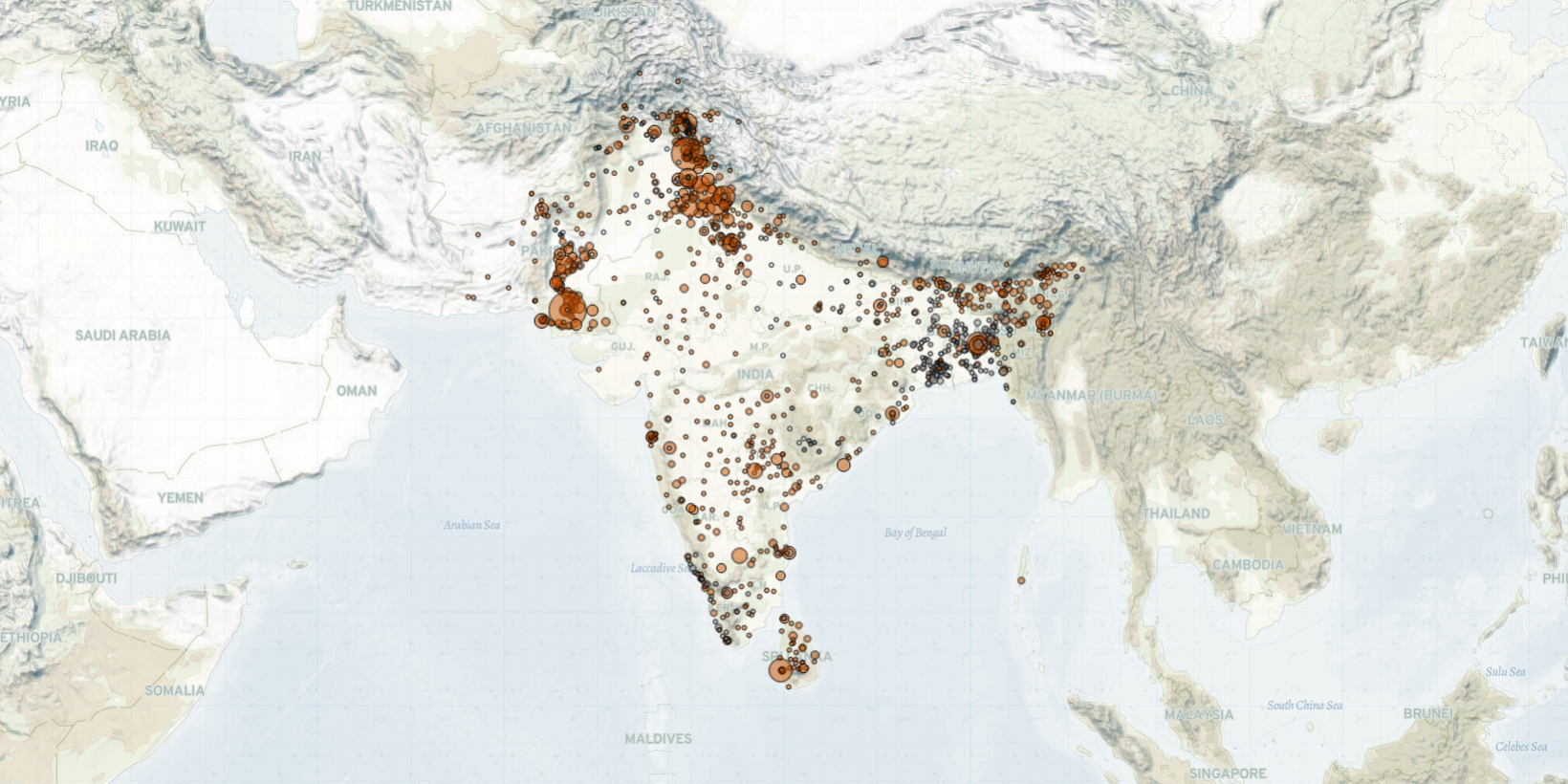 Over 400 Maoist rebels attacked police who were conducting an operation in Chhattisgarh state in India last week. At least 22 security force officers died and 31 more were injured. At least 10 Maoists were also reported to have been killed (Deccan Herald, 5 April 2021). The encounter took place in Bastar division, known as the stronghold of the rebels (Al Jazeera, 6 April 2021). This is one of the deadliest Naxal-Maoist encounters in terms of police fatalities recorded by ACLED over the past five years (since ACLED coverage of India began in 2016). Following the attack, the Indian Minister of Home Affairs Amit Shah stated that operations will be intensified to uproot the Naxal-Maoist movement (The New York Times, 6 April 2021). Days after the clash, the banned Communist Party of India (Maoist) released a statement that their fight was not against security forces. Instead, they denounced “the capitalist and Brahminical government” and called for a nationwide strike on 26 April to support farmers’ demonstrations against the three new farm laws (Hindustan Times, 6 April 2021).

In J&K, security forces conducted several operations against domestic militants. At least seven Al Qaeda-affiliated Ansar Ghazwat-ul-Hind (AGuH) militants, including the group’s leader, were killed during three separate operations. Although police claimed they had defeated the outfit in 2019, sporadic clashes with AGuH have taken place since then (Economic Times, 24 October 2019). ACLED recorded several such encounters in Shopian district in J&K in 2020. Amid the intensified security operations, police authorities advised journalists to stop live media coverage of encounters and directed officers to take actions against violators. Media outlets and associations denounced the advisory as an attack on press freedom (Daily Excelsior, 8 April 2021; Hindustan Times, 8 April 2021).

Farmer demonstrations against agricultural reform increased across North India last week, including in Punjab and Haryana states. In addition to opposition against the new laws aimed at deregulating the market, demonstrators also expressed discontent with the government’s new procurement norms. The rules require farmers to obtain land records for wheat procurement, which some farmers consider costly and announced at a very short notice (Deccan Herald, 17 March 2021). Farmers blocked roads during the visit of the Chief Minister in Haryana state and clashed with police who cane-charged them. This triggered peaceful protests by farmers’ organizations, who blame police for using excessive force and injuring an elderly farmer (Indian Express, 3 April 2021). In another incident in Haryana, farmers blocked a vehicle carrying a legislator from the ruling Bharatiya Janata Party (BJP) and vandalized it.

Elsewhere in India, electoral violence increased during the state assembly elections in West Bengal, Kerala, and Tamil Nadu states. In West Bengal, at least four BJP members and supporters were killed by unidentified assailants. Multiple clashes also took place between the two main political rivals in the states — the Trinamool Congress Party (TMC) and the BJP. The TMC has accused the BJP of inciting discriminatory politics in the state, home to a significant Muslim minority (United News of India, 3 April 2021). In Kerala, Communist Party of India (Marxist) members killed a Muslim Youth League member after polling concluded. Members of the regionally-strong All India Anna Dravida Munnetra Kazhagam (AIADMK) party and its opponent Dravida Munnetra Kazhagam (DMK) clashed during polling in Tamil Nadu, accusing each other of bribing voters.

In Pakistan, Taliban violence increased last week compared to the week prior due to targeted attacks and military operations in Khyber Pakhtunkhwa (KP) province. Two Tehreek-i-Taliban Pakistan (TTP) militants were killed during two separate operations in North Waziristan district in KP. Suspected TTP militants killed an anti-terrorism court judge and his three family members in a targeted attack in Peshawar city. Meanwhile, TTP claims responsibility for killing its former senior commander, Mian Omar Shah, over cooperating with Pakistani authorities and undermining the Taliban’s goals (Twitter, 10 April 2021), suggesting that such targeted attacks against those surrendering to the state could continue. The combined internal and external tensions faced by the TTP may also result from alleged failed negotiations with the Pakistani government earlier this year (The Diplomat, 3 April 2021). According to reports citing active TTP members, the failure in talks was due to dissent within TTP and, in particular, some younger cadres’ unwillingness to negotiate with the government (The Diplomat, 3 April 2021).

Katerina Bozhinova is the Partnership Officer at ACLED. She holds a BA in Political Science and International Relations and an MSc in Sustainable Resource Management. Her research interests include land rights and environmental governance and policy.
14 April 2021
Share
TweetShare on Twitter Share on FacebookShare on Facebook Share on LinkedInShare on LinkedIn