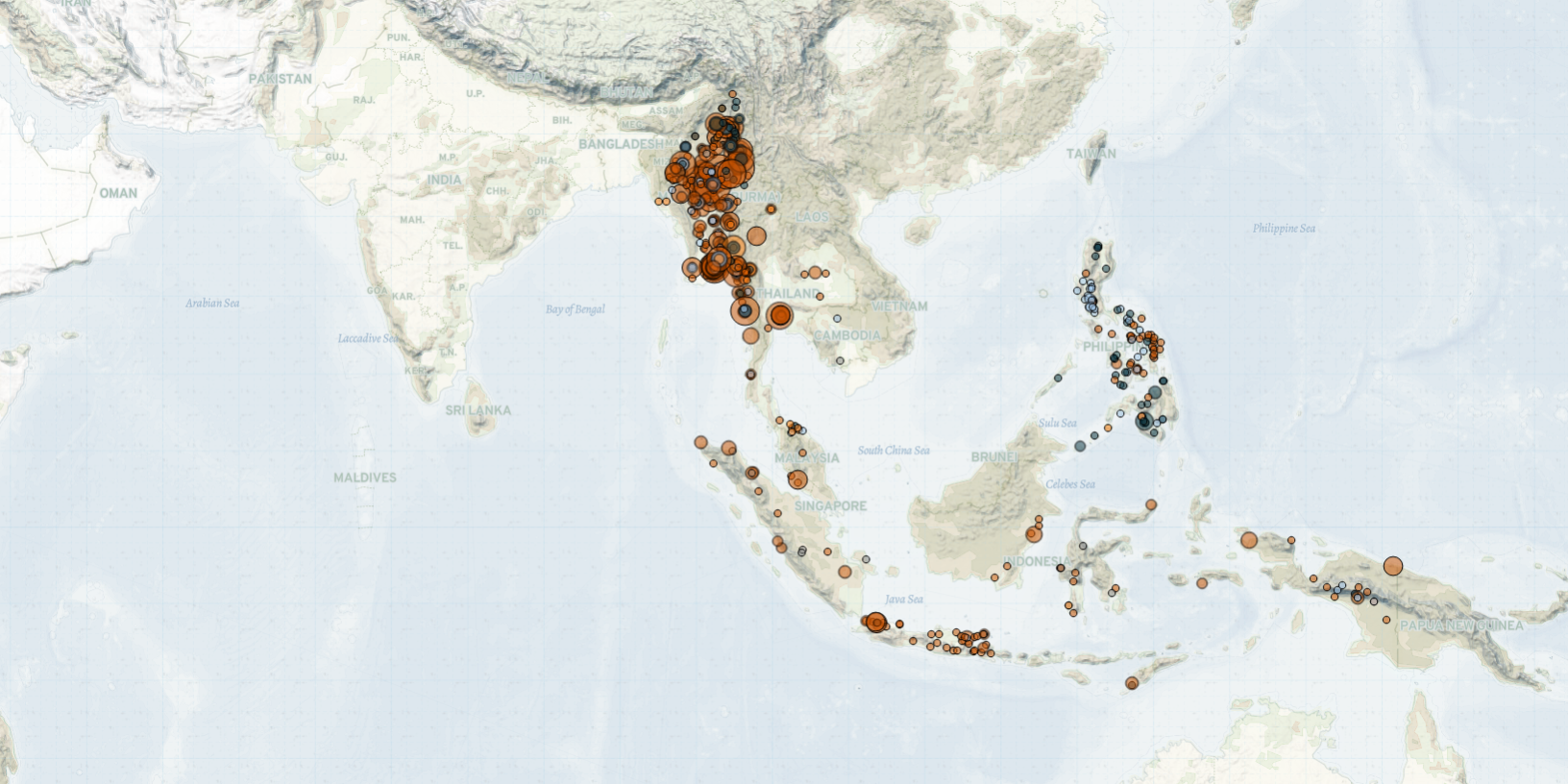 Last week in Southeast Asia, security forces in Myanmar continued to use lethal force against anti-coup demonstrators. As the crackdown continues, supporters of the anti-coup movement are stepping up their resistance, with reports of citizens increasingly fighting back. Meanwhile, anti-China sentiments continue to increase alongside increasing calls for the United Nations Security Council (UNSC) to take more concrete action against the military coup in Myanmar. Additionally, fighting between the military and ethnic armed organizations (EAOs) also continued amid increasing civilian support for the EAOs. Elsewhere, in the Philippines, diplomatic tensions with China have been running high over the disputed Spratly Islands in the South China Sea. Last week, the alleged harassment of a Philippine civilian vessel by Chinese navy vessels sparked further outcry. Lastly, in Thailand, anti-government protests continue unabated.

The military junta’s increasingly violent measures against anti-coup demonstrations over the past month have led some demonstrators — especially in areas outside major urban cities — to resort to using hunting rifles and homemade airguns as a form of self-defense (Irrawaddy, 8 April 2021; AP, 7 April 2021). In particular, the area of Sagaing region bordering India was a major flashpoint between security forces and anti-coup demonstrators last week. While some soldiers have been killed by demonstrators armed with rudimentary or homemade weapons, demonstrators remain heavily outgunned by security forces and continue to be targeted with excessive force (AP, 11 April 2021).

Meanwhile, anti-China sentiments in Myanmar continue to rise, with anti-coup demonstrators burning the Chinese flag and images of the Chinese president in a number of demonstrations last week. Anti-coup supporters have accused China of backing the military junta after it repeatedly blocked efforts by the UNSC to take more concrete actions against the junta (Reuters, 9 April 2021). As one of the five permanent members of the UNSC, China has veto power to prevent draft resolutions from being adopted.

Since last month, China-Philippines tensions over the long- and hotly-disputed Spratly Islands in the South China Sea have been brewing anew following the detection of more than 200 Chinese vessels moored at Whitsun Reef, over which both countries, as well as Vietnam, lay claim. Philippine authorities filed diplomatic protests against China over the presence of the vessels (Philippine Daily Inquirer, 22 March 2021), which China insists are fishing vessels seeking temporary shelter from bad weather (SCMP, 10 April 2021). As of 11 April, only 28 of these vessels remain at the Julian Felipe Reef, as the feature is referred to in the Philippines (Philippine Daily Inquirer, 11 April 2021), but tensions continue to remain high. Protesters last week gathered in Manila to oppose the presence of the Chinese vessels at the reef.

In response to the rising tensions, the US State Department issued a warning to China, invoking the US’s obligations to the Philippines under the US-Philippines Mutual Defense Treaty (Philippine Star, 9 April 2021). While calling for restraint from all parties, the Philippine Department of National Defense welcomed what the US called a “routine freedom of navigation operation” in the South China Sea last week, which Beijing denounced as “destabilizing to the region” (Manila Bulletin, 7 April 2021; SCMP, 9 April 2021).

Finally, in Thailand, anti-government protests continue unabated as the government released, and then immediately re-arrested, a key protest leader (Bangkok Post, 3 April 2021). Meanwhile, Jatuporn Promphan, a key figure of the United Front for Democracy against Dictatorship (UDD), which led earlier anti-coup protests by the ‘red shirts’ in Thailand, announced the creation of a new anti-government protest group. Surprisingly, a former leader of the ‘yellow shirts,’ who have traditionally been opposed to the ‘red shirts,’ also joined the new group, albeit as an individual. The new group seeks to set aside previous political differences and to unite for the sole purpose of ousting Prime Minister Prayut Chan-o-cha and the current government (Bangkok Post, 5 April 2021). The formation of this new group shows that the current establishment has fallen out of favor even amongst those who were previously in support of it. However, critics are of the view that the change sought by the youth-led anti-government movement can only come about with reform to the monarchy, which Jatuporn, who is of an older generation, has explicitly said he would not call for (Khaosod, 10 April 2021).