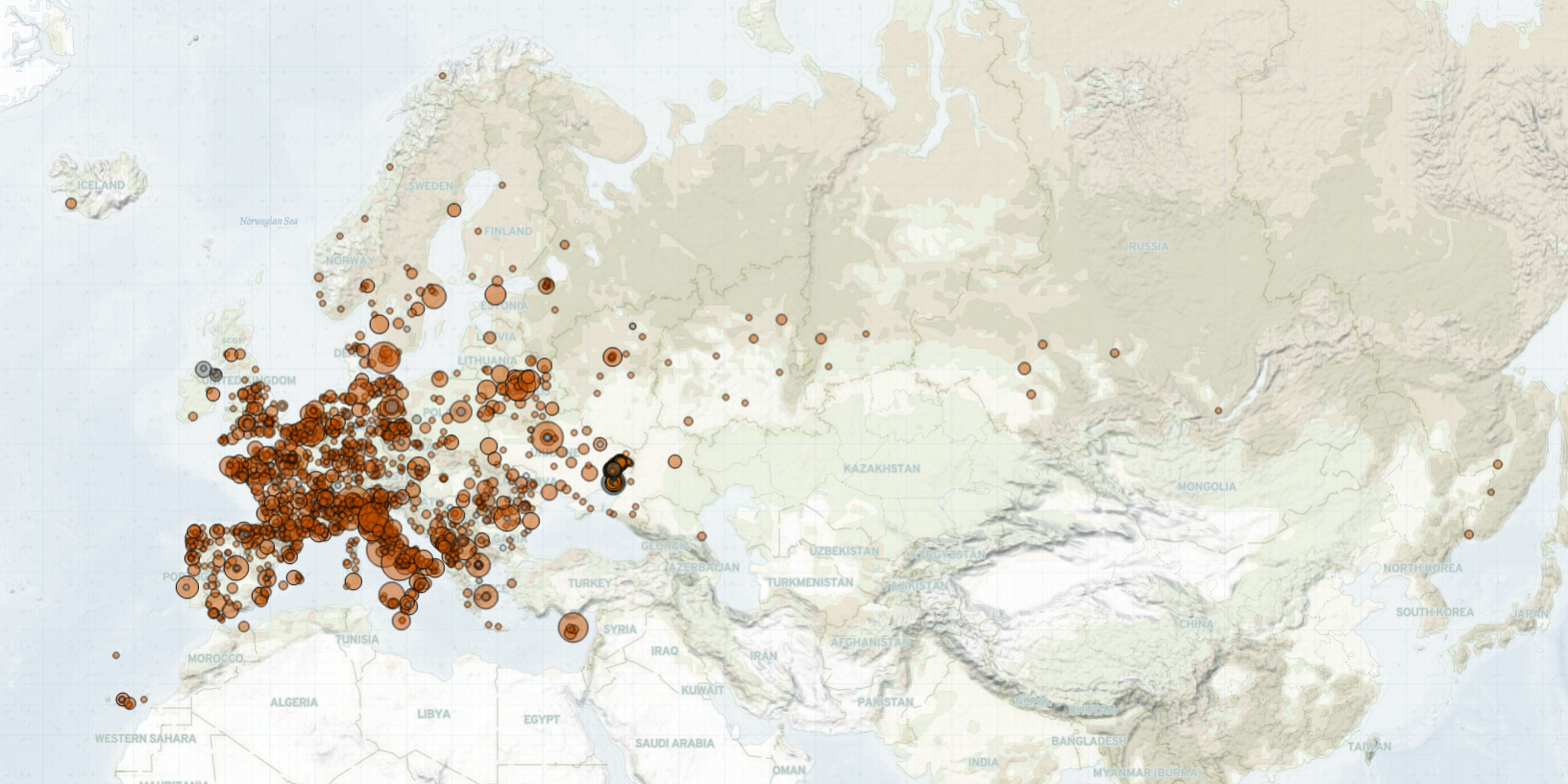 Last week, demonstrations related to the coronavirus pandemic continued across the region.  Opposition forces in Russia called for mass protests across the country due to the deteriorating health of imprisoned opposition leader Alexei Navalny and the ongoing crackdown on his political organization. In Belgium, a clash between Chechen and Kurdish youths resulted in at least one death. In Italy, protests by activists opposed to a proposed high-speed railway project turned violent, and in Germany, two separate demonstration events, one in support of the Black Lives Matter (BLM) movement and the other against banning a political party in Turkey, were responded to with excessive force. On the Russian-Ukrainian border, Russian forces continued large-scale mobilization aimed at intimidating Ukraine, leading to increased regional tensions.

In Russia, opposition leader Alexei Navalny’s health deteriorated in prison while the Russian government began to accelerate its efforts to dismantle Navalny’s political organization. According to his doctors and lawyers, Navalny is close to death due to his hunger strike (BBC, 20 April 2021). Meanwhile, arrests and harassment of Navalny HQ coordinators and activists continued across the country as the government considered labelling the entire group an “extremist organization” (RFE/RL, 17 April 2021). Navalny HQ leaders put out an urgent call to protest on 21 April in support of Navalny and his organization, warning that “if we keep quiet now, Russia will plunge into complete darkness. Peaceful political activity in Russia will become impossible” (RFE/RL, 18 April, 2021). Russian President Vladimir Putin is scheduled to address the nation on 21 April, increasing political and social tensions around the planned demonstrations.

In Belgium, reports came in on Saturday of a deadly riot in Liege on 16 April.1This event will be added to the ACLED dataset next week as it was reported after the weekly deadline for sourcing and coding events. Chechen and Kurdish youths attacked each other with heavy weapons and shots could be heard on videos shared to Twitter (De Limburger, 17 April 2021). Police later found a Kalashnikov rifle in a car parked nearby. The violence resulted in a few injuries and one death among the participants. The cause of the clash is unclear, although there are reports that the two groups had a confrontation the day before. The Belgian Democratic Council of Kurdistan Communities (NAV-BEL) denies Kurdish involvement, saying the violence is being blamed on them to criminalize their struggle (Ekurd Daily, 17 April 2021). This is not the first time the groups have clashed, however; Yazidi Kurds and Islamic Chechens, both groups of asylum-seekers, clashed in Bielefeld, Germany on 21 May 2016, resulting in five people being seriously injured (Ekurd Daily, 23 May 2016).

In Poland, activists demonstrated in several cities against the dismissal of the country’s human rights ombudsman Adam Bodnar. Bodnar is a leading defender of women’s and minority rights and has heavily criticized the government led by the right-wing Law and Justice party. The ruling raised concerns over the independence of the ombudsman institution in the country (Reuters, 15 April 2021).

In Greece, thousands marched against a new education law, leading to clashes with riot police in Athens and Thessaloniki. The law is particularly controversial because it allows police to patrol university campuses (AP, 16 April 2021).

In Italy, violence flared anew between No TAV activists and anti-riot police. Multiple clashes resulting in injuries on both sides occurred between 12 and 14 April over the clearing of an area in San Didero for the construction of a transport hub (La Repubblica, 14 April 2021). The No TAV movement was established in the early 1990s in Susa Valley in the Italian Alps west of Turin, in opposition to the proposed Turin-Lyon high-speed railway project (TAV) (PresidioEuropa.net). Its members and supporters of the cause have been opposing the project, which has yet to be realized, for more than two decades (PresidioEuropa.net).

In Germany, two separate protest events in Hamburg on 10 April ended in excessive force against protesters. Towards the end of a protest associated with the BLM movement, several police officers harassed and beat two Black protesters, aged 15 and 16, for a speech against the police that one of them gave at the rally (Rote Fahn, 15 April 2021). Also, a protest against the ban of the Peoples’ Democratic Party (HDP) in Turkey and fascism in Hamburg was disrupted by Turkish ‘fascists’ and Grey Wolves supporters who assaulted protesters and police, resulting in the slight injury of three officers (MOPO, 12 April 2021).

In France, on 10 April, motorcyclists protested throughout the country in 48 cities against a European reform that introduced mandatory vehicle safety inspections for motorcycles. While in the Netherlands, Extinction Rebellion organized an Earth Tour bicycle protest with stops in Nijmegen, Rotterdam, Hilversum, Amsterdam, and Den Haag.

In the Donbas region of Ukraine, fighting between Ukrainian government forces and Russian-led forces increased slightly compared to the previous week. There were 73 armed clashes, 96 shelling incidents, and four fatalities reported. The Russian Armed Forces continue to mobilize troops to the Russian-Ukrainian border. While the ultimate intent of this mobilization remains unclear, it seems that the Russian government is attempting to demonstrate its ability to escalate tensions around Ukraine —  showing off its military readiness to conduct large-scale offensive operations against multiple targets in the country, potentially including Kyiv, Odesa, and Donbas. On the night of 15 April, Russian Federal Security (FSB) gunboats in the Sea of Azov attempted to obstruct the navigation of a Ukrainian Navy gunboat group escorting commercial ships. (Ukrayinska Pravda, 15 April 2021). Earlier, the Russian Federation announced that from next week until October 2021, it would close part of the Black Sea near the Kerch Strait to warships and ships from other countries (Ukrayinska Pravda, 15 April 2021).

Franklin is a Europe Research Manager at ACLED. Before joining ACLED, Franklin worked at the Institute for the Study of War where he authored multiple reports on the structure and capabilities of Ukrainian and Russian-led separatist forces. He also spent time as an academic assistant at the Baltic Defense College while working on his master's degree in Tartu, Estonia. Franklin graduated from Texas A&M University with a double major in Russian Language and International politics and diplomacy.
Laura Fluegel

Olha is the Eastern Europe, Caucasus, and Central Asia Research Manager at ACLED. She holds an LLM in Human Rights Law with International Law and an LLM in Law of the Sea. She has working experience in the private law sector, with Ukrainian government institutions and human rights NGOs. Olha is fluent in Ukrainian, Russian, English, and German, and has working knowledge of Arabic and basic Dari.
Giulia Bernardi

Giulia is a Europe Assistant Research Manager. She holds an International Master in Russian, Central and East European Studies from the University of Glasgow and a Master of International Relations from KIMEP University Almaty. Before joining ACLED, she had experience in the field of journalism in the Caucasus and also worked as a media analyst. Giulia is fluent in Italian, English and Russian.
21 April 2021
Share
TweetShare on Twitter Share on FacebookShare on Facebook Share on LinkedInShare on LinkedIn