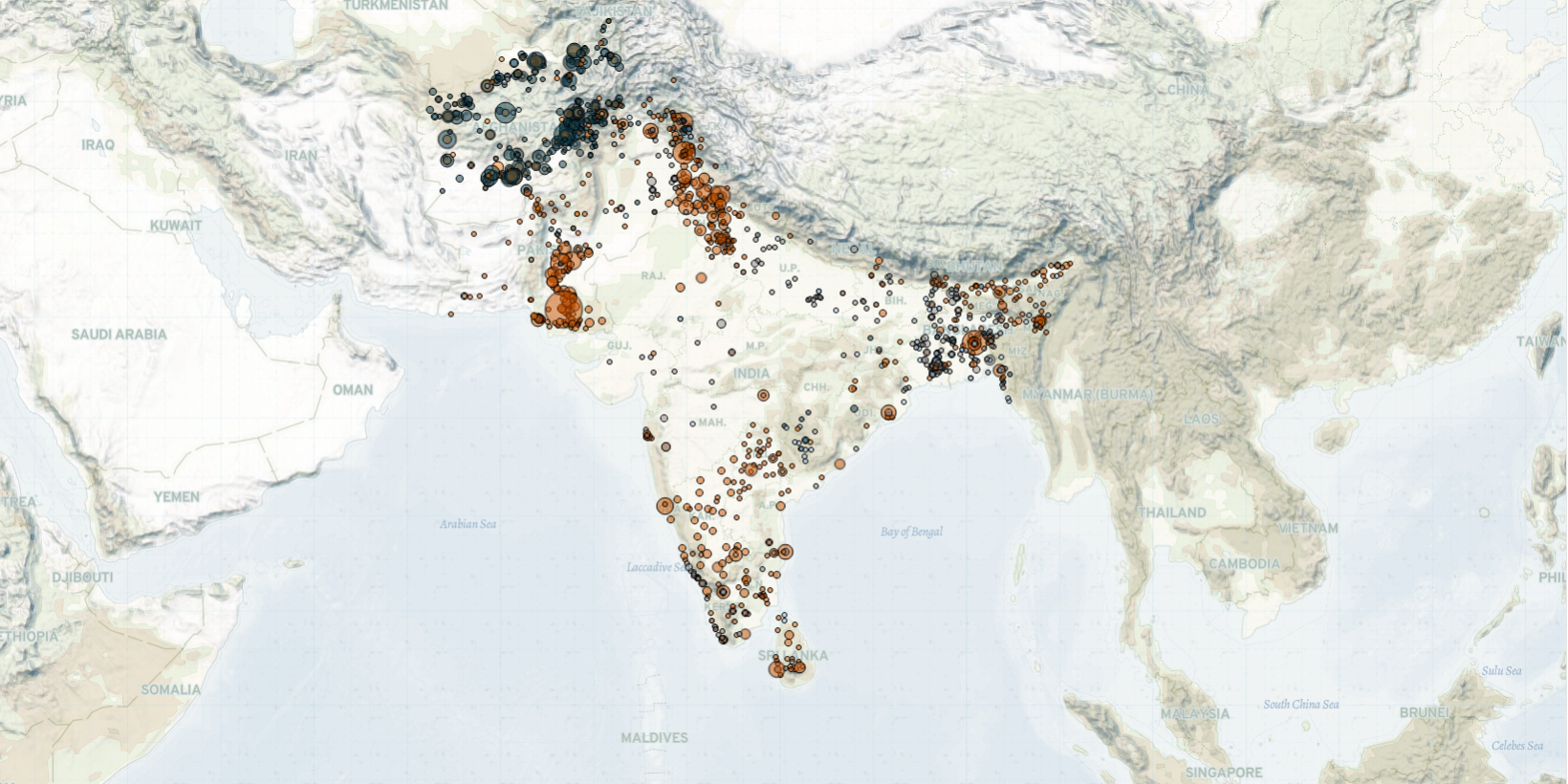 Last week in South Asia and Afghanistan, political violence continued in Afghanistan, Pakistan, and India, while demonstrations declined. Deadly clashes between the Taliban and Afghan forces took place in almost all provinces in Afghanistan. At least 30 civilians were killed in an explosion in Logar province. Meanwhile, militants attacked security forces and government supporters in Balochistan province of Pakistan. Paramilitary forces killed two civilians in tribal areas of Pakistan, leading to protests by residents. In India, Naxal-Maoist rebels targeted construction workers and infrastructure projects during their strike against anti-Maoist police operations. Electoral violence during the Indian assembly and local polls continued. Mob violence in India against healthcare workers was also reported amid record-high daily new coronavirus cases and shortages of hospital beds (New York Times, 4 May 2021). Demonstration activity in South Asia decreased compared to previous weeks, as most countries imposed restrictions on movement in their struggle to contain the spread of the coronavirus.

In Afghanistan,1ACLED is currently conducting a review of sourcing and reporting of the conflict in Afghanistan from 2020. Taliban and Afghan forces clashed across 29 of the country’s 34 provinces last week. Afghan forces inflicted hundreds of fatalities on the Taliban during air and ground operations. Most lethal operations took place in Nangarhar, Kandahar, and Wardak provinces, followed by Ghazni province, where violence has increased since early April 2021. The Taliban also ramped up its attacks on Afghan forces with reports of shelling and explosions. In the northern Takhar province, the group used a drone, killing three Afghan soldiers. This is one of several drone attacks by the Taliban since the start of last year.

Civilians continue to be affected by the ongoing violence. In Puli Alam city in Logar province, an explosion killed at least 30 civilians and wounded 90 last week. This is the deadliest attack targeting civilians in 2021 thus far. No group has yet claimed responsibility. Meanwhile, Taliban sources claim that a US airstrike killed two civilians in Kunduz province (Voice of Jihad, 28 April 2021), and other reports note that an Afghan airstrike killed eight civilians in Wardak province (TOLO News, 25 April 2021). The Taliban also abducted 20 students in Ghor province and reportedly opened fire on people protesting battles in the Qarabagh district in Ghazni province. In Asadabad city in northeastern Kunar province, the Taliban fired several rockets at the Kunar governor’s office during a Quran recitation event, injuring 13 students.

In Pakistan, unidentified militants targeted members of pro-government groups and security forces in Balochistan province last week. Two members of pro-government groups were killed in a targeted attack in Turbat town. This is the fourth attack on members of pro-government groups in the Turbat area over the past two weeks (Dawn, 26 April 2021). A police official was killed, and several others were injured as a bomb planted in a motorcycle exploded near a police van in Qilla Abdullah town. No group has yet claimed responsibility for the blast, which took place as Prime Minister Imran Khan was visiting nearby Quetta city for a meeting with the provincial leadership of his party, Pakistan Tehreek-e-Insaf (PTI) (Gandhara, 28 April 2021; Tribune, 28 April 2021). In the past, Baloch separatists have carried out similar attacks against security forces in Turbat and Quetta areas. Similarly, on 21 April, Taliban militant group Tehreek-i-Taliban Pakistan (TTP) claimed responsibility for an explosion targeting police and other government officials that killed five people in a parking lot of a hotel in Quetta city (Gandhara, 28 April 2021).

Meanwhile, in Khyber Pakhtunkhwa (KP) province, Frontier Corps (FC) state forces opened fire on a group of youths sitting outside a shop last week, killing two and injuring another in South Waziristan district. Following the attack, hundreds of people from the local Pashtun ethnic group staged a sit-in protest for three days, asking for compensation for relatives of the victims and for the evacuation of the houses where the security personnel were lodged. The FC forces said the victims were shot “by mistake and promised to leave the area” (Gandhara, 29 April 2021). Yet, residents have complained for years that thousands of Pashtun civilians have been killed or displaced due to the army’s indiscriminate strategies in their operations against militants (Gandhara, 29 April 2021).

In India, Naxal-Maoist rebels observed a Bharat Bandh (shutdown strike) last week, in protest against the government’s anti-Maoist operations in the Red Corridor. Construction workers, sites, and machinery were targeted in Chhattisgarh, Jharkhand, and Maharashtra states. At least four road construction workers were injured in the attacks. Maoists frequently target infrastructure development projects that facilitate security force movement in remote Maoist-dominated areas (The New Indian Express, 21 March 2021). The Communist Party of India (Maoist) also blew up a part of the railway track at a village in Jharkhand state last week, disrupting service to Mumbai for several hours. Two days after the strike, Maharashtra police, acting on a tip-off about a congregation of Maoists in a forest, exchanged fire with the rebels, killing two of them.

Elsewhere in India, clashes during the ongoing assembly and local elections continued last week in West Bengal and Uttar Pradesh states. In Uttar Pradesh, at least four people died in rival clashes during the local polls. A voter died after police used force to disperse a crowd near a polling booth in Pilibhit district, Uttar Pradesh. Another voter was killed in a crude bomb explosion in West Bengal, where a Bharatiya Janata Party (BJP) committee president was also killed in a factional dispute during the seventh phase of the assembly election. The incumbent Trinamool Congress Party (TMC) registered a landslide victory, winning 213 out of 294 state assembly seats, thus defeating the centrally-ruling BJP, who is set to become the major opposition party in the state (CNN, 3 May 2021).

Incidents of mob violence continue to rise amid the second wave of COVID-19 and the subsequent health crisis in India. In the past week, India averaged over 3,000 daily deaths and more than 350,000 daily new cases of the coronavirus (Johns Hopkins University & Medicine, 4 May 2021). Following the surge, India’s hospitals are facing an acute shortage of oxygen, beds, medicines, and protective equipment (New York Times, 3 May 2021). In south Delhi, family members of a woman who died due to the virus after not being admitted at a hospital assaulted the staff of the facility and injured at least seven of them. Mob violence incidents were also reported in Maharashtra, Odisha, Gujarat, and Bihar states. Family members and locals attacked health workers over their failure to hospitalize coronavirus patients and the deaths of their relatives due to the virus. Healthcare workers in India have faced increased attacks since the beginning of the pandemic last year (for more on violence against health workers, see this ACLED infographic). Meanwhile, hospital staff across the country staged protests last week, drawing attention to the shortage of medical oxygen and personal protective equipment, as well as the lack of staff at coronavirus care units.

Notably, demonstrations across South Asia have decreased compared to the prior weeks due to rising coronavirus infections and the ensuing measures to restrict the spread of the virus. Last week, there were only a limited number of major demonstration events organized by farmers in Pakistan and India. Farmers in India denounced the new agricultural laws and the shortage of gunny bags for grain procurement. In Pakistan’s Balochistan province, hundreds of farmers blocked highways at 20 different locations against recurring power outages.

Asena Karacalti is the South Asia Assistant Research Manager at ACLED, mainly overseeing the Afghanistan dataset.She holds a BA in Law, and an MSc in Cultural Anthropology and Development Studies from KU Leuven, Belgium. Her research interests focus on the transit experiences of migrant and refugee populations and political violence across the Middle East and North Africa. She has past experience as a lawyer and as an expert in migration and asylum organizations.She has previously worked as the Central Asia & the Caucasus, and Africa Research Manager at ACLED.
Katerina Bozhinova

Katerina Bozhinova is the South Asia Assistant Research Manager at ACLED. She holds a BA in Political Science and International Relations and an MSc in Sustainable Resource Management. Her research interests include land rights and environmental governance and policy.
5 May 2021
Share
TweetShare on Twitter Share on FacebookShare on Facebook Share on LinkedInShare on LinkedIn