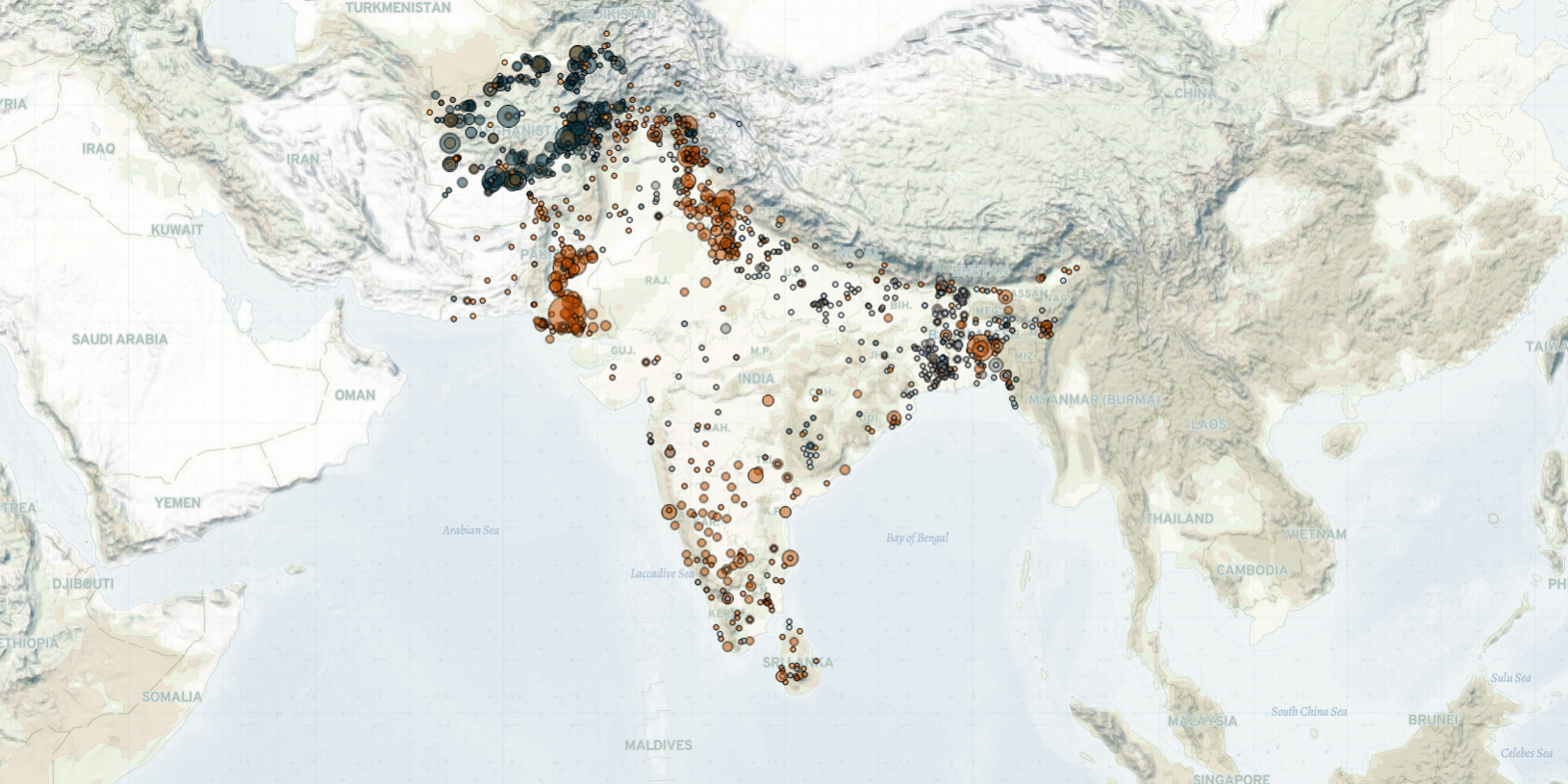 Last week in South Asia and Afghanistan, political violence continued in Afghanistan, Pakistan, and India. In Afghanistan, the Taliban ramped up its attacks against Afghan security forces and also targeted the Kandahar Airfield, currently occupied by North Atlantic Treaty Organization (NATO) troops. In Pakistan, security forces faced targeted attacks by Taliban and Baloch separatists. In Jammu and Kashmir (J&K), Indian and Pakistani security forces exchanged fire along the border, violating their ceasefire agreement for the first time since February. In India, deadly incidents of mob violence and attacks on political opponents were reported after the elections in West Bengal and Uttar Pradesh states. Lastly, violence against healthcare workers and clashes with police authorities were reported across several countries in South Asia amid a surge in coronavirus infections.

In Afghanistan,1ACLED is currently conducting a review of sourcing and reporting of the conflict in Afghanistan from 2020. violence between Taliban and Afghan forces continued across 30 of the country’s 34 provinces. Helmand, Kandahar, and Baghlan provinces had the highest levels of violence as both sides traded territory. The Taliban has reportedly captured military bases and checkpoints in Helmand, Ghazni, Baghlan, Kandahar, Herat, Laghman, Urozgan, and Farah provinces. The group also attacked Afghan forces in Ghazni, Lashkargah, Kandahar, Jalalabad, and Herat cities. These locations are all urban centers that the Taliban mostly avoided after the US-Taliban deal in February 2020 (Washington Post, 8 May 2021). Meanwhile, Afghan forces continued their operations and airstrikes, leading to high numbers of Taliban fatalities across the country.

Last week, the Taliban also targeted the Kandahar Airfield where NATO and US forces are stationed (New York Times, 3 May 2021). The base was previously shelled by the Taliban in early April 2021. There were no reported fatalities in both of the attacks. Except for these two incidents, the Taliban has avoided targeting NATO forces since February 2020 as part of its commitment to its deal with the US (BBC, 7 May 2021). However, last week, the group announced that they may resume offensives against foreign forces, claiming that the US had already violated the deal by waiting to withdraw its troops until after the 1 May deadline (Afghan Voice Agency, 2 May 2021). US forces retaliated against the base attack with airstrikes targeting the Taliban’s rocket depots in Kandahar province. The withdrawal of US troops is rescheduled for 11 September; yet this retaliatory strike signals that US forces may continue to support Afghan state forces and will remain on high alert until their departure (Al Jazeera, 6 May 2021).

Last week, as in previous years, the Taliban and the Afghan government announced a three-day ceasefire to mark the beginning of the Muslim holiday, Eid Al Fitr, which will last from 13 to 15 May (Al Jazeera, 10 May 2021). Nevertheless, the Taliban’s offensives are likely to continue after the ceasefire. With its latest offensives, the group may be attempting to increase its leverage over the Afghan government, and now also foreign forces, before international troops leave the country in the upcoming months (Anadolu Agency, 8 May 2021).

In Pakistan, Taliban and Baloch separatist groups targeted security forces in Balochistan and Khyber Pakhtunkhwa (KP) provinces. Four personnel of the Pakistani paramilitary force Frontier Corps were killed in an ambush in Zhob district of Balochistan near the border with Afghanistan. In KP, a Pakistan army check post along the Afghan border in Bajaur tribal district was attacked by militants from across the border. Tehreek-i-Taliban Pakistan (TTP) claimed responsibility for both attacks on security forces (The Correspondent, 8 May 2021). The attacks may have been conducted to oppose fencing along the border. Pakistan is building a fence to secure its border, despite protests from Afghanistan that it would divide families along the Pashtun tribal belt (Reuters, 5 May 2021).

Baloch separatist groups were also active and killed two police officers last week, while injuring two others, in a roadside bomb explosion in the Mashkai area of Balochistan. The Baloch Republican Army (BRA) lobbed a grenade targeting Coast Guard forces in Pasni town, killing one officer and injuring several others. Baloch separatist militants have increasingly targeted security forces as a likely reprisal for security operations, which have resulted in the deaths and enforced disappearances of Baloch civilians (Eurasia Review, 4 May 2021).

Notably, last week, Pakistan and India accused each other of “unprovoked firing” and breaking their ceasefire agreement along the disputed Line of Control (LoC) (Anadolu Agency, 4 May 2021). The armed forces exchanged fire in Ramgarh sector area in J&K. This is the first cross-border exchange of fire since late February, when the two neighboring countries agreed to strictly observe the ceasefire (The Hindu, 26 February 2021).

Elsewhere in India, deadly clashes between political rivals were reported after the announcement of results for the state assembly elections in West Bengal and the conclusion of local elections in Uttar Pradesh. Post-poll violence escalated in West Bengal, with at least 27 people killed. The majority of casualties were members and supporters of the two major rival parties, the Trinamool Congress Party (TMC) and the Bharatiya Janata Party (BJP). TMC retained control of West Bengal state, with the centrally ruling BJP becoming the main opposition for the first time (Reuters, 5 May 2021).

The eight-phase-long polling process was marked by reports of election irregularities (The Indian Express, 7 May 2021). A significant number of the recent violent incidents took place in areas where the BJP had won in the elections. The BJP also organized nationwide demonstrations against alleged killings of its members in West Bengal by the TMC (Deccan Herald, 7 May 2021). A team of Home Ministry officials arrived in the state to investigate and visit violence-affected areas (The Hindu, 6 May 2021). In Uttar Pradesh, at least four people were killed as violence erupted over: alleged vote-counting fraud, officials withholding the announcement of results, and political rivalries (The Telegraph, 11 May 2021).

Lastly, as coronavirus infections continue to rise across South Asia, violence against health workers and clashes over coronavirus-related restrictions increased in the past week (BBC News, 9 May 2021). In multiple states in India, mobs assaulted health workers and hospital staff, holding them responsible for the death of their relatives, oxygen shortages, and vaccine distribution issues. Healthcare professionals appealed to the government to help overworked staff, who are also concerned for their safety, by boosting hospital recruitment (India Today, 3 May 2021). In Bangladesh, one person was killed during a dispute over the distribution of rice rations to fishermen amid the coronavirus pandemic. Shopkeepers and residents assaulted security personnel, who were enforcing lockdown measures and shutting down shops and markets in Pakistan and India.