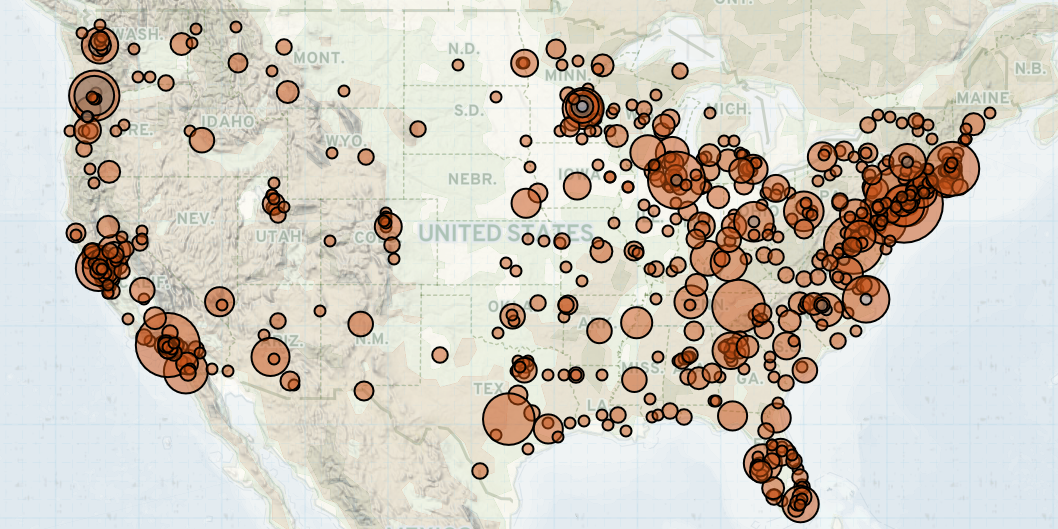 Demonstrations in the United States decreased last week for the second consecutive week, declining by approximately 11% compared to the week prior. The downturn is primarily driven by an over 50% decrease in demonstration events associated with the Black Lives Matter (BLM) movement. Demonstrations were held across the country for tribal communities last week, marking Missing and Murdered Indigenous Persons Awareness Day on 5 May. The COVID-19 pandemic and restrictions to limit its spread remain a consistent source of demonstrations. These demonstrations last week were dominated by calls to remove mask mandates in schools. Meanwhile, several demonstrations in support of former President Donald Trump were reported, highlighting an increasing trend of pro-Trump demonstrations five months after he has left office. Finally, several militia activity events were reported last week, including a patrol on the US-Mexico border.

Demonstrations associated with the BLM movement have drastically fallen over the last two weeks after a 2021 high when protests erupted in mid-April following the high-profile police killings of Daunte Wright, Ma’Khia Bryant, and Adam Toledo. Despite the decline, demonstrations related to the BLM movement continue to be peaceful and to account for the largest proportion of all demonstrations reported last week at 14%. One event last week turned violent after a man pulled a gun on armed pro-BLM demonstrators, leading to a brief standoff before demonstrators rushed, tackled, and disarmed the man without firing a round (RT, 7 May 2021).

As 5 May marks Missing and Murdered Indigenous Persons Awareness Day, demonstrations were held nationwide to call for justice. Demonstrations were reported in 11 states, with multiple events reported in Arizona, Minnesota, Montana, North Dakota, Oklahoma, Oregon, and Wisconsin. More than four in five Native Americans suffer violence in their lifetime, and Native women are murdered at a rate 10 times higher than the national average on some reservations (National Institute of Justice, 1 June 2016). On 4 May, President Joe Biden announced that his administration had formed the Missing & Murdered Unit (MMU) within the Bureau of Indian Affairs Office of Justice Services to facilitate cross-departmental and interagency tasks involving missing and murdered Native Americans (White House, 4 May 2021).

Demonstrations in support of former President Trump reached a new peak last week — the highest number recorded since the week following the inauguration of President Biden on 20 January 2021. Pro-Trump demonstrations last week included calls for supporting Trump from US Representatives Marjorie Taylor Greene and Matt Gaetz at the “America First” rally in Florida (Time, 8 May 2021). Bikers for Trump also held a rally hosted by Lin Wood, a pro-Trump lawyer who has pushed QAnon-linked conspiracy theories related to the 2020 presidential election, in South Carolina (Post and Courier, 2 May 2021). The increase in pro-Trump demonstrations comes as the former president seeks to retain his position as the leader of the GOP and to oust those viewed as insufficiently loyal, as evidenced by Liz Cheney being forced from her House leadership position for repeatedly fighting against rising populist trends in the Republican party, largely associated with Trump (CNBC, 12 May 2021).

Reported militia activity continued at lower levels last week than in weeks prior. The American Contingency continued to conduct firearm training events, including pistol and carbine training, in Nevada and Texas. Additionally, the Arizona Desert Guardians reportedly patrolled an area near Marana, Arizona to search for undocumented migrants near the US-Mexico border. The group claims to have found a scattering of bones near a trench that they claim is a trafficking route. Meanwhile, the Biden administration announced the cancellation of all border wall construction projects along the US-Mexico border on 30 April (USA Today, 30 April 2021).