Ten years since the start of the war in Syria, conflict dynamics vary across each region of the country. This report maps the latest conflict developments, with a focus on the northwestern, southern,1In April 2021, drawing from media sources, ACLED added more than 1,100 events to the dataset. The new data covers a range of events in the southern provinces of Dar’a, Al Quneitra, and As Sweida following the reconciliation agreement in southern Syria in August 2018.and eastern regions of Syria, including the impact of ongoing Israeli airstrikes.

ACLED data show that while conflict levels in northwest Syria plummeted when compared to those in 2019, the Idleb enclave remained one of the most unstable regions in the country in 2020. Nearly a third of all organized political violence events recorded in the country in 2020 occurred in Idleb. Meanwhile, discontent in the southern provinces, notably in Dar’a, remained a source of violence in the south. The Islamic State (IS) remained active in central and eastern Syria throughout the year, carrying out attacks in urban hubs, as well as in the Syrian desert. Lastly, Israel expanded the scope of its airstrikes in Syria in 2020 in response to Iranian entrenchment in the southern and central provinces.

The year 2020 began with a military campaign by regime and allied forces against the last stronghold of the opposition and Islamist factions in northwest Syria. The offensive, initially launched in mid-December 2019, resulted in significant regime advancements and the displacement of nearly one million civilians (Relief Web, 5 March 2020). By the end of February 2020, regime forces had secured the M5 international highway and the vicinity of Aleppo city, and encircled over 10 Turkish observation outposts (DW, 11 February 2020).

The escalation of fighting in northwest Syria brought about a confrontation between Russian-backed regime forces and Turkish troops — the most significant confrontation since Turkey’s direct military intervention in Syria in 2016. The deadly round of hostilities was triggered by an airstrike that targeted a Turkish position in Idleb’s Balyun area, killing 33 Turkish soldiers (BBC, 1 March 2020). Turkey responded by launching a counter-offensive aimed at reversing regime advances. Turkey’s use of drones caused significant losses to the regime and allied militia fighters. Shortly after, a ceasefire agreement was signed between Turkey and Russia on 5 March 2020 (The Guardian, 5 March 2020). 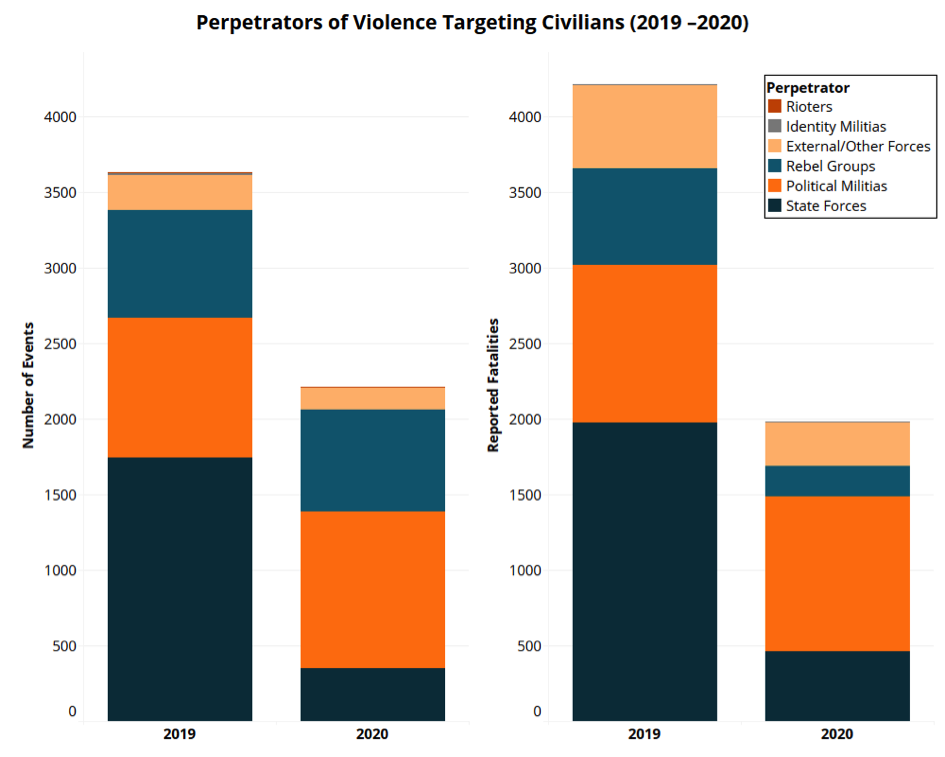 In addition to a ceasefire, the agreement between Turkey and Russia revolved around the status of the M4 highway, which remains under the control of Turkish troops and local factions. In line with the agreement, Turkish and Russian forces conducted numerous joint patrols on the M4 highway (Anadolu Agency, 15 March 2020). Russia later suspended its participation in August 2020 due to repeated attacks targeting the joint patrols. Some attacks were claimed by hardline Islamist factions, historically opposed to any ceasefire agreement that involves international actors. Other attacks were carried out by unidentified armed groups (Daily Sabah, 17 August 2020).

While hostilities between regime forces and opposition groups in northwest Syria have significantly dropped since March 2020, sporadic clashes and daily shelling barrages by the regime continued until the end of the year and into 2021. Attacks by regime forces and loyal militias against rebel factions and Islamist factions like Hayat Tahrir al Sham (HTS) increased again in mid-2020, coinciding with the resumption of Russian airstrikes in Idlib. These actions breached the ceasefire agreement intended to prevent further regime advancement in northwest Syria (see figure below). 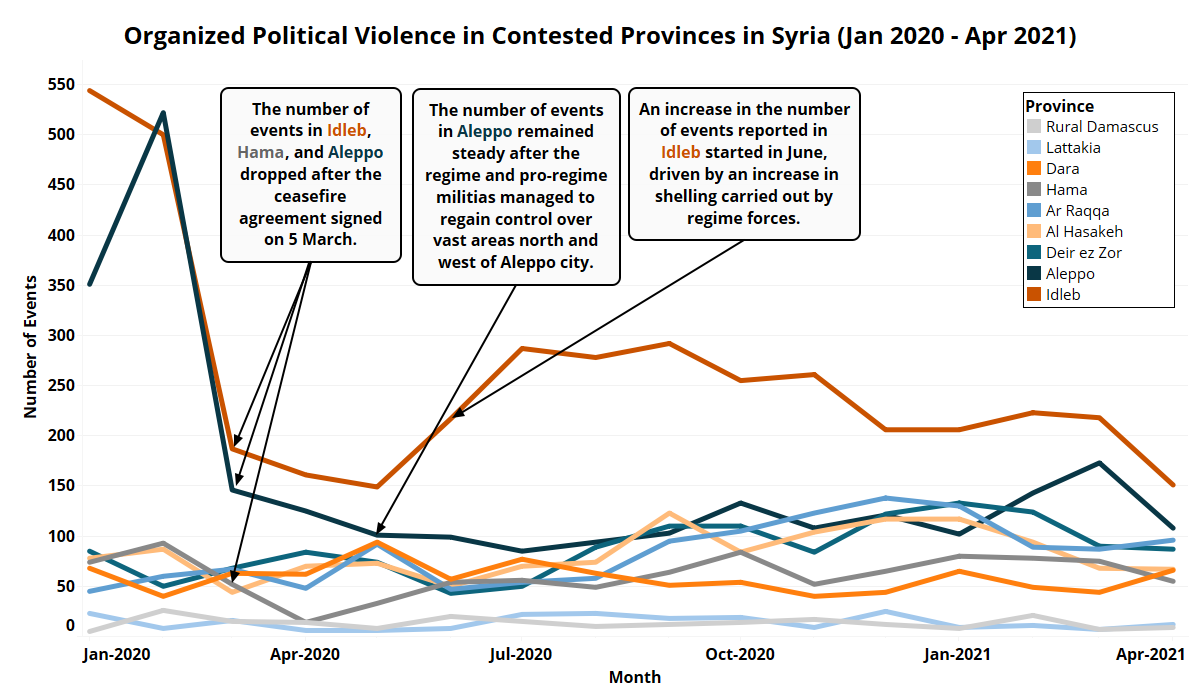 The March 2020 ceasefire agreement between Turkey and Russia — much like those before it — is thus almost certainly a temporary one. Regaining control of the whole of Syria — starting with the M4 highway — remains a top priority for the Syrian regime. The future of the agreement, and whether large-scale military operations will resume, is dependent on its guarantors Turkey and Russia and the ongoing negotiations between them. Until an unlikely breakthrough is achieved, daily violations of the ceasefire and deadly attacks are likely to continue.

Instability in the southern provinces of Syria, particularly in Dar’a, continued in 2020. There was a significant increase in organized political violence in southern Syria, as well as demonstration events. Dar’a province remained an important indicator of the Syrian regime’s inability to consolidate power following its takeover of the region in 2018. Regime forces remain unable to root out widespread anti-regime sentiment in the province.

To date, several pockets of Dar’a are governed by small local armed factions and dignitaries, as well as members of the Russian-backed 5th Assault Corps, which is made up of former opposition fighters. This has caused friction with the regime on numerous occasions, as it sees the mere existence of the factions as a major source of instability.

While a number of armed clashes and remote violence events were seemingly unprompted, many began in direct response to regime policies and human rights violations. The most significant of these violations was the arbitrary arrest by regime intelligence branches of civilians and former opposition fighters who opposed the regime and later accepted the Russian-engineered reconciliation agreement in 2018 (Financial Times, 28 April 2020). The reconciliation agreement allowed members of the rebel factions to stay in areas previously under their control in exchange for allowing Syrian regime institutions to operate in the southern provinces.

Throughout 2020, anti-regime demonstrations were reported in Dar’a calling for the release of prisoners, the expulsion of Iranian-backed militias, and even the toppling of the regime. ACLED records a 90% increase in demonstration activity across Dar’a province in 2020, with 91 demonstrations reported during the year compared to 48 in 2019 (see figure below). 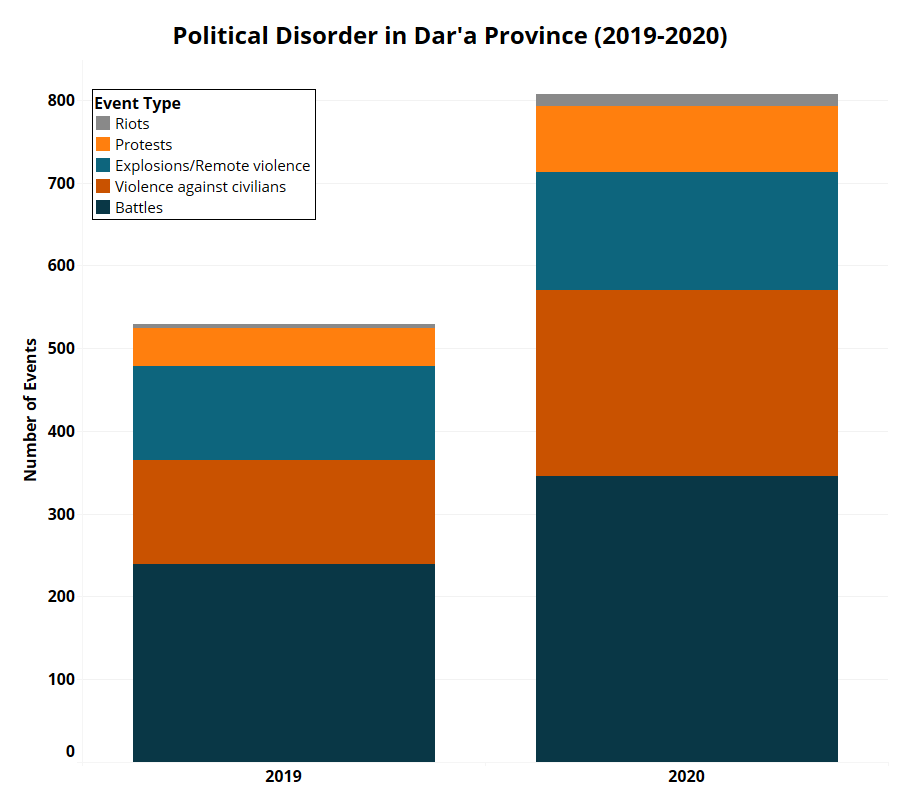 In both 2019 and 2020, clashes between IS and various Kurdish groups — including the Syrian Democratic Forces (QSD), People’s Protection Units (YPG), and Asayish — continued in QSD-held areas. In 2019, IS still maintained territorial control in some parts of eastern Syria, mainly in Deir-ez-Zor’s Al Bukamal and Al Mayadin districts. In 2019, 375 clashes were recorded between QSD and IS2While IS does claim some attacks, others go unclaimed. This analysis assumes UAG attacks are linked to IS activity due to the current situation in eastern Syria. in QSD-held territory. In 2020, ACLED records 274 clashes between QSD and IS in QSD-held territory, marking a 27% decrease when compared to 2019 (see figure below). IS remained active through its sleeper cells in QSD-held areas despite having lost territorial control. IS militants continued to launch assassinations and surprise attacks against Kurdish groups and against anti-IS operations that aim to eliminate IS remnants in northeast Syria. Such anti-IS operations have been led by QSD and the Global Coalition To Defeat IS (VOA News, 27 December 2020). 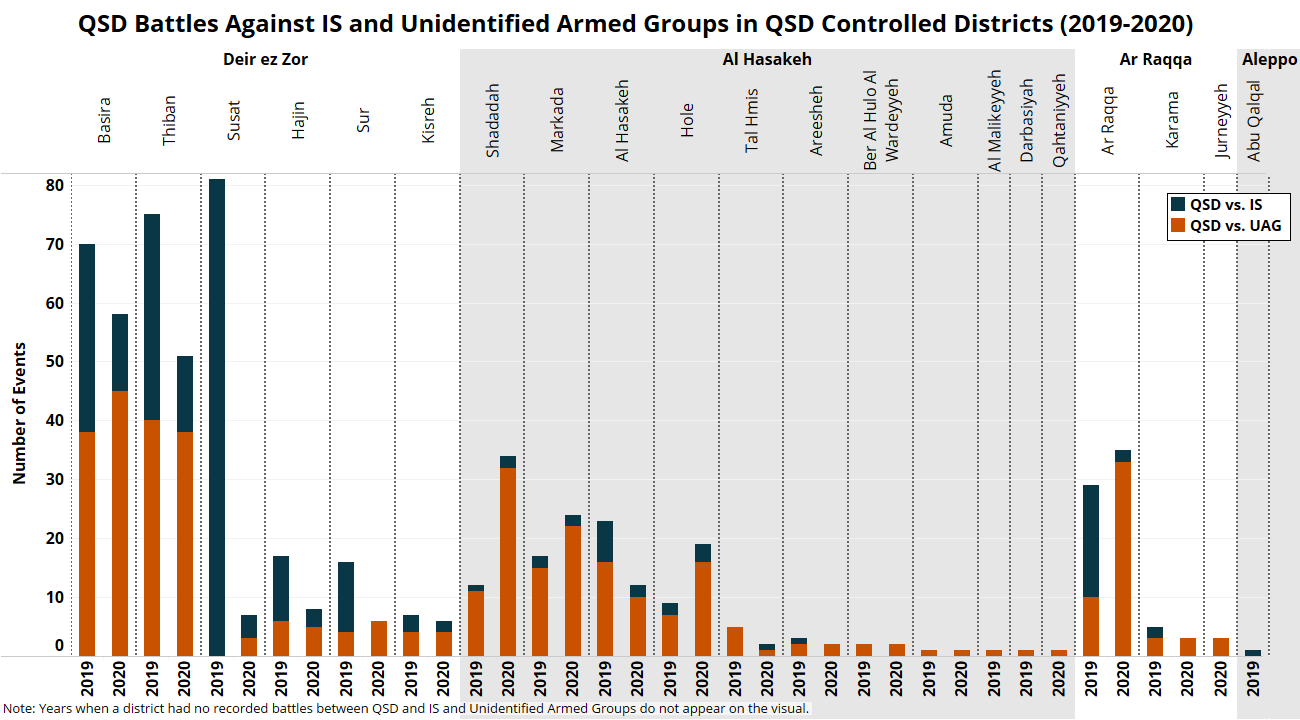 Meanwhile, the use of improvised explosive devices (IEDs) by IS and suspected sleeper cells declined in QSD-held areas in 2020 (see figure below). ACLED records 25 IED events and suicide bombings carried out by IS in QSD-held areas in 2020, marking a 74% decrease when compared to 2019. This is likely due to continued security operations by QSD — supported by the Global Coalition — against individuals with suspected IS affiliations across eastern Syria. 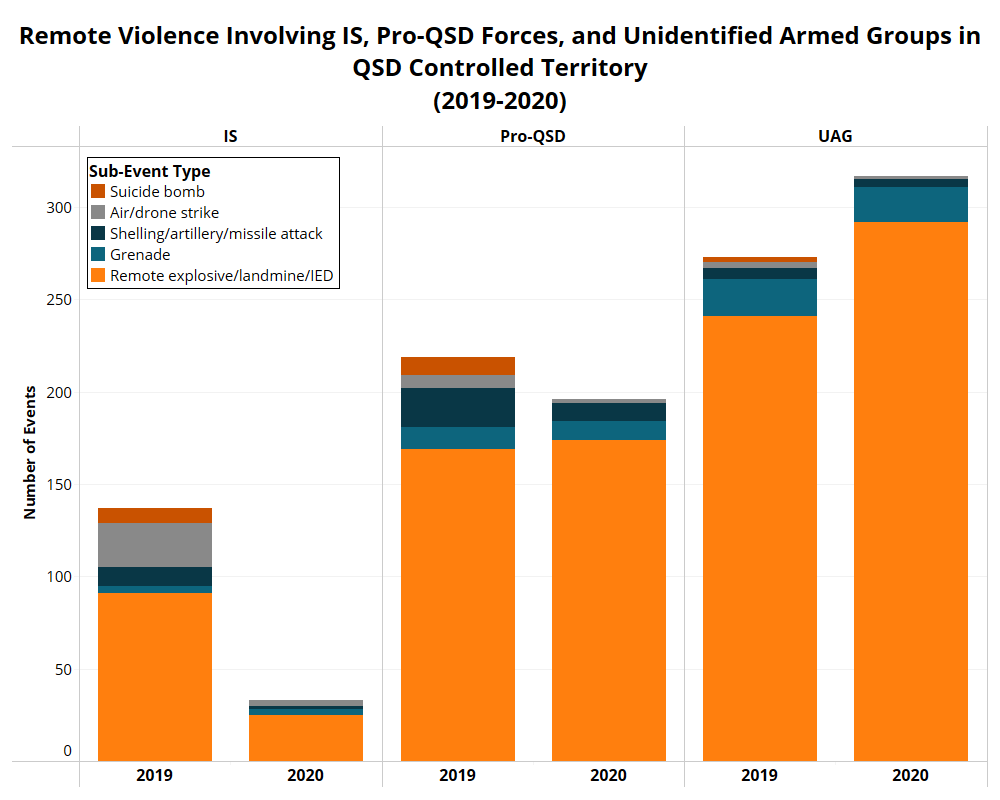 In 2020, Israel continued its targeted strikes in Syria against the positions of Iranian and pro-Iran forces. ACLED records nearly 90 Israeli missile strike events and/or aerial sorties in 2020, marking a 17% increase when compared to 2019. Israeli strikes in Syria have long been a deterrence tactic aimed at limiting Iran’s influence and entrenchment in the country and preventing weapons shipments to Hezbollah and Hamas (ABC News, 4 August 2020).

In 2019, the vast majority of Israel’s strikes occurred in the western and southern provinces in close proximity to the Syrian-Israeli border, with only some events recorded in northern and eastern Syria. In 2020, Israel increased its strikes further away from the border provinces (see maps below). While Iran continues to maintain a heavy presence in the southern provinces, the expanded scope of Israeli attacks appears to reflect the reality on the ground vis-à-vis the Iranian presence in eastern Syria. Deir-ez-Zor has over the years become an important hub for Iranian influence and weapons shipments from Iraq into Syria. The Iranian Islamic Revolutionary Guard Corps (IRGC) is entrenched in the province and enjoys significant influence. Similarly, foreign Shiite militia groups — such as Fatemiyoun Brigade and local factions, including Liwa Al Quds — also maintain a heavy presence. 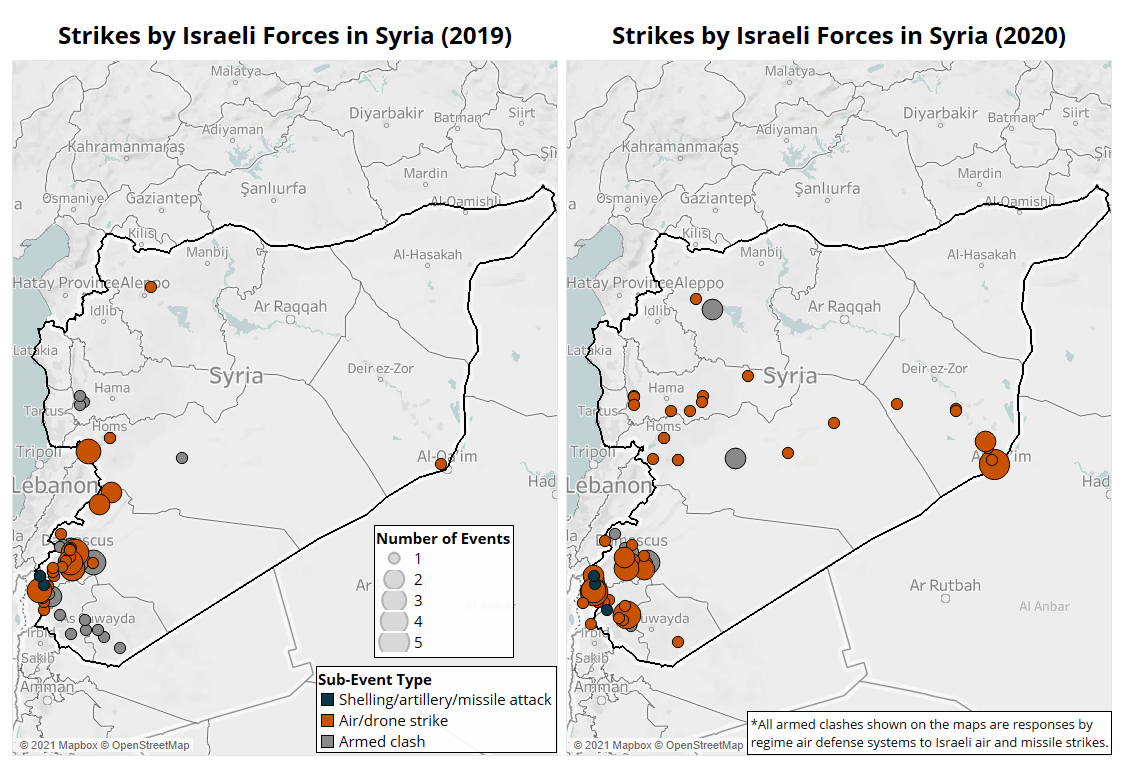 More broadly, tensions between the United States and Iran increased in 2020. Despite losing its staunchest White House ally — former President Donald Trump — Israel will most likely continue its attacks against Iranian forces in Syria in 2021 (Vao News, 22 January 2021). This dynamic is unlikely to be greatly affected by the less confrontational stance that President Joe Biden and his administration are expected to take toward Iran. In the first three months of 2021, Israeli forces conducted over 20 airstrikes and missile attacks mainly targeting the IRGC and pro-Iranian militias. The number of attacks thus far is on par with those in previous years. Iran’s entrenchment in Syria will likely remain a point of contention between Washington and Tehran.

The current trajectory of the Syrian conflict in 2021 is likely to be similar to trends recorded in 2020. While the status quo is expected to persist on many fronts across Syria, there remains potential for major escalation. The most worrisome is in the greater Idleb area, where the regime’s objective of regaining control of the whole of Syria — starting from the M4 highway — remains a top priority. The impact of a major resumption of hostilities in the northwest will almost certainly result in a humanitarian catastrophe and mass displacement, similar to the situations that resulted from previous regime offensives in the past. In this context, relations between Turkey and Russia, and their cooperation in the north of Syria, will remain the only deterrence in the face of continued hostilities. In eastern Syria, IS and affiliate sleeper cells will remain a major source of instability of the region. Israel will most likely continue its strategy in Syria in response to the ongoing Iranian presence, though the scale of the conflict may be contingent upon the relationship between the United States and Iran. Lastly, violence and instability are expected to remain a prevailing feature of southern Syrian dynamics: regime violations against civilians in the south and continued Iranian influence will likely invite more resistance, which in turn will lead to retaliation from the regime.