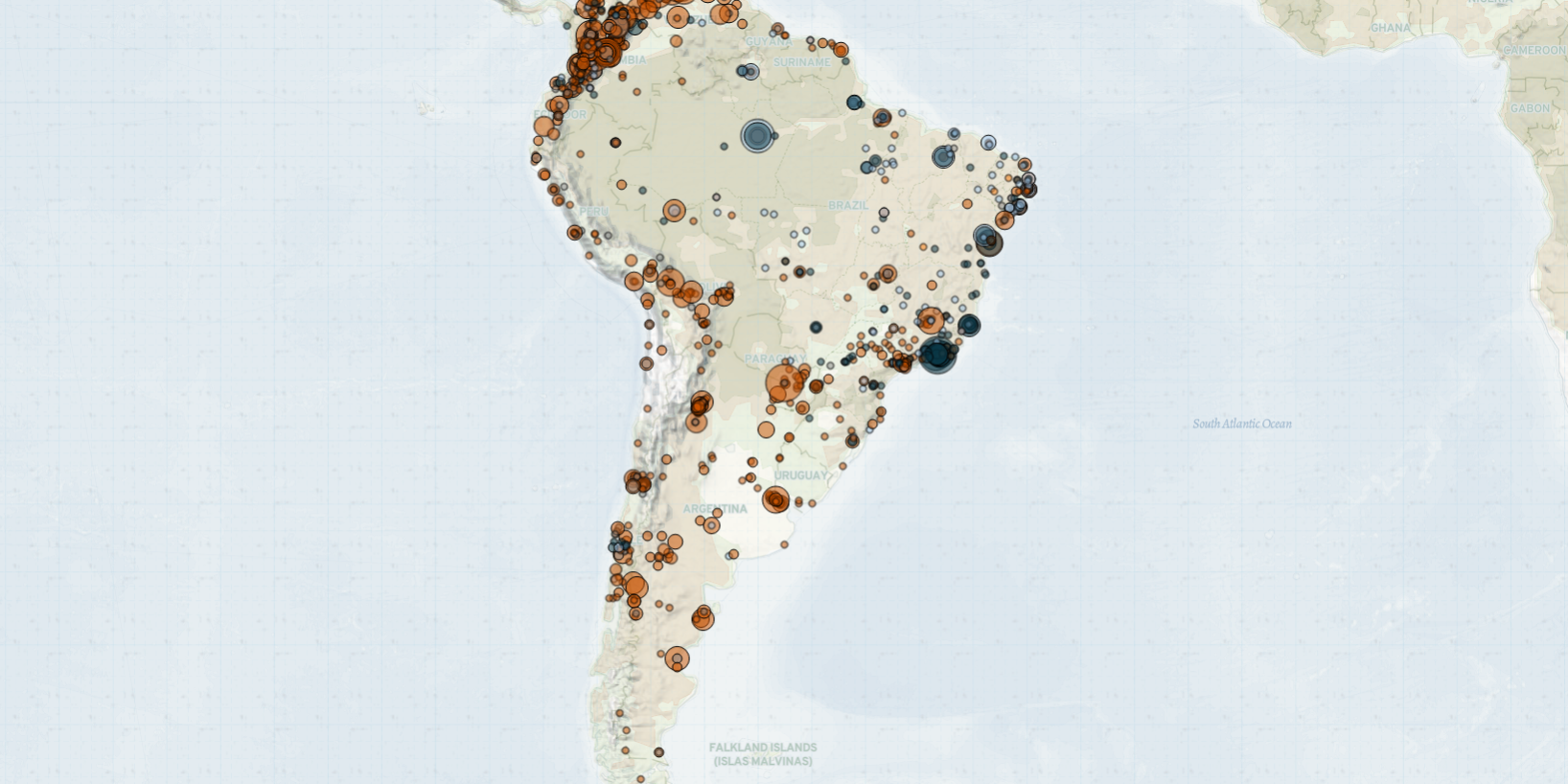 During the last two weeks in South America, citizens continued to hold anti-government demonstrations in Colombia. In Argentina, people protested as the government announced strict coronavirus lockdown measures as infections soar. In Chile, a constituent assembly was elected to write a new constitution, while protests were held against Israeli attacks on Gaza during the ongoing Israeli-Palestinian conflict. In Venezuela, the leader of a dissident group of the Revolutionary Armed Forces of Colombia (FARC) was killed in a clash against another dissident group. In other developments, FARC dissidents have abducted eight Venezuelan military soldiers. Lastly, gold miners opened fire against the Yanomami indigenous community in Brazil.

In Colombia, anti-government demonstrations continued into the fourth consecutive week last week, albeit with less intensity. Over the past two weeks, the number of reported demonstration events decreased by a quarter compared to the previous weeks. Demonstrators, who had initially rallied against tax reform, have extended their demands to include education, health, and security reforms, among other issues. As coronavirus infections continue to rise in Colombia, citizens also took to the streets to express their anger against inequality and poverty amid a growing economic crisis (New York Times, 18 May 2021).

Meanwhile, reports of violence during demonstrations continued in the city of Bogotá and in the Valle del Cauca department, with demonstrators vandalizing, looting, and burning government buildings and monuments. Clashes between the Mobile Anti-Disturbances Squadron police forces (ESMAD) and demonstrators continue to be reported in several cities. Since the beginning of the unrest on 28 April, at least 43 people have been killed by police forces, according to local NGOs (Indepaz, 23 May 2021). The government, however, has confirmed only 26 deaths (CNN, 21 May 2021). International organizations have raised concerns over growing accusations of excessive violence by state forces, including sexual violence, the use of lethal ammunition against protesters, and the forced disappearances of civilians (Civil Rights Defenders, 21 May 2021).

In Argentina, President Alberto Fernández decided to resume strict lockdown measures until 31 May, in light of a second wave of the coronavirus. On 18 May, the country exceeded its daily record of infections and deaths, with 35,543 new cases and 745 deaths (DW, 19 May 2021). Similar infection rates have been reported in subsequent days since then (Reuters COVID-19 Tracker, 25 May 2021). Nevertheless, citizens took to the streets to demand the re-opening of businesses and in-person classes (La Nación, 20 May 2021).

In Chile, elections for local government and municipal mayors were held across the country on 15 and 16 May. The electoral process includes selecting the 155 members of the Constituent Assembly, who will draft the new constitution. Independent candidates and opposition parties secured the vast majority of the seats (The Guardian, 18 May 2021). The center-right ruling coalition, backed by President Sebastian Piñera, failed to secure one-third of the seats: the required proportion to be able to block the inclusion of progressive articles in the constitution (The Guardian, 18 May 2021). In October 2020, the majority of the population voted to replace the current constitution, which has been in effect since the Augusto Pinochet dictatorship. The Pinochet-era constitution was drafted without popular input during the military dictatorship and was approved in a rigged plebiscite in 1980.

In Venezuela, eight military soldiers were abducted and unlawfully imprisoned by the 10th Dissident Front of the FARC in Apure state (El Pitazo, 22 May 2021). The group claims to have captured the soldiers on 23 April and has, as of late, written a letter to the International Committee of the Red Cross (ICRC) in which they appeal for their intermediation in handing over the soldiers (Fundaredes, 24 May 2021).

Meanwhile, armed clashes took place between the FARC dissident factions Gentil Duarte and Segunda Marquetalia (Caraota Digital, 18 May 2021). Both groups dispute control of drug trafficking routes and mineral exploitation in Apure, Zulia, Amazonas, and Bolívar states (La Patilla, 18 May 2021). On 17 May, 14 combatants of the Segunda Marquetalia front were killed in a clash against the Gentil Duarte front (Caraota Digital, 19 May 2021). Among the victims was the leader of the Segunda Marquetalia, Seuxis Pausias Hernández Solarte, known as Jesús Santrich. Santrich had once supported the 2016 Peace Agreement with the Colombian government, but then turned against the peace deal and returned to arms. Santrich’s presence in Venezuela had been pointed to as evidence of how deeply FARC dissidents have penetrated the country (The New York Times, 18 May 2021).

Finally, in Brazil, a series of attacks and clashes took place on Yanomami indigenous land. On 10 May, illegal gold miners opened fire against indigenous people at Palimiú village, located inside the Yanomami Indigenous Reserve in the Roraima state. The Yanomami people responded with bows and arrows and shotguns. This incident was the starting point of a week-long string of attacks on the village. Two Yanomami children were found dead in the Uraricoera River two days after the initial clash (G1, 17 May 2021). Additionally, at least five miners died in the first clash, and three were wounded. The miners who perpetrated the attack are reported to be associated with First Capital Command (PCC), the largest organized crime group in the country (Amazônia Real, 10 May 2021). The PCC controls drug trafficking activities in Roraima state and conducts joint activities with illegal gold miners on indigenous lands (Amazônia Real, 10 May 2021).