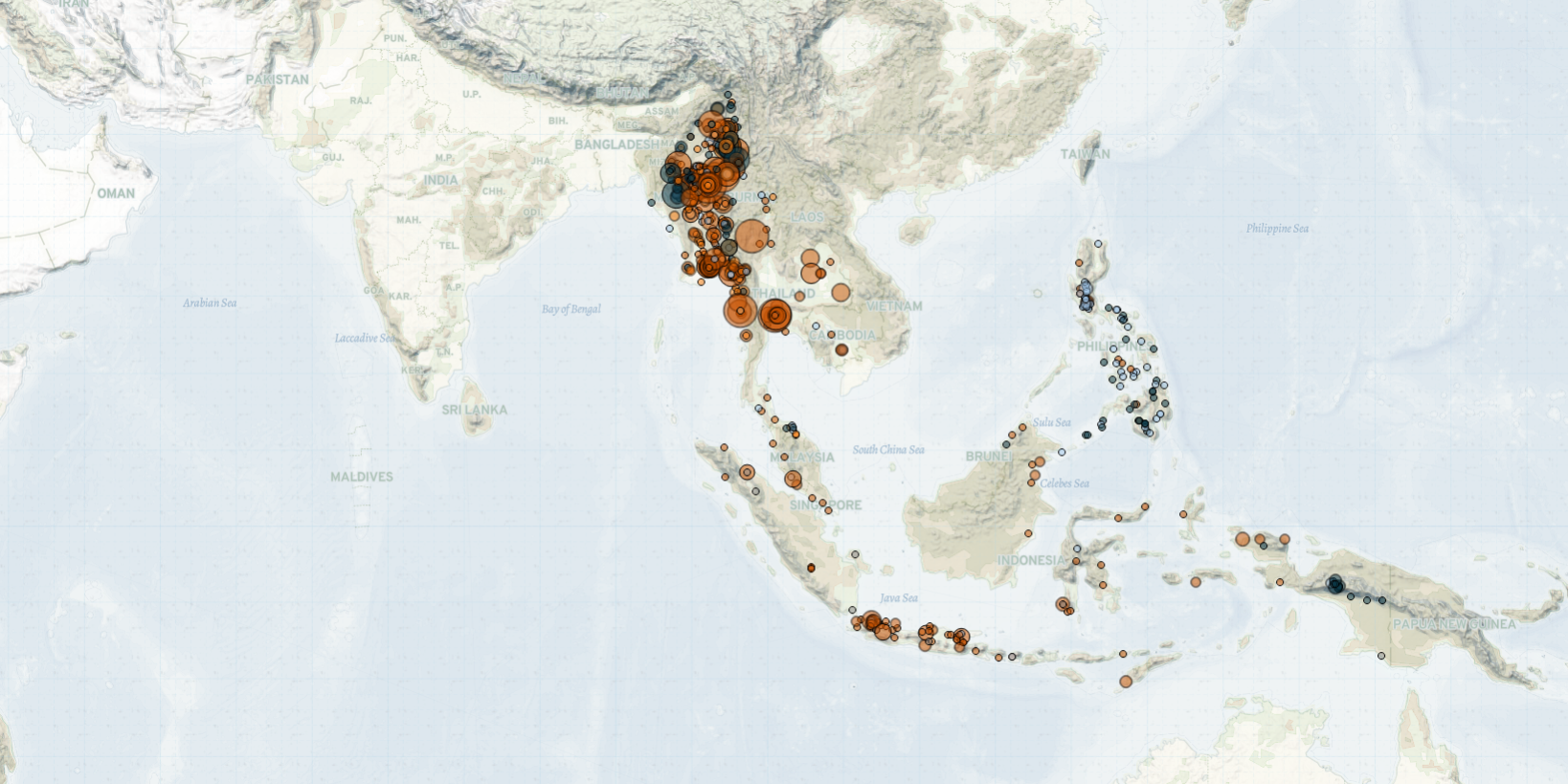 Over the last two weeks in Southeast Asia, demonstrations against the military coup in Myanmar continued as anti-coup protesters marked the 100th day of military rule in the country. Although such demonstrations have gradually been decreasing over the weeks following deadly crackdowns by the junta, armed resistance against the junta has been increasing. Over the last two weeks, days-long battles between the Myanmar military and armed resistance groups were reported in Chin state. Meanwhile, following the National Unity Government’s (NUG) announcement of the establishment of a People’s Defense Force (PDF), dozens of resistance groups pledging to fight under the PDF banner have been formed in townships across the country. Additionally, fighting between the Myanmar military and ethnic armed organizations (EAOs) continues unabated in several states, including in Kachin, Kayin, and Shan states. Elsewhere, in the Philippines, an increase in deadly clashes between Islamist groups and state forces was reported. Fighting between state forces and Papuan separatists also increased in Indonesia. This comes alongside increased protests against the Indonesian government’s treatment of Papuan separatist groups. Lastly, demonstrations in solidarity with Palestine were held by Muslim groups across the region.

In Myanmar, anti-coup supporters marked the 100th day of the coup on 11 May by rallying in the streets to oppose the military junta. Mass demonstrations across the country have been ongoing for more than three months. More recently, demonstrators have adopted a flash-mob style of protest where they gather and disperse quickly so as to avoid a response by the military. The seizure of power by the military on 1 February has plunged the country into turmoil, drawing strong international criticism for the military’s violent crackdowns against anti-coup demonstrators and activists. More than 800 demonstrators and civilians have been killed by the military junta forces to date, according to data from the Assistance Association of Political Prisoners (AAPP) (AAPP, 21 May 2021).

Additionally, local self-organized resistance groups have been formed in dozens of townships under the People’s Defense Force (PDF). Many of these groups have pledged to fight under the leadership of the NUG (Irrawaddy, 10 May 2021; Myanmar Now, 20 May 2021). The formation of the PDF was formally announced by the NUG on 5 May. Over the last two weeks, clashes between the Myanmar military and different local PDF groups were reported in Kayah state, and in Magway, Mandalay, and Sagaing regions.

In the Philippines, an increase in Islamist violence was reported in Mindanao. Notably, clashes between state forces and the Bangsamoro Islamic Freedom Fighters (BIFF) took place in Maguindanao province. While early reports said the rebels had occupied the public market in Datu Paglas town, later reports confirmed that they had only been passing through to look for food, but got stuck when security forces surrounded the area (Sunstar, 9 May 2021; Rappler, 8 May 2021). During the shootout, the military received air support to pursue the rebels, who fled without any fatalities. However, follow-up operations a few days later led to the killing of five BIFF militants in a neighboring town. The deadly battle comes shortly after President Rodrigo Duterte warned of an “all-out offensive” against the BIFF should violence continue (Philippine Daily Inquirer, 11 May 2021).

Meanwhile, deadly clashes between state forces and Abu Sayyaf (ASG) fighters also took place in Mindanao in the Philippines, as well as across the Sulu sea in Sabah state, Malaysia. The clashes, which took place over a span of four days, resulted in nine ASG fighters being killed. Five of the fighters, including an ASG sub-leader, were killed by Malaysian police in Sabah state, where they had reportedly been sheltering in a squatter settlement. This comes after Malaysian police, with assistance from the Philippine military, carried out a mass arrest of ASG fighters and their family members in the same state (The Star, 11 May 2021). The arrested militants were allegedly planning to carry out kidnappings for ransom (Reuters, 10 May 2021).

Elsewhere, clashes between state forces and the separatist West Papua National Liberation Army (TPNPB) also increased in Papua province, Indonesia. Multiple clashes, which resulted in deaths on both sides, took place over the past two weeks, primarily in Puncak regency. Alongside the clashes, reports of rebels setting fire to public buildings and security forces shooting at villagers’ homes have displaced thousands of villagers in Papua province (Human Rights and Peace for Papua, 14 May 2021).

Amid the increasing instability in West Papua, Papuans continue to protest against the extension of the region’s Special Autonomy Status and the Indonesian government’s labelling of Papuan separatists as “terrorists” (Benar News, 29 April 2021). Beyond concerns of heightened military tension, the labelling of Papuan separatists as “terrorists” has raised concerns of increased discrimination against Papauns across Indonesia (The Star, 3 May 2021). Protests also increased following the 9 May arrest of the National Committee for West Papua (KNPB) spokesperson, Victor Yeimo, for committing treason as he allegedly masterminded the 2019 riots that broke out in West Papua (Jakarta Post, 10 May 2021). If convicted of treason, he could be sentenced to life imprisonment. Papuan students in several cities across the country carried out coordinated protests to call for Yeimo’s release.

Finally, despite strict movement restrictions to curb rising coronavirus infections, Muslims across the region took to the streets to show solidarity with Palestine in light of the increased conflict between Israel and Palestine. In Indonesia, hundreds of demonstrators gathered in dozens of cities to demand that Israel stop its aggression against Palestine (Tribun News, 21 May 2021). They condemned the situation in Palestine as “humanity’s worst tragedy” (Jakarta Globe, 19 May 2021). Likewise, in the Philippines, around 500 Muslim youth protested in Marawi city to call for an end to the violence in Palestine (Philippine Daily Inquirer, 21 My 2021). Similar protests were held by Malaysian Muslims in front of the United States’ Embassy in Kuala Lumpur.