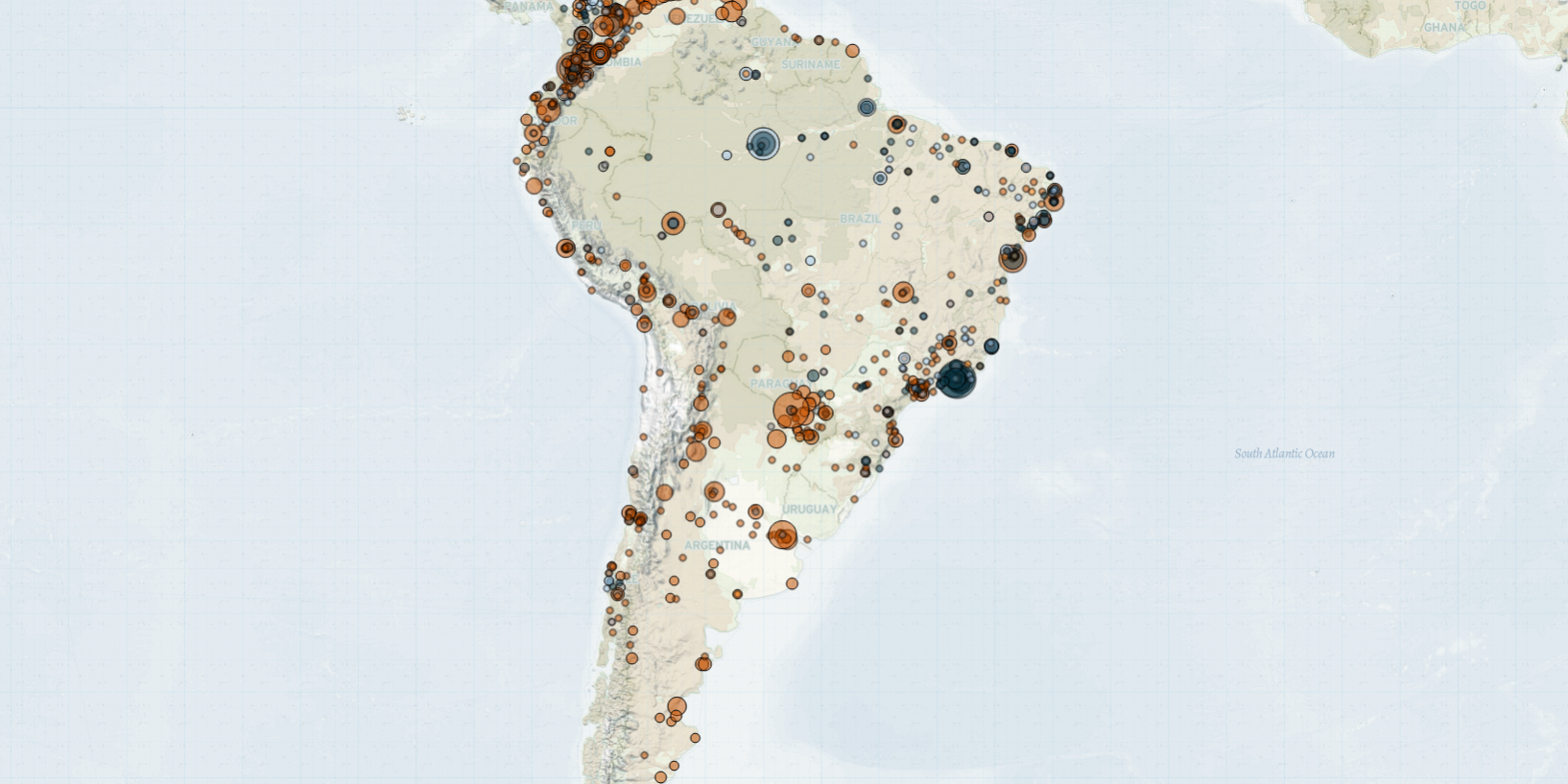 Last week in South America, nationwide anti-government demonstrations continued to be held in Colombia, while Argentinians also took to the streets to protest against their government. In Peru, demonstrations continued amid a contested vote counting process for the presidential elections. In Brazil, the leader of the largest police militia in Rio de Janeiro was killed in an ambush led by the civil police. Meanwhile, armed gold miners linked to organized criminal groups carried out attacks in the Yanomami Indigenous Territory, in the Amazon region of Brazil. In Chile, violence levels also increased as suspected indigenous militias clashed with state forces.

In Colombia, anti-government demonstrations continued last week for the seventh consecutive week, although events decreased by about half compared to the previous week. On 15 June, the National Strike Committee (Comité Nacional de Paro, in Spanish) announced it would be formally suspending protest activity until 20 July (El Pais, 15 June 2021). The announcement came as the Ministry of Defense reported that all major roadblocks across the country had been successfully cleared, except for those in the city of Santiago de Cali (El Colombiano, 15 June 2021). Despite these changes, however, many students and indigenous groups indicate they do not agree with the decision of the committee and will continue to hold demonstrations until all of their demands are met (RCN Radio, 15 June 2021). Among several demands, the protests revolve around calls for changes in the education, health, and security policies of the country.

Additionally, levels of political violence increased in Colombia last week, with clashes between state forces and rebel groups reported in the departments of Arauca, Cauca, and Norte de Santander. In Cúcuta city, a militant from the National Liberation Army (ELN) infiltrated a military installation and activated a car bomb that wounded 36 Colombian soldiers. A group of military personnel from the United States were present at the base at the moment of the attack, but they were not harmed. The soldiers were there to conduct joint training exercises with Colombian personnel (The Washington Post, 15 June 2021).

Anti-government demonstrations also took place in Argentina, with thousands of people taking to the streets in the capital of Buenos Aires on 18 June (La Nación, 18 June 2021). The massive protest, led by civil society organizations and left-wing groups, called for coronavirus vaccines for all citizens, and for the greater provision of food to local meal centers. Protesters also criticized the government’s handling of the economic crisis faced by the country. Argentina has a chronically high inflation rate, and 42% of the population now live under the poverty line (Al Jazeera, 27 May 2021).

Meanwhile, protests were reported in Peru amid a contested vote count following the presidential election held on 6 June. Right-wing candidate Keiko Fujimori continues to claim, without clear evidence, that the count was marred by electoral fraud in favor of left-wing candidate Pedro Castillo. The vote counting was finalized, with Castillo having more than 50% of votes (The Guardian, 20 June 2021). However, the winner will only be officially declared by the National Electoral Office once they analyze the requests of annulment for some ballots, filed by both parties (El Comercio, 22 June 2021). In Puno and Lima provinces, supporters of Castillo and his party, Free Peru, staged protests against the allegations brought up by Fujimori.

In Brazil, civil police officers killed Wellington da Silva Braga, known as Ecko, the leader of the Bonde do Ecko militia, in a police operation in the Paciência neighborhood of Rio de Janeiro. Formerly known as the Justice League (Liga da Justiça, in Portuguese), the group is the oldest and largest militia group in Rio de Janeiro, with widespread control in the West Zone of the city and nearby areas. Police militias were first created by former and serving police and military officers under the banner of fighting drug trafficking activities. They also offer the illegal provision of basic services through the collection of security fees, and often have connections with political authorities. Despite Ecko’s death, analysts claim that militia activities in the city will likely continue without many disturbances, with his leadership soon to be replaced (El Pais, 18 June 2021). This scenario is reinforced by the lack of effective and long-term policies to fight the group, along with an indulging attitude from authorities towards police militias (El Pais, 18 June 2021) (for more, see this ACLED infographic: National and Local Tensions in Brazil).

Meanwhile, tensions increased once again in the Yanomami Indigenous Territory in the north of Brazil, with two attacks reported in the Palimiú community of Roraima state last week. Miners associated with and financed by the criminal group First Capital Command (PCC) opened fire against Yanomami indigenous people, who fled into the forest in order to escape (G1, 18 June 2021). A series of attacks have been carried out in Yanomami land since May this year, with the National Force sent to the area to curb the rampant violence. Last week, members of different indigenous ethnicities carried out protests across the country to express their dissatisfaction with a federal bill aimed at regulating indigenous land demarcation. The bill would favor agribusiness and the predatory economic exploitation of their lands (Câmara dos Deputados, 16 June 2021).

Finally, in Chile, political violence increased twofold last week, compared to the previous week. The increase was mainly driven by armed clashes between security forces and suspected indigenous militia groups in the Biobío region, with at least one police officer injured in the violence (Biobio Chile, 16 June 2021). In the Cañete area of Biobío, a firefighters unit was caught in the crossfire between police forces and indigenous militiamen, as the group responded to a call to control an arson attack on a nearby farm (Biobio, 16 June 2021). Tensions between indigenous groups, specifically the Mapuche people, and the Chilean government have simmered for decades over questions of land reform and discrimination (for more, see ACLED’s analysis piece: Understanding Indigenous Conflict in Chile).