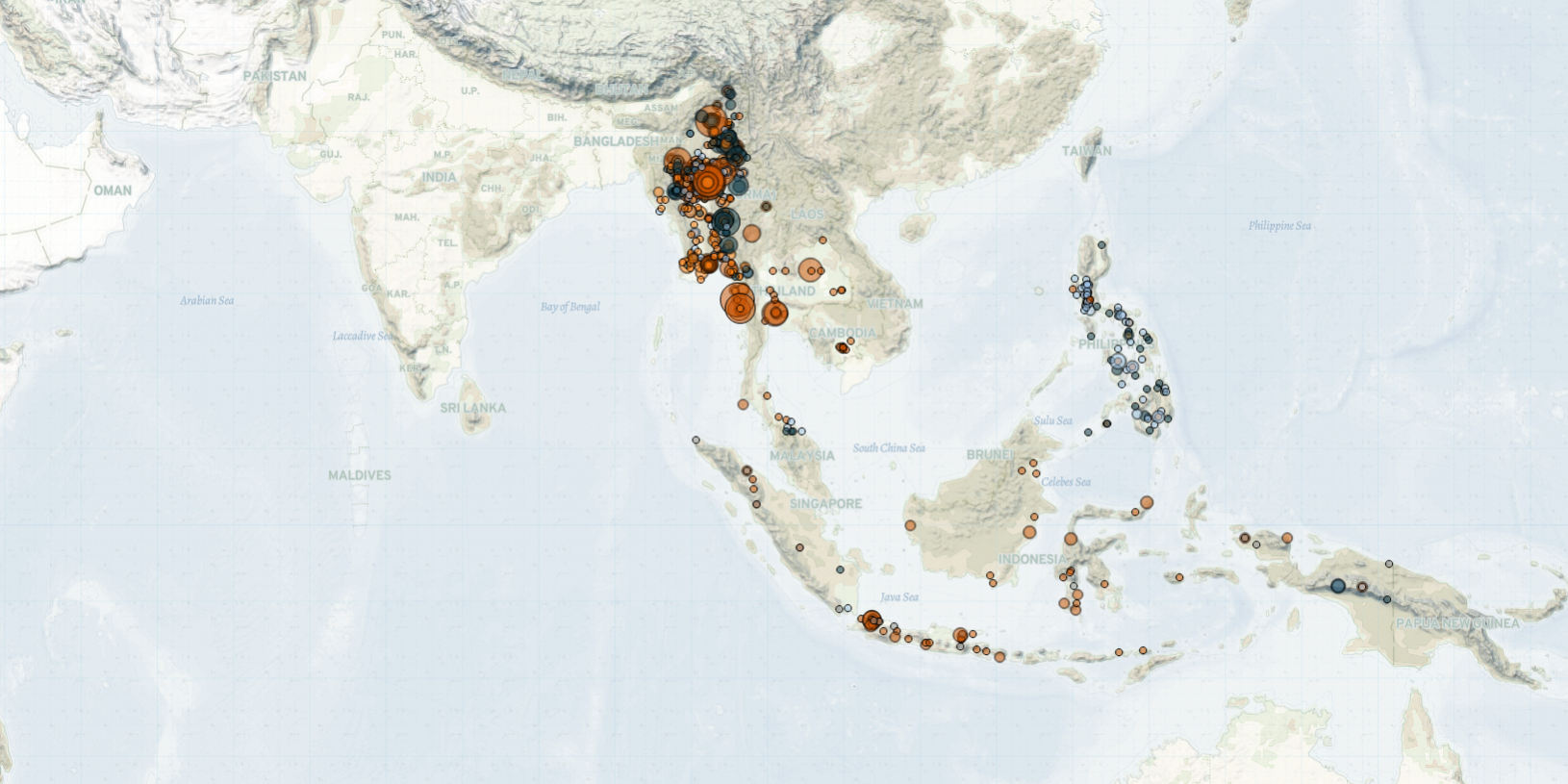 Last week in Southeast Asia, protests against the military coup in Myanmar continued across the country as protesters expressed an unusual show of support for the Rohingya ethnic minority. Additionally, the Myanmar military accused the Karen National Defence Organisation (KNDO) of killing civilians, after claiming to have discovered mass graves in Kayin state. Elsewhere, fighting between the Myanmar military and ethnic armed organizations (EAOs) decreased. Clashes in Kayah state also decreased after the military and the Karenni Nationalities Defence Force (KNDF) agreed to a ceasefire. In the Philippines, the separate killings of two minors by state forces, as part of the ongoing ‘war on drugs’ and operations against the communist New People’s Army (NPA), sparked widespread controversy.

In Myanmar, anti-coup supporters continue to protest against the military regime, with the majority of protests concentrated in Mandalay, Sagaing, Tanintharyi, and Yangon regions. On 13 June, protesters staged a rally in Yangon, holding placards to show support for “the oppressed Rohingya” (CNA, 14 June 2021). The protest coincided with the “#Black4Rohingya” social media campaign launched by activists on the same day, encouraging people to share photos of themselves expressing solidarity with the persecuted ethnic minority group. The public show of support marked a stark difference from past years, where recognition of the term “Rohingya” itself was controversial (Al Jazeera, 14 June 2021). The campaign comes after the National Unity Government (NUG) — formed by a committee of deposed lawmakers — pledged to grant citizenship for the Rohingya under a future democratic Myanmar (Frontier Myanmar, 3 June 2021).

Also in Yangon, a grenade was reportedly hurled into a military vehicle carrying security forces, killing a police officer and wounding several others (DVB, 18 June 2021). As with most other similar attacks against the military and military supporters, no party has claimed responsibility for the attack. Meanwhile, targeted attacks against military and police personnel, military informants, local administrators, and members of the military-backed Union Solidarity and Development Party (USDP) continued across Myanmar.

Elsewhere, regime forces reportedly torched a village in Magway region with over 200 houses, killing two elderly residents (Myanmar Now, 16 June 2021). The incident drew condemnation from the Myanmar public and diplomatic missions in Myanmar, including the UK and US (Irrawaddy, 22 June 2021). State media sources rejected the claim, instead attributing the fire to “terrorists”, stating that any media reporting differently were “deliberately plotting to discredit the military” (BBC, 17 June 2021).

In another war of words, the junta accused the KNDO — one of the armed groups under the Karen National Union//Karen National Liberation Army (KNU/KNLA) — of killing civilians, claiming to have uncovered two mass graves with 25 bodies in a forest clearing in Kayin state (Reuters, 18 June 2021). State-run media reported that the 25 civilians belonged to a group of 47 people who were abducted by the KNDO on 31 May. The KNDO has since refuted the allegations, alleging that the 25 victims were Myanmar military soldiers gathering information about military training conducted in KNU territory (RFA, 18 June 2021). In response, the KNU/KNLA pledged to conduct investigations into the allegations by the junta (Straits Times, 18 June 2021).

Elsewhere, fighting between the Myanmar military and EAOs decreased, with clashes mainly concentrated in Kachin and northern Shan states. Meanwhile, in Kayah state, the KNDF and the Myanmar military agreed to a ceasefire on 15 June following talks between both sides. Nonetheless, the KNDF says it would continue to oppose the military in other ways (Myanmar Now, 16 June 2021). This comes after weeks of heavy fighting between both sides that has displaced over 100,000 civilians (Myanmar Now, 16 June 2021). Following the ceasefire, locals returned to villages that had been ransacked, and found more than a dozen decomposed bodies (Irrawaddy, 18 June 2021).

In the Philippines, there was an increase in drug-related violence against civilians last week, predominantly perpetrated by police. In a particularly high-profile case, police officers killed a minor in Binan city, Laguna province. They allege that he and his older companion had exchanged fire when they attempted to serve an arrest warrant to the older man (Philippine Daily Inquirer, 22 June 2021). Such allegations are commonly used by police to justify extrajudicial killings of drug suspects (Human Rights Watch, 2 March 2017). However, relatives of the slain teenager strongly refute the police’s account of the incident, citing witness testimony that the boy had been shot while handcuffed and lying face down (Rappler, 18 June 2021).

The boy’s death comes just two days after the Prosecutor of the International Criminal Court (ICC) announced that she had requested authorization to proceed with an investigation into the “situation in the Philippines,” particularly in the context of the ‘war on drugs’ (ICC, 14 June 2021). Preliminary examinations carried out by the Prosecutor’s Office conclude that “there is a reasonable basis to believe that the crime against humanity of murder has been committed…between 1 July 2016 and 16 March 2019” (ICC, 14 June 2021). Additionally, it found that members of the Philippine National Police “have unlawfully killed between several thousand and tens of thousands of civilians” during the same period, the start of which coincides with President Rodrigo Duterte’s assumption of office (ICC, 14 June 2021). Human rights groups and survivor support groups, many of whom have long been pinning their hopes of securing justice for victims of the drug war on the opening of an ICC case, celebrated the prosecutor’s announcement. In response to the announcement, the Philippine government criticized the prosecutor’s request for judicial authorization as “legally erroneous” and “politically motivated” (Philippine Star, 15 June 2021). It also vowed not to cooperate with the investigation “as long as President Rodrigo Duterte is in power” (Philippine Star, 15 June 2021).

Finally, also in the Philippines, three Lumad people — including two females, one of whom was a 12-year-old girl — were shot dead by the military amid ongoing government efforts to quell the NPA communist insurgency. The bodies of the girl and the woman bore signs of rape, and all three bodies were almost “beyond recognition” (Davao Today, 18 June 2021). According to Lumad advocacy groups, the victims were harvesting abaca at a farm with several others when the soldiers opened fire (Davao Today, 18 June 2021). However, the military insists that the victims were members of the NPA, and that all three of them had exchanged fire with the soldiers. It also claims that the NPA was using the girl as a child soldier (PNA, 16 June 2021), although this has been heavily disputed by locals and advocacy groups (ABS-CBN, 18 June 2021). Since the start of the Duterte administration, at least 34 Lumad people have been killed by state forces.