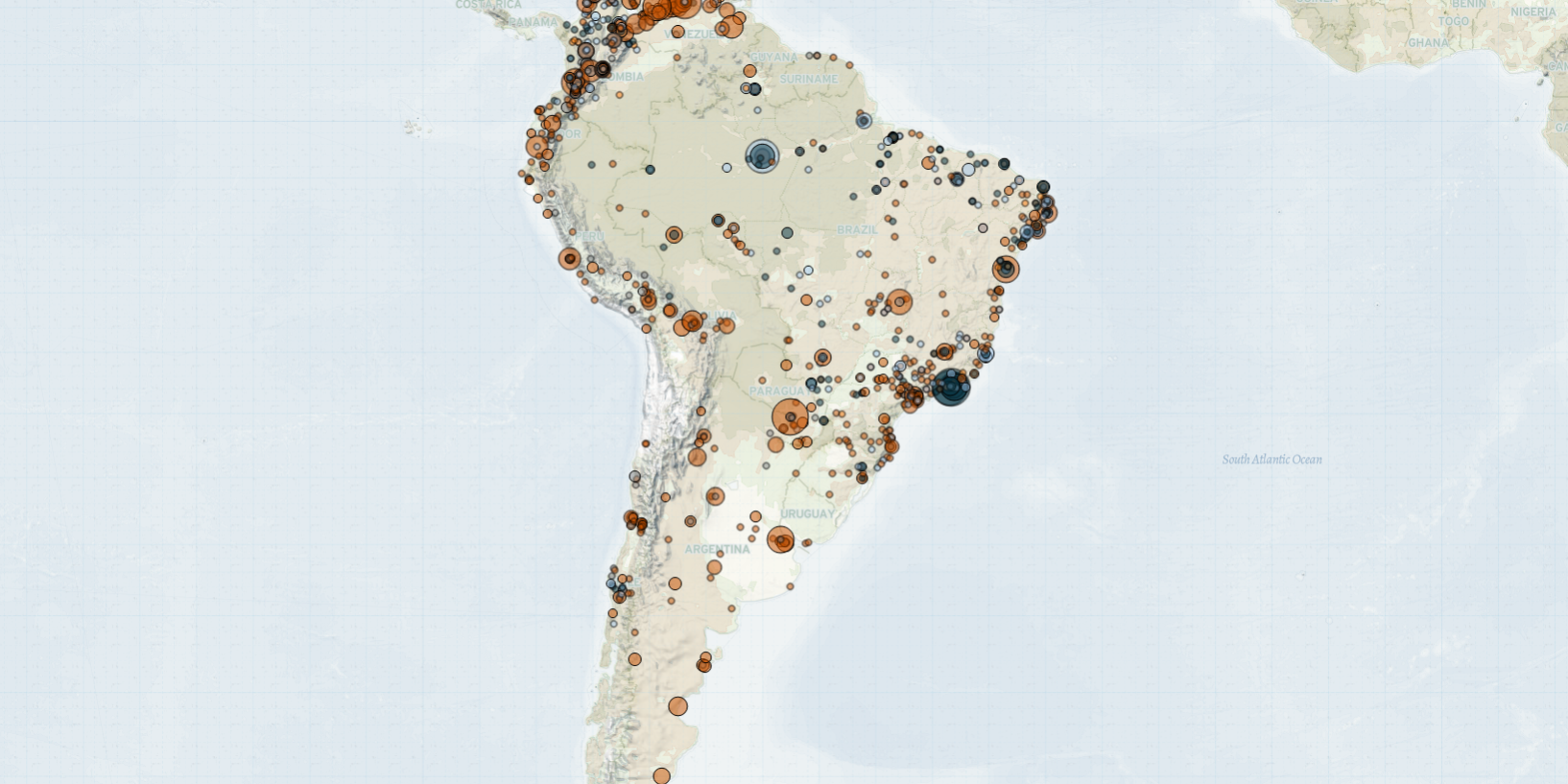 Last week in South America, protests supporting the LGBT community were reported across the region during International Pride Day on 28 June. In Colombia, political violence remained at high levels last week. Meanwhile, demonstrators took to the streets to celebrate the two-month anniversary of nationwide anti-government demonstrations. In Brazil, indigenous groups carried out protests across the country, and tensions increased between police militia groups in Rio de Janeiro. In Venezuela, the arrest of a prominent NGO director raises concerns over the criminalization of civil society activities by the government of Nicolás Maduro.

In celebration of International Pride Day on 28 June, protests in support of the LGBT community were reported in Argentina, Brazil, Colombia, Peru, and Venezuela. Demands revolved around the protection of LGBT rights and against widespread violence against LGBT people. According to human rights organizations, between 2014 and 2020, at least 3,514 LGBT people were killed in Latin America, with 1,401 of those directly killed due to their sexual orientation or gender identity (El País, 28 June 2021). High mortality levels can be partially explained by the presence of armed groups, criminal gangs, and persecution by law enforcement agents (El País, 28 June 2021). Additionally, the region’s conservative society and religious views are also often pointed to as reasons behind anti-LGBT violence in Latin America.

In Colombia, political violence continued at similar levels last week compared to the previous week, with clashes reported in the departments of Arauca, César, Antioquia, Córdoba, and Cauca. In Corinto municipality, Cauca department, members of the dissident Dagoberto Ramos Front of the Revolutionary Armed Forces of Colombia (FARC) engaged in heavy fighting against military forces. At least one dissident was killed and one civilian injured following a grenade explosion (El Universal, 1 July 2021). Additionally, civilians and members of vulnerable communities, such as farmers and former FARC members, continue to be targeted by rebel groups in the country (for more, see ACLED’s joint analysis piece: Understanding the killings of social leaders in Colombia during COVID-19). In San Vicente del Caguán municipality, Caquetá department, FARC dissidents from the Edison Cinco Mil Bloc of the Oriental Front shot to death five farmers. The area, located near the south of Meta department, has historically had a heavy presence of several FARC dissident fronts (TeleSur TV, 27 June 2021).

Meanwhile, on 28 June, demonstrators gathered in several cities across Colombia to celebrate two months since the start of anti-government demonstrations. Among several demands, the demonstrations have called for changes to the education, health, and security policies of the country. Demonstrators also call for the dismantling of the Mobile Anti-Disturbance Squadron Police Force (ESMAD), citing increased police brutality during recent demonstrations. Last week, police abuses were reported during violent demonstrations in the capital, Bogotá, where three ESMAD agents were fired after reportedly assaulting journalists. In Medellín city, ESMAD forces were also accused of sexually assaulting a teenage girl during a demonstration.

In Brazil, indigenous groups led a nationwide protest on 30 June, against the approval of a bill curtailing their land rights. Dozens of protests were reported across the country. This was the second consecutive week of demonstrations against the approval of Draft Bill 490 (Projeto de Lei 490, in Portuguese). The bill has been recently approved by a congressional commission, and will soon be voted in the Lower House and in the Senate. The bill aims to change the procedures to demarcate indigenous reserves, to allow contact with isolated indigenous groups, and to regulate economic exploitation of traditional land, which could favor agribusiness and mining activities (Mongabay, 24 June 2021).

Meanwhile, in the West Zone of Rio de Janeiro city, intense fighting was reported between rival militia groups in the Terreirão community, Recreio dos Bandeirantes neighborhood, last week. At least two suspects and one civilian were killed, with another five people injured (G1, 29 June 2021). The clash took place in the context of growing tensions between rival groups after the killing of the leader of the Bonde do Ecko. On 13 June, civil police officers killed Wellington da Silva Braga, known as Ecko, the leader of the group. The Bonde do Ecko militia, formerly known as the Justice League (Liga da Justiça, in Portuguese), is the oldest and largest militia group in Rio de Janeiro, with widespread control in the West Zone of the city and nearby areas. With the killing of Ecko, the group is left disorganized and without a clear leader. Several other police militia groups, including a splinter group from Ecko’s militia, are fighting for territorial control in a bid to expand their areas of influence.

Finally, in Venezuela, the director of the NGO FundaRedes, Javier Tarazona, and three other members of the organization were arrested last week by the Bolivarian National Intelligence Service (SEBIN) in Santa Ana de Coro, state of Falcón. They were arrested while Tarazona was at the Public Prosecutor’s office to make an official complaint against harassment by government officials. While one of detainees was released hours later, the other three activists, including Tarazona, were transferred to Caracas where they were indicted with the crime of instigating hatred, treason, and terrorism. In recent months, FundaRedes has been actively reporting on the conflict between Venezuelan armed forces and dissidents of the FARC in the Venezuelan-Colombian border, amid the lack of official data (La Opinion, 20 July 2021). Michele Bachelet, the UN High Commissioner for Human Rights, has officially expressed concern over these arrests (Reuters, 5 July 2021).