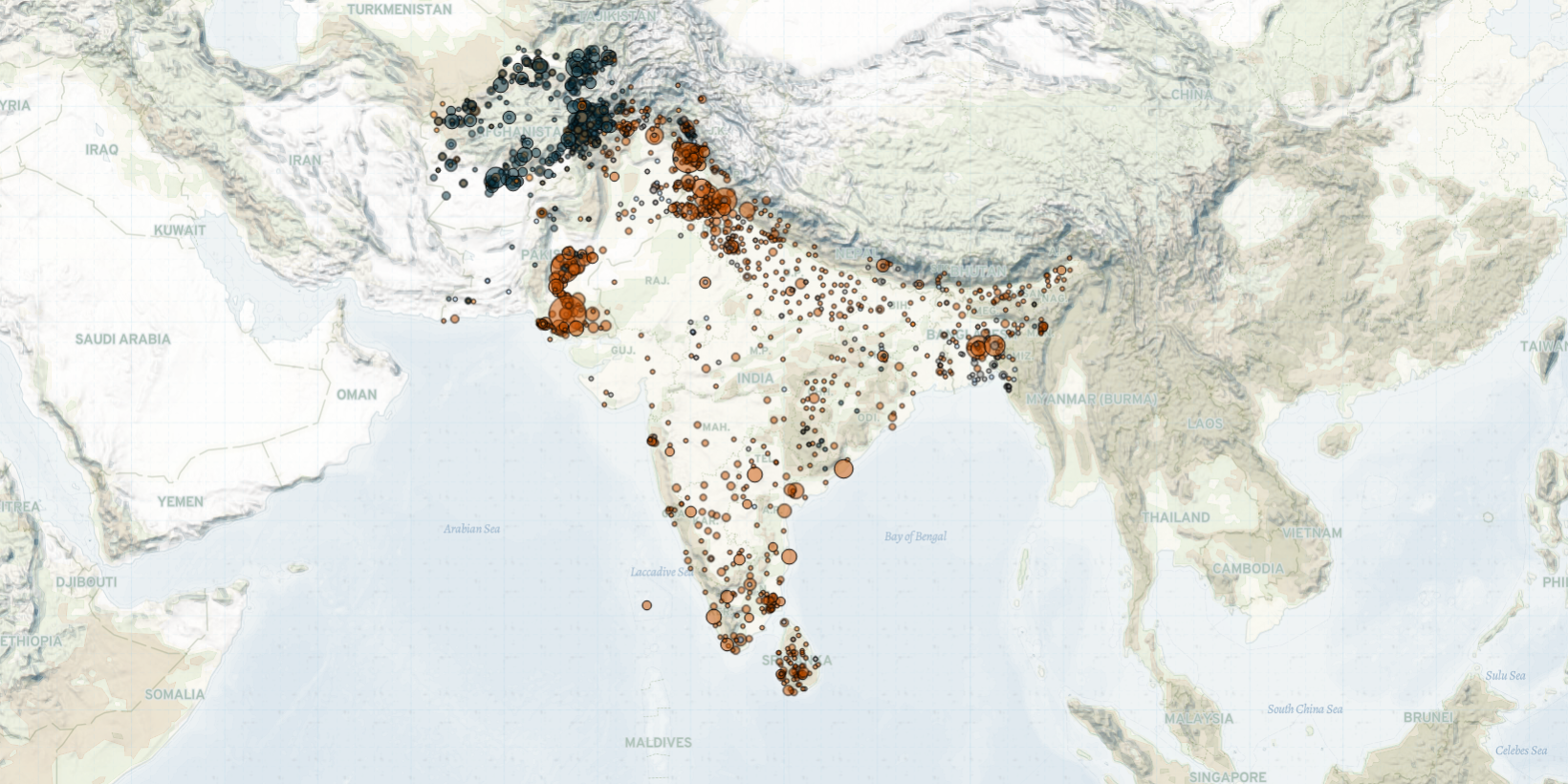 Last week in South Asia, the Taliban continued to overtake territory in Afghanistan, despite government forces launching counter-offensives, especially in the north, where they were supported by local pro-government militia forces. In Pakistan, Tehreek-i-Taliban (TTP) militants and Baloch separatists targeted security forces and civilians, expanding their attacks from the border and tribal areas to cities. In India, suspected militants launched a drone attack, the first of its kind, on a military infrastructure in Jammu and Kashmir (J&K) Union Territory. Lastly, Naxal-Maoist rebels exchanged fire with security forces in the Red Corridor in India.

In Afghanistan,1ACLED is currently conducting a review of sourcing and reporting of the conflict in Afghanistan from 2020. the Taliban continued to gain territory last week, seizing districts across the country and approaching urban areas, including the cities of Ghazni and Lashkargah. Meanwhile, Afghan forces managed to regain control over several districts in the country’s north, as well as Sherkhan Bandar port, one of the main crossings linking Afghanistan and Tajikistan in the northern Badakhshan province. The port had been seized by the Taliban the week prior. In the northern Takhar, Baghlan, and Balkh provinces, the Afghan army regained territories from the Taliban with the support of local and pro-government militias last week. Local uprising forces and anti-Taliban militia have long been active in the north, dating back to 1980, while their adherence to government authority has remained questionable (Afghanistan Analysts Network, 2 July 2021). Government forces have been increasingly supported by pro-government militias since early June.

At the same time, US troops pulled out from the Bagram Airfield last week, its largest airbase in the country, and completed their withdrawal by 90 percent (BBC, 6 June 2021). However, a number of troops may still remain in Kabul after full-withdrawal to ensure embassy protection and airport security, although this option is still being discussed (New York Times, 2 July 2021). The Taliban restated last week that the group stands against all foreign troop presence after the scheduled withdrawal deadline in September, but they would not target foreign missions, NGOs, nor civilians (BBC, 5 July 2021).

In Pakistan, militant groups were active in Khyber Pakhtunkhwa province last week, targeting both civilians and security forces. At least 10 civilians were killed, and eight others injured in a landmine blast in Godar town. A bomb also went off at a house in the Pakistan-Afghanistan border town of Landi Kotal, killing at least five civilians. It is suspected that TTP militants were behind both attacks as they have recently increased their presence in the province and have previously carried out remote attacks against civilians (The Diplomat, 5 June 2021). TTP militants also killed three paramilitary officers in a late-night attack on their checkpost in South Waziristan district. Meanwhile, militants from Afghanistan exchanged fire with Pakistani soldiers and killed two of them in North Waziristan region. The military forces of Pakistan have called on Afghanistan to better manage security on its side of the border amid the ongoing withdrawal of US troops from Afghanistan (Al Jazeera, 30 June 2021).

Elsewhere in Pakistan, Baloch separatists attacked Pakistani security forces and disrupted construction projects in Balochistan province. The Baloch Liberation Front (BLF) took responsibility for killing three paramilitary officers guarding fencing along the Pakistan-Iran border last week. Pakistan aims to completely fence off its border with Iran by the end of 2021, to impede the cross-border movement of Baloch separatists and hardline Sunni militants from Iran (Anadolu Agency, 20 February 2021). Another separatist group, the Baloch Liberation Army (BLA), conducted an IED explosion last week targeting paramilitary personnel near the airport in Quetta city, Balochistan. Six paramilitary personnel were injured in the explosion. It is the second such attack in recent weeks, with the BLF launching an attack in proximity to another airport in Turbat town on 17 June. Baloch separatists have increasingly focused on targeting public infrastructure to destabilize the province (Times of India, 2 July 2021). BLA also abducted six workers engaged in the construction of a cellular tower in Mastung district, and BLF targeted a military construction site in Kech district.

In India, suspected militants launched a drone attack against security forces in J&K last week, amid ongoing security operations against Islamist militants. Two bombs were dropped inside an Indian Air Force (IAF) station by drones in the Satwari area, injuring two officers. This is the first report of a drone attack by suspected militants in J&K. Indian security agencies suspect that Lashkar-e-Taiba (LeT) carried out the attack, linking the attack to their alleged use of drones to drop weapons, narcotics, and IEDs in India (The Hindu, 2 July 2021). Meanwhile, security forces killed five LeT militants, including a district commander, during an operation in Pulwama district. Two LeT militants and a soldier were killed in two additional operations in Srinagar and Pulwama districts.

Elsewhere, Indian security forces faced pressure from Naxal-Maoist rebels in the Red Corridor. In Chhattisgarh and Jharkhand states, a People’s Liberation Guerrilla Army (PLGA) commander and a Communist Party of India (Maoist) operative were killed during three separate encounters with security forces last week. Although Maoist attacks have decreased since late April, security officials fear that a Naxal-Maoist focus on youth recruitment in remote villages during the coronavirus lockdown could pose a greater threat in the future (Indian Express, 2 July 2021).