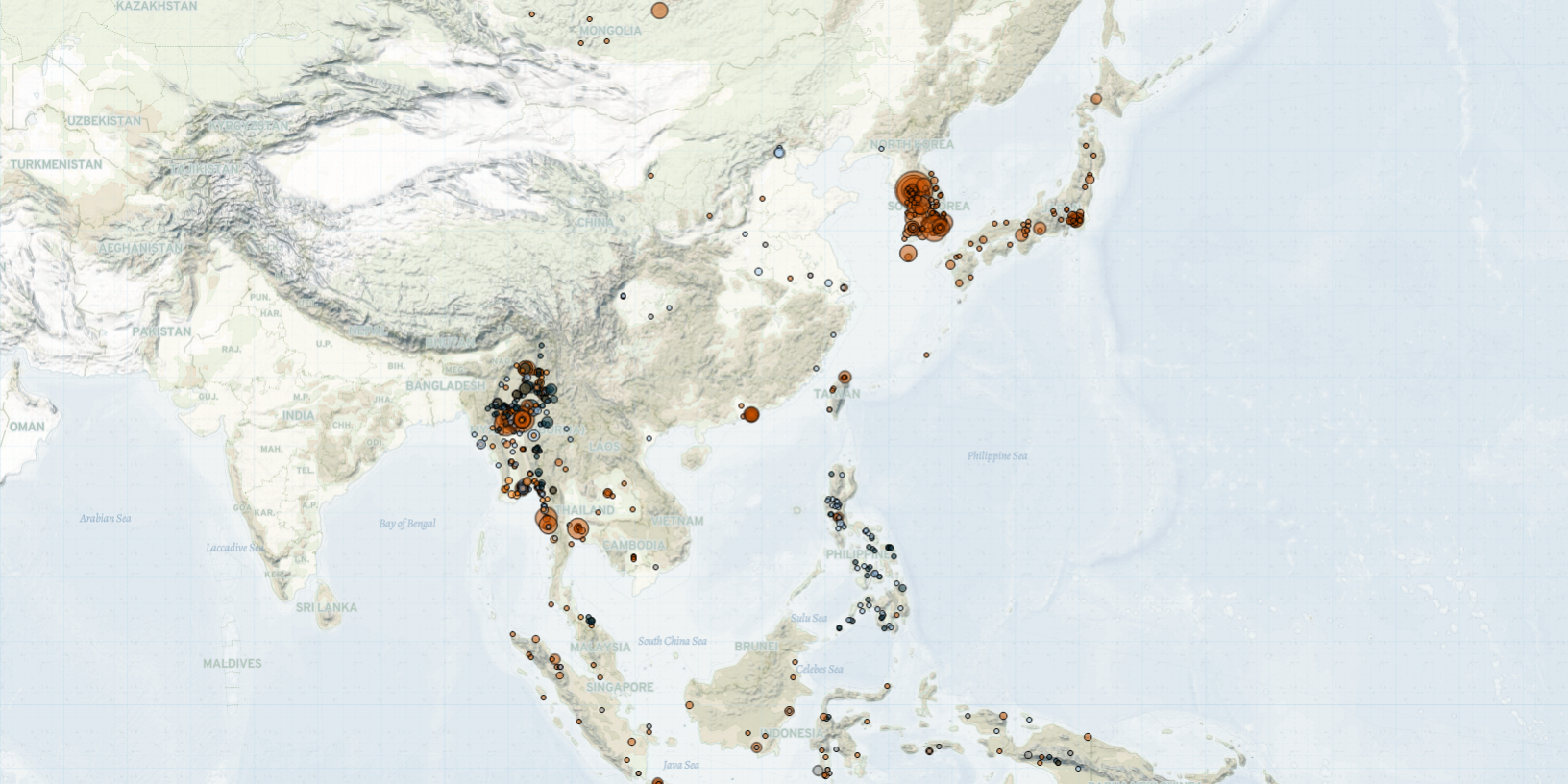 Last week in East and Southeast Asia, anti-coup demonstrations continued in Myanmar as a third wave of COVID-19 infections plunged the country further into a public health crisis. Meanwhile, clashes between the military and ethnic armed organizations (EAOs) continued, while a deadly military operation left at least 15 civilians dead in Kani township, Sagaing region. In the Philippines, there was an increase in violence due to the ongoing communist insurgency, while the government’s violent crackdown has been reported to target innocent people. In Indonesia, the government ratified a law, claiming to further Papua’s development, despite local discontent. Lastly, while in Indonesia, new anti-COVID-19 measures sparked a wave of demonstrations, in Thailand and South Korea, new COVID-19 restrictions led to a decrease in protests.

In Myanmar, the COVID-19 crisis worsens as infection rates surged to record daily numbers (Reuters, 14 July 2021). The regime has imposed stay-at-home orders in 74 out of 330 townships across Myanmar as of last week as the country struggles to cope, amid limited testing capacity and high test positivity rates (WHO, 16 July 2021; UN, 19 July 2021). Despite the ongoing public health crisis, anti-coup supporters continue to demonstrate against the military regime across the country. In Yangon region, however, the number of protest events decreased last week, amid the highest COVID-19 infection rates in Myanmar (RFA, 14 July 2021).

In Kani township, Sagaing region, military troops launched raids on several villages beginning on 8 July. Villagers fled to nearby forests following the raids, where at least 26 villagers were detained by the military (Burma News International, 15 July 2021). After military troops left the area, villagers found at least 15 bodies that exhibited signs of torture scattered in the nearby forests (RFA, 13 July 2021). The incident marks the latest military crackdown in Kani township, which has emerged as a stronghold of armed anti-military resistance. Prior to this, on 19 June, the military raided Kin village after their troops were ambushed by unknown assailants with landmines and traditional firearms earlier that day. Nine villagers were reportedly tortured during the crackdown (Myanmar Now, 13 July 2021).

Last week in the Philippines, there was a considerable increase in violence related to the communist insurgency, notably in Eastern Samar and Northern Samar in the Eastern Visayas region. Fighting between the military and suspected New People’s Army (NPA) militants led to the evacuation of over 500 families from Barangays Hitapi-an and San Jose in Catubig, Northern Samar (Philippine Star, 14 July 2021). Meanwhile, state forces continue to be criticized by human rights activists for the illegitimate use of violence. The state continues to accuse civilians of being rebels or rebel sympathizers, leading to arrests on spurious grounds or even death (Davao Today, 16 July 2021). Notably, last week, a military operation in Surigao del Norte led to the death of two farmers accused of being communist NPA militants (Davao Today, 16 July 2021).

In Indonesia, the government ratified a revised version of the pre-existing 2001 Papua Special Autonomy Law, despite local Papuan opposition (Kompas, 15 July 2021). In response to the ratification, Papuan students held protests in Jakarta, West Papua and in Papua, with dozens  arrested by police (Human Rights Papua, 14 July 2021). The government claims that the new law will boost development in Papua and West Papua’s poorest regions and will increase the participation of indigenous people in local politics (Reuters, 15 July 2021). However, local Papuans activists have actively campaigned against the law, arguing that it will increase central government control over the region and its resources (Reuters, 15 July 2021). There is a long-running independence movement in the provinces of Papua and West Papua challenging Indonesian rule and calling for a referendum on independence (Tribunnews, 15 July 2021).

Also in Indonesia, nearly half of all events recorded last week were in response to fresh COVID-19 restrictions, which include a ban on large events and limits for business operations (The Jakarta Post, 17 July 2021). The majority of demonstrations were held in Java, led by market sellers. In Pasuruan, the demonstrators turned violent, causing damage to a police post and leading to hundreds of arrests (Detik, 15 July 2021). Meanwhile, rioters damaged police vehicles and a village administration building when authorities tried to enforce the restrictions in Surabaya and Lumajang, respectively (Kompas, 12 July 2021; Kompas, 15 July 2021). Despite the opposition, the government also announced an extension of the measures, which now include a further 15 regions outside the islands of Java and Bali, until the end of July (The Jakarta Post, 17 July 2021).