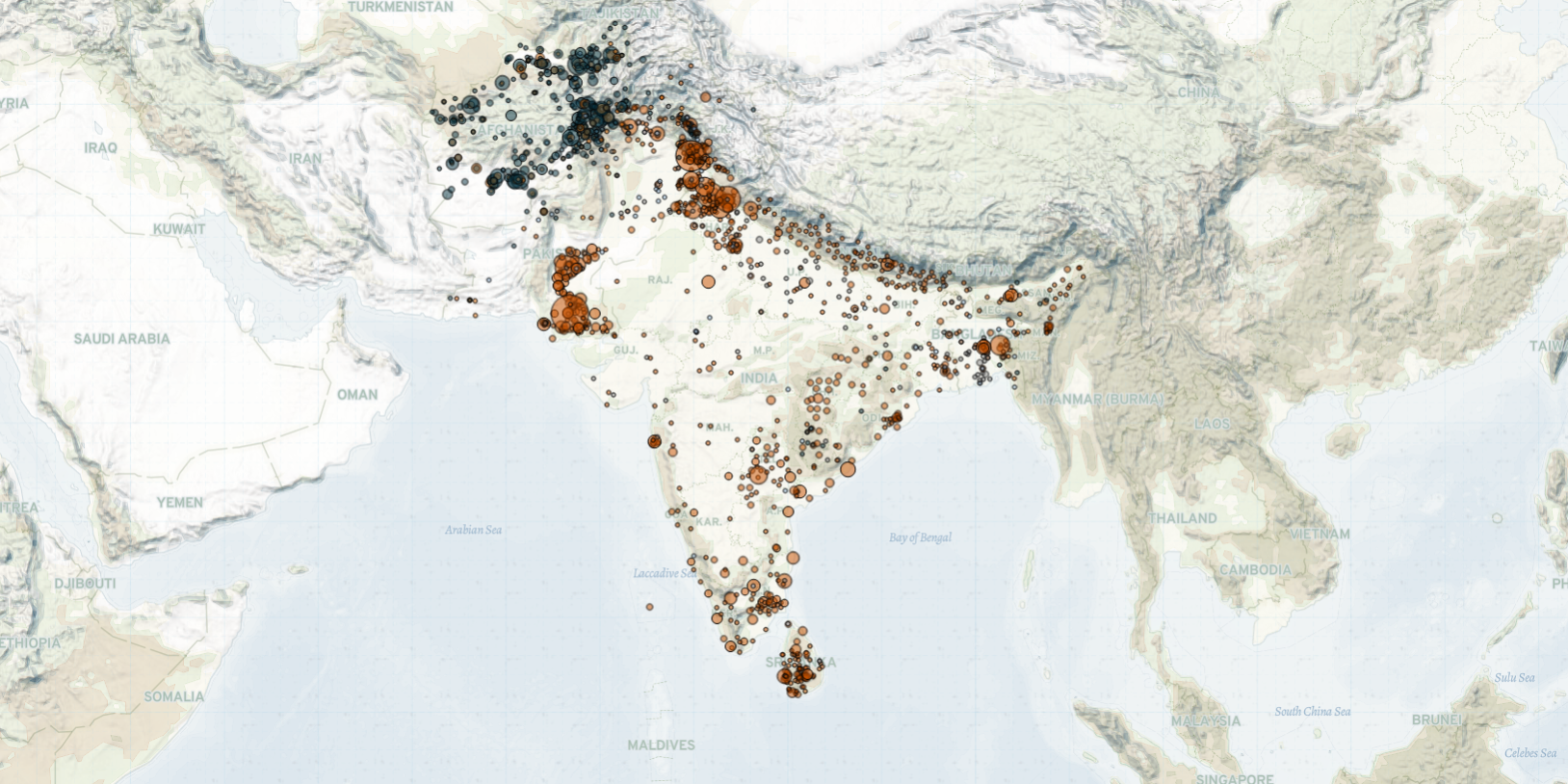 Last week in South Asia, the Taliban continued to make territorial gains in Afghanistan. In Pakistan, Chinese laborers were killed in a bus explosion. Meanwhile, the daughter of Afghanistan’s ambassador to Pakistan was reportedly kidnapped in Islamabad city, exacerbating ongoing tension between Pakistan and Afghanistan. In India, reports of recent clashes between Indian and Chinese forces surfaced but were rejected by the Indian Army. Lastly, Indian security forces continued operations against militants in Jammu and Kashmir (J&K) Union Territory.

In Afghanistan,1ACLED is currently conducting a review of sourcing and reporting of the conflict in Afghanistan from 2020. the Taliban captured 15 districts across nine provinces last week, while Afghan state forces, supported by pro-government militias, regained control over four districts in three provinces. The Taliban continued efforts to capture strategic districts surrounding cities and intensified their attacks on at least 10 cities across the country last week (TOLO News, 11 July 2021; TOLO News, 12 July 2021). Notably, they captured Pur Chaman district of Farah province, bringing all the districts of Farah province under their control, except for the provincial capital, Farah city. In Kandahar province, the Taliban also captured Arghandab district, which borders Kandahar city, as well as Spin Boldak district, including a key border crossing with Pakistan (BBC, 15 July 2021). The recent capture of major border crossings with Tajikistan, Iran, Turkmenistan, and now Pakistan provides the Taliban forces a key source of revenue through tax collection (Wall Street Journal, 5 July 2021; Washington Post, 16 July 2021). During the clashes in Spin Boldak district, a Pulitzer Prize-winning photojournalist associated with Reuters was killed (Reuters, 16 July 2021). It remains unclear whether he was directly targeted by the Taliban or inadvertently killed during an attack on the Afghan commandos he was accompanying.

In Pakistan, a bus carrying Chinese hydropower developers exploded in Khyber Pakhtunkhwa province last week. At least nine Chinese engineers and three Pakistani soldiers were killed in the explosion. The team was working on the construction of the Dasu hydropower project, which is part of the China-Pakistan Economic Corridor (CPEC). CPEC is an investment plan for building roads and pipelines between the two countries (BBC News, 14 July 2021). While the Pakistani Foreign Ministry issued a statement claiming that the incident was the result of a vehicle issue, China has initiated a probe into suspicions that militants may have carried out the bomb attack (Dawn, 19 July 2021; Deutsche Welle, 14 July 2021). The security of Chinese personnel has long been a concern in Pakistan. Several militant groups, including Baloch separatists, actively oppose Chinese infrastructure development and investment projects, claiming they exploit local labor and natural resources (Deutsche Welle, 14 July 2021).

Elsewhere in Pakistan, the daughter of the Afghan Ambassador to Pakistan was kidnapped in Islamabad city. She was released after several hours, having suffered injuries. The Afghan Foreign Ministry recalled the ambassador and other senior diplomats from Pakistan “until all the security threats are removed” (BBC News, 19 July 2021). The relationship between the two countries has been strained amid rising Taliban violence in Afghanistan, coinciding with the withdrawal of US and NATO forces. The Afghan government has accused Pakistan of harboring Taliban leaders, while Pakistan accuses Afghanistan of allowing armed groups to use its territory to initiate attacks in Pakistan (Al Jazeera, 18 July 2021).

In India, the Indian Army denied reports last week of a recent clash with the Chinese People’s Liberation Army (PLA) in the eastern Ladakh region (Deccan Herald, 14 July 2021). According to a report by an Indian defense correspondent, the clash took place near the Galwan River and no casualties were reported (Business Standard, 14 July 2021). The report also draws attention to a defense source observing “a gradual build-up of Chinese troops and equipment on their side of the Line of Actual Control (LAC)” (The Diplomat, 16 July 2021; Business Standard, 14 July 2021). The LAC is a border alignment, which has never been agreed upon by both parties, that separates Indian-controlled territory from Chinese-controlled territory (The Hindu, 13 June 2020). India and China have been locked in a military standoff in eastern Ladakh since May 2020 (for more on the military conflict between the two countries, see this ACLED special report). After several rounds of diplomatic talks, the two sides withdrew troops from both the north and south banks of Pangong lake in February and are currently discussing how to complete the disengagement process (Deccan Herald, 14 July 2021).