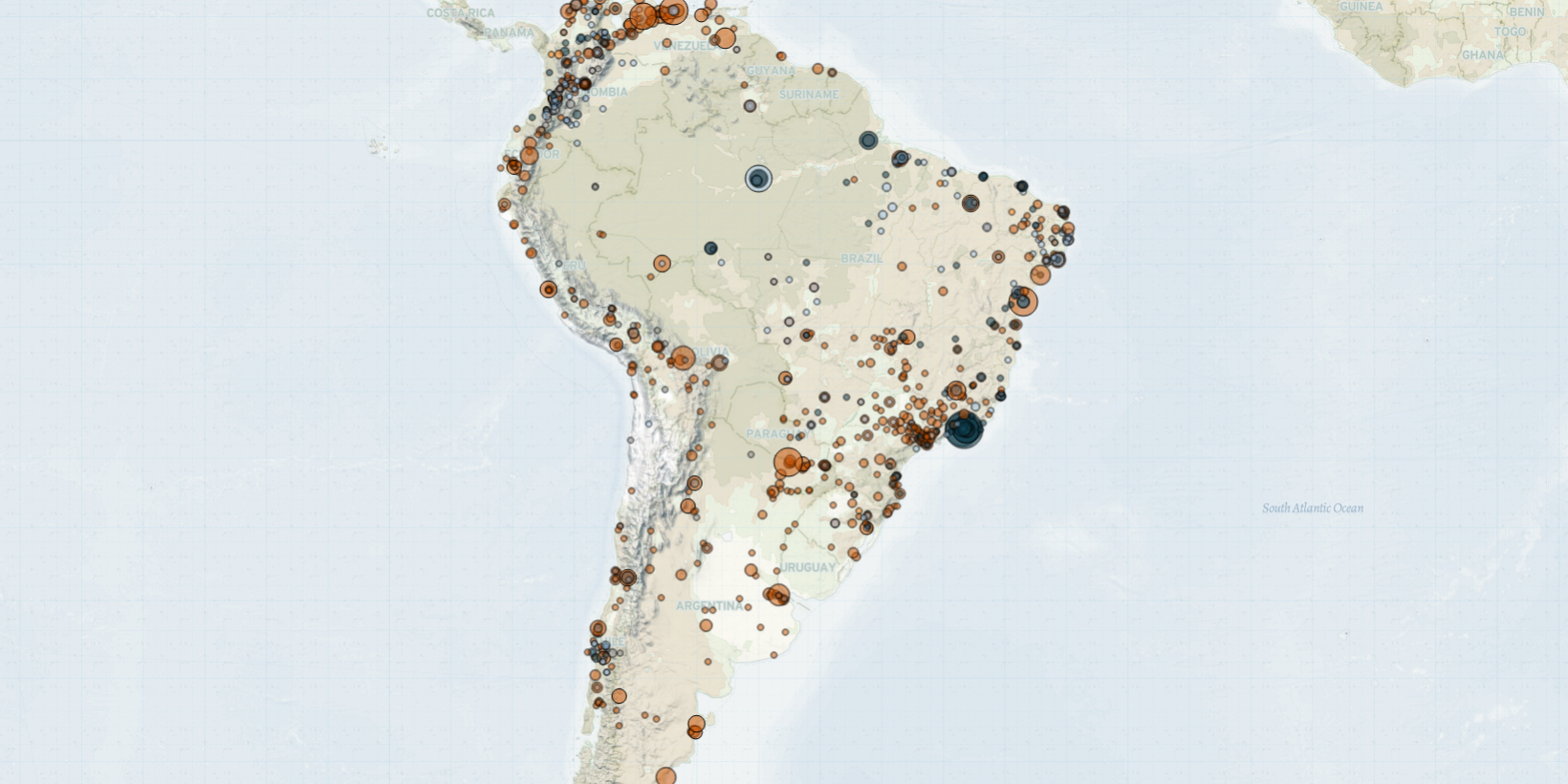 Last week in South America, anti-government demonstrations took place in Brazil and Colombia. In Ecuador, teachers carried out a nationwide protest in support of an education law reform. In Colombia, intense fighting between armed groups continued in the Antioquia department, while in Chile, indigenous militias exchanged fire with state forces. In Brazil, tensions increased along the Brazil-Paraguay border following several attacks perpetrated by a vigilante armed group. In Paraguay, three military soldiers were killed following the activation of a landmine placed by an insurgent group.

Anti-government demonstrations took place in Colombia and Brazil last week. In Colombia, citizens took to the streets on 28 July, marking the three-month anniversary of the first nationwide demonstrations against the government of President Iván Duque. Several groups — including students, labor unions, and indigenous communities — continue to demand reforms in the areas of education, health, and security, among others. Meanwhile, in Brazil, thousands of people demonstrated across the country on 24 July, to demand the resignation of President Jair Bolsonaro (G1, 24 July 2021). Demonstrators criticized the president’s mishandling of the pandemic, including his frequent dismissal of the severity of the disease and opposition to social distancing measures and vaccinations. The demonstrations come as Bolsonaro’s popularity continues to fall, with several governmental officials currently being investigated for involvement in a corruption scheme for the purchase of overpriced vaccines (Folha de São Paulo, 1 August 2021; The Guardian, 24 July 2021).

Meanwhile, in the city of São Paulo, a small group of people set fire to the statue of an 18th century expeditionary leader, who is accused of having exploited and enslaved Indigenous and Black people (G1, 25 July 2021). The targeting of the statue happens amid a debate about the underrepresentation of Black and Indigenous people in monuments celebrating Brazilian history (El País, 24 July 2021; Agência Brazil, 13 December 2020).

In Ecuador, teachers carried out demonstrations across the country in support of a pending bill to reform the existing Law of Intercultural Education (LOEI). The bill was approved by the National Assembly in March, but its implementation has been suspended pending the outcome of two Constitutional Court challenges to its constitutionality (TeleSurTV, 1 August 2021).The reform bill includes a salary increase for teachers, and the payment of retirement pensions, among other things. More than 30 teachers started a hunger strike and set up a camp on 12 July in support of the bill, and by last week around 50 other teachers had joined the hunger strike across multiple cities (TeleSurTV, 1 August 2021).

Political violence increased in Colombia last week compared to the week prior, driven by ongoing fighting between rival armed groups. In the rural area of Ituango municipality, Antioquia department, clashes were reported for the second consecutive week between members of the Gulf Clan and the 18th Dissident Front of the Revolutionary Armed Forces of Colombia (FARC). The rival groups have been disputing control of this territory for months, due to its strategic position connecting the north of Antioquia, Bajo Cauca, the south of Córdoba, and the Urabá region. These are key routes towards the Pacific and Atlantic coasts, used for the transportation of drugs (El Tiempo, 2 August 2021). Nearly 4,000 farmers have fled the area and sheltered in the urban limits of Ituango city in the past two weeks, spurred primarily by the constant fighting (El Pais, 29 July 2021).

In Chile, fighting between state forces and suspected indigenous militias were reported in the Araucanía and Biobío regions. In the Tirua area, Biobío, armed men ambushed a police unit, and two police officers were injured. In the Carauhe area, Araucanía, militiamen exchanged fire with police officers carrying out a protective order outside the building of a logging company. Two police officers and a worker were injured, before the suspects managed to escape. On 10 July, the son of a Mapuche leader was shot dead by police forces during an armed clash in the same area. Local media outlets claim the clashes could jeopardize attempts to improve relations between the government and indigenous groups (Al Jazeera, 10 July 2021).

In Brazil, at least three people were killed last week by members of the Vigilantes of the Border (Justiceiros da Fronteira, in Portuguese), between the cities of Pedro Juan Caballero, in Paraguay, and Ponta Porã, in Brazil. The armed group is suspected to be responsible for dozens of killings along the Brazilian-Paraguayan border in recent years (Campo Grande News, 28 July 2021). They target suspected thieves and robbers, and their modus operandi includes cutting off the hands of their victims (Midiamax, 29 July 2021). There is a significant presence of organized criminal groups in the Brazilian-Paraguay border, as the region is a key route for drugs and firearms trafficking in South America.

Likewise, near Tacuatí municipality, in Paraguay, three military soldiers from the Internal Defense Operations Command (CODI) were killed after their vehicle activated an explosive device placed by the Paraguayan People’s Army (EPP). Following the explosion, the EPP detonated another device, and engaged in a one-hour clash with military soldiers in a second vehicle, before fleeing the scene (ABC, 30 July 2021). The EPP, the main insurgent group active in Paraguay, is a small left-oriented armed organization that aims to revendicate expropriated land belonging to businessmen (BBC, 17 September 2020). The group mainly conducts sporadic attacks on farms along the border with Brazil, but has also been involved in extortion and the kidnapping of political figures in recent years.