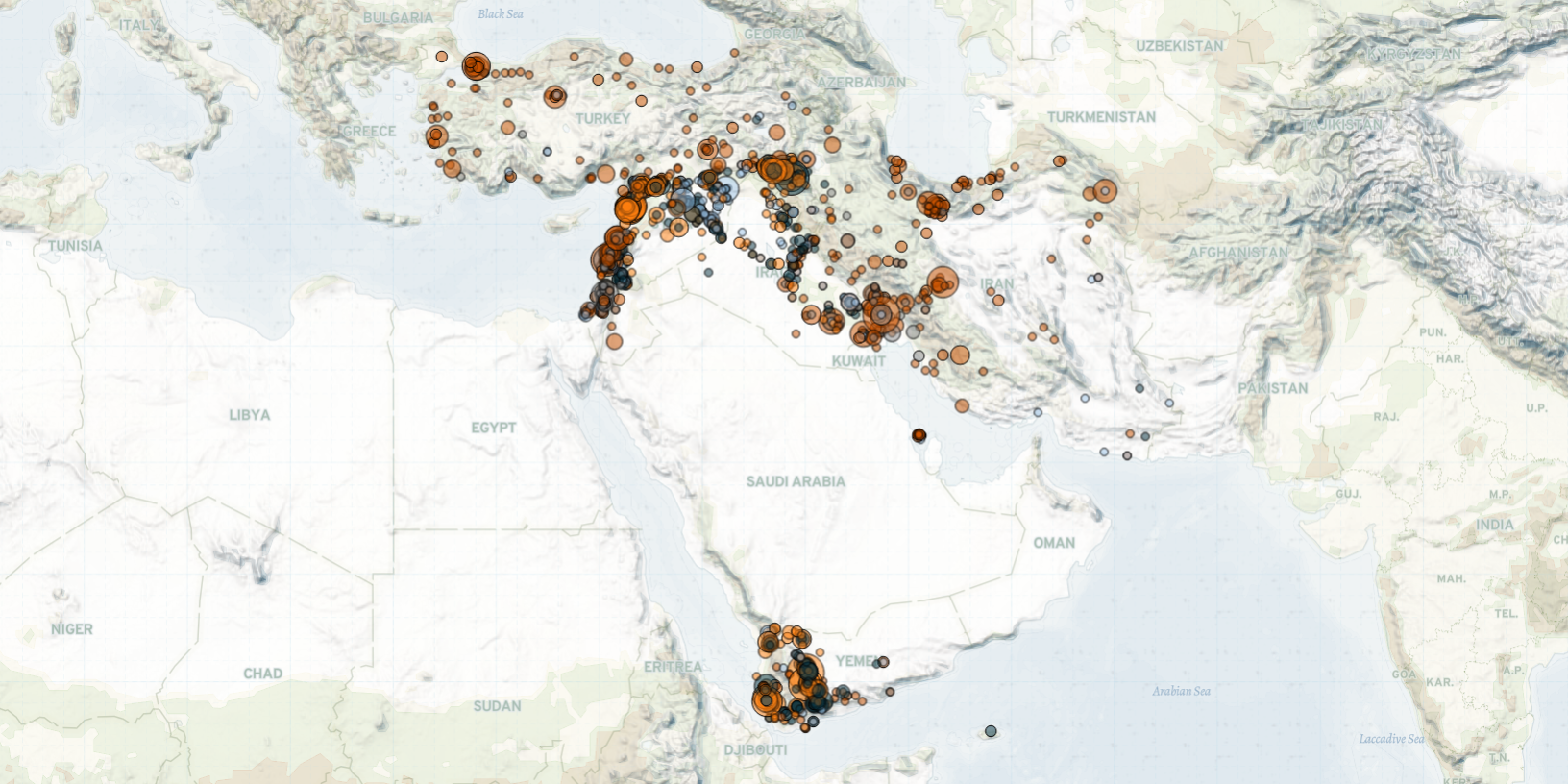 Last week in the Middle East, political violence decreased in Al Bayda governorate in Yemen as it increased significantly in Marib governorate. Along the Saudi border, Houthi forces launched new attacks on Saudi and Sudanese forces, and resumed their drone and missile attacks on Saudi Arabia after a three-week hiatus. In Syria, two Turkish soldiers were killed in a Peoples’ Protection Units (YPG) attack in Aleppo. Meanwhile, regime forces launched a military operation in Dar’a city in an attempt to consolidate control over the area. In Iraq, the Islamic State (IS) attacked a condolence gathering in Salah Al Din, resulting in civilian fatalities. An armed attack against the Kurdish community left seven family members dead in Turkey, sparking pro-Kurdish protests headed by the pro-Kurdish Peoples’ Democratic Party (HDP). In Lebanon, a new Prime Minister-designate was assigned amid continuous protests over deteriorating living and economic conditions. In Palestine, three Palestinians were killed by Israeli military forces, and at least one by the Hamas Movement. Meanwhile, Israel carried out airstrikes against the Hamas Movement in the Gaza Strip.

In Marib governorate, political violence increased significantly last week, reaching levels observed at the height of the Houthi offensive in March 2021. Clashes notably resumed in Raghwan and Sirwah districts to the west of Marib city, having been concentrated in the south of the governorate for the previous two weeks. Since the launch of the pro-Hadi offensive in Al Bayda governorate in early July to alleviate pressure on Marib, levels of political violence in the two governorates have been closely linked. Decreasing levels of violence in one have been associated with increases in the other.

In Saudi Arabia, Houthi drone and missile attacks resumed last week after an unexplained hiatus of three consecutive weeks — something that had not been recorded since July 2020. On 30 July, Saudi forces claimed to have thwarted an attack on a Saudi commercial ship at an unreported location. Houthi forces also launched attacks on Saudi and Sudanese forces in the border area near Jizan governorate.

In Syria, Turkish forces and opposition rebels continued to clash with the YPG along frontlines in Al Bab, Menbij, and Azaz districts, in the Aleppo countryside last week. In the Hazwan area of Al Bab, the YPG targeted a Turkish military vehicle with an anti-tank guided missile on 24 July, killing at least two soldiers and wounding several others (Reuters, 25 July 2021). Then on 25 July, the YPG shelled Afrin city in Aleppo, wounding eight civilians. A Syrian Civil Defence center was also impacted and sustained structural damage as a result. In response, Turkey escalated its shelling campaign on YPG-controlled areas in the governorate. In Ain Al Arab (Kobani) district, a Turkish drone targeted two civilian vehicles on 30 July, though no casualties were reported.

In Dar’a, the Syrian regime’s fourth Armored Division launched military operations in Dar’a Al Balad against former opposition rebels local to the governorate last week. Regime forces also carried out shelling on several neighborhoods. The operations come after weeks of negotiations and an initial agreement between the regime and the Dar’a Central Committee regarding the presence of wanted armed individuals in Dar’a Al Balad, the majority of whom are former rebels (Al Jazeera, 29 July 2021). The agreement was intended to prevent a regime-led offensive in the area. Several fatalities were reported during four days of clashes, which have since spread to other areas in the governorate.

In Iraq, IS launched an attack against a condolence gathering on 30 July in the Al Bu Jaili area of Nahiyat Yathrib district, Salah Al Din governorate. The attack resulted in at least 13 fatalities, including three security force personnel as well as civilians and/or local armed militiamen who fought back during the attack (Baghdad Today, 30 July 2021).

In Turkey, an unidentified group shot seven members of a Kurdish family dead and set their house on fire in Konya city last week. The family had previously been the target of ethnically-motivated threats and an attack (Middle East Eye, 31 July 2021). While Turkish officials blame a long-standing family feud for the attack, members of the Kurdish community and the family’s lawyer labelled it an ethnically-motivated attack (Al Jazeera, 31 July 2021). Following the attack, the HDP co-leader blamed hate speech and the state’s crackdown on HDP executives and Kurdish people for the recent rise in violence against Kurdish people (Al Jazeera, 31 July 2021). Protests condemning the attack were staged in Diyarbakir, Istanbul, and Sirnak last week.

Last week in Lebanon, former Prime Minister Najib Mikati was tasked with the formation of a new government, less than two weeks after Saad Hariri stepped down from his position as Prime Minister-designate. Hariri stepped down after failing to reach an agreement with President Michel Aoun on the formation of a government (Reuters, 2 August 2021). As the economic crisis in Lebanon worsens, demonstrations against dire economic and living conditions continued across the country last week. Recurring power outages and the shortage of fuel also exacerbated demonstration activity. In Beddawi, demonstrators clashed with police forces as they attempted to storm the municipality building. During a demonstration in the Palestinian refugee camp of Ein el Hilweh, unidentified armed men opened fire at demonstrators, wounding a person. Similarly, unidentified assailants fired on demonstrators in Habbouch, though without any reports of injuries.

In Palestine, Hamas security forces opened fire at a car that sped through a checkpoint in the Al Tuffah neighborhood of Gaza city last week, killing a passenger. Hamas also beat a refugee in the An Nusayrat camp. The refugee complained of chest pains after the attack and died (Times of Israel, 27 July 2021), though the exact cause of death remains unclear.

Lastly, Israeli warplanes targeted several Hamas Movement positions in the Gaza Strip in retaliation for incendiary balloons launched by unidentified Palestinian militants into Israel. No casualties were reported during the airstrikes (Haaretz, 25 July 2021).