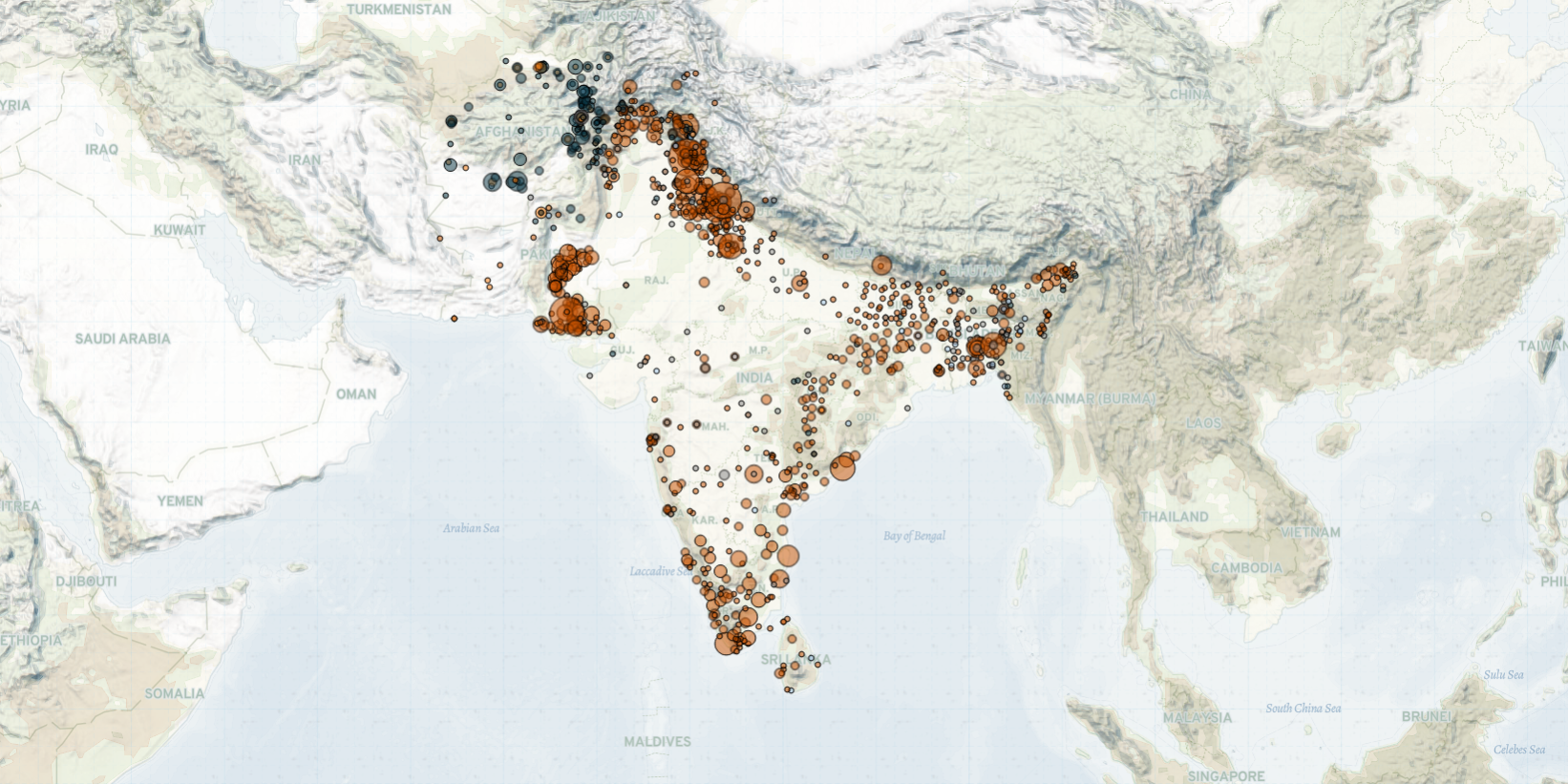 Last month in South Asia, the Taliban took control of Kabul and emerged as the new de facto government of Afghanistan. Meanwhile, violence persisted in the country during the evacuation of international staff and Afghan nationals, while both civilian and armed resistance also formed against the group. In Pakistan, unidentified militants from Afghanistan and the Tehreek-e-Taliban Pakistan (TTP) targeted security forces. In Balochistan province, Baloch separatists attacked security forces and civilians engaged in development projects. Two explosions left multiple civilians dead and injured in Karachi city and Punjab province, coinciding with Pakistan Independence Day and a Shiite Muslim holiday, respectively. The two-year anniversary of the revocation of Jammu and Kashmir’s (J&K) semi-autonomy was met with peaceful protests in Pakistan and relative calm in India. Lastly, Islamist militants attacked Indian security forces in J&K.

In Afghanistan, the Taliban’s rapid territorial advances continued throughout the first half of August, as they captured significant provincial capitals, including Lashkargah, Kandahar, and Mazar-i Sharif. On 15 August, Taliban forces entered Kabul city, seizing the state’s administrative and security headquarters. The group surrounded the city from the early hours of the day and negotiated with Afghan officials for the transfer of power (New York Times, 15 August 2021). President Ashraf Ghani and some high-ranking officials left the country before the group entered Kabul and without holding any meetings with the Taliban (CNBC, 18 August 2021).

The Taliban’s abrupt capture of Kabul resulted in a mass exodus of Afghan and foreign nationals fleeing the country. Chaotic evacuation scenes continued for days in Kabul’s Hamid Karzai International Airport (Reuters, 18 August 2021). At least 12 civilians died during the evacuations due to stampedes, and one incident of gunfire occurred between US forces and an unidentified group. On 26 August, the Islamic State (IS) conducted a suicide attack outside one of the airport gates, killing over 180 people, including US soldiers. The US conducted airstrikes during the following days, targeting IS militants in Kabul. Ten civilian fatalities were reported during those airstrikes (CNN, 31 August 2021). At the same time, the Taliban remained insistent on the complete withdrawal of foreign forces. On 31 August, 20 years after its troops first arrived in Afghanistan, the US completed its final withdrawal (The Guardian, 31 August 2021). At least 200 US citizens and hundreds of US visa holders, including permanent residents, have yet to be evacuated (AP News, 4 September 2021).

Following the overthrow of the Afghan government, demonstrations against Taliban rule were reported in prominent cities, including in Kabul, Jalalabad, Herat, and Asadabad. The first wave of protests took place during the commemorations of Afghanistan’s independence from British rule, celebrated on 19 August. Demonstrators raised the national flag of Afghanistan in defiance of the Taliban’s white flag. The Taliban fired into the air and on the crowds to disperse the gatherings, killing three Afghans in Jalalabad. Women, journalists, and civil society activists also staged protests, mainly in Kabul, demanding respect for women’s rights to work and education, rejecting Taliban intervention in independent media outlets, and asking for an inclusive government.

Meanwhile, an anti-Taliban resistance, known as National Resistance Front (NRF), began to form in the Panjshir valley in northeastern Afghanistan following the Kabul takeover. The valley had previously hosted Northern Alliance Forces, a military alliance against the Soviet and then Taliban invasion, in the 1980s and 1990s (BBC News, 3 September 2021). Led by the son of a late Northern Alliance leader, the group consists of local militia and former members of Afghan security forces. It is also supported by former Vice President Amrullah Saleh and former Acting Defense Minister Bismillah Mohammadi (Washington Post, 18 August 2021). From 18 August to 3 September, ACLED records over 20 clashes between the NRF and Taliban forces around Panjshir valley and in the neighboring Baghlan and Parwan provinces. Since then, the Taliban claim to have entered the Panjshir valley, although it remains uncertain whether they have taken complete control over all remaining NRF territory (CNBC, 7 September 2021).

Parallel to the developments in Afghanistan, unidentified militants attacked Pakistani military across the border from Afghanistan in Pakistan’s Bajaur district in two separate incidents, killing four soldiers. Bajaur is a tribal region along the Afghan border in which militant groups, including the TTP, have long sheltered. Since the fall of Kabul, the TTP has renewed its allegiance with the Afghan Taliban and has stepped up activity against the Pakistani army (Reuters, 29 August 2021). In the past five weeks, the TTP launched multiple remote attacks and fired at military checkposts and convoys across Khyber Pakhtunkhwa province, killing at least 13 Pakistani security officers.

In another development, at least 13 members of a family were killed in a grenade attack as they returned from a wedding on the outskirts of Karachi city on 14 August. It remains unclear who carried out the attack, which coincided with Pakistan Independence Day celebrations, with initial investigations by counterterrorism police suggesting that unidentified motorcyclists ambushed the truck transporting the family (DW, 15 August 2021). Meanwhile, militants opened fire at a security vehicle during Independence Day festivities in Loralai district in southwestern Baluchistan province, resulting in the deaths of three militants and a soldier in the ensuing clash. Although no one has yet claimed responsibility for the attack, Baloch separatists have conducted such attacks in recent years (AP News, 15 August 2021).

Separatist violence remained high in Balochistan province over the past five weeks, as Baloch nationalist militants routinely attacked security forces and laborers. In Gwadar district, a Baloch Liberation Army (BLA) suicide bomber targeted a vehicle carrying Chinese engineers, killing two children playing nearby and injuring three passengers. The port city of Gwadar has a strategic importance owing to Chinese investment, which Baloch separatists oppose as exploitative of the resource-rich province (The Print, 21 August 2021). Suspected Baloch militants also carried out fatal attacks on civilian targets in the Marwar area and in Quetta city. In another incident in Quetta city, the BLA targeted a police van with explosives, killing two policemen and injuring over 20 police officers and civilians. Pakistan’s Counter Terrorism Department (CTD) retaliated by killing five BLA militants during an operation in Quetta later that day.

Meanwhile, a CTD team killed at least 11 IS militants during an intelligence-based operation in Mastung district in Balochistan. The operation was conducted about 60 km away from the provincial capital, Quetta, where IS has claimed several attacks in recent years.

Elsewhere in Pakistan, an explosion by an unidentified group targeting a Shiite Muslim procession commemorating the holy day of Ashura on 19 August left at least three dead and 50 injured in Bahawalnagar district in Punjab province. Shiite Muslims, who make up roughly 20% of Pakistan’s population, have previously been the target of Sunni hardline groups, who have bombed shrines and disrupted Ashura processions (Al Jazeera, 19 August 2021). Ten days prior to the procession, unidentified assailants hurled a grenade at a Shiite mosque in Bahawalnagar city. Shortly after the Ashura attack, Shiite groups staged a demonstration demanding the implementation of strict security measures during the holy month of Muharram.

The second anniversary of the revocation of Article 370 and the bifurcation of J&K into two union territories on 5 August was commemorated with close to 100 peaceful protest events in Pakistan and a few demonstration events in India. While the ruling Bharatiya Janata Party (BJP) celebrated the anniversary by holding rallies in India, an alliance of Kashmiri parties organized sporadic demonstrations in J&K. Shops and businesses, except for essential services, were shut down in Srinagar city to observe a “Black Day” (Hindustan Times, 6 August 2021). Although the shutdown strike was peaceful, traders accused police of forcing them to keep their businesses open and breaking shop locks (Hindustan Times, 6 August 2021). In all provinces of Pakistan, civil society activists and lawmakers staged demonstrations to denounce the revocation of J&K’s special status and to show solidarity with Kashmiris.

Lastly, in J&K, Islamist militants consistently launched attacks against security forces throughout August. Lashkar-e-Taiba (LeT), Jaish-e-Mohammad (JeM), and other unidentified militants targeted police forces in attacks along the Line of Control (LoC) and in public places in cities. According to Indian intelligence agencies, at least six groups of militants have established presence in the Kashmir Valley since US troops began their withdrawal from Afghanistan (NDTV, 30 August 2021). Intelligence agency sources have also warned that the Taliban’s takeover of Afghanistan may provide a boost for Islamist militants in J&K, claiming that JeM representatives met Taliban leaders in Kandahar (Hindustan Times, 28 August 2021).