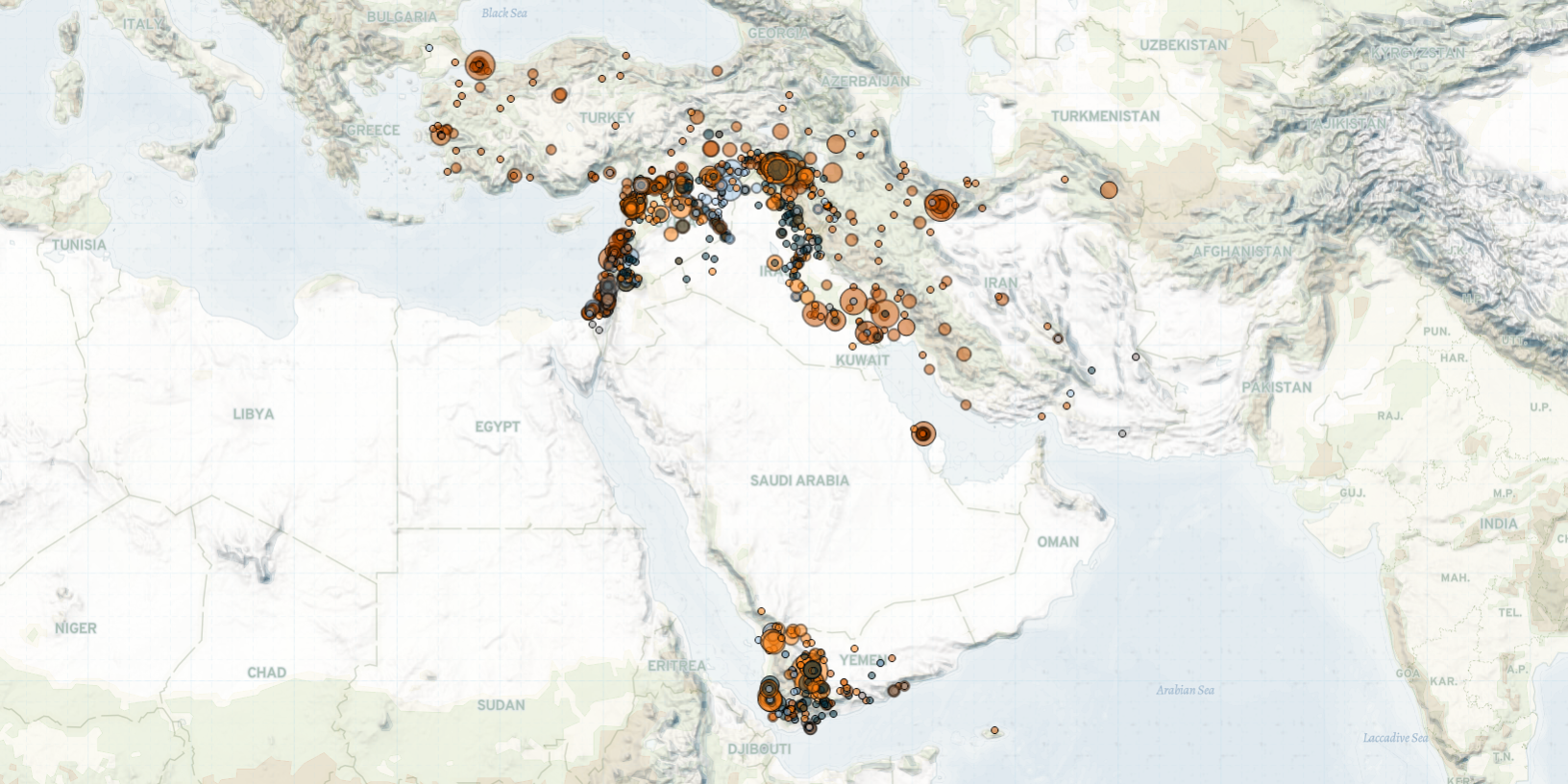 Last week in the Middle East, widespread demonstrations in southern Yemen led to the declaration of a state of emergency by the Southern Transitional Council (STC), while Houthi forces made territorial gains in both Al Bayda and Shabwah governorates. In Saudi Arabia, state forces reportedly tortured a Yemeni man to death on suspicions of links with the Houthis. In Syria, an Islamist armed group targeted a Turkish armored vehicle with an IED in Idleb countryside, killing three soldiers. In Deir-ez-Zor province, an unidentified drone launched deadly airstrikes targeting Iraqi Popular Mobilization Forces (PMF) positions. Meanwhile, Russian and Syrian regime forces entered Yadudeh town in Dar’a as part of another agreement with the Dar’a Central Committee. In Iraq, unknown militants targeted Global Coalition forces stationed at Erbil International Airport with two explosive-laden drones. Lastly, tensions in Palestine heightened as Palestinian fugitives were recaptured by Israeli forces, having escaped from Gilboa prison the week prior. Rockets fired from Gaza into Israel were met with retaliatory airstrikes on Hamas Movement positions within the Gaza Strip, while widespread riots and demonstrations were reported across the West Bank in support of the prisoners.

In Yemen, demonstrations broke out in several districts of Aden and Hadramawt governorates last week over deteriorating living conditions, fomented by the depreciation of the Yemeni Rial.1In July 2021, the Yemeni Rial dropped to a historic low above YR 1,000 per USD 1 (Sanaa Center for Strategic Studies, 5 August 2021). ACLED records more demonstration events in Aden last week than during any week since the beginning of coverage in January 2015. In a number of demonstrations, security forces — affiliated with the STC in Aden and with the Hadi government in Hadramawt — cracked down on demonstrators with live fire, resulting in nine reported fatalities.2Six in Aden and three in Hadramawt. The unrest culminated in the declaration of a state of emergency across southern governorates by STC President Aydarus Al Zubaydi (STC, 15 September 2021).

Further north, Houthi forces renewed their offensive in Al Bayda governorate last week after several weeks of calm frontlines. They succeeded in retaking large swathes of territory from pro-Hadi forces in Maswarah, As Sawmaah, and Mukayras districts, with some sources reporting that they had now taken control of the entire governorate (Yemen Window, 15 September 2021). From Al Bayda, Houthi forces launched an offensive into Bayhan district of neighboring Shabwah governorate, where they also managed to take control of a number of sites and to make progress towards the district center. Houthi forces had been expelled from Bayhan in December 2017 and are now engaging pro-Hadi forces there for the first time since then.

In Saudi Arabia, Houthi forces continued to launch drone and missile attacks last week, albeit to a lesser extent than the previous two weeks. Saudi forces claim to have intercepted all of the attacks. Meanwhile, in a rarely reported event, Saudi forces tortured and killed a Yemeni businessman in Jizan province on suspicions of working with Houthi forces.

In eastern Syria, an unidentified military-grade drone conducted an airstrike on Iraqi PMF and pro-Iran militia positions in Al Heri town in southern Deir-ez-Zor on 14 September. Three PMF fighters were killed and several others were wounded.

In southern Syria, regime forces and members of the Dar’a Central Committee reached an agreement to settle the status of wanted individuals in Yadudeh last week – many of whom are local and former rebels as well as regime defectors. Regime forces and Russian military police entered the town on 13 September (Alaraby, 13 September 2021).

In Iraq, unknown militants targeted Global Coalition forces based in Erbil International Airport with two explosive-laden drones last week. One drone impacted the base perimeter while the second detonated just outside the perimeter, though only material damage was reported. A similar attack targeted the airbase in July 2021. Meanwhile, the Iraqi Military Technical Committee held a meeting with their American counterparts in Baghdad city on 16 September. The two sides agree to reduce US military presence at the Ayn Al Assad air base in Anbar and the Erbil military base by the end of September 2021. No details on the exact force presence reductions were given (Shafaq News, 17 September 2021).

In Palestine, tensions remained high in the West Bank last week following the jailbreak of six Palestinian prisoners from Gilboa prison in Israel during the week prior. The escapees include a prominent former commander of Al Aqsa Martyrs Brigade and five members of the Palestinian Islamic Jihad. The jailbreak is deemed an act of heroism and is celebrated by Palestinians. In response to the earlier capture of two fugitives, unidentified militants fired at least one rocket from the Gaza Strip into Israel on 11 September, which was intercepted by the Iron Dome defense system. Following the capture of two additional fugitives, militants launched further rockets, which were also intercepted by Israel’s defense system. Israeli fighter jets carried out retaliatory strikes on Hamas Movement positions within the Gaza Strip, with no reported casualties. Israel holds Hamas responsible for all rockets fired, despite numerous militant groups operating within the Gaza Strip (AP News, 15 September 2021). Meanwhile, dozens of riots erupted across the West Bank in support of the escapees, calling for their security.