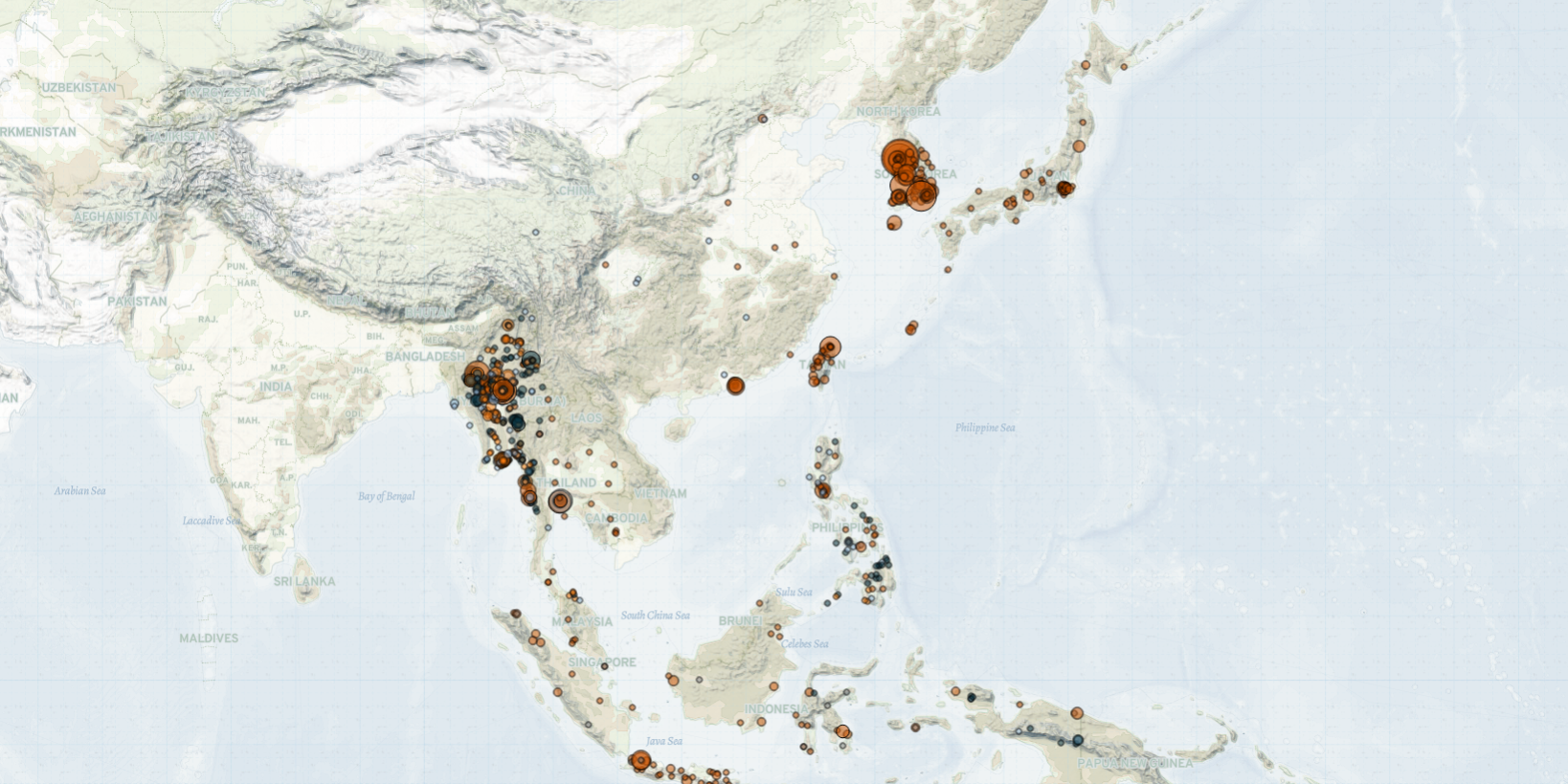 Last week in East and Southeast Asia, anti-coup supporters in Myanmar held a flash mob protest in downtown Myitkyina to oppose the junta chair’s visit to Kachin state. Meanwhile, state forces continued to crack down on individuals linked to the political opposition. In Thantlang township, Chin state, clashes between the military and the Chinland Defense Force (CDF) displaced nearly all residents. Violence involving Islamic State (IS)-linked groups was recorded in both Indonesia and the Philippines last week. In the Philippines, an IED planted by the Bangsamoro Islamic Freedom Fighters (BIFF) militants exploded and wounded eight people during a volleyball game in Maguindanao province. In Indonesia, security forces killed the leader of the East Indonesia Mujahideen (MIT) in a shootout in a village in Central Sulawesi province. Lastly, anti-government protests marking the anniversary of the 2006 coup d’etat continued in Thailand last week.

In Myanmar, anti-coup supporters continued to stage rallies against the military regime last week, with the majority of protests reported in Mandalay and Sagaing regions. Additionally, on 19 September, a group of youths held a flash mob-style protest in Myitkyina, the capital of Kachin state, to express their opposition to Min Aung Hlaing’s visit to the city. It was the junta leader’s first visit to the state since the military takeover on 1 February (Irrawaddy, 21 September 2021). His visit drew strong criticism from Kachin communities and activists, who hold the junta chair responsible for the loss of civilian lives and the displacement following a resurgence of conflict in the state (Irrawaddy, 21 September 2021). Following the coup, the Kachin Independence Organization/Kachin Independence Army (KIO/KIA) renewed fighting with the military in Kachin state, where few clashes had been reported since mid-2018 (for more on the key developments in Myanmar since the coup, see this analysis piece).

Meanwhile, state forces continued to launch deadly crackdowns on civilians associated with the political opposition last week. Several civilians — including anti-coup activists, and supporters of the National League for Democracy (NLD) — reportedly died while being detained or interrogated by state forces. At the same time, targeted attacks against military-linked individuals, including local administrators, and suspected members of the military-backed militia Pyu Saw Htee, continued last week. Local defense groups have since claimed responsibility for a number of those attacks.

The military also cut internet access in 11 more townships in Magway region and Chin state on 23 September, doubling the total number of townships without internet access (Myanmar Now, 25 September 2021). The directive comes after heavy fighting between the military and the CDF on 18 September in Thantlang township, Chin state. The CDF claims that more than 30 soldiers were killed during the shootout (Irrawaddy, 20 September 2021). Following the clash, the entire town of around 8,000 residents fled to camps on either side of the border with India (Myanmar Now, 21 September 2021).

In the Philippines, suspected militants of IS-linked BIFF detonated an IED at a volleyball match in Datu Piang town, Maguindanao province, wounding eight spectators (PNA, 20 September 2021), with some reports noting fatalities as well (Philippine Daily Inquirer, 19 September 2021). The victims of the attack were all members of the LGBTQ+ community and had reportedly received prior death threats from BIFF militants of the Karialan faction due to their gender identity or sexual orientation (ABS-CBN, 20 September 2021). However, authorities are also investigating other motives for the attack, including election-related violence ahead of the candidate nomination period (1-8 October 2021) for the 2022 elections (ABS-CBN, 19 September 2021). This is the first time that ACLED records  a targeted attack on the LGBTQ+ community by an armed group in the Philippines. It is the third IED attack by BIFF this year.

In Indonesia, the leader of the IS-linked MIT, Ali Kalora, was killed during a shootout with the Indonesian military and police forces in a mountainous area in Central Sulawesi province last week. MIT, which pledged allegiance to IS in 2014, has actively targeted members of Indonesia’s Christian minority, and its leader was known for conducting beheadings (Jakarta Globe, 20 September 2021). Notably, in November 2020, MIT killed four Christian farmers and set fire to a Salvation Army church and six houses, and killed four farmers, in Kalimago village in May 2021. MIT emerged from the grievances of the 1998-2007 Christian-Muslim communal conflict in Central Sulawesi and imported the international IS jihadi ideology to support their cause to establish an Islamic State. With the death of its leader and increasing efforts by state forces to crack down on the group, it is believed that the group has nearly been dismantled (Al Jazeera, 19 September 2021; Benar News, 18 September 2021).

Meanwhile, the number of demonstration events in Indonesia more than doubled last week compared to the week prior, due to a wave of demonstrations marking National Farmers’ Day on  24 September. Most demonstrations were staged by students demanding welfare for farmers, the resolution of agrarian conflicts, and agricultural reform (Detik, 24 September 2021).