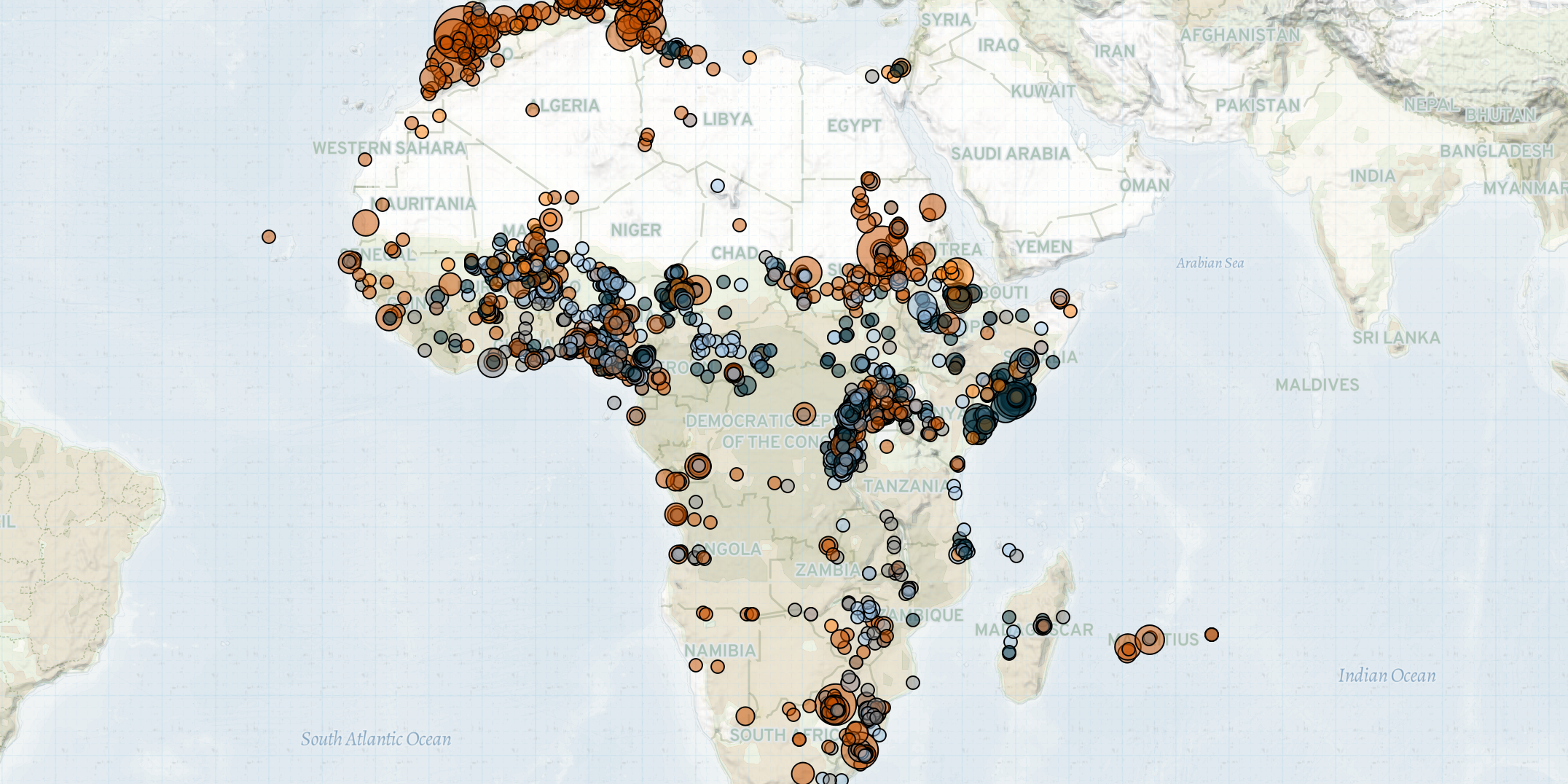 In Sudan, the head of the Sudan Armed Forces (SAF) and self-declared de facto leader of the country, Lieutenant General Abdel Fattah Al Burhan, dissolved civilian branches of the government, followed by the arrest of the civilian Prime Minister Abdalla Hamdok and several other prominent members of the Forces for Freedom and Change (FFC). The coup immediately sparked demonstrations across Khartoum and in Wad Medani, with security forces suppressing the demonstrations and killing several people. Protests spread to other major cities over the following days in advance of major demonstrations planned for 30 October (for more, see ACLED’s analysis piece on the military counter-revolution in Sudan).

In Mali, Jama’at Nusrat al-Islam wal-Muslimin (JNIM) militants pursued the campaign against the Dan Na Ambassagou militia in Bandiagara cercle of the Mopti region by attacking several militia positions. JNIM claimed responsibility for the attacks in unofficial video clips, showcasing weapons and equipment seized. As the Malian army redeployed and conducted operations in the Niono cercle in the central Segou region, it was accused of killing eight Fulani villagers in Ndolla village, with the military denying the allegations. Elsewhere in the Gao region, gunmen suspected to be from the Tuareg Imghad Imakalkalane faction carried out a lethal attack against a checkpoint of several militias, including Ganda Izo, in Wabaria, near the city of Gao.

In Burkina Faso, high levels of widespread violence persisted. JNIM militants carried out coordinated attacks against gendarmerie units in the Sourou province of the Boucle du Mouhoun region. Suspected JNIM-affiliated Katiba Macina fighters also launched a deadly attack against Burkinabe military forces in the Sirakoro area in the Cascades region. In response, the Burkinabe forces conducted airstrikes targeting militant positions in the area the next day. In addition, suspected Islamic State West Africa (ISWAP) Greater Sahara faction militants targeted a convoy transporting employees and supplies of a Canadian mining company near the Essakane mine in the Seno province of the Sahel region, wounding several workers and setting vehicles on fire. Militant groups have stepped up attacks against economic targets in the Central Sahel region.

In Nigeria, ISWAP Lake Chad faction militants launched an ambush against Boko Haram (JAS) fighters in the Abadan Local Government Area (LGA) of Borno state, killing two high-ranking commanders and several JAS militants. Clashes between the two groups in the past month have left dozens of militants dead. ISWAP fighters also clashed with the Nigerian military forces in Borno and Yobe states. The convoy of the governor of Borno state came under attack by suspected Islamist militants in the northern part of Malam Fatori near the border with Niger. The governor was visiting the area to assess the security situation after announcing the decision to shut down camps for internally displaced people (IDPs) (Reuters, 31 October 2021). Meanwhile, violence perpetrated by communal militias continued, particularly in the northwestern region. In Niger state, the militia raided a mosque in Maza-Kuka community of the Mashegu LGA, killing and abducting dozens of worshippers. Elsewhere in the southeastern region, deadly clashes were reported between the Indigenous People of Biafra (IPOB) and Nigerian military forces amid IPOB threats to impose a week-long lockdown derailing the upcoming Anambra state election on 6 November if their leader is not released (The Guardian, 24 October 2021).

In the Central African Republic, following the declared ceasefire two weeks ago, the deputy general coordinator and several leaders of the Union for Peace in the Central African Republic (UPC) began the disarmament process, a significant blow to the umbrella Coalition of Patriots for Change (CPC). Meanwhile, military forces and their allied Russian mercenaries from Wagner Group continued to engage in violence against civilians. Airstrikes and ground operations in and around Ippy in the Ouaka prefecture left at least a dozen civilians dead and properties destroyed.

In the Democratic Republic of the Congo, Allied Democratic Forces (ADF) militants launched several deadly attacks against civilians in the Beni territory of North-Kivu province. In addition, last week, several remote attacks were reported in Uganda. The Islamic State Central Africa Province (ISCAP) claimed a deadly bomb attack by allied ADF fighters in a restaurant in Kawempe, north of Kampala. This comes just two weeks after ISCAP claimed its first attack in Uganda in the same location. The attack was followed by an ADF suicide bomb attack on a bus in Lugala, near the capital. Later in the week, a fruit-shaped bomb killed two children in a village in the Nakaseke district, with no immediate claim of responsibility.

In Somalia, clashes intensified between government security forces (SNA) and Galmuudug state forces and the formerly allied Ahlu Sunna Wal Jamaa (ASWJ) militia. Multi-day clashes in Guri-Ceel town of the Galgaduud region left dozens dead and displaced at least 100,000 people. Reports of ASWJ activity emerged in the past month with ASWJ taking over territories in the Dhuusamareeb district of the Galgaduud region.

In Zimbabwe, demonstrations were held across the country against the imposed sanctions by the US and its allies amid continuing violence against the Movement for Democratic Change Alliance (MDC-A) members and supporters by suspected Zimbabwe African National Union-Patriotic Front (ZANU-PF) members.

Lastly, skirmishes were reported in Libya between the Zawiya militia and another militia as well the Stability Support Apparatus of the Libyan police forces in Az Zawiyah, severely damaging the Zawiya oil refinery complex. In neighboring Egypt, President Abdel Fattah al-Sisi announced the lifting of the state of emergency in place since April 2017.