Nonetheless, “politicized homophobia” has not prevented LGBT+ activists from organizing for change in their communities (Currier, 2018), and from challenging discriminatory laws across Africa. Successes of this activism are evidenced by the recent passage of new legal protections against LGBT+ discrimination in Angola (Samanga, 11 February 2021), and positive moves toward the repeal of a colonial-era law criminalizing sex between men in Namibia (Reuters, 28 May 2021).

In other contexts, such as in Ghana, the legislative environment is worsening for the LGBT+ population. In July 2021, Ghanaian parliamentarians introduced a bill to criminalize both the advocacy of LGBT+ rights as well as the provision of social or medical support to the LGBT+ community (The Guardian, 23 July 2021). The bill, which is still before parliament, has received support from prominent elements of society, including from church groups (BBC, 11 October 2021). Perpetrators often use anti-LGBT+ and other discriminatory legislation in the justification of acts of violence targeting LGBT+ communities. In one such incident in August 2020, Tunisian police used an ID check as a pretense to attack transgender activists as they walked near the French embassy in Tunis — assaulting the activists after seeing that their IDs did not match their gender identity (Nawaat, 8 December 2020).

It is, however, difficult to monitor and understand the full extent and nature of political violence targeting people based on their perceived gender and sexuality. Media coverage likely underestimates the extent of gender- and sexuality-based political violence, with survivors often not reporting this violence due to the potential for reprisals and further targeting (Arcus Foundation and Iranti, 2019). Sexual violence targeting the LGBT+ community is especially underreported because of fears of repercussions, legal restrictions, and psychological trauma. In some countries, like Tanzania, political leaders exacerbate this underreporting by cracking down on civil society organizations and censoring media outlets, especially those covering LGBT+ issues (Human Rights Watch, 3 February 2020). This limits scholars, policymakers, and practitioners from understanding the scale of the violence and from detecting trends across contexts. Without this information, basic questions go unanswered about who perpetrates this violence, how many people experience it, and where and when it occurs.

ACLED endeavors to track trends detailing when and where members of the LGBT+ community are specifically targeted. However, the limitations created by underreporting continue to pose challenges. ACLED, like all data collection efforts, is only able to record incidents that are reported. Additionally, ACLED specifically tracks political violence taking place in the public sphere, meaning that interpersonal, domestic, and criminal violence, for example, are not included as part of ACLED’s catchment. ACLED also tracks physical violence specifically. Threats and intimidation, as well as other forms of non-physical harassment, that individuals may experience as a function of their perceived gender or sexuality are not included within ACLED’s catchment. As such, while the data collected by ACLED are a useful tool for tracking trends in physical political violence faced by members of the LGBT+ community, they do not capture the entirety of violence faced by this community. It is important to consider these parameters when drawing conclusions from the data.

ACLED sources information from both local and international media, as well as from human rights organizations and local community networks (see our Sourcing FAQs and Partner List for more detail). These data can provide scholars, policymakers, and practitioners a greater understanding of the nature of political violence targeting LGBT+ communities, including mob violence and organized political violence.1ACLED data on political violence targeting LGBT+ communities captures cases of political violence in which the gender identity or sexual orientation of the victim(s) is salient in their targeting. This includes events in which members of the LGBT+ population make up the entirety or majority of victims, or are the primary target of the attack. An introduction to ACLED data, along with core methodology documents, user guides, and access guides, can be found here.

A new targeted supplementation of ACLED data on this violence has added nearly 100 events to the dataset. Below, trends in the expanded data on political violence targeting LGBT+ communities in Africa are explored. 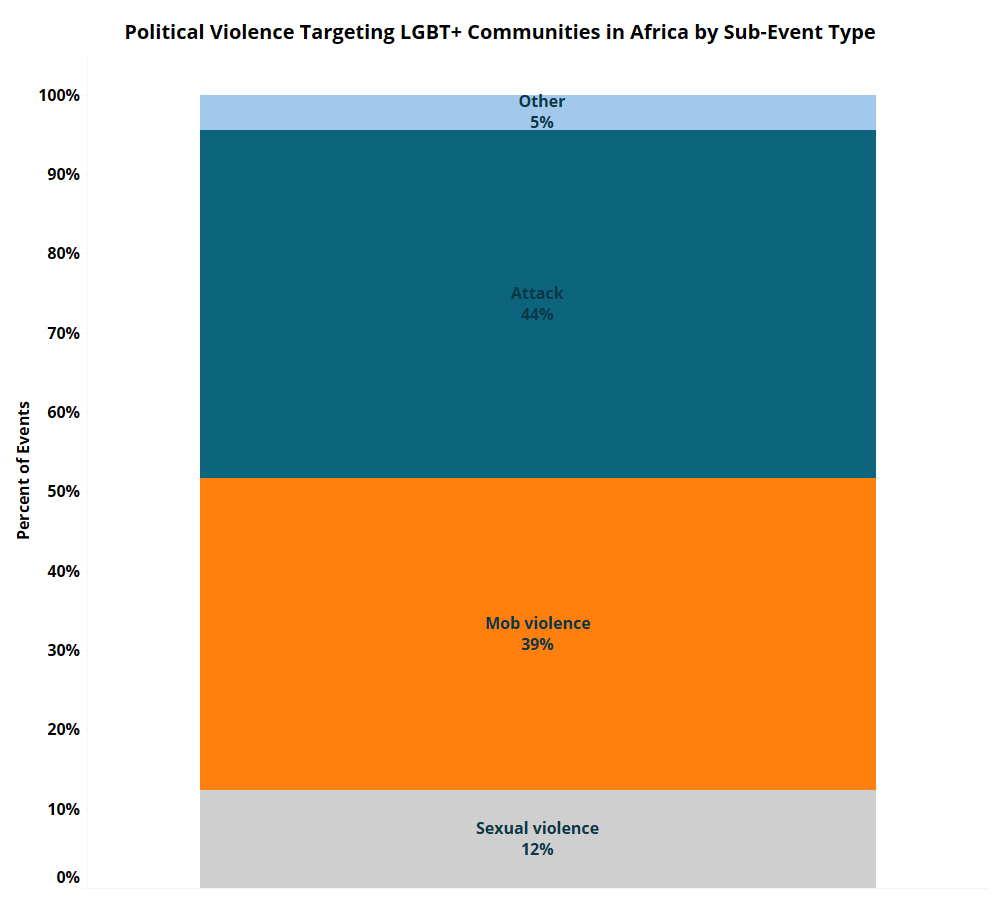 The often anonymous nature of these acts allows perpetrators to enjoy impunity for the violence. Furthermore, in countries with anti-LGBT+ legislation, perpetrators of such violence often assume the role of vigilantes (The Guardian, 8 October 2015). Vigilante groups believe they are delivering justice, emerging to address perceived failures in local security structures and enforce the law as they understand it. In doing so, they challenge the state’s monopoly on the use of legitimate force — which is why they are viewed as agents of political violence captured by ACLED (Kishi, 2017). While vigilante mobs can be common in specific contexts, their ‘informal’ status often results in their exclusion from analysis of gender-based violence (Kishi and Olsson, 2019).

This kind of violence is especially prevalent in Nigeria, Kenya, and Ghana. In Nigeria, for example, there are a number of incidents in which groups of men or large mobs beat up people accused of being gay. For example, in February 2021, a mob beat up two men in Delta state for having sex (Sahara Reporters, 11 February 2021). In Kenya, several instances of mob violence targeted refugees and people seeking asylum based on their perceived gender identity and sexual orientation. For example, ACLED records several acts of mob violence targeting LGBT+ people in the Kakuma refugee camp in Turkana county (Reuters, 13 December 2018; New Frame, 3 December 2019). The Kakuma refugee camp continues to be a dangerous place for many LGBT+ people, leading the UN Refugee Agency (UNHCR) to issue a statement condemning violence and committing to the protection of LGBT+ people in the camp in 2021 (UNHCR, 25 March 2021). In Ghana, mob violence incidents include multiple attacks on people attending weddings and parties, while other beatings and stonings happen in the streets. Police officers have also participated in the mob violence or have abused victims after arresting them. For example, a police officer kicked an LGBT+ activist while interrogating her during a mob attack in Kumasi in September 2009 (Human Rights Watch, 8 January 2018).

Non-sexual attacks by organized armed groups account for nearly half of all political violence targeting LGBT+ civilians in Africa (in teal on graph above). Anonymous or unidentified armed groups carry out about half of these attacks. In some cases, both state and non-state actors have carried out attacks and raids against organizations, shelters, and clinics, as well as activists working on LGBT+ issues. For example, in March 2020, Ugandan police and local residents attacked a shelter for LGBT+ civilians in Wakiso district (Human Rights Watch, 3 April 2020). While police allegedly carried out the raid as part of COVID-19 enforcement measures (Human Rights Watch, 3 April 2020), the attack fits into a wider pattern of the repression of marginalized groups and political opponents by the state during the COVID-19 pandemic (for more, see this ACLED infographic tracking the use of state force during the pandemic in Uganda).

Additionally, 12% of political violence targeting LGBT+ civilians in Africa takes the form of sexual attacks by organized armed groups (in light gray on graph above). This figure is notably high when compared to the civilian population at large, where sexual violence constitutes less than 3% of all violence targeting civilians in Africa. This suggests that this type of political violence disproportionately targets the LGBT+ population. State forces, namely police, carry out the vast majority — over 80% — of such violence in Africa. It is most prominent in Nigeria, where police have arrested, beaten up, and sexually assaulted men accused of being gay. For example, police beat and sexually assaulted a man with a stick in Lagos in August 2015 after arresting him on suspicion of being gay (Human Rights Watch, 20 October 2016).

Oppressive legislative environments, as well as expressions of homophobic and transphobic political rhetoric, embolden perpetrators of political violence targeting LGBT+ civilians — whether mobs, state forces, or non-state armed groups. State actors, at times, exploit anti-LGBT+ and other discriminatory legislation to justify extrajudicial acts of violence, as violent mobs take enforcement of what they believe to be the law into their own hands. As legislative environments worsen in countries such as Ghana, perpetrators of political violence targeting LGBT+ civilians are only likely to be further encouraged. Continued monitoring of these trends is an important step towards shedding light on these offenses and improving protections for civilians.

Kaden Paulson-Smith is an Assistant Professor of Democracy & Justice Studies at the University of Wisconsin, Green Bay and a former ACLED Africa Researcher. Their current research traces the development of the colonial police and carceral state in East Africa.