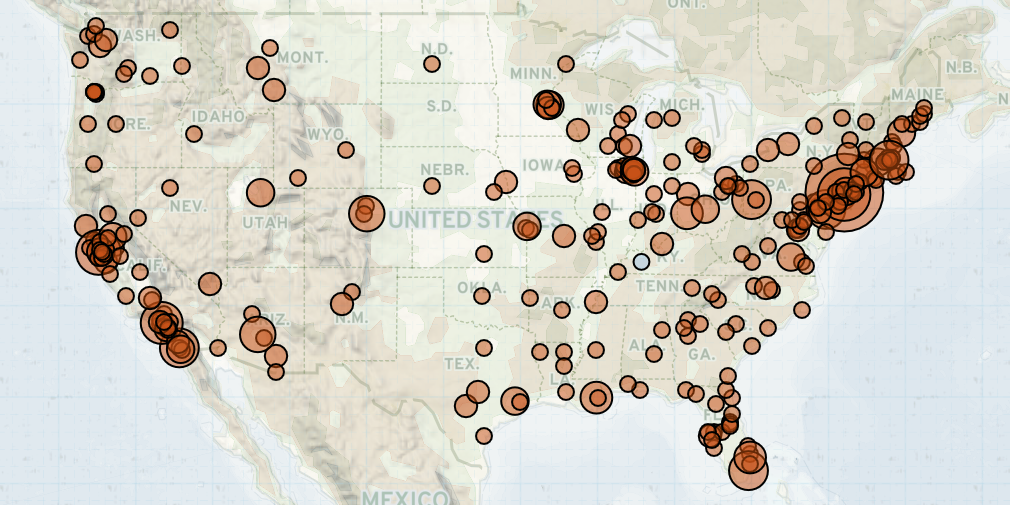 While demonstration levels in the United States declined towards the end of 2021, they rebounded in the first week of 2022, largely in connection with the first anniversary of the Capitol riot on 6 January. Overall, demonstrations during the past month were relatively subdued compared to the month prior, as the week of 25 December marked the lowest number of demonstration events since the spring of 2020, before the first wave of George Floyd protests.1Demonstration levels in the United States tend to taper off around the week of 25 December, coinciding with the Christmas holiday. Demonstration events related to the COVID-19 pandemic continued, though at lower levels compared to the previous month and as a lower proportion of all demonstrations. Finally, militias and militant social movements also remained active.

On 31 December, prison abolition groups held demonstrations outside detention facilities across 13 states as part of an annual New Year’s Eve solidarity movement in the United States and Canada. Demonstrators staged these rallies to show solidarity with imprisoned people while building momentum for the new year (It’s Going Down, 3 January 2022). These demonstrations mark the highest single-week level of demonstrations calling for improved prison conditions or prison abolition in over a month, when Julius Jones’s execution was commuted (AP News, 18 November 2021).

While fewer demonstration events over abortion access occurred over the past month compared to preceding months, tensions over abortion led to at least one destructive incident. On 31 December, the Planned Parenthood in Knoxville, Tennessee was intentionally set on fire overnight, destroying the building (New York Times, 7 January 2022). Investigators have yet to announce a suspect. This is the second violent or destructive incident at the Knoxville, Tennessee Planned Parenthood in 2021, following a shooting in January that shattered the front door.

Militias and militant social movements participated in numerous training, recruitment, patrol, and demonstration events over the past month as well. Militias demonstrated outside two state capitols last month: Three Percenters rallied in Albany, New York, while members of Mamalitia rallied in Sacramento, California. Both events were organized in opposition to coronavirus restrictions, with Mamalitia members rallying against a vaccine mandate for California schools.

The openly white supremacist group Patriot Front continued to hold trainings over the past month, including multiple close-quarters combat trainings in Massachusetts, as well as shield usage trainings in Texas and Oklahoma. The neo-Nazi Nationalist Social Club was also active over the past month. In addition to holding a sparring training event in Boston, Massachusetts, members of the group demonstrated against a drag queen story hour at a theater in Portsmouth, New Hampshire, while making derogatory statements against drag queens.

A spike in anti-Semitic activity also occurred during the past month. Flyers with anti-Semitic messaging were distributed by the Ku Klux Klan in Dunkirk, Maryland, marking the group’s first recorded activity since the summer of 2021. Notably, anti-Semitic Goyim Defense League (GDL) flyers, many of which claimed that Jewish people are responsible for the COVID-19 pandemic, were placed outside houses in Missouri, North Carolina, Idaho, Maryland, Texas, and California. Most of these GDL flyer distributions occurred during the weekend of 18 and 19 December, as part of a “propaganda challenge” (Anti-Defamation League, 20 December 2021). GDL members also displayed anti-Semitic banners over interstates in Brevard County, Florida and San Diego, California that weekend.

A ‘White Lives Matter Day of Action’ on 18 December also included GDL participation at a rally in DeLand, Florida, while similar demonstrations were held in Houston, Texas and Helena, Montana. Meanwhile, members of the National Socialist Movement and Proud Boys attended a ‘White Lives Matter’ demonstration in Florida. Proud Boys also demonstrated against “left-wing activists” at a Miami-Dade School Board meeting on 16 December, leading to the arrest of two demonstrators (Twitter @MIAgainstFash, 16 December 2021).

Finally, Veterans on Patrol (VOP) carried out multiple patrols in Arizona along the US-Mexico border. On 24 December, members of VOP carried out several patrols, encountering eight migrants total, whom they turned over to US Border Patrol, despite previous Border Patrol claims of non-cooperation with VOP (SPLC, 2 December 2021). VOP also carried out a patrol on 12 December, but it is unclear if they detained the six migrants (five of whom were children) that they encountered.