Abortion-Related Demonstrations in the United States

Shifting Trends and the Potential for Violence

Abortion-related demonstrations have surged across the United States ahead of the Supreme Court’s decision on the future of Roe v. Wade, with more events already reported this year than in all of 2021. These demonstrations have become increasingly contentious, with a significant rise in counter-demonstrations, armed protests, and engagement by far-right groups like the Proud Boys — trends that are all linked to heightened risks of violence. This report analyzes the latest ACLED data on these shifts and assesses the potential for protest violence in the aftermath of the Supreme Court ruling.

A draft majority opinion, leaked on 2 May 2022, indicates that the United States Supreme Court will likely overturn Roe v. Wade — the landmark ruling protecting the right to an abortion without excessive government restriction (Politico, 2 May 2022). If the decision is made official, it will release a wave of current and planned state legislation to restrict abortion access. Upon news of the leaked opinion, ‘pro-choice’ demonstrations — those in support of abortion access — broke out across the country (New York Times, 3 May 2022). At the same time, ‘pro-life’ demonstrators — those opposed to abortion access — mobilized in support of the draft opinion, celebrating the impending end of Roe v. Wade. 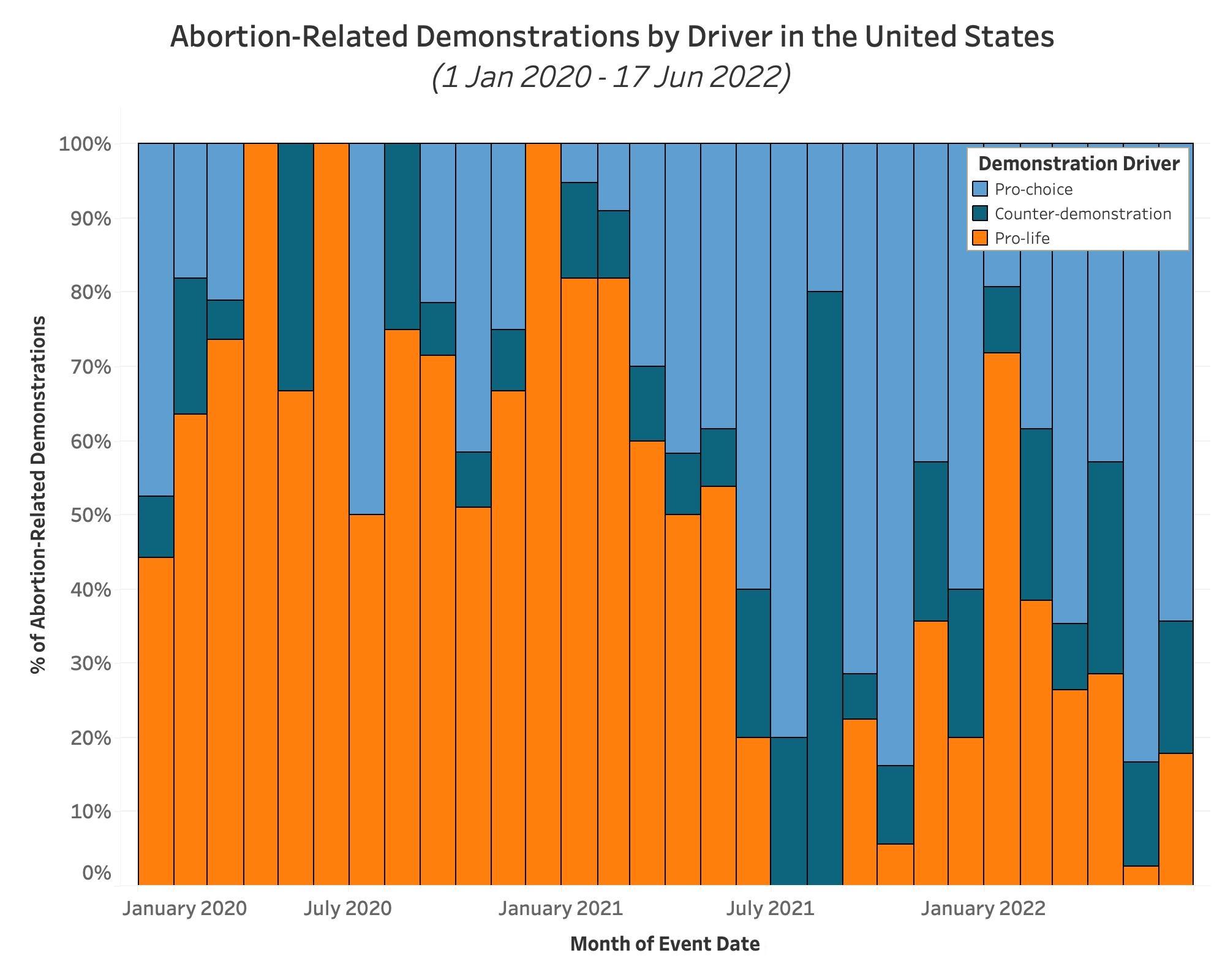 Abortion-related demonstrations have been on the rise, increasing by 129% in 2021 compared to 2020 (from 253 demonstration events to 580), and by 51% already in 2022 relative to 2021 (with at least 875 events reported as of 17 June 2022). These demonstrations have spiked around key dates like the anniversary of Roe v. Wade in January and the annual ‘March for Life’ against abortion access (see graph below). The surge of demonstrations in October 2021, however, significantly surpassed all other abortion-related demonstration spikes recorded by ACLED, driven by a major increase in pro-choice activism during the fifth annual ‘Women’s March’ after the Supreme Court declined to block the Texas Heartbeat Act (NBC, 2 October 2021). Since then, further spikes have been recorded in the aftermath of the Supreme Court leak. 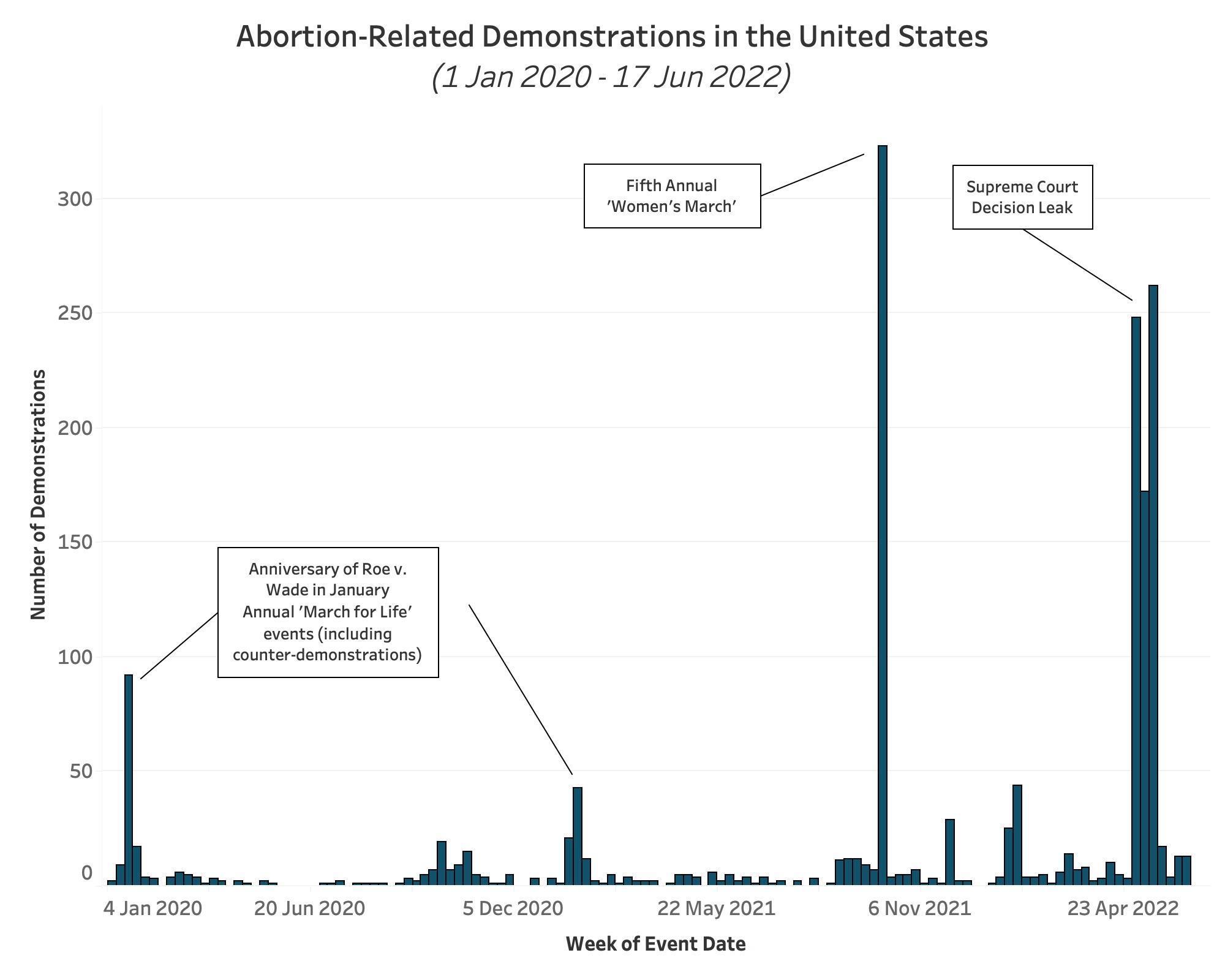 As abortion-related activism has continued to grow, it is likely that the official decision regarding Roe v. Wade will be met with another surge in demonstrations, and the Department of Homeland Security is warning of heightened potential for violence (Axios, 18 May 2022). Analysis of ACLED data on multiple key shifts in recent demonstration activity provides an indication of future trajectories for abortion-related mobilization, including an increased risk of violence, and a look at trends to watch in the wake of the ruling. These shifts are explored below.

Abortion-Related Demonstrations More Likely to be Opposed by Counter-Demonstrators 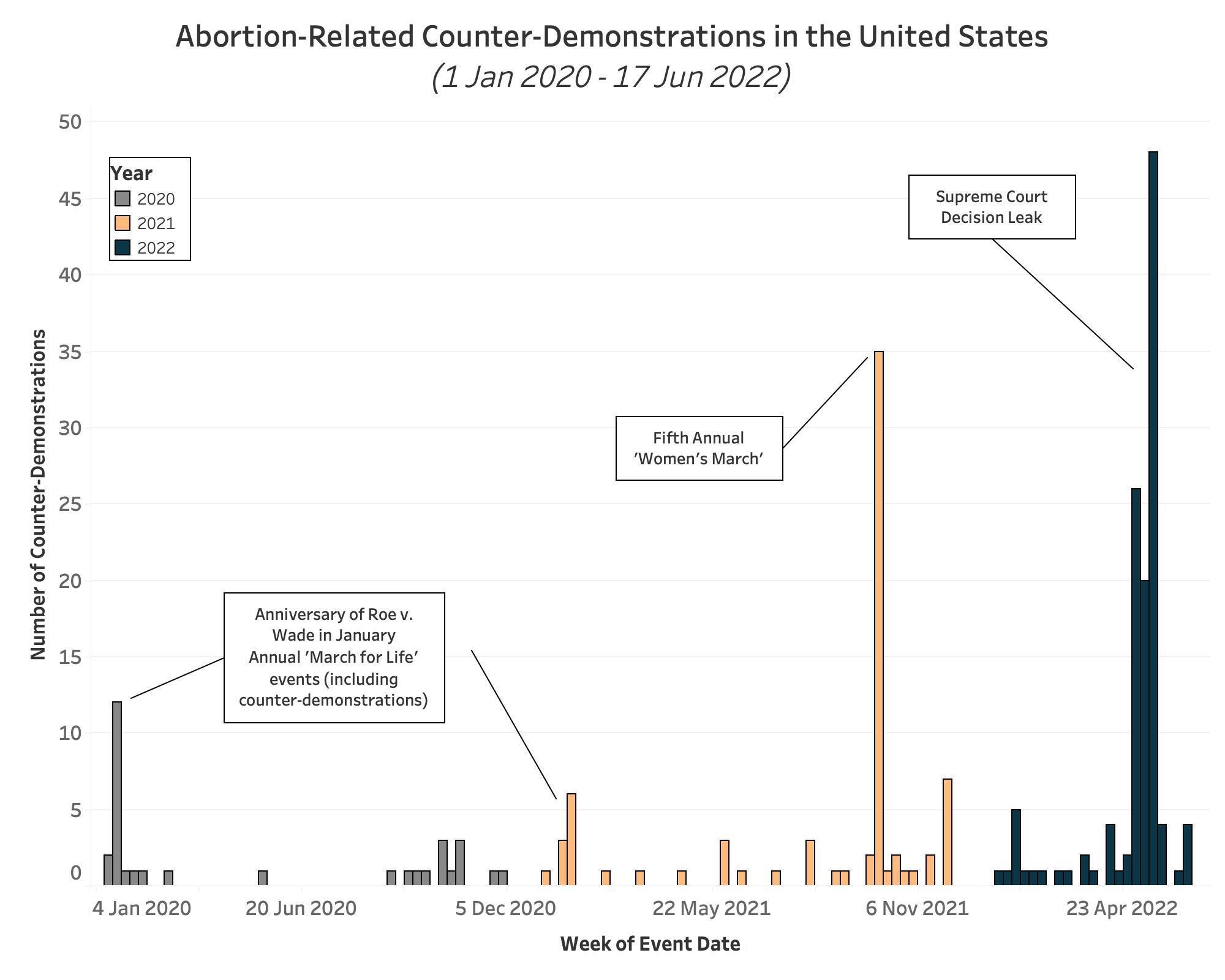 Firearms More Likely to be Present at Abortion-Related Demonstrations

As of 17 June 2022, a total of 10 armed abortion-related demonstrations have been reported since 2020. In 90% of these events, pro-life demonstrators were armed. Many of these demonstrators were affiliated with far-right groups and movements, such as the Proud Boys, White Lives Matter (WLM), Three Percenters, and Open Carry Texas, among others (Twitter @az_rww, 14 May 2022; It’s Going Down, 20 May 2022).7Additional reports come from a Youtube channel reporting right-wing militia activity, purposefully not linked to here. This source is shared by ACLED’s partner, MilitiaWatch. For example, on 10 August 2021, anti-abortion demonstrators rallied in Salem, Oregon, as part of a ‘prayer’ against abortion. Among the demonstrators were Proud Boys and unidentified militia members, many armed with firearms as well as bear mace and paintball guns. Antifascists and other counter-demonstrators rallied in support of the Planned Parenthood nearby and were attacked by the anti-abortion activists before a broader clash broke out (Twitter @AissaAzar, 10 August 2021; The Center Square, 11 August 2021).

While mobilization around abortion access has not been a primary motivator of demonstration activity for far-right militias and MSMs in recent years, their focus is shifting (see graph below). Only 1% of demonstrations involving far-right groups were related to abortion access in 2020, but this increased to 3% in 2021 and more than 14% so far in 2022. Engagement particularly spiked in the aftermath of the Supreme Court leak which was celebrated by many on the far right (Vice News, 3 May 2022). 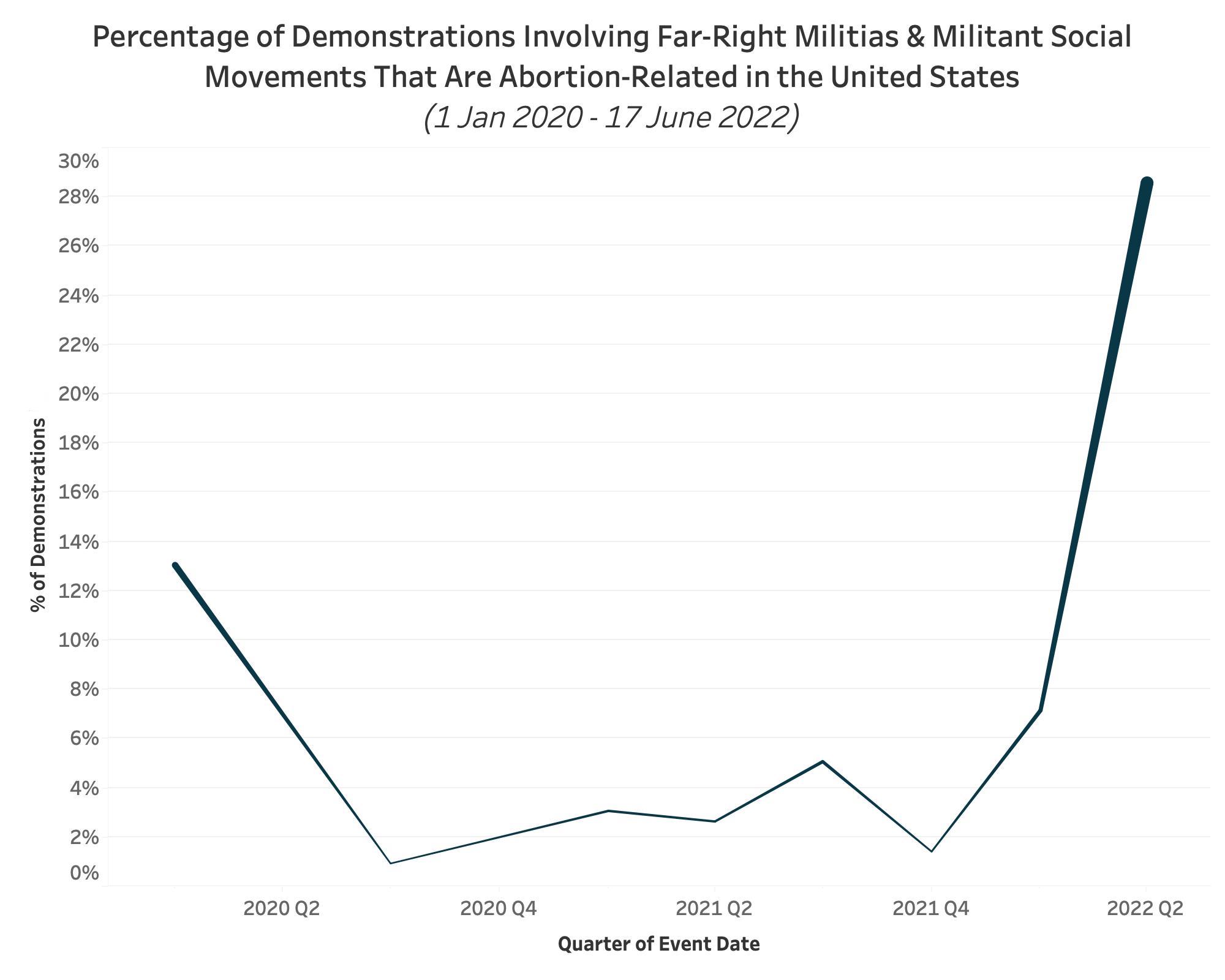 Increased mobilization around the abortion debate, however, initially began in the summer of 2021, when a number of new motivators, including abortion access, started to play a larger role in far-right activity (see graph above). During this time, many far-right groups worked to adapt their organizing strategies to appeal to a wider audience in the aftermath of the 6 January 2021 attack on the United States Capitol and the heightened legal pressure that followed. In some cases, groups began to shift focus toward seeking out  new supporters to co-opt by increasing local-level organizing around issues with wide purchase among the broader right-wing activist community. This in turn has led to increasing engagement in demonstrations opposed to abortion as well as Critical Race Theory and LGBT+ rights. Such engagement has allowed far-right militias and MSMs to network with new groups and individuals, specifically those not traditionally part of the militia milieu, such as those on the religious right. It has also provided an opportunity for networking and cross-pollination among different far-right groups themselves.

At least three far-right groups, the Proud Boys, Patriot Front, and Groypers, engaged in abortion-related demonstrations in 2021. As of 17 June 2022, this has increased to at least 10 groups8In addition to Proud Boys, Patriot Front, and Groypers, other groups now involved in abortion-related demonstrations include: AZ Patriots, ‘Good Citizens’ Militia, Haywood Militia, QAnon, Rise Above Movement, Three Percenters, and WLM. As some reports note the presence of unidentified militia members, this is likely an underestimate. — over three times as many before the midpoint of the year. For example, on 14 May 2022, over 1,000 people gathered for a protest at the state capitol in Phoenix, Arizona, in support of access to abortion, with demonstrators including Democratic political figures and representatives from Planned Parenthood Advocates of Arizona9The organization bills itself as the advocacy arm of Planned Parenthood (AZ Central, 14 May 2022). and the American Civil Liberties Union (ACLU). Several dozen counter-demonstrators gathered to oppose the event, including unaffiliated Christian groups and Students for Life along with Proud Boys, Three Percenters, AZ Patriots, Bikers for Trump, Riders USA, the Good Citizens militia, supporters of the WLM movement, and at least one Groyper. Some Proud Boys and WLM supporters were armed with ‘long guns’ and body armor  (Twitter @az_rww, 14 May 2022; It’s Going Down, 20 May 2022). Such a broad coalition of counter-demonstrators — both armed and unarmed — exemplifies the networking opportunities represented by anti-abortion activism for far-right groups, as well as the heightened risk of escalation10A separate group of anarchist counter-demonstrators was also gathered to demonstrate against both the larger pro-choice group and the pro-life counter-demonstrators. (for more on the evolution of far-right activity in the United States, see this recent ACLED report).

Beginning in summer 2021, the Proud Boys began to increasingly engage in pro-life demonstrations,11The Proud Boys were already one of the most active far-right groups in the country in 2020 even before they escalated their protest activity in 2021 by 16% (116 demonstration events in 2020 up to 134 in 2021), in line with a proliferation of local chapters across the country (SPLC, 2022). This increase in activity has been made increasingly worrying given an increased reliance on even more violent tactics at demonstrations, despite already being a group known to strive to escalate tensions. They have already been engaged in 47 demonstration events in 2022 as of 17 June 2022. in line with a strategic shift in their activity in the aftermath of the Capitol riot (Vice News, 5 January 2022) to build new alliances with other right-wing groups and movements (NPR, 29 September 2021). Prior to summer 2021, the Proud Boys were only infrequently involved in protests related to abortion and had only on rare occasion appeared at demonstrations alongside Christian groups. Just 2% of demonstrations involving the Proud Boys were related to abortion access in 2020, but this increased to 4% in 2021. As of 17 June 2022, it is now up to nearly 26% this year (for more on the evolution of activity by the Proud Boys, see this recent ACLED report).

Abortion access is an increasingly important driver of demonstration activity in the United States, with activists continuing to react to an array of new laws and cases. So far in 2022, at least 42 states have introduced legislation restricting access to abortion in expectation of the Supreme Court overturning Roe v. Wade (Guttmacher Institute, 26 May 2022). With these challenges to abortion access, pro-choice demonstrations are likely to drive ongoing abortion-related demonstration activity. In particular, significant legal action, including the likely overturning of Roe v. Wade, will continue to serve as triggers for surges in demonstration events.

Overall, violent abortion-related demonstrations have increased since the Texas Heartbeat Act was signed into law in May 2021, and spiked again in the aftermath of the leaked Supreme Court decision in May 2022. The impending Supreme Court decision could set off not only a surge in abortion-related demonstrations, but also a surge in violent or destructive events. The increased political salience of the abortion debate beginning in summer 2021 has also coincided with a period in which far-right groups like the Proud Boys have begun to strategically shift activity towards a wider array of right-wing causes in order to make inroads with larger movements and activist networks on the right. The result is a worrying confluence of triggers and high-risk trends between the end of the current Supreme Court term and the lead-up to the midterm elections, which can together create a potential flashpoint for violence.