On 1 November, Israelis will go to the polls for the fifth time in three-and-a-half years. This latest round of elections follows the dissolution of a historically broad coalition — headed by Naftali Bennett and Yair Lapid — that consisted of right-wing, centrist, left-leaning parties, in addition to the first Arab party to serve in a ruling coalition in Israel’s history. The so-called change coalition was Israel’s first government without Benjamin Netanyahu as prime minister since 2009.

The formation of an ideologically diverse coalition was borne out of the feeling of necessity to prevent Netanyahu from continuing his tenure. Netanyahu, who is currently on trial for alleged bribery, fraud, and breach of trust, has become the primary fault line in an Israeli political environment that has been deadlocked since 2019. While the majority of seats in the Knesset are held by right-wing parties, reflecting an increasing number of Jewish Israelis who self-identify as right-wing (IDI, 30 August 2022), the rift among the political right over Netanyahu has prevented the formation of a right-wing government, creating two competing blocs that have shaped Israeli politics since 2019.

Polls suggest that Israelis are still split evenly between the anti- and pro-Netanyahu political camps (Haaretz, 26 October 2022). Consequently, turnout among certain sectors of Israeli society could sway the election outcome. Notably, the undecided modern religious right — many of whom voted for the Yamina party of the now-retired Bennett in the last elections — could determine the outcome of the election (Haaretz, 3 October 2022).

The prominence of Palestine as an election issue in Israel has largely waned in recent decades, with campaigns in the last elections mainly focusing on the personality of Netanyahu (The Conversation, 22 March 2021). Yet the Israeli-Palestinian conflict remains the most divisive topic in Israel, and escalation in violence has traditionally made security a central player in elections (Haaretz, 8 August 2022). The current tensions in the West Bank amid intensified armed clashes and riots have also increasingly shifted focus back to security and the question of settlements. This may drive some undecided voters to cast their ballots for more hawkish right-wing candidates in the pro-Netanyahu block.

Due to the wide-ranging composition of the coalition, the stated aim of the Bennett-Lapid government was to stick to the status quo, and to follow a policy of “shrinking the conflict” (+972 Magazine, 12 August 2021). Attempts to reduce tensions included increased contact between Israeli and Palestinian Authority officials after years of minimal ties under Netanyahu, and allowing thousands of Palestinians to work in Israel (New York Times, 30 September 2021).

Nonetheless, the security situation in the West Bank has significantly deteriorated in the lead-up to the elections. 2022 has been the deadliest year in the West Bank in recent years, with over 120 reported fatalities recorded in the first 10 months of 2022, compared to less than 100 reported fatalities across the entirety of 2021. The total number of political violence events in the West Bank during the Bennett-Lapid government, between taking office in mid-June 2021 and October 2022, almost doubled compared to the preceding 16 months under Netanyahu’s leadership. This increase has included a notable spike in political violence in October (see graph below). 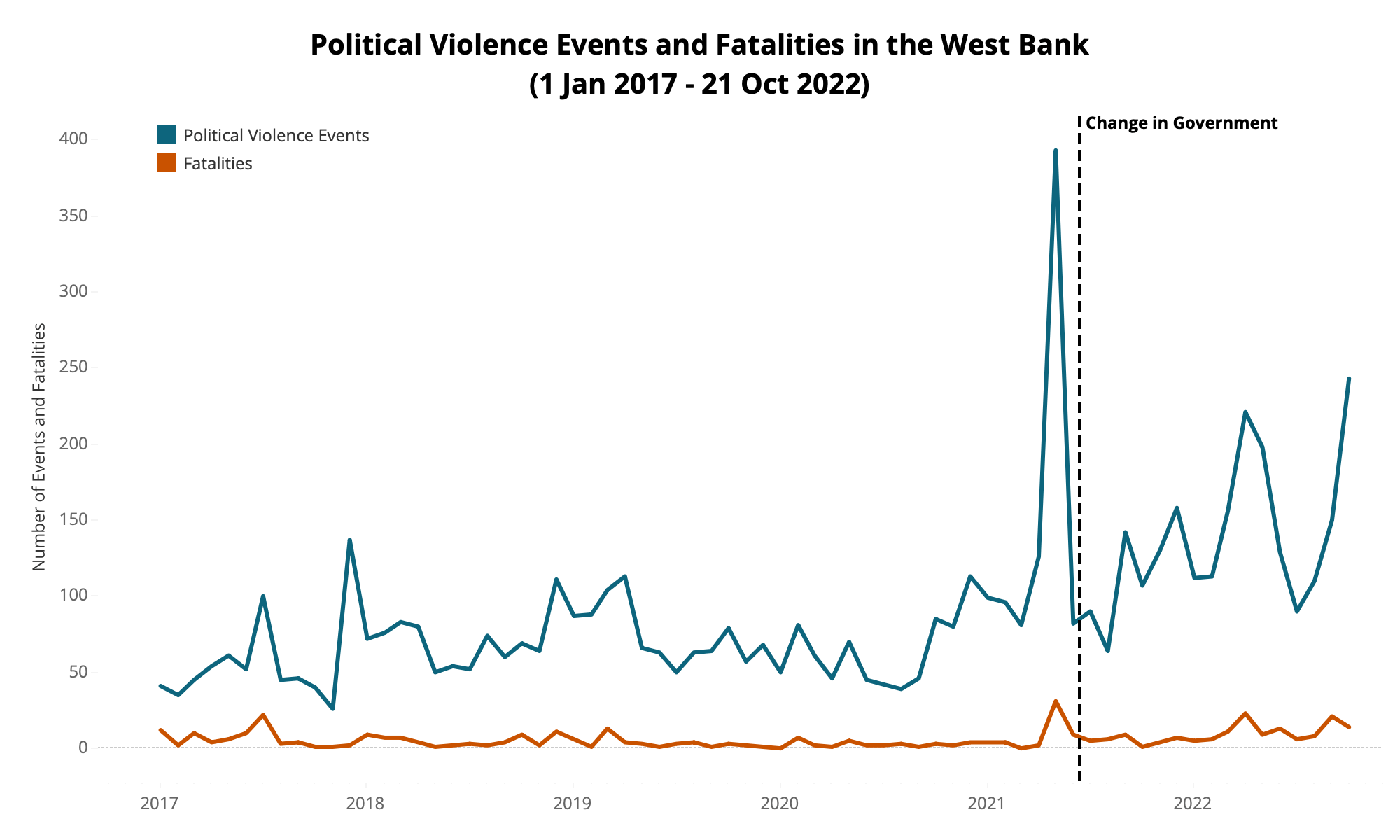 Much of this increasing violence has been driven by heightened Israel Defense Forces (IDF) activity in the lead-up to the election. Following a string of deadly attacks by Palestinian militants between March and May 2022 that reportedly killed 19 Israelis and foreigners, the IDF launched Operation ‘Break the Wave,’ with then Prime Minister Bennett giving the security forces “full freedom” to end the threats (BBC, 1 October 2022). Subsequently, the IDF stepped up raids in the West Bank to make preventive arrests (Haaretz, 13 July 2022). The total number of political violence events involving the IDF in the West Bank during the Bennett-Lapid government, between taking office in mid-June 2021 and October 2022, increased by 45% compared to the preceding 16 months under Netanyahu’s leadership (see map below). Jenin and Nablus in the northern West Bank have become hotspots for IDF activity during the latest round of violence, where the IDF has increasingly focused raids targeting Palestinian gunmen. In 2022 so far, over 170 armed clash events between the IDF and armed groups have been recorded in the West Bank, already the highest annual number ever recorded by ACLED. Furthermore, IDF has engaged with Palestinian rioters in nearly 650 events, using fatal force in more than 25 events. Ahead of the elections, the number of events involving the IDF in the West Bank reached a high in October. Some suggest that the IDF’s intensified activity is driven by Prime Minister Lapid and Defense Minister Gantz wanting to prove to voters that they take the issue of security seriously, contrary to the accusations that repeatedly come from the pro-Netanyahu bloc (Haaretz, 9 October 2022).

Political Violence in the West Bank involving the IDF

Settler groups have also leveraged this increasing focus on security in the lead-up to the election with increasingly provocative actions in the West Bank. These actions included a mass outpost creation effort by the Nachala settler organization in July, which Nachala heavily publicized in advance, prompting their rapid eviction by the IDF (Haaretz, 20 July 2022). Analysts suggest that the extensive publicity effort was likely an attempt to influence the election, shifting the spotlight back onto settlements and the question of a Palestinian state, in an attempt to move right-wing votes currently in the anti-Netanyahu camp back to the pro-Netanyahu bloc (Jerusalem Post, 22 July 2022).

In the immediate run-up to the election, settler groups have also intensified their engagement in direct violence. Particularly, tensions have increased in and around Huwwarah in Nablus, with settlers attacking shops and residents with iron rods. Settler rioters have also attacked IDF soldiers with pepper spray on at least two occasions, accusing the military of neglecting their security (Times of Israel, 23 October 2022). Israel’s Central Command officials suggest that settlement leaders are waging a shadow campaign in an attempt to show that the IDF has lost control (Haaretz, 21 October 2022).

Moreover, Israeli settlers have staged large-scale protests throughout the West Bank in recent months, leveraging the power of such actions during the election season, with the IDF increasing its presence to protect the settlers (Haaretz, 13 October 2022). This has resulted in further instances of violence. Notably, settlers’ protests in recent weeks to call for a tougher crackdown on Palestinians – attended by far-right politicians, including Itamar Ben-Gvir – have added fuel to the fire in the West Bank. Ben-Gvir is a disciple of the explicitly racist arch-nationalist Meir Kahane (Haaretz, 26 March 2021). A settler himself, and former lawyer defending radical Jewish West Bank settlers prior to transitioning to politics, police sources have stated that Ben-Gvir played a “substantial” role in the escalation of violence in East Jerusalem in May 2021 (Times of Israel, 13 February 2022). The cycle of violence has spiraled once more into intense riots in recent weeks, as settlers have clashed with Palestinians in East Jerusalem.

There are three likely outcomes from the coming election. First, a religious right-wing coalition led by Netanyahu that would include Likud, far-right Religious Zionism, as well as the ultra-Orthodox Shas and United Torah Judaism. Second, another broad, anti-Netanyahu coalition government likely headed by either Lapid or Benny Gantz that would include Lapid’s centrist Yesh Atid, Gantz’s National Unity (a joint ticket of centrist Blue and White and center-right New Hope), secular right-wing Yisrael Beytenu, left-wing parties Labor and Meretz, and, likely, the Arab Ra’am party. Finally, another deadlocked election with no clear path to a majority coalition – that would, therefore, lead to the sixth round of elections – remains a strong possibility.

A fifth election in Israel may not produce a more definitive result or a more stable government than the previous four. But any government formed after the upcoming elections would either have a narrow hard right-wing coalition led by Netanyahu or, similar to the current government, a broad center-led coalition with right-wing support. Regardless of the outcome, Israel’s shift to the right means that the country will continue its tough security policies and maintain its strong military grip on the occupied West Bank.

If Netanyahu is able to return to power in the coming election, the inclusion, and prominence, of radical figures like Ben-Gvir in a potential hard right-wing government will likely serve to exacerbate the tense political landscape. Particularly, Ben-Gvir’s inclusion as a minister in a potential right-wing coalition may encourage further settler activity and lead to more violence in the West Bank.

But also, if the anti-Netanyahu bloc is able to continue governing, a reliance on right-wing political support means that it is unlikely to shift expansionist activities in the West Bank. The settler movement is a powerful societal and political force, and serious opposition to it will jeopardize the stability of a ruling coalition. Despite a positive change in rhetoric, it remains highly unlikely that such an ideologically-diverse coalition would restart the peace negotiations, or take concrete steps toward conflict resolution and a two-state solution. Therefore, regardless of the election’s outcome, heightened levels of political violence in the West Bank seem inevitable in the current political climate.

Visuals in this report produced by Ana Marco.