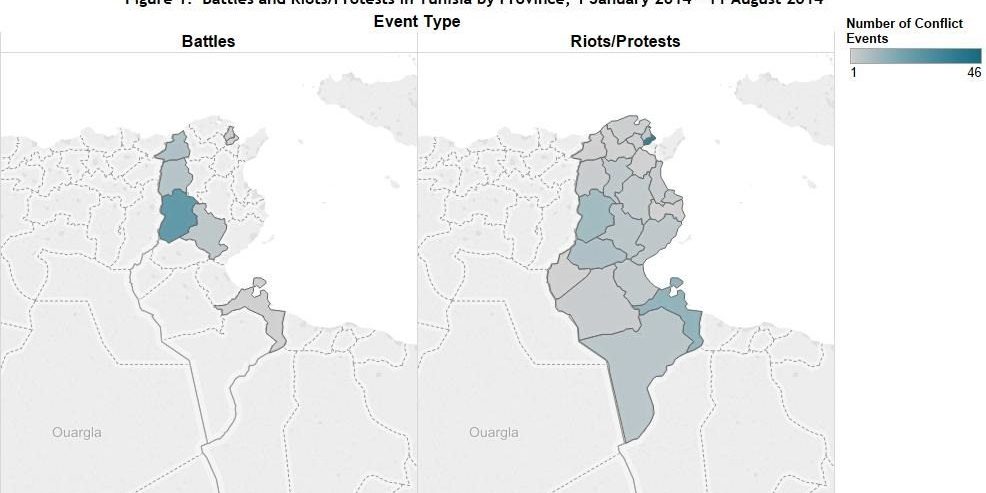 The announcement of Tunisia’s planned purchase of 12 U.S. Black Hawk attack helicopters directed international media attention towards the Tunisian military forces’ continued engagement with a violent Islamist insurgency in the Mount Chaambi and Mount Semmama areas of Kasserine in August.
Despite President Marzouki’s justification of the military expansion as a “matter of urgency” (Al Jazeera, 6th August , 2014), no dramatic increase in the number of battles occurred in 2014. While battle-related fatalities were elevated in July 2014, this was primarily owing to a single ambush on the 16th of July by Ansar al-Sharia members that killed 15 soldiers in Kasserine.

Figure 1 highlights the distribution of conflict events from the beginning of 2014 in Tunisia. Whilst the north-west region has frequently been the stage of targeted mine attacks, ambushes by militant groups and sweeping military patrols, riot and protest events were much more ubiquitous across Tunisia with the capital, Tunis, accounting for over 32% of events. In July, several of these demonstrations were mobilised as denunciations of attacks on the National Army.

Figure 2 shows that reported fatalities associated with violent clashes involving the military have far surpassed riots and protests since the beginning of 2014. However, it will remain important for the technocratic Tunisian government to balance its response to both simmering economic issues as well as its political security policy (Tunisia-Live, 15th August , 2014). The Tunisian army’s inexperience in responding to the threats posed by militant cells and counter-terrorism operations has had knock-on effects in other areas of Tunisian political life. Failure to address mounting security concerns in the past has prompted nationwide protests, culminating in 2013 with resignations from the coalition government and a cabinet reshuffle.
Despite the short-term focus on combating violent Islamist threats, failure to implement reforms that boost civil society confidence and tackle unemployment levels and inflation could damage Tunisia’s prospects of a stable transition to democracy, as shown by the conflict landscape being dominated by riots and protests.
References
Al Jazeera, 2014 ‘US to sell attack helicopters to Tunisia’ Al Jazeera, 06 August 2014 http://www.aljazeera.com/news/middleeast/2014/08/us-sell-attack-helicopters-tunisia-201486103531412440.html [Accessed 17 August 2014].
Tunisia-Live, 2014 ‘Tunisia: The Last Best Hope for the Arab Spring’ Tunisia-Live, 15 August 2014 http://www.tunisia-live.net/2014/08/15/tunisia-the-last-best-hope-for-the-arab-spring/ [Accessed 17 August 2014].