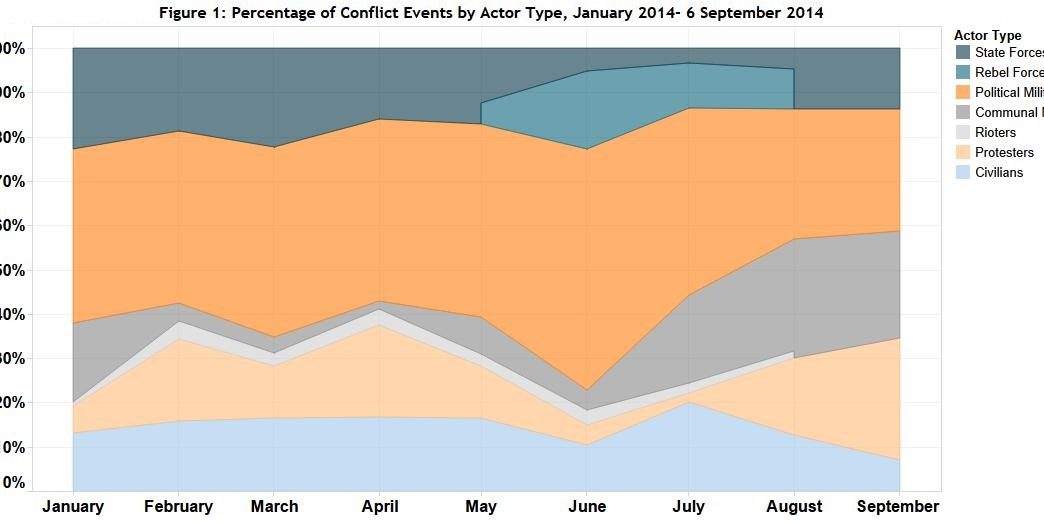 The complex political make-up of Libya’s fractured fighting groups has seen indiscriminate shelling of civilian areas as rival political and communal militias dominate the conflict landscape (see Figure 1).  According to an estimate by UNSMIL, since the fighting began in May 2014, at least 100,000 Libyans have been internally displaced (UNSMIL, 2014: 7).

Fighting in Benghazi has pitted forces collectively organised under the Islamist ‘Shura Council of Benghazi Revolutionaries’ against anti-Islamist coalition ‘Operation Dignity’ forces. Spearheading the ‘Shura Council of Benghazi Revolutionaries’ and supporting the re-establishment of the Caliphate are Ansar al-Sharia backed by the Islamist militias February 17 Martyrs Brigade and Libya Shield Brigade. The violent Islamist group is reported to control over 80% of the city (Elbrqawi, 2014) and is widely suspected of being responsible for the attack on the US consulate in Benghazi in 2012.
Under the ‘Operation Dignity’ umbrella, the anti-Islamist fighters are made up of Libyan Special Forces defectors from the Al-Qaqa and Al-Sawaiq brigades, allied with the ex-general Khalifa Haftar who announced his operation to rid Benghazi of violent Islamist groups. The retaliatory attacks between Ansar al-Sharia and groups acting under Operation Dignity have tended to incur higher fatalities than other militias (see Figure 2). This may be due to Haftar’s access to aircraft from the state forces who defected, enabling large aerial bombardment of Islamist positions in sweeping operations.

The divergent goals of Islamist-led brigades and nationalist groups have, to a large extent, catalysed the clashes in Benghazi (Stephen, 2014). Whilst clashes involving the geographically, politically and historically diverse militia groups in Tripoli are loosely attributed to Islamist motivations, they are also symptomatic of a general lack of security with neither side willing to make concessions. Amidst these territorial attacks, prospects of cooperation or disarmament between rival militias remain a challenge. A report by the RAND Corporation indicates a Misratan commander insisted that he was “not after any political, economic, or financial benefits” and that disarmament was not an option until alternative security measures were in place. (Chivvis and Martini, 2014, p. 15).