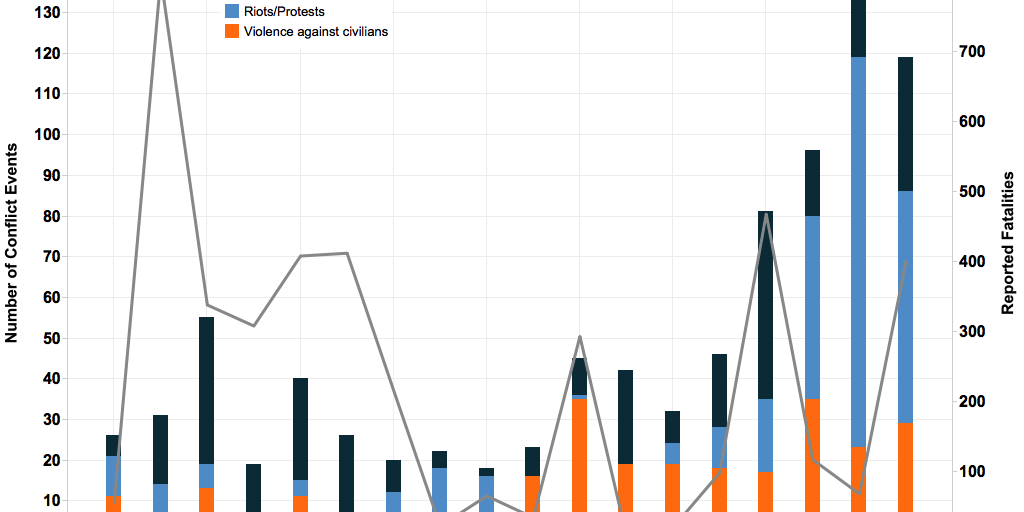 Natural resource extraction by mining (including oil, diamonds, copper, and cobalt) has tremendous positive economic potential for states. However, these resources can also do more harm than good if used towards ulterior motives including corruption, the unequal distribution of wealth, and to fuel violence. Valuable resources can both fuel violence through competition for territorial control, promoting looting and rent-seeking, as well as sustaining violence through financing conflict.

It is difficult to determine the exact role that extractive resources may play in indirectly inciting political violence. For example, while it is largely accepted that rebel groups used profits from conflict diamonds to finance civil wars in Angola, DR-Congo, and Sierra Leone (Amnesty International, 2013) it is difficult to measure the extent of the resources’ effect given its indirect role. By searching for conflict events within the ACLED dataset related to oil, mines, diamonds, and resources, one can gain an understanding of resource-related conflict with more direct links (for example, the kidnapping of an oil worker, a conflict over access to a specific diamond mine, or the protesting of an oil company). In recent years, the prevalence of conflict with direct links to these resources has been increasing – conflict occurrence is now over 5 times the level it was about 10 years ago – though the number of associated fatalities has been decreasing – fatalities related to these conflicts are lower than levels seen in the late 1990s (Figure 1).  This increased conflict rate is driven by the higher prevalence of riots and protests relating to extractive/natural resources.  While riots and protests of this sort occur across Africa (Figure 2), resource-related battles and instances of violence against civilians can be seen primarily in only a handful of countries: Nigeria, Sudan, South Sudan, DR-Congo, and Somalia.

Nigeria consistently exhibits high levels of directly-resource-related conflict, and has experienced a markedly higher number of these events relative to other African countries since 1997 (Figure 3). As the 12th largest producer of petroleum worldwide, and its 8th largest exporter, resource-related conflict in Nigeria revolves around oil. About 5% of violent conflict in Nigeria since 1997 has been explicitly resource-related. About half of that violence – i.e., about 2.5% of all Nigerian violence since 1997 – is specifically targeted at civilians (e.g., oil workers being kidnapped or taken hostage).

South Sudan sees the second highest number of explicitly resource-related conflict during the time period examined. This is especially alarming given that the country only gained independence in 2011. About 5% of violent conflict in South Sudan since 2011 has been explicitly resource-related. The vast majority of this type of conflict seen in South Sudan comprises of battles, primarily between government forces and rebel groups. Resource-related conflict in South Sudan is also oil-related, and has occurred almost exclusively in oil-rich Unity state. Similarly, Sudan has also experienced a high number of these oil-related conflicts. About half of this conflict is comprised of battles, which occur largely in the highly contested Abyei region. Though citizens of the region are arguably in favor of joining South Sudan (BBC, October 31, 2013), the area remains a part of Sudan (with a special administrative status, in which its residents are technically simultaneously citizens of both Sudan and South Sudan). Abyei is responsible for about a quarter of Sudan’s total crude oil output (Enough Project, 2013).
While oil drives resource-related conflict in Nigeria, Sudan, and South Sudan, resource-related conflict in DR-Congo is primarily fueled by mining (e.g., diamonds, cobalt). DR-Congo is estimated to have about $24 trillion worth of untapped deposits of raw mineral ores, including the world’s largest reserves of cobalt (Morgan, 2009). The majority of this type of conflict in DR-Congo is battles, primarily between government forces and rebel groups over gaining control of mines.
Somalia sees a high number of directly-resource-related conflicts, largely driven by battles between clan militias over access to and control of land and water resources. In a region with chronically high temperatures year-round and limited/irregular rainfall, these natural resources become even more valuable.

In addition to battles and violence against civilians, directly-resource-related conflict also takes the form of riots and protests in Africa. Riots and protests related to resources have been increasing in recent years (Figure 1). Nigeria and, more recently, Libya exhibit the largest proportion of these events (Figure 4).  Not surprisingly, as Nigeria is the continent’s largest oil producer, and Libya is home to Africa’s largest oil reserves, resource-related riots and protests in these countries are primarily centered on the oil industry. For example, these riots and protests include closing the offices of locally-based oil companies: calling for increased transparency, higher salaries, and better work practices.
Berman et al. (2014) find extractive industries (specifically mining) in Africa to have a large impact on the likelihood of conflict in the region, influencing the diffusion of violence over both space and time. With low enforcement of extractive/mining industries in Africa, corruption surrounding these industries is high. Hence, though the region boasts a number of extremely resource-rich countries, many are still extremely poor and underdeveloped (ISS, May 14, 2013). Furthermore, vying for control of these resources can fuel conflict, which can have a further detrimental effect on development in the region; Basedau and Wegenast (2009) find that a state with high levels of valuable resources experiencing conflict spends little revenue on distributional policies.  Earlier this month, a UN panel of experts announced that UN peacekeepers should monitor mining sites in the Central African Republic to clamp down on the illicit trade of gold and diamonds, which are being used to finance conflict in the country (Reuters, November 5, 2014). With resource-related conflict and unrest on the rise, this is becoming an even more pressing issue in Africa.