Terrorism: A review of differences in definition 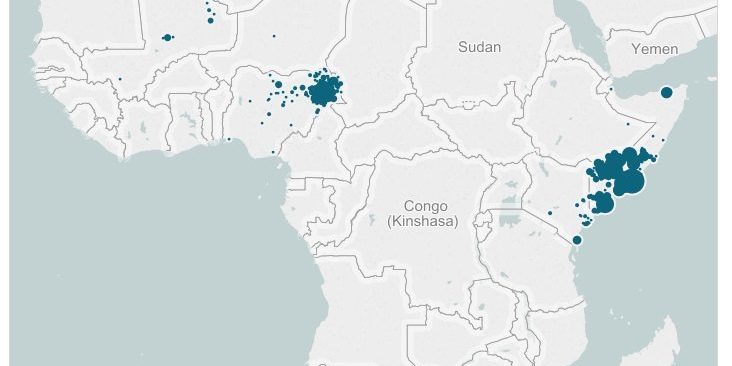 The existence of multiple, contrasting and even contradictory definitions and conceptualisations of terrorism in policy, legal frameworks and academic research is well-documented. The plethora of competing legal definitions has been likened to the Bermuda Triangle (Dedeoglu, 2003), and attempts to develop consensus around a single one, to ‘the quest for the Holy Grail’ (Levitt, 1986). A review essay seeking to revisit the definitional impasse in 2001 had the modest goal of determining how to ‘at least know it when it is seen in the coming decades.’ (Cooper, 2001, p. 881).
However, there are numerous reasons to review the phenomenon at the present time, among them, the fact that activity designated – either legally, by policymakers or by scholars – as terrorism is undoubtedly increasing on the African continent, at a time when fine-grained and disaggregated data on the nature and location of these attacks can cast light not only on the competing operational and legal definitions, but on their implications. Geddes (1990) wrote an influential paper on ‘how the cases you choose affect the answers you get’ – this blog post forms part of a series by ACLED researchers exploring how the data, and sometimes names, you use affects those answers as well. Previous research has found discrepancies in the recorded levels of terrorist activity across datasets which seek to capture this form of violence exclusively, owing to differences in the way datasets conceptualise ‘transnational’ activity, and different underlying definitions of terrorism (Sheehan, 2012). Building on this analysis, this post will analyse the same data using contrasting definitions and highlight the implications of different definitions and uses of the term on our understanding of the geography, scale and nature of violence on the African continent.
There are three key components to a definition of terrorism that shape analysis: the perpetrators, the victims, and the audience (Sandler, 2014). With regards to perpetrators, definitions differ in whether or not they include state terrorism, or sub-national actors only, and whether indirect state-sponsored violence can qualify as terrorism. With regards to victims, researchers, policy makers and legal definitions some definitions consider only attacks on noncombatants to constitute terrorism (Enders, Sandler and Gaibulloev, 2011, p. 321), or whether this is ‘generally’ a feature of terrorism (RAND, 2014); some include context-dependent attacks on military, for example, armed forces who are not actively engaged in combat, or during peacetime (as overviewed in Sandler, 2014); while a larger share of the literature appears to accept that terrorism can involve attacks on all targets, regardless of combat status (Schmid and Jongman, 2005). Both of the aforementioned components can be controlled for in the ACLED dataset: an analysis can filter out state or other official actors, and include or exclude attacks on combatants (battles).
The third component of the definition – audience – is more difficult to analyse. There is widespread agreement that terrorism involves a psychological dimension, emphasising either its role as ‘anxiety-inspiring’ and fear-inducing  (Schmid and Jongman, 2005, p. 25; Hoffman, 2006, p. 40) or its targeting of direct victims as message carriers to a wider, indirect audience (Sandler, 2014). Conflict event data are not typically structured in such a way as to facilitate a systematic determination of this: it may be that psychological intimidation is a function of high-intensity violence, and therefore events with no or low reported fatalities could be excluded as a proxy. However, this would exclude events which involved no (initial) fatalities, such as the kidnapping of 200 girls in Chibok, by Boko Haram; and events in which targeted violence with a small number of resulting fatalities – such as assassinations – had the same psychological effect. For this reason, this third element of the definition will not be explored in this piece.
A final, and legalistic, approach to defining terrorism is to use a list of officially designated Foreign Terrorist Organizations (FTOs), for instance such as that produced by the US Department of State (http://www.state.gov/j/ct/rls/other/des/123085.htm). Of these, the 59 listed organisations, there are currently 11 designated on the African continent. This list will serve as a reference point for comparison in this post, but a similar analysis contrasting different countries’ and institutions’ official designations would also likely reveal systematic variations.
The first implication of selecting one definition or another is that it defines the perceived geography of violent conflict in Africa in 2014. A visualisation of the location of all violent activity[1] by US officially designated FTOs reveals two broad arcs – the first, stretching across the northern-most (and more urban) regions of the North-African states of Algeria, Tunisia, Libya and Egypt; and the second, stretching from northern Mali through northern Nigeria, and across to Kenya and Somalia (see Figure 1).

A contrasting visualisation, based on a definition of terrorism as non-state actors targeting using violence for political purposes, reveals a different distribution of violence altogether (see Figure 2)[2]. This definition dramatically widens the geographic scope of violence, both continentally and within individual affected states. For instance, unrest in Sudan, Central African Republic and DRC is much more dominant in Figure 2. Furthermore, the scope of violence within states also affected by officially designated FTOs is also much more expansive than Figure 1 alone depicted. Analysing all violent activity by non-state actors in these countries reveals much more about the domestic conflict environment within which groups such as Boko Haram and Al Shabaab operate: both are active in countries with high levels of non-FTO violence. This national political context is obscured by a review of the actions of FTOs alone.

A third visualisation narrows our definition further still, with a focus only on the targeting of non-combatants by non-state actors (see Figure 3). As VAC is included in Figure 2, there is a some expected level of overlap between these two figures. However, the differences also reveal important features about the nature and forms of violence, and the use and implications of these different definitions: among the largest discrepancies, in terms of number of events, between these two definitions, are those evident in Libya, Somalia and Mali, three countries which are heavily affected by violence officially designated as ‘terrorist.’ Here, battles constitute on average 73% of all violence by non-state rebels and militias. By contrast, in Nigeria, battles make up only 40% of all violent activity by such groups.

Clearly, there is a significant difference between those states in which officially designated FTOs are engaged in a conflict with armed forces, and those in which they are engaged primarily in attacks on civilians. Some definitions would not include the activity of those in the former within their analysis at all: only their violence against non-combatants would meet the threshold of terrorism.
If we compare the actions of officially designated FTOs with those of other rebel and militia groups in the most active countries of operation, while the absolute levels of violence by FTOs is higher in some cases (namely Somalia, Nigeria and Cameroon), the proportional breakdown of violence by type shows that other violent actors are as likely if not more so to target civilians as officially designated terrorists (see Figure 4).

The conceptualisation of terrorist organisations as ones which primarily attack civilian populations in an attempt to spread fear and terror does not appear fit the patterns evident in Africa. Furthermore, the recorded patters of activity underscore that the ways in which terms and concepts are defined determines and shapes the outcome of research questions. Where a narrow definition of terrorism focuses on the targeting of noncombatants, a wider range of groups in all countries currently affected by terrorist violence in Africa should be considered and their actions analysed in terms of additional criteria such as the intentional spread of fear among a wider population. But this narrower definition would in turn exclude and obscure the full range of violence by individual non-state groups, whose main activity involves conflict with security forces. This raises questions on the validity and usefulness of terrorism as a concept when a large (and in many cases, the largest) share of the violence carried out by such groups targets state forces in violence that much more closely resembles conventional dyadic conflict. Lastly, a reliance on official categorisations may address issues of definitional inconsistency across individual researchers or institutions, but the picture of violence it projects is one which does not reflect the vulnerability of civilians to a wide range of threats and use of violence across the continent.