From December 2014 to February 2015, there was a significant lull in violence on all fronts in Libya. This is concurrent with a dramatic decrease in Libya Dawn (Fajr Libya) activity, especially from the Misratan battalions (see Figure 1).

Whilst tensions were stoked at the beginning of May between Libya Dawn forces and Operation Dignity in the West of Libya, the second half of May witnessed a shift in the locality of violence, predominantly concentrated in the central city of Sirte and eastern city of Benghazi. Consequently, the Libyan Dawn alliance played a lesser role in violent conflict throughout May, reflected through several reconciliatory efforts and prisoner swaps between groups in Zintan, Misrata and Gharyan. Counterintuitively, the agents driving these peaceful exchanges are the revolutionary brigades themselves, rather than the respective parliaments and legislatures to which they are aligned. The General National Congress expressed dissatisfaction with the lack of coordination between the fighting groups, municipalities and the legislative authorities in reaching the terms of agreement (The Libya Observer, 23 May 2015). Militia groups continue to hold significant power over their respective allied governments, taking their own course of action as the UNSMIL political process drags on with little progress made.
Similar sentiment was further expressed by the House of Representatives (HoR) that declared that any political-business arrangements established currently would be invalid under the transitional government. However, the negative reception towards the UN & Bernadino Leon’s third draft peace agreement – which would almost certainly curtail the influence of Islamist groups under Libya Dawn – has created a further impasse in reaching a resolution.
Dynamics on the ground largely reflect this wider stalemate within Libya, as the Libya National Army (LNA) continues to battle Ansar al-Sharia and groups under the Benghazi Revolutionaries Shura Council (BRSC) who are largely concentrated in the districts of Leithi, Sabri and Garyounis. Despite aerial bombardment by the Libya National Army on Ansar positions, throughout May the Islamist groups appeared to have gained the upper hand with a substantially higher proportion of casualties reported from the army side. On the 12 May 2015, groups affiliated with the Islamic State (IS) appeared to have crept into Benghazi, joining the fight against the Libya National Army and General Khalifah Haftar’s forces. Whether they are fighting alongside Ansar al-Sharia militants is unclear, however the humanitarian impact on the civilian populations within Benghazi is turning catastrophic. Libyan citizens who have remained within the city have been exposed to heightened rocket and RPG attacks and reports from residents suggests that certain districts have started to be deliberately targeted after refusing to back the fighting Islamist groups under the BRSC (Libya Herald, 26 April 2015). Whether the Islamic State redoubles its efforts in Benghazi remains to be seen, but for the next few weeks it is likely to solidify its presence in Sirte and Derna where it has established control over government institutions, most recently the Gardabiya airbase and the Great Man-Made River Project to the east of Sirte.
The growing manifestation of IS and the spiralling complexity it is adding to the Libyan situation (see Figure 2) could prove to be the pivotal mechanism for more concrete collaboration between the divided forces in Libya. On the 21 May 2015 for the first time since fighting began in May 2014, a joint security operation was conducted by Misrata’s 166 Battalion and forces of the internationally recognised parliament against the Islamic State in Sirte. To date, the Misratan bloc has been the most active group in confrontations with IS militants, where Islamic State advances on Misratan positions have seen clashes erupt in the town of Nawfaliyah and suicide attacks on the outskirts of Misrata itself. If sustained cooperation between Misrata and the Libyan National Army to combat the IS threat were carved out, it would pull the Misratan bloc further away from the ideologically hardline GNC, who are reluctant to concede power in the UN Resolution. 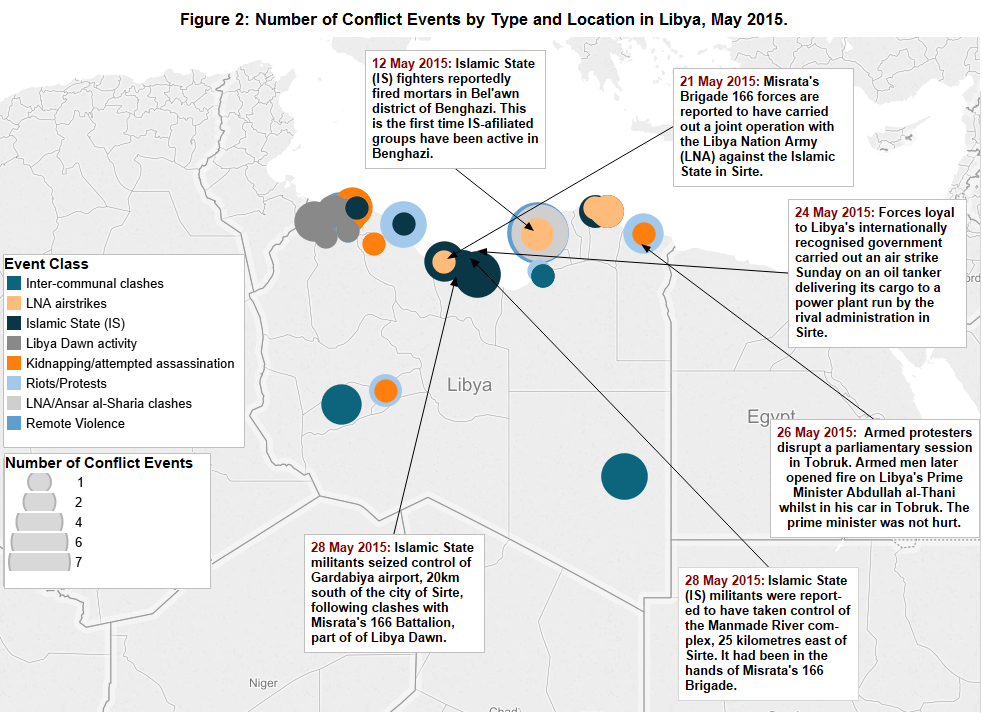 This would act to destabilise relations between fighting groups and the GNC camp. How this forecast plays out in the coming weeks is yet to be seen, but intentions to protect the economic and political prowess held by the city of Misrata is likely to be a guiding factor in this decision. Steps towards this outcome are already underway where recent weeks of fighting have reportedly left the Misratan forces stretched thin, divided between multiple battlefronts in both the east, west and central Libya.
Misratan forces have stepped down in confrontations with the Libyan Army, and taken decisive steps towards forging an agreement with Wersheffana to withdraw from Zawia and Janzour (Mozayix, 28 April 2015), with other groups under the Libya Dawn umbrella taking a more active role in early May. Furthermore, Operation Sunrise forces withdrew from fighting in Bin Jawad to secure oil installations and agreed a ceasefire with the Petroleum Facilities Guards aligned with the Tobruk-based government in order to redeploy troops for an offensive against IS around Sirte.
Grounds for stability could be forged through this battlefield alliance although the resilience of this brokered partnership to combat a common enemy may be harder to translate into a long-term transitional solution through institutional means. This is especially the case once the threat subsides and old tensions return to the fore. The GNC administrations unease at these political settlements highlights this potential faultline.
As Misrata moves from the weapon to the mouthpiece of the GNC – a move unwelcomed by GNC members- it is the response of the opposition that may uncover the real underlying dynamics in the Libyan conflict. In any case, the response of General Khalifah Haftar is worthy of attention, who has staunchly refused to recognise the camp as anything other than a radical Islamist coalition. The House of Representatives has also had to contend with its own political infighting this month, when armed protesters surrounded a parliament session in Tobruk demanding the resignation of Prime Minister Abdullah Al-Thinni, and an “attempted assassination” attempt on Al-Thinni the same day. Whilst uncertainty surrounds these events, it has been speculated that Haftar orchestrated the event to undermine the legitimacy of the PM, in tandem with business and media elites.