The Exportation of Ugandan Rebel Violence: A Comparison of the Allied Democratic Forces and Lord’s Resistance Army 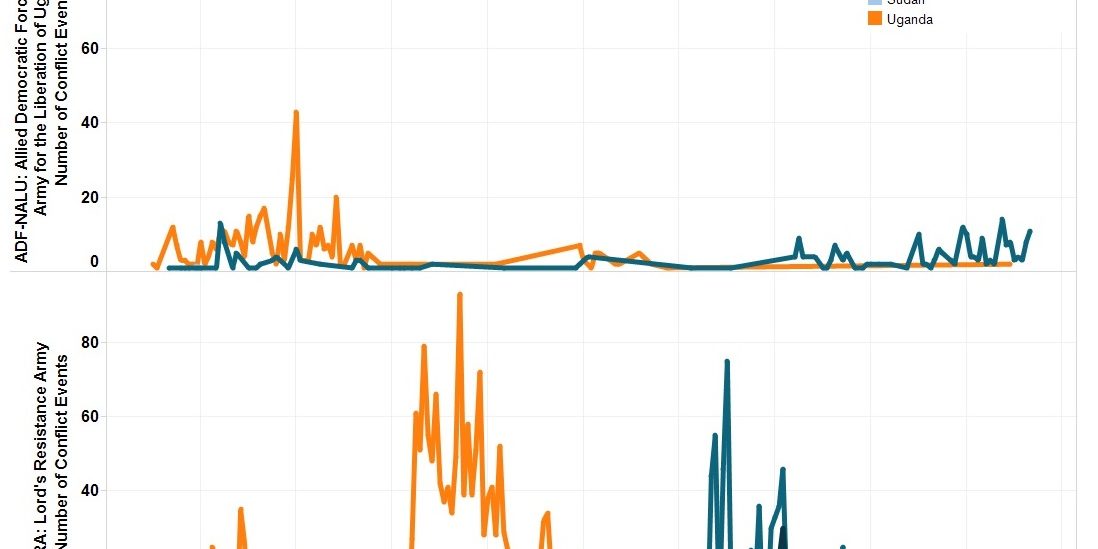 In the past few weeks, the Alliance of Democratic Forces (ADF, formerly the Alliance of Democratic Forces – National Army for the Liberation of Uganda, ADF-NALU) has experienced several setbacks. Dozens of its soldiers have been killed or captured, including senior personnel, while its leader, Jamil Mukulu, was arrested in Tanzania at the end of April (Wall Street Journal, 2015). These developments draw attention to the dynamics of armed Ugandan non-state actors in the wider Central African region.
Numerous rebel groups have been active in Uganda over the past twenty years. Among the different groups, ADF-NALU and the Lord Resistance Army (LRA) are the most prominent. In considering the history of these groups, the late 1990s represents the most intense period of conflict on record involving ADF-NALU (with an average of 92 events per year on average between 1997-200), while the subsequent 2002-2007 represents the most intense period of conflict involving the LRA (with an average of 362 events per year on average). In response, these groups have been targeted by several international operations, which have attempted to reduce the threat they pose. The 2005 Congolese-UN’s North Night Final operation weakened the ADF-NALU alliance, before several NALU leaders and combatants surrendered in 2007 (International Crisis Group, 2012). By contrast, the 2008 multilateral Operation Lightning Thunder failed to defeat LRA in Garamba National Park-DR-Congo, and the group continued to engage in violence in DR-Congo, Sudan, Central African Republic (CAR) and South Sudan. The LRA have not been active in Uganda since early 2007 (International Crisis Group, 2010). While the security situation has progressively improved in Uganda, the effect of this has been to export violence and instability to neighbouring countries.
As Figure 1 illustrates, despite their defeat in Uganda, the LRA and ADF have not been neutralised. Instead, they have continued to engage in violence in neighboring areas, mainly in north-eastern DR-Congo and, in the case of the LRA, in south-eastern CAR. Furthermore, they are not only sheltering or hiding in these wider regional arenas: the number of events in which they are engaged remains significant. While levels of violence involving the LRA have declined significantly since 2009-2010, the years 2013 and 2014 both represented periods of spikes in violence levels. Moreover, ADF forces have actually increased their general activity level since 2007, suggesting a different trajectory for the group. 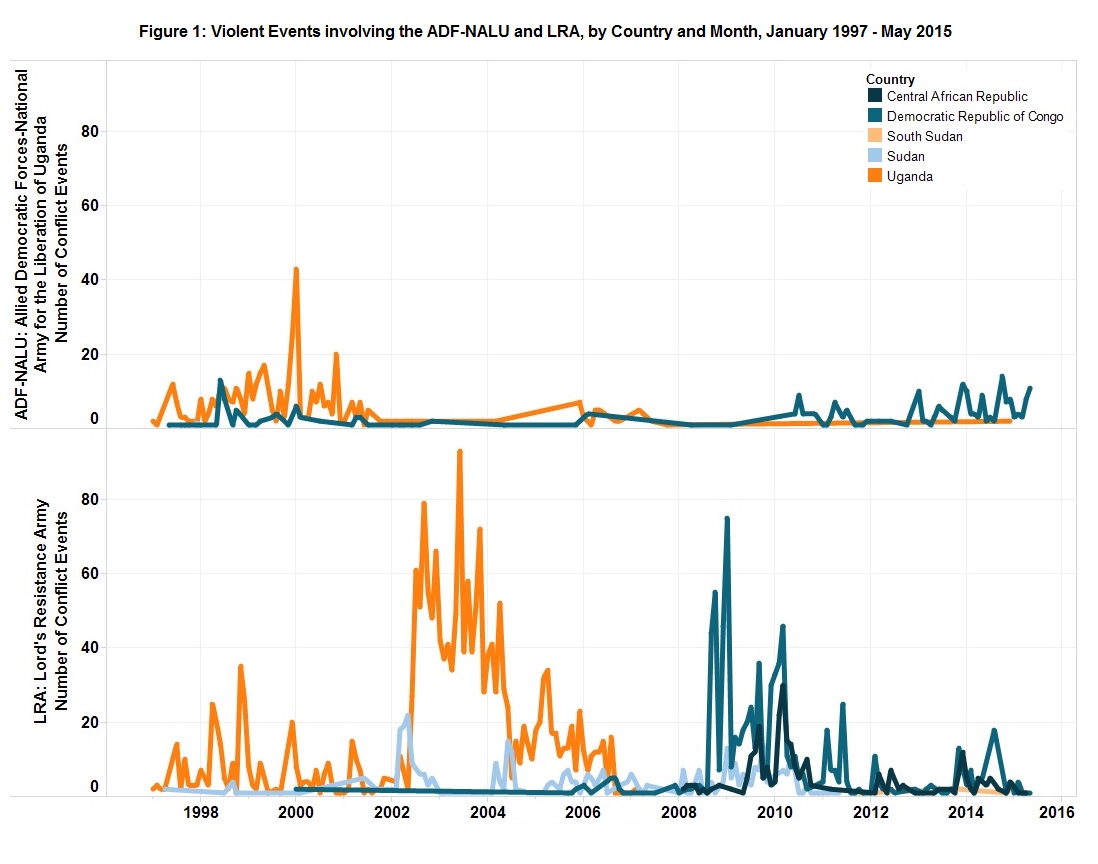 Furthermore, both groups retain considerable operational capacity, with particular implications for the security and vulnerability of civilians in conflict areas: for instance, in December 2013, suspected ADF rebels killed 21 villagers in Beni, North-Kivu (Jeune Afrique, 2013), while the LRA continues to carry out raids and abductions throughout the province (UNHCR, 2015). This illustrates a broader trend in violence dynamics among these two groups, reflected in their strategic use of violence against specific targets. For instance, while 42% of LRA violence in Uganda was targeted against civilians, in DR-Congo, anti-civilian violence constitutes more than two-thirds (69%) of all recorded activity. Meanwhile, while levels of violence against civilians involving the ADF have fallen slightly in its move from Uganda to DR-Congo (from 37% of activity to 33%), the proportion of fatalities resulting from anti-civilian violence has increased (from 40 to 43%) suggesting an intensification of anti-civilian violence by the group. When neighbouring regional countries are combined into a single category, the evolution is even more stark (see Figure 2). 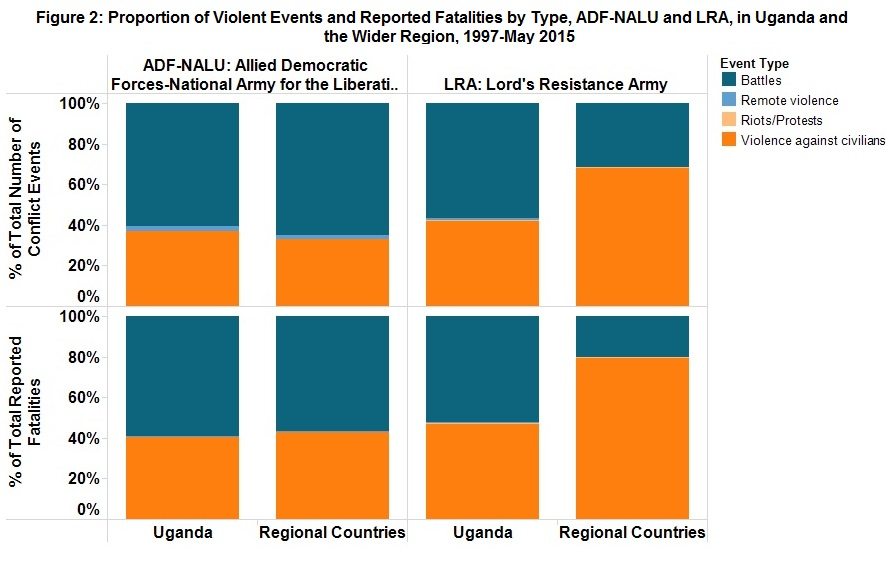 These patterns reveal two dynamics: first, both groups are increasingly regionalized: in spite of their original bases of operation being in Uganda, both groups remain primarily active in DR-Congo; while several LRA sub-groups are operating in CAR and South Sudan. One could explain this shift by arguing that both these groups no longer have clear national political incentives and therefore aim to operate regionally merely to survive (Scorgie, 2011). Second, this regionalization has been accompanied by a shift in the levels, intensity and targeting of violence by both groups. While both exhibit a high degree of volatility in their activity, and a general decline since the peak of their violence several years ago, they remain active on a scale that has grave implications for stability and civilian protection in the region.