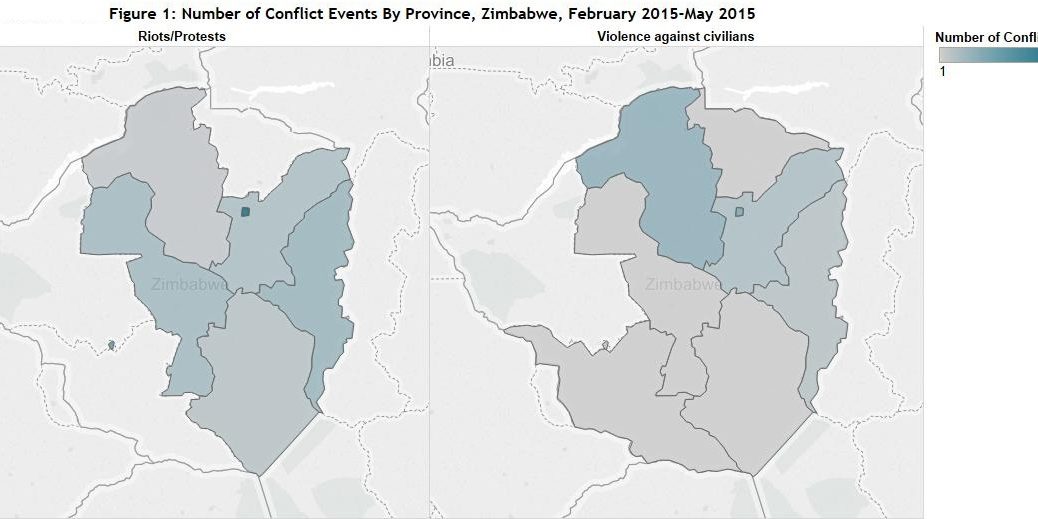 Conflict levels decreased to below average levels in May. This decline follows a spike in violence in April which saw levels of political violence not witnessed since the expulsion of Joice Mujuru and her supporters from the Zimbabwe African National Union-Patriotic Front (ZANU-PF) in December and January. The cause of the spike in violence in April is the upcoming by-elections due to take place on the 10th of June. Seats have been left vacant due to factionalism in Morgan Tsvangirai’s Movement for Democratic Change (MDC-T). In March, after writing to the Speaker of the National Assembly and President of the Senate, Tsvangirai had 21 legislators expelled from parliament for aligning with the rival Movement for Democratic Change Renewal faction (MDC-R) (Langa, 2015).
The resulting electoral contest has been the cause of significant political violence. However, because of the MDC-T’s policy of not contesting elections until the party’s demanded electoral reforms are implemented, political violence has been primarily between different factions internal to both MDC and ZANU-PF, and between current and former insiders in the two parties.
Outside of Harare, Mashonaland West has had the highest level of activity (see figure 1). High incidence of violence against civilians is due to the by-election due to take place in constituency of Hurungwe West which is currently contested between ZANU-PF and Temba Mliswa, the former ZANU-PF provincial chairman who was ousted during the anti-Mujuru purge, who is running as an independent. ZANU-PF youth have been active in the area and the use of violence has been instrumental in motivating the population to vote for the ZANU-PF candidate Keith Guzah (Zimbabwe News, 2015). Traditional authority figures accused of supporting Mliswa have been abducted and tortured by ZANU-PF activists.

The incidence of political violence has also been high in Harare. The prior dominance of the various MDC factions in the capital means that many of wards in Harare are vacant and open for contest, motivating the continued harassment of political opponents by ZANU-PF cadres. The high level of activity cannot be entirely attributed to the by-elections as the disappearance of pro-democracy activist Itai Dzamara and unrest among prisoners in Chikurubi prison has led to a high rate of riots and protests in Harare (Waza Online, 2015; Nehanda Radio, 2015), which in turn has provoked a violent response by the security services.
The issue of the by-elections has also driven a split within the MDC-T. Tsvangirai remains adamant about boycotting the by-elections while his deputy Thokozani Khupe is allegedly pushing for MDC-T to electorally contest (Chidza, 2015). This schism has resulted in incidences of intra-MDC-T violence with MDC-T youth aligned with Khupe and Tsvangirai clashing in Bulawayo and Pelandaba.
The drop in political violence between April and May could be due to the consolidation of ZANU-PF control in contested regions, yet this decline could be reversed on June the 10th when the electorate cast their vote.