Homosexuality and Discrimination in Africa

While many celebrate the US Supreme Court ruling late last week to legalize same-sex marriage across the US as a victory for the gay-rights movement and equality (NYTimes, 26, June 2015), gay and lesbian people across many countries in Africa continue to experience discrimination and attacks as a result of their sexual orientation, a trend which has been increasing in recent years.
By searching for conflict events within the ACLED dataset related to homosexuality, one can gain an understanding of discriminatory violence and when and where it is used. Civilian targeting makes up a large portion of these events in which individuals deemed to be homosexual and/or thought to be supporting the gay cause are targeted, attacked, and often killed. Riots and protests have also been increasing in recent years; these involve both gay-rights groups advocating for equality as well as anti-gay groups protesting any perceived gains by the gay community. Figure 1 maps the locations of these instances of violence against civilians, as well as riots and protests surrounding this cause, across the continent.

The majority of these events, as well as fatalities stemming from these events, occur in South Africa and Uganda – two countries with markedly different laws towards LGBT rights. Same-sex marriage was legalized in South Africa in 2006 – making the country the fifth in the world to do as such – and it remains the only country in Africa where same-sex marriage is legal. However, despite this, “the traditional monarch of the Zulu people, who account for about one-fifth of the country’s population, maintains that homosexuality is morally wrong” (Pew Research Center, 26 June 2015). As a result, social stigma and homophobic violence – including ‘corrective rape’ to “‘cure’ lesbian women of their homosexuality” (Telegraph, 21 May 2015) – remain high in South Africa. While there are few events of this nature reported prior to 2012, since then the number of instances of these events has been increasing, including assaults and rapes of homosexual individuals as well as numerous murders across the country.
While most homophobic violence seen in South Africa results from hate crimes and the targeting of individuals by gangs and unidentified armed groups, in Uganda, the state is complicit in violence. Early last year, the Uganda Anti-Homosexuality Act was signed into law by the president. The bill – in earlier iterations referred to as the “Kill the Gays Bill” in the media due to the mandated death penalty for gays who were deemed “repeat offenders”[1] (Reuters, 13 May 2011) – further criminalizes same-sex relations in Uganda domestically and includes provisions for Ugandans engaging in such relations outside of Uganda, claiming they may be extradited back to Uganda for punishment. As a result of state views towards homosexuals, it is unsurprising that there are reports of police arresting, detaining, and torturing gay rights activists. Violence against homosexuals in Uganda has also been increasing in recent years. There are reports of gay men being attacked and hospitalized, lesbian women being beaten, and gay individuals and activists being murdered.
With gay rights and the movement for equality gaining increased traction around the world in recent years, tensions around the cause have been heightened in Africa. Figure 2 shows the increased number of instances of this type of violence since 2012 – with higher than average levels reported consistently since then. Despite the reported increase, it can be assumed that this violence is likely even higher than reported as social stigmas surrounding homosexuality, as well as legal repercussions for being ‘outed’ as homosexual, create barriers for victims to come forward. As the movement continues to gain ground globally, further violence can likely be expected as tensions accumulate. 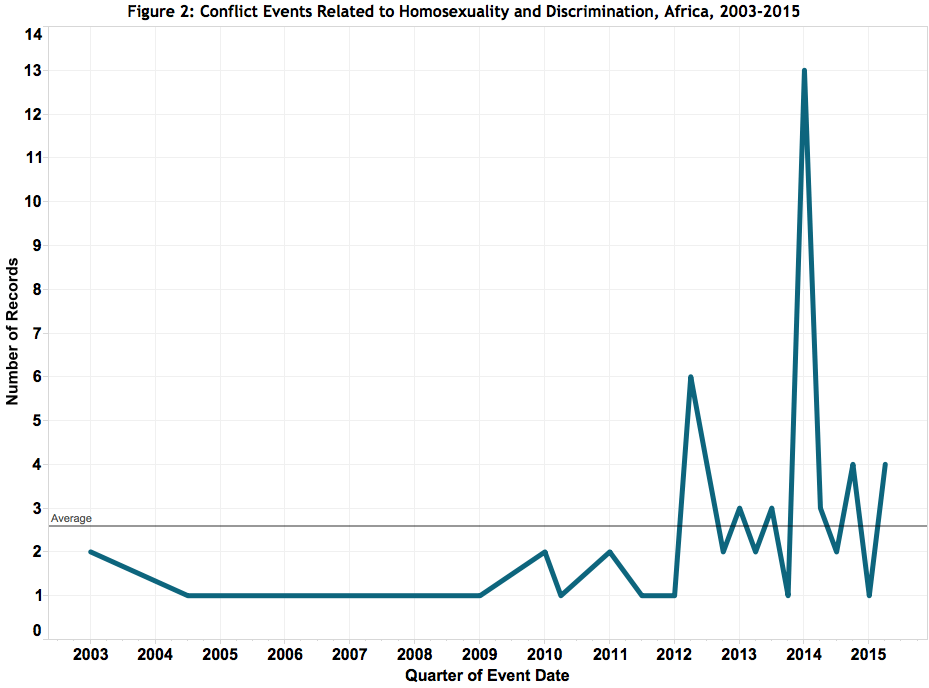 [1] The death penalty clause has since been struck from the bill.