Peacekeeping and Violence Against Civilians 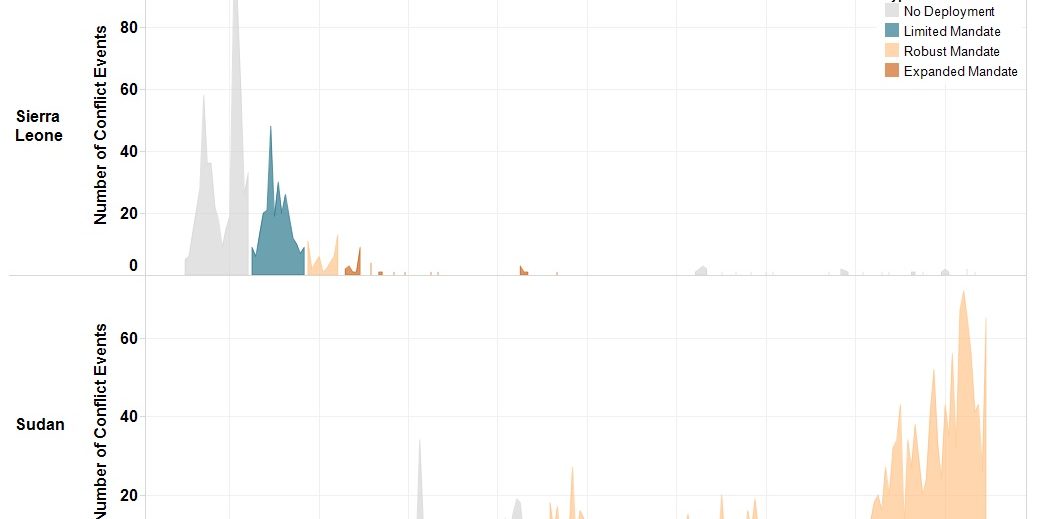 Up until the end of the 1990’s, United Nations (UN) peacekeeping (PK) missions did not necessarily specify the protection of civilians (PoC) in their mandate under ‘immediate threats of physical violence’ (Holt et al., 2009). Nor did their mandates clearly permit the “use of force” to fulfil their mission. However, failures of peacekeeping in the 1990s, associated with the genocide in Rwanda in 1994 and the Srebrenica massacre a year later, pushed the UN to revise their approach. The Brahimi Report (UN, 2000) suggested essential reforms for subsequent PK deployments. It proposed the need for peacekeepers to be allowed to fulfil their mandate using “all necessary means.” Some mandates were subsequently adjusted, explicitly naming and targeting the main security threat, surpassing the previous neutrality of previous peacekeeping missions. Moreover, most of the mandates from then on included PoC. Investigating this evolution over the 1997-2014 period, this piece addresses whether PK missions have subsequently been effective at reducing violence against civilians (VAC), and whether the shift in mandates has resulted in a shift in the frequency and levels of VAC.
Table 1 presents a categorisation of PK operations deployed from 1997 to 2014 according to their mandates. A limited mandate is defined as one which restricts the use of force except in cases of self-defence. It is characterised by PK operations with an observer mandate, or with a primarily monitoring (border or cease-fire) function. Examples include the United Nations Observer Mission in Angola (MONUA). A robust mandate is defined as one which permits the use of “all means necessary” to fulfill the mandate or parts thereof. It is typically characterised by higher levels of troops compared to limited mandate missions. Examples include the United Nations Operation in Burundi (ONUB). An expanded mandate is defined as one in which a mission is tasked with targeting a specific armed group. It is characterised by the use of force, alongside a governmental ally, against an enemy explicitly named within the mandate. Examples include the African Union Mission in Somalia (AMISOM) with Al Shabaab in Somalia.

Table 1: Classification of PK missions, based on the content of their mandate concerning the ‘use of force’ and ‘protection of civilians’

Although the period 1997-2014 witnessed an overall increase in levels of VAC (from 29 events in January 1997 to a maximum of 303 in January 2014), the relative share of VAC as a proportion of total violence levels remained consistent over this time, constituting roughly one-third of all violent events on average. However, this overall pattern obscures some variation and volatility in specific time periods and contexts. For instance, the Sierra Leonean crisis provoked an increase in the share of VAC from the first quarter of 1997 (when anti-civilian violence constituted one-third of all events in the dataset) to the second quarter of 1998 (when it made up half of all violent events across the continent). Disaggregated analysis allows us to assess whether PK deployments succeeded in reducing VAC in specific contexts.
Sierra Leone experienced high levels of VAC during its conflict (1991-2002, with PK deployment from July 1998 until December 2005), with peaks of more than 50 events per month in June 1997 and February-March 1998 (see Figure 1). A ‘limited’ PK mission, the United Nations Observer Mission in Sierra Leone (UNMOSIL), was deployed in July 1998. However, as an observer mission, it was poorly equipped with troops and equipment. In the months following its deployment, Sierra Leone experienced high levels of VAC with 48 events in December 1998, and an average of 17.9 events per month during UNMOSIL’s lifetime. 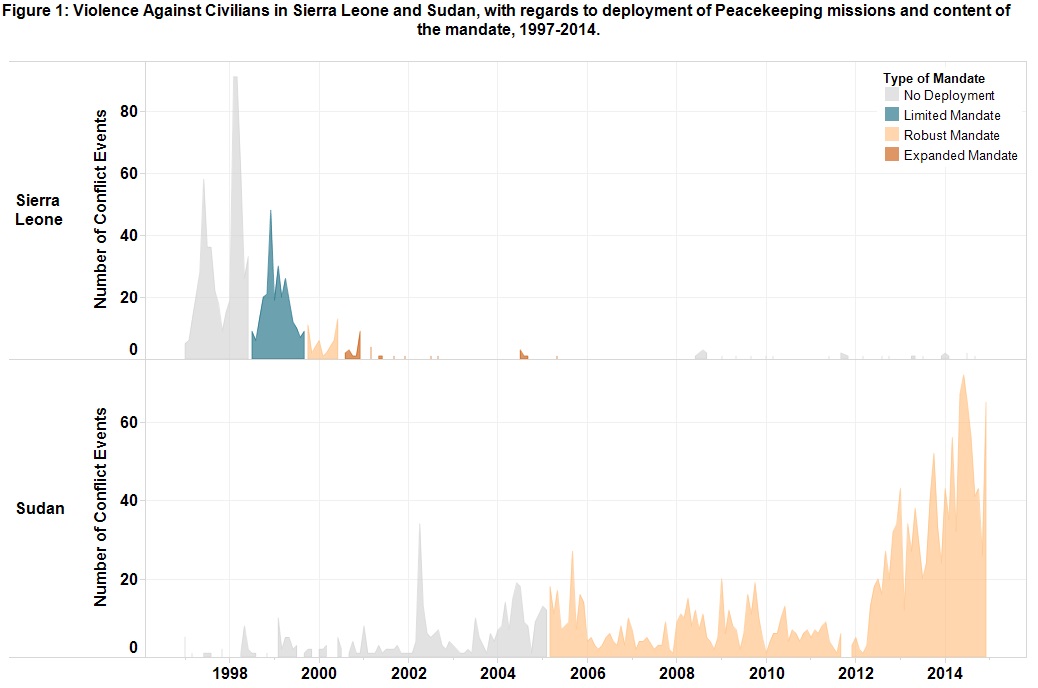 To address this, the UN Security Council (UNSC) approved a robust follow-up mission, the United Nations Mission in Sierra Leone (UNAMSIL), in November 1999. Progressively increasing the level of troops during the first months of its deployment (11,000 troops in February 2000 compared to 6,000 in October 1999), and adjusting its mandate (notably to include securing key areas) (Dwan, 2002) seems to have reduced the level of VAC (Hultman et al., 2013). On average, during UNAMSIL’s deployment, there were 2.1 events of VAC per month (more than 7 times less than the UNMOSIL’s average rate). However, as Seybolt suggests, the legitimacy of UNAMSIL’s success remains questionable. Indeed, the intervention of well-equipped British troops outside of UN-command, in parallel with an end of Liberian funding to Revolutionary United Front (RUF) rebels, modified the balance of power (Seybolt, 2014) and may have independently lowered the imperative for civilian attacks.
In Sudan, despite successive peacekeeping deployments, levels of VAC have continued to increase. This is particularly apparent in Darfur: during the first 6 months of the United Nations–African Union Mission in Darfur (UNAMID) deployment (2007-present), there were on average 2.5 events of anti-civilian violence per month; whereas during the last 6 months of 2014, civilians experienced 42.3 events on average per month. VAC as a proportion of total violence has also seen an increase of almost double (constituting 62% of all 2014 violent events in Darfur compared to 37.3% over the first year of deployment). This may be partly explained by the fact that the UNAMID mandate was severely restricted: Sudanese president al-Bashir refused a UN-led operation. Requiring the consent of the host state to deploy, UNSC agreed to a light hybrid mission (AU/UN). Therefore, the mission may not in practice meet the conditions of a robust mission.
The UNAMID mandate faces an issue in ensuring it effectively protects civilians. Technically, its ability to guarantee PoC is restricted by a use of force “within its capability and areas of deployment, without prejudice to the responsibility of the Government of the Sudan” (UN, 2007). Yet, since July 2007, and the deployment of UNAMID troops, Sudan’s security forces have been involved in 12.5% of VAC events in Darfur. Without including pro-government militia (22.5%) and paramilitary Rapid Support Forces (4.5%) this might already suggest that an increase of VAC is facilitated by the mission’s limited mandate. Moreover, as Sloan suggests, UNAMID–as well as several other UN PK missions–face a lack of required troops, equipment and leadership, which undermine potential effectiveness (Sloan, 2014).

Specific Targets
In several situations, UNSC had to adjust mandates in order to be more effective. AMISOM, UNAMSIL and the United Nations Organization Stabilization Mission in the Democratic Republic of the Congo (MONUSCO) mandates have evolved to deter and fight respectively Al Shabaab, the RUF rebels in Sierra Leone and several armed groups in Democratic Republic of Congo. In Mali, the 2013 deployed United Nations Multidimensional Integrated Stabilization Mission in Mali (MINUSMA) was directly mandated to work in close cooperation with other enforcement missions (the French Serval mission for instance) to deter threats from AQIM, MUJAO and Ansar Dine. Do new measures which specifically target an identified threat significantly reduce levels of VAC in these contexts?
In February 2012, AMISOM’s mandate explicitly named Al Shabaab as the main threat (UN, 2012) to be targeted by peacekeepers. As Figure 2 shows, while during the robust mandate period, levels of VAC by Al Shabaab were on average 2.7 events per month from January 2010 to January 2012; these events increased to 10.5 per month since the expansion of the mandate, and the naming of Al Shabaab of a specific threat. This includes the period from May 2013 onwards, when the UN mandated a specific, mission-wide PoC (Williams, 2013). AMISOM’s tactical strategy may in part explain its failure to curb VAC. According to Williams, although AMISOM is mandated to support the Somalian National Army, the strategy employed involving large and concentrated battalions, instead of small units spread all over the territory, does not fit with Al Shabaab strategy. Indeed, since the end of 2012, VAC is no longer concentrated in and around Mogadishu, but spread all over the south and central regions of Somalia. Deploying small and quick units might be a solution to more effectively reduce levels of VAC (Williams, 2014). 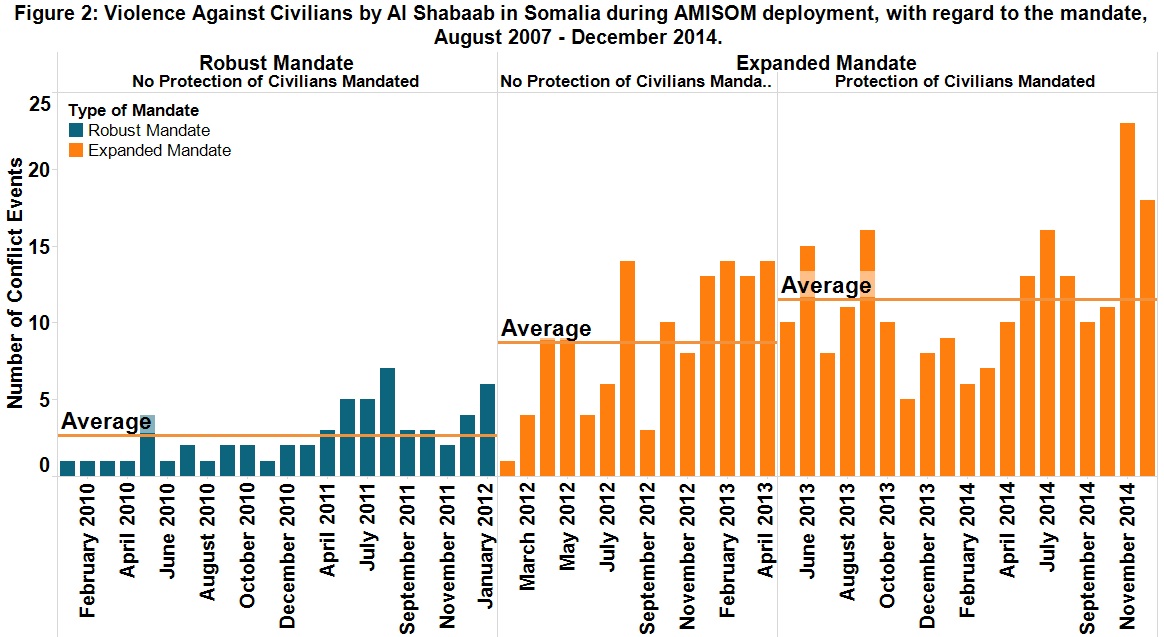 By contrast, MONUSCO’s expanded mandate has corresponded to an overall reduction in the levels of VAC, and suggests a success strategy. MONUSCO’s expanded mandate was built around the Force Intervention Brigade (FIB) deployed in March 2013 to fight the M23, ADF-NALU, LRA, FDLR and Mayi Mayi militias, alongside DR-Congo government forces. Prior to this measure, as Figure 3 shows, levels of VAC from the targeted groups during MONUSCO deployment were 19.1 events per month on average. Since March 2013, levels of VAC averaged 13.6 events per month. Despite an increase of VAC by ADF and Mayi Mayi militias, this use of force beyond the traditional conception of peacekeeping has allowed peacekeepers to significantly reduce the absolute level of anti-civilian violence. As noted by Lamiot, MONUSCO’s success at deterring selected groups in DR-Congo and reducing VAC may be attributed to the increasing number of MONUSCO troops; weaknesses of rebels groups, especially when external support is lacking; more traditional warfare strategies by rebel groups, which render these groups easier to target than more innovative strategies, such as terror tactics; and certain groups allying with government forces (Lamiot, 2015). This case has some similarities with Sierra Leone case, where the RUF lost support from Liberian government, alongside an increase of peacekeeping troops. 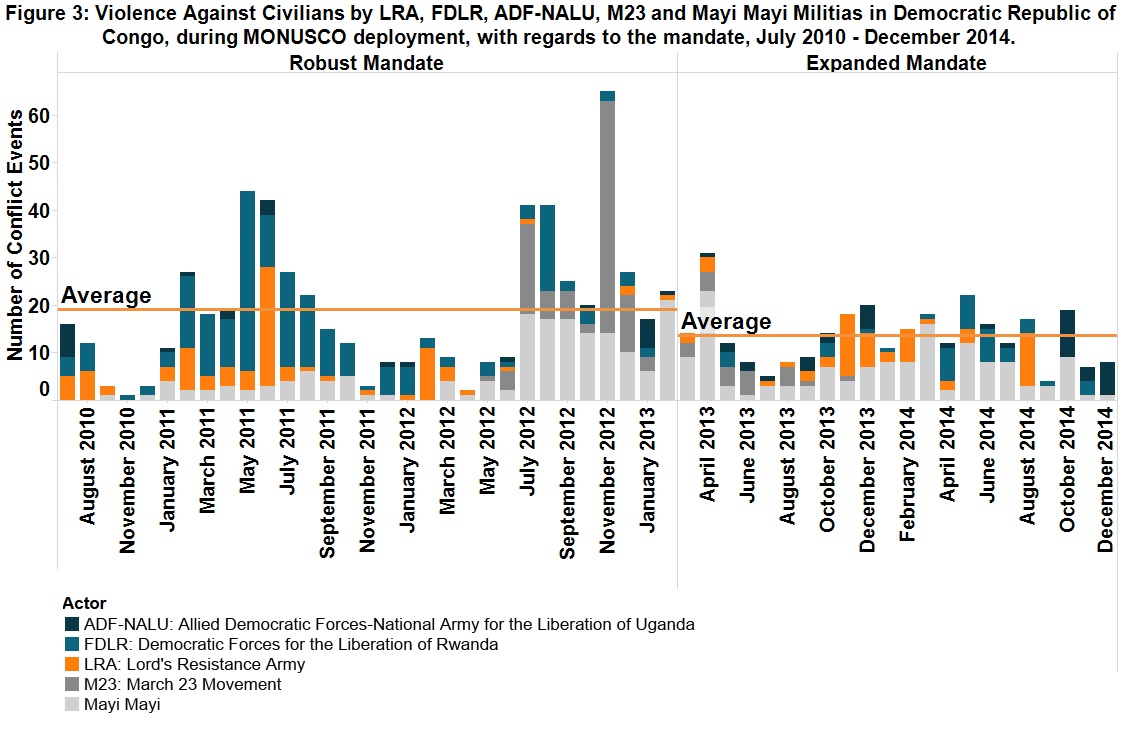 Conclusions
This special report aimed to analyse the effectiveness of peacekeeping missions in reducing levels of VAC. Overall, and in contrast with several other studies (Hultman et al., 2013; Kathman and Wood, 2014), data do not suggest that peacekeepers uniformly and significantly reduce the levels of VAC during deployment. This might be attributable to different methodological approaches: other studies consider anti-civilian violence only if the incident in question resulted in at least one fatality. The ACLED dataset has a broader conception of VAC as low-intensity violent conflicts still produce VAC, even if there are no reported fatalities.
Secondly, the findings suggest that robust mandates appear to be insufficient measures to prevent anti-civilian violence in the most intense conflict situations. In spite of the mandating of the use of force by “all means necessary,” failures have continued to occur: the Darfur crisis and recurring massacres in DR-Congo during MONUC deployment testify to recurring obstacles to PoC. These findings indicate that reducing levels of VAC may instead require comprehensive peace agreements with warring parties, rather than robust mandates alone.
Finally, expanded mandates, which explicitly name the target, do appear to support effective reduction in levels of VAC, but only if armed groups also experience difficulty in accessing funding, as was the case in DR-Congo and Sierra Leone. Taken together, these findings suggest that the context of implementation matters as much, if not more so, than the content of the mandate itself.