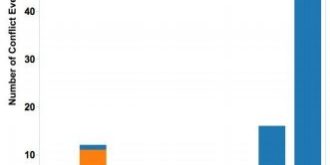 Universities were centres of political protest throughout 2015, with students at the University of Cape Town demonstrating against the university’s statue of Cecil Rhodes in the highly publicised ‘Rhodes Must Fall’ campaign; and students at Stellenbosch University demanding that lectures be taught in English rather than Afrikaans under the banner ‘Open Stellenbosch’ (Rhodes Must Fall, 2015; Shabangu, 28 August 2015). Both movements function as expressions of the frustration that many young South Africans, including the ‘Born Free’ generation, feel with the current political arrangement in the country.

‘Rhodes Must Fall’ and ‘Open Stellenbosch’ are primarily concerned with attacking the remnants of the colonial and apartheid era that remain in the public domain.

In contrast, the demands made during the recent demonstrations have been largely economic in nature. University fees have increased repeatedly and the recent protests were sparked by some universities proposing rises of more than 10%: close to twice the rate of inflation (Hall, 29 October 2015).

Furthermore, the National Student Financial Aid Scheme (NSFAS) announced at the beginning of the academic year that there are not sufficient funds to support all qualifying students, leaving an estimated 20,000 without financial assistance (ibid.).

The demonstrations over fees have been dramatically more violent than the earlier protests over cultural icons and social transformation with the recent demonstrations involving more riots, clashes with police or security staff and violence against civilians (see Figure 1). 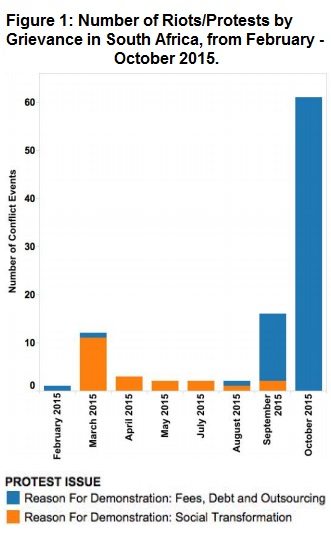 The reason for this may be the proven effectiveness of violence in service-delivery riots. Demonstrators often resort to destructive tactics after peaceful protest has failed to win the attention of the authorities. Increasingly, dissatisfied groups in South Africa see such tactics as the only method of ensuring that they are not ignored by the government (Mudzuli, 5 February 2015).

The use of violence by student demonstrators has proven effective. Education Minister Blade Nzimande originally offered to impose a 6% cap on tuition fees, putting the increases roughly in line with inflation. The students refused the offer as insufficient and continued rioting forced President Zuma into announcing that there would be no increases in university tuition fees for the next academic year (BBC News, 23 October 2015).

This announcement has not ended the student protests but rather signalled to the protesters the power they hold over central government. Students have continued to demonstrate and have upped their demands to include the cancelling of student debt and free education.