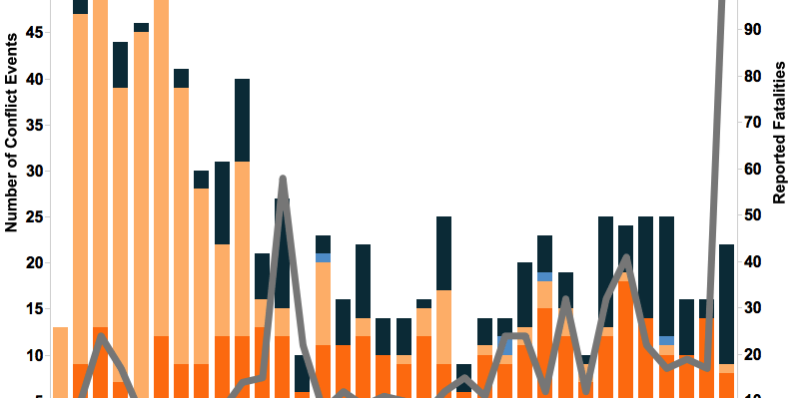 A new update of the recent unrest in Burundi, covering events from 26 April to 19 December 2015 has been released by ACLED. This update can be found here. These real-time data draw primarily on crowd-sourced information available from 2015Burundi as well as from ACLED’s weekly real-time conflict data release.

The week of December 7 saw the most fatalities by far so far in Burundi’s political crisis, as 127 people were killed. This is more than double the fatalities in the second deadliest week (July 6). In the early morning of December 11, heavily armed groups carried out coordinated attacks on military sites in Ngagara, Musaga and Mujejuru near the capital Bujumbura (BBC, 12 December 2015). At least 87 people were killed including four soldiers and four security officers; another 49 were captured. Clashes continued throughout the day in Nyakabiga and Kanyosha. Twenty bodies were found in Nyakabiga the following morning, all were shot in the head execution-style during police raids of suspected rebel households.

Similar clashes occurred on December 8 and 9, as armed groups and police fought in Burambi and Gicumbi in the southern district of Buriri. Five were killed and 11 captured. On December 12, demonstrators marched through Bujumbura under police protection to celebrate supposed military victories against armed rebels throughout the week.

Events from the week of December 7 generated strong reactions from international and regional actors. At a special session of the United Nations (UN) Human Rights Council in Geneva, UN High Commissioner for Human Rights Zeid Ra’ad Al Hussein stated: “The time for piecemeal responses and fiddling round the edges is over” (New York Times, 18 December 2015). Al Hussein recommended that pro-government militias be disarmed, asset freezes and travel bans imposed, and the country’s borders monitored to suppress the flow of weapons (New York Times, 18 December 2015).

The Human Rights Council unanimously backed a resolution calling for an investigation of abuses in the country, with ​a report of findings to be submitted in March 2016. The next day, the African Union Peace and Security Council approved the deployment of a 5,000-strong African Prevention and Protection Mission in Burundi (MAPROBU), with police and military regiments to be drawn from the Eastern Africa Standby Force. The peacekeepers are meant to coordinate with the UN special envoy Jamal Benomar and the Government of Burundi (United States Mission to the United Nations, 19 December 2015). This will prove challenging, as President Nkrunziza’s spokesperson stated that the mission is merely a European Union-led plan to disturb the peace (Foreign Policy, 18 December 2015).

While the week of December 14 was eventful in regional and international peacekeeping organizations, it was quiet with respect to local conflict. Only searches and arrests were reported in Bujumbura and Makamba communes. Estimates of total fatalities since the crisis began on April 26 range from at least 240 people (BBC, 12 December 2015) to well over 400 (Foreign Policy, 18 December 2015). ACLED data puts this number at 668 reported fatalities (covering events through December 19) based on information from both media sources as well as crowd-sourced information. 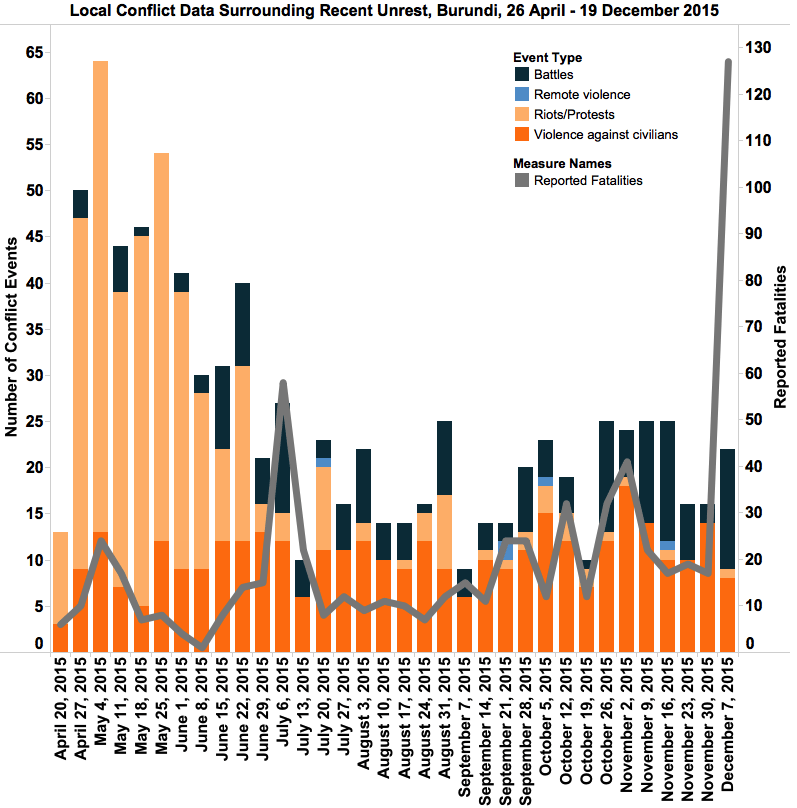