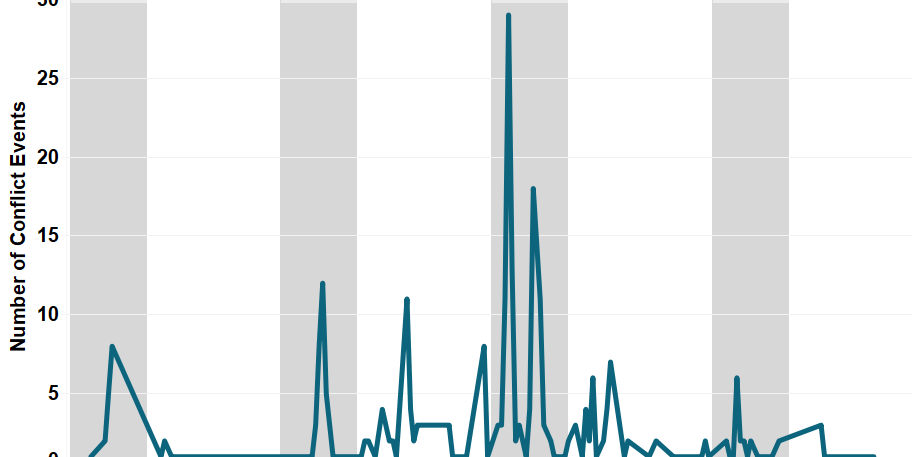 Pro-government militias (hereafter PGMs) are political, armed organizations that assist regime and state elites through the practice of illicit violence. They are designed to perpetuate conflict for purposes that conform to regime agendas, and their existence can shed light on power struggles and competition within African institutions. These groups are a large and diverse community who often defy simple categorization, yet they present a serious threat because of support they receive from state elites and a political culture that allows for unaccountable violent agents and actions. State elite sponsorship results in impunity for engaging in violent competition on behalf of those elites.

A new working paper by Raleigh and Kishi considers the contexts in which PGMs emerge and their functions within unstable contexts. PGM activities in Africa are likely to increase in the future, as political environments of high-level violent competition expand across the continent.

The new working paper introduces PGM-Set, an extensive roster of PGM groups with direct and indirect alliances to state power in Africa, and an associated methodology for determining what distinguishes these groups from others. It is based on conflict events by groups in the ACLED dataset. PGMs are defined as groups with either a political link to the regime or President, an allied association with state forces, and/or a regional or ethnic tie to the regime or President.

While PGM use is widespread, it is particularly common during election periods in classic competitive political environments. While elections can be a testament to the participatory nature of democracies, many new democracies depend on violence to build electoral influences, especially as violence is a product of political competition itself (Mueller, 2008). Violence can be used prior to an election to win, and occur in the post-election period in response to outcomes. We use Kenya as an example of how and under what conditions PGM use by a regime occurs during contested elections. 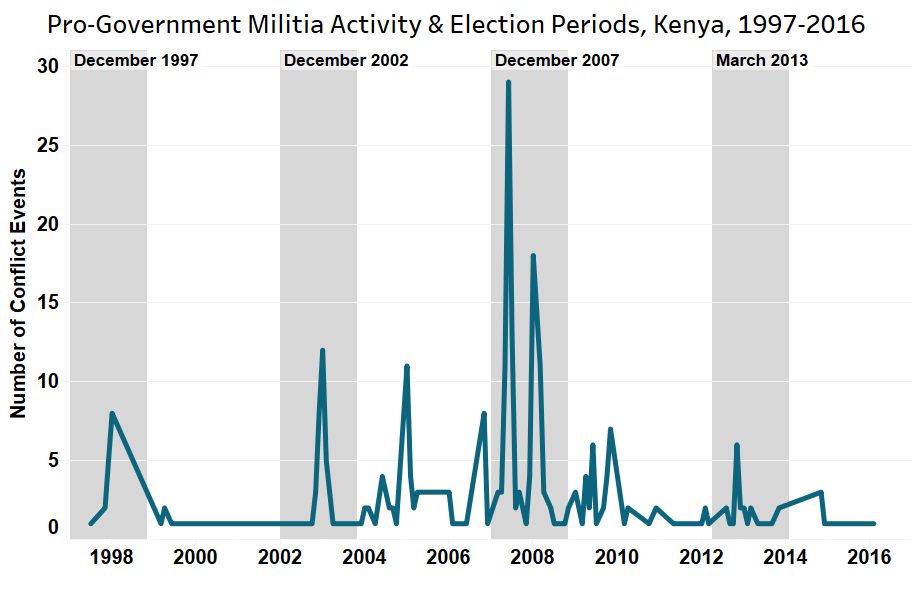 There are several reasons as to why some elections are violent while others are not, and why some include PGMs while others do not. Unclear and not credible election results can be a factor. Such a case occurred in December 2007 election in Kenya: after the closest election in Kenya’s history (McCrummen, 31 December 2007), the incumbent President Kibaki was declared the winner of the election over candidate Raila Odinga, despite claims of vote-rigging, and very little transparency. Problems were exacerbated as Kenya’s political system grants almost all power to the president – the same person accused of ‘stealing the election’. 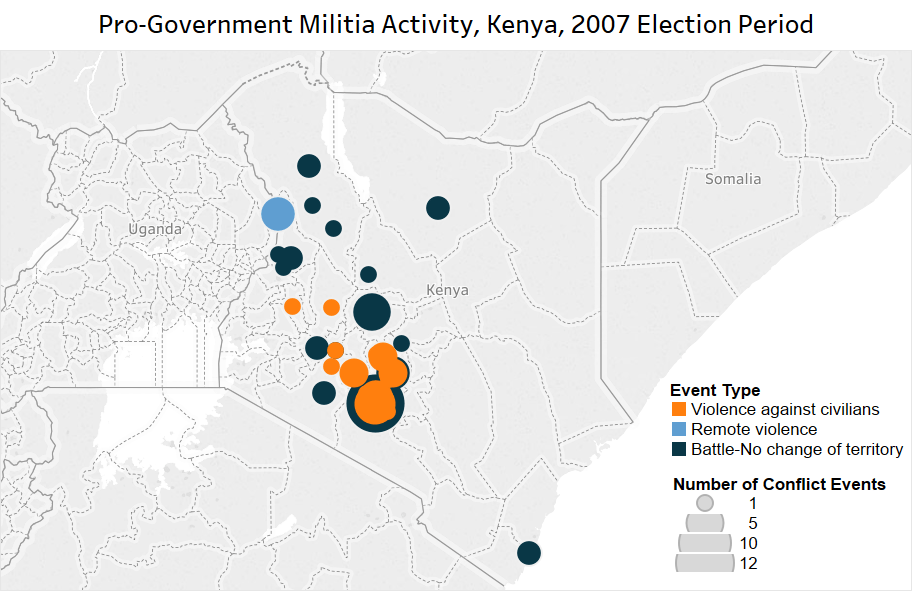 “A system where the winner ‘takes all’” can also contribute to electoral violence (The Atlantic, 2013). This can be especially problematic in cases where political parties align with ethnic groups and shape patronage politics. Under such circumstances, ‘zero-sum ethnic politics’ may be at play – meaning that a win for one political party or ethnic group means a ‘loss’ for other groups, as they do not stand to gain much benefit within the clientelistic system (Mueller, 2011). This is evident in Kenya, where presidential candidates campaign along ethnic lines, and some ethnic groups swear to only vote for candidates of their ethno-regional group (The Economist, 2013). The new constitution of 2010 altered key facets of ethno-political voting and made ‘grand coalitions’ of ethno-regional communities more likely.

In cases where “a precedent of violence proved effective,” there may be a heightened risk of future electoral violence (The Atlantic, 2013). The use of hired gangs and militias to influence elections results has a history in Kenya; in these contexts, violence used to intimidate people into not voting aided in ‘securing’ a close election for a political candidate or party (Mueller, 2011; The Atlantic, 2013). Most commonly, however, electoral violence is seen when a leader believes an election may unseat them or their party from power. In cases where a leader faces few constraints on their power and authority, these elites may incite violence (Hafner-Burton et al., 2014). This is why electoral violence is seldom seen in the most repressive and least democratic regimes – such as in North Korea where electoral competition is all but non-existent as no opposition candidates ever appear on the ballot – as the risk of losing the election is negligent (Hafner-Burton et al., 2014).

As the August 2017 elections in Kenya near, will we see a spike in electoral violence again involving PGMs? Some signs of violence have occurred around registration, candidate selection and primary abnormalities (ISS, 17 June 2016), as well as worries regarding “the ability of Kenya police to respond effectively and lawfully should violence occur before, during, or after the 2017 elections” (Human Rights Watch, 2017). “The lead-up to this year’s contest has been characterized by discord over the electoral rules and the impartiality of the electoral commission” (Bloomberg, 15 March 2017).

However, in that light, “both sides have made moves towards cooperation. In response to increased riots and a worsening security situation, the government agreed to engage in dialogue with opposition principals – mainly [with Raila Odinga’s Coalition for Reforms and Democracy]. And in response to intense criticism from Odinga and his supporters about corruption and election rigging, the entire board of the country’s Independent Electoral and Boundaries Commission resigned and has been replaced by members from both sides – an action that has helped legitimize the government’s efforts to bring transparency to the electoral process and has improved the CORD’s position as the main opposition” (Brookings, 30 January 2017). Given these steps, electoral violence, especially at rates seen surrounding the 2007 election, seems less likely this election period.