Democratic Republic of Congo – May 2017 Update 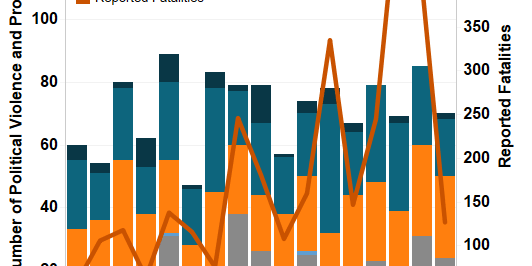 Although the number of conflict events in DR-Congo stayed relatively level in May 2016, a dramatic drop in fatalities was recorded compared to the highs of March and April (see Figure 1). This coincided with a considerable drop in the number of events involving the Kamwina Nsapu (KN) militia in May 2017 as compared to March and April, which had three and four times more events involving the group respectively. Given that roughly half of all high-fatality events (defined as resulting in 10 or more fatalities) from March and April involved the KN militia, a clear correlation can be drawn between the decreased activity of the militia and the drop in fatalities. At the same time, simmering tensions between the government and the Bunda Dia Kongo (BDK) politico-religious movement also ignited in May 2017, resulting in the event with the month’s highest reported fatalities. 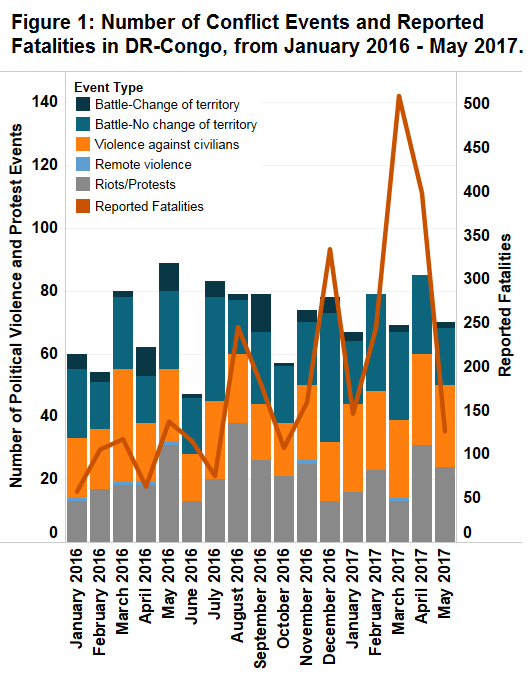 There are at least two dynamics which could explain this evolution of the conflict with the KN militia. The first is the potential degradation of the group’s operational capabilities. This is backed up by the high numbers of militiamen reported killed per event by the security forces, particularly in late April, as well as the surrender of as many as 100 militia members recorded by ACLED in the same month. On the other hand, the Congolese government also acceded to two key demands of the militia in April by returning the body of Kamwina Nsapu, the traditional chief and namesake of the militia, and recognizing his successor, Jacuqes Kabeya Ntumba, as customary chief (VOA News, 17 April 2017). Despite the considerable violence which has been witnessed across the Kasai region since the beginning of the conflict between the KN militia and the government, these attempts to resolve two major factors which initially catalyzed the fighting suggest a willingness by the government to engage in serious reconciliation.

However, against the backdrop of a relative lull in the KN rebellion, renewed tensions with another group opposed to the central government, the BDK, have come into even greater relief. The BDK is a politico-religious movement associated with the Kongo ethnic group which supports the establishment of a state for the Kongo people (IBT, 22 February 2017). Following several clashes and the killing of a number of BDK members by the security forces in 2007 and 2008, the group was banned by the Congolese government (ISS, 14 April 2008). Since then it had not appeared in ACLED’s coding until late January 2017 when clashes broke out between BDK members and the police in the Kimpese area after police officials refused to return the body of one of their leaders who had allegedly been murdered (Radio Okapi, 3 February 2017). Following these clashes, in mid-February police surrounded the house of the BDK leader, Ne Muanda Nsemi, in the Ma Campagne area of Kinshasa, resulting in a two-week stand-off with his supporters, during which at least 6 BDK members were killed, before the police succeeded in negotiating his surrender (Reuters, 4 March 2017).

Since the arrest, BDK activity had fallen off completely until mid-May 2017 when a number of BDK supporters attacked the Makala prison in Kinshasa. During the attack at least 50 inmates, although some sources had the number in the thousands (New York Times, 19 May 2017), were freed from the Makala prison by BDK members, including their leader Nsemi. Reports also claimed that between several dozen to as many as 100 people were killed in the violence (BBC, 18 May 2017). With the KN conflict seeming to have been quelled at least for the time being, this prison break engineered by the BDK creates a dangerous potential for a new anti-government conflict to take its place.