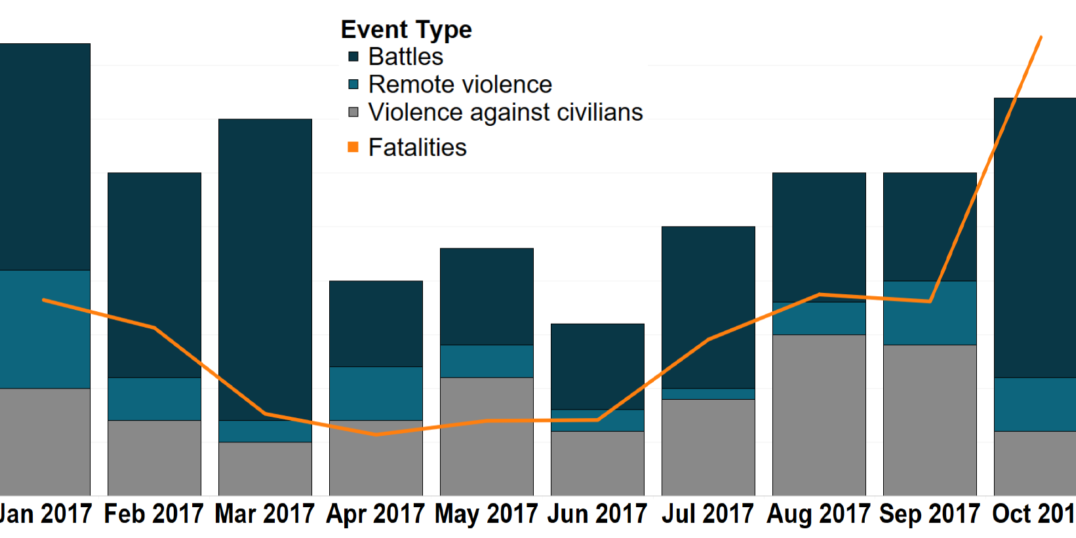 Violent activity in Nigeria continues to be active on two major fronts. Military forces have opened a substantial air campaign against Boko Haram in the north-east and Fulani militia violence remains frequent in the country’s middle belt.

Though Boko Haram was largely dislodged from their base of operations in Sambisa Forest in late 2016, the group continues to carry out small-scale suicide bombings against predominately civilian targets in rural villages and displacement camps of Borno State. Military offensives throughout September and October 2017 have been considerable. Relying heavily on newly leased attack helicopters (Defence Web, 12 January 2017) air forces have recently conducted a number of air strikes in the north-east, causing fatalities to reach a year high in October (see Figure 1). Pleased with early successes, the government recently purchased additional attack aircraft from a number of countries, among them the United States and the Russian Federation. (Sahara Reporters, 25 September 2017). Moreover, several high-profile targets have been killed or captured by security forces. The wife of Boko Haram leader Abubakar Shekau was targeted in an air strike on Konduga Local Government Area on 19 October (Sahara Reporters, 25 October 2017) and Idris Ibrahim Babawo, a top level Shekau lieutenant was arrested in Ondo State on 24 September (Sahara Reporters, 26 September 2017). The September-October offensives have yielded measureable effects on the already weakened Boko Haram apparatus. A number of intelligence reports have indicated a large number of Boko Haram fighters have fled to Adamawa State to avoid the Borno military saturation. The governor of Adamawa has deployed security forces into Madagali to limit possible attacks in the vicinity (This Day, 27 October 2017).

Events involving Fulani nomads continue to be the main cause of conflict in the country’s middle region. Hastened by the area’s agricultural developments, attacks in the later months of the year are largely attributed to dry-seasonal movements southward and competition for grasslands (Raddington Report, 10 October 2017). The Fulani have historically been at odds against the Tiv and Otukpa communities of Benue State. Notable violence in the recent period have occurred in a series of battles with Irigwe militia as well as a large multi-day attack on civilians in the Bassa area of Plateau State (Sahara Reporters, 27 October 2017). Local level governments have imposed a number of measures to curb violence, typically imposing extended curfews on heavily affected areas. More stringent methods have been attempted in the recent period. The Benue State government implemented an ‘anti-grazing’ law on 31 October to discourage further attacks (Vanguard, 3 November 2017). The law quickly caused Fulani exodus, leading the Taraba State government to consider similar legislation for 2018 (Daily Post, 2 November 2017).