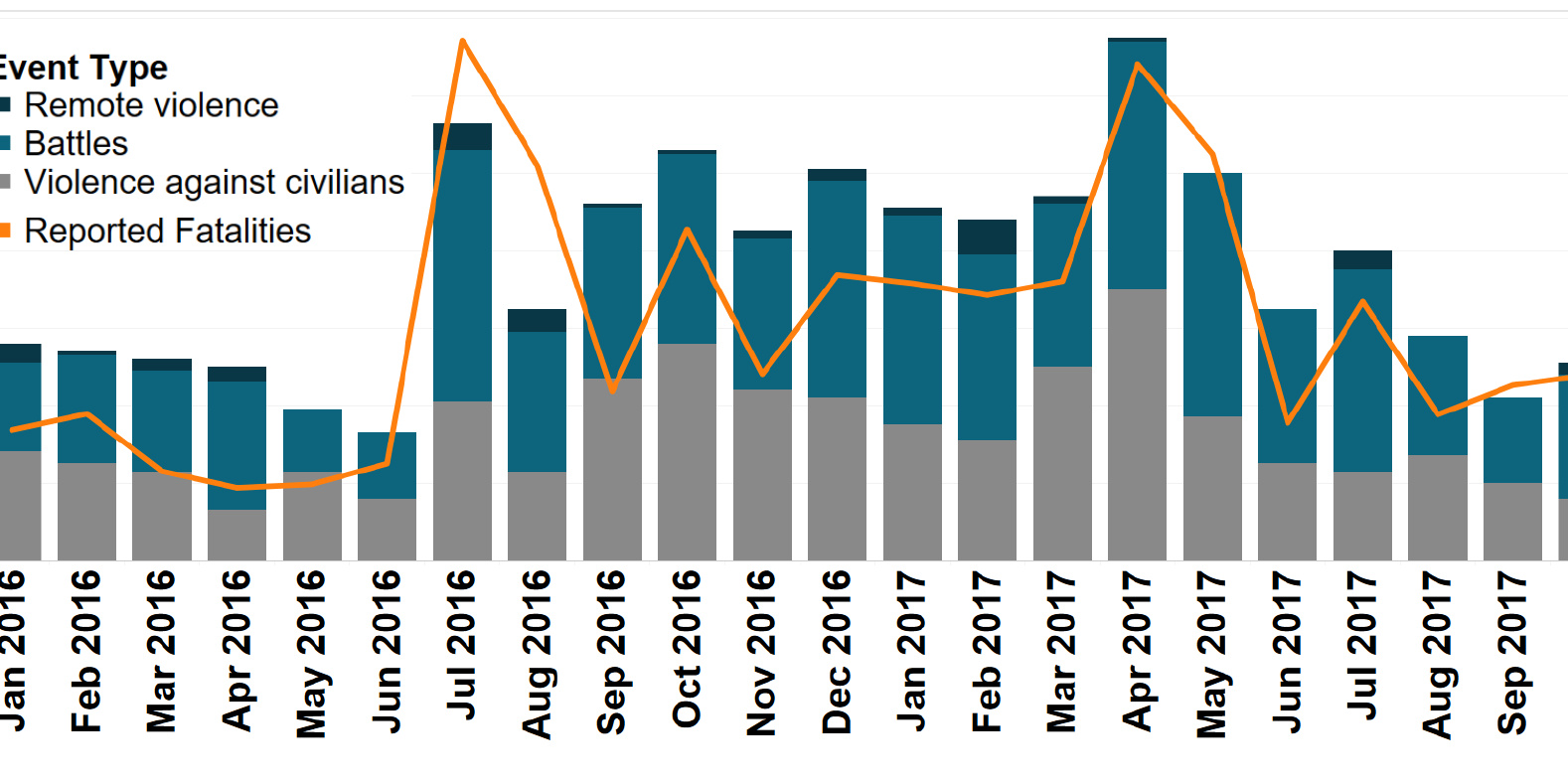 Conflict activity in South Sudan reduced by half between May and October, confirming the trends outlined in ACLED’s last update on the conflict (ACLED, June 2017). Violence has resumed to affect all parts of the country and as we approach the end of the rainy season, conflict levels have started to rise again (see Figure 1). Not only is this a relatively common pattern in South Sudan, but that political violence drastically decreases during the rainy season should be a check on those who suggest that climate change affects the timing of conflict patterns moreso than strategy.

Despite declaring a unilateral ceasefire in May, the government launched key military operations throughout July to regain control of the rebel Sudan People’s Liberation Army-In Opposition (SPLA-IO) headquarters in Pagak in Upper Nile. The SPLA ultimately recaptured Pagak on 6 August but SPLA-IO counter-offensives have continued since. The government also claimed to have regained all rebel areas in Jonglei after heavy offensives around Waat in October. The recent government operations came as a 30-day ultimatum expired on 30 September, after which the defence minister vowed to “crush” the remaining rebels (Radio Tamazuj, 29 August 2017). The SPLA-IO sustained its attacks on state forces in Greater Equatoria, making gains around Kaya in Morobo in August and at Ombasi in Yei early November. They also laid various ambushes on the roads around Maridi end October, leading to wider clashes in the area. The rebels also launched several offensives around oil fields in Unity, particularly in Rubkona and Koch, gaining control of Guit and Pakur in Rubkona in September and October respectively.

The visible divisions within pro-government and insurgent factions risk undermining the security situation further over the next months. First, discontent among the security forces over the government’s failure to pay their salaries amid economic hardship and food shortages has translated into rising levels of criminality. Fatal armed robberies have been regularly reported in Juba over the past few months, as well as looting and burning of civilian properties in agricultural areas. Second, there have been rising intra-Dinka tensions, dividing the government’s support base. Violence between Dinka communities has continued both in Aweil in Northern Bahr el Ghazal and in Warrap (President Kiir’s home state) since Kiir declared a state of emergency in these two states in July. Tensions are compounded by discontent over former army General Paul Malong’s house confinement by the government in Juba among his home community in Aweil and among the SPLA. This has led to defections. A new rebel front (SSPM/A: South Sudan Patriotic Movement/Army) also claimed several attacks and gains in the state between June and August, possibly in retaliation for Malong’s confinement. Thirdly, the SPLA-IO is constrained by increasing competition with new rebel fronts. The group clashed on several occasions with the National Salvation Front (NAS) in Central Equatoria after a number of defections, losing territory in Kajo-Keji mid-October. New fronts have also continued to form, underlining the lack of coherence within the insurgency movement.