The Iranian military has been involved in the Syrian conflict both directly and through proxy militias since 2013. Early estimates of Iranian troops in Syria numbered around 10,000, including members of the Iranian Army as well as the Iranian Revolutionary Guard Corps (IRGC). Iran’s political leadership has also been a vocal supporter of the Assad’s government in Syria, given their close relations after the Islamic revolution in 1979. Both politically and militarily, Iran’s strategy in Syria aims to consolidate and expand its regional position and to counter the Sunni influence of Saudi Arabia while avoiding a direct confrontation.

Analysis of ACLED data from January 2017 to the present show that, while Iranian activity has been reported in the majority of Syria’s provinces (see map above), Iranian military forces were only reportedly involved in a total of 66 events across this period. This is a very small number given the fact that the conflict has generated nearly 40,000 events; their geographic presence and the rhetoric of Iranian military influence in Syria all suggest that they would be more militarily active.
Of these 66 reported events, Iranian forces acted independently of other pro-regime groups in approximately 41% of events (see graphs below), with violent event activity divided evenly between remote violence and battles [1]. In the remaining 59% of events, Iranian forces accompanied other pro-regime forces, backing Syrian military forces in the majority of cases and engaging in over twice as many battles and a slightly higher number of remote violence events. 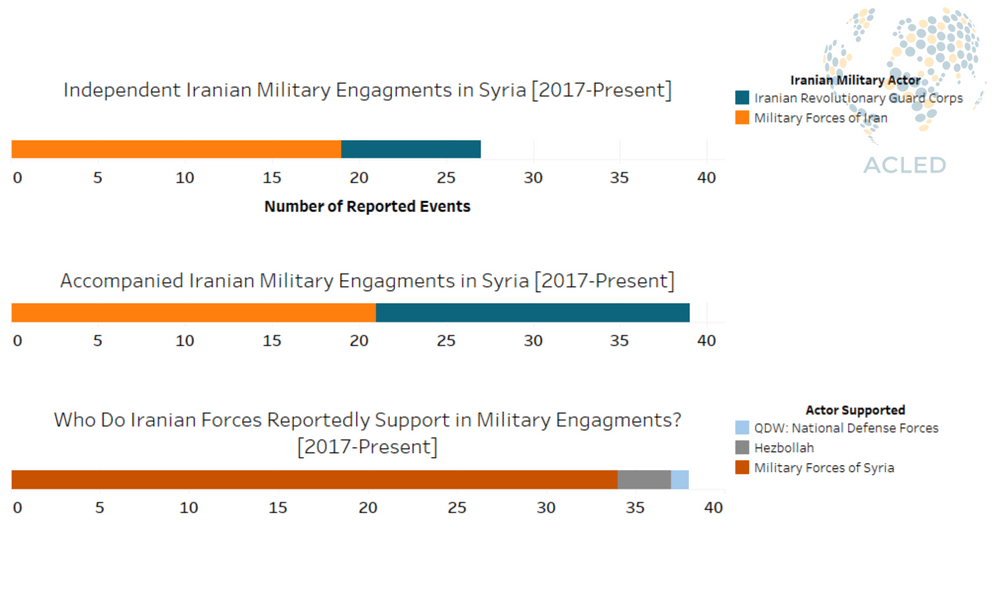 A likely explanation may be that Iran favors the use of non-state Shiite militias to achieve their goals in the country. Although, recent figures put the number of Iranian-backed pro-regime Shiite militia fighters in Syria around 20,000-30,000, Israel’s ambassador to the United Nations claimed that they influence as many as 80,000 militiamen.
Another factor could be the embeddedness of Iranian forces within allied forces, whether in reality, or due to reporting that fails to distinguish between the various allied forces and militias. This failure could also be a result of a deliberate regime attempt to mask Iranian involvement in order to maintain legitimacy in the eyes of the public; Syrian President Al Assad has denied the existence of Iranian bases and forces-aside from advisors-inside Syria’s territories, and Iran has only reported the deaths of some high-ranking officers.
Finally, the low number of Iranian activities may be the product of the increasing Russian involvement in Syria since their initial intervention in 2015. As Russia tries to lead both the military operations and political process, political analysts have suggested that Russia is attempting to sideline the Iranian influence in Syria. Some even propose that Russia’s lack of response to the escalated Israeli airstrikes against Iranian military targets in Syria, as well of reports of meetings with Israeli officials regarding limiting Iranian presence, indicates Russia’s aversion to seeing Iran increase its dominance in the country.
As the regime’s closest regional ally and an actor with much at stake in Syria and the region, Iran will surely seek to consolidate its foothold as the regime continues to regain territory. Whether acting independently, supporting other pro-regime actors, or backing proxy militias, analyzing Iranian military activity-or lack thereof- is key to piecing together its larger strategy in Syria and predicting the future of this complicated conflict.

[1] The remainder of events with Iranian involvement consist of strategic developments, such as the movement of Iranian forces into a new area or their involvement in agreements.

Bassel Heidar is a Middle East Research Assistant with ACLED. Part of the Syria Project, Mr. Heidar also holds a degree in Economics and is currently completing his Masters at Radboud University, Nijmegen, Netherlands. Bassel is fluent in English and Dutch, and he is an Arabic native speaker.